Though North Dakotans had been reluctant to see the United States enter the war, they accepted the reality and contributed as well or better than other states. On the home front, Americans were expected to buy war bonds, volunteer for the Red Cross, and conserve important food supplies that had to be saved for soldiers. 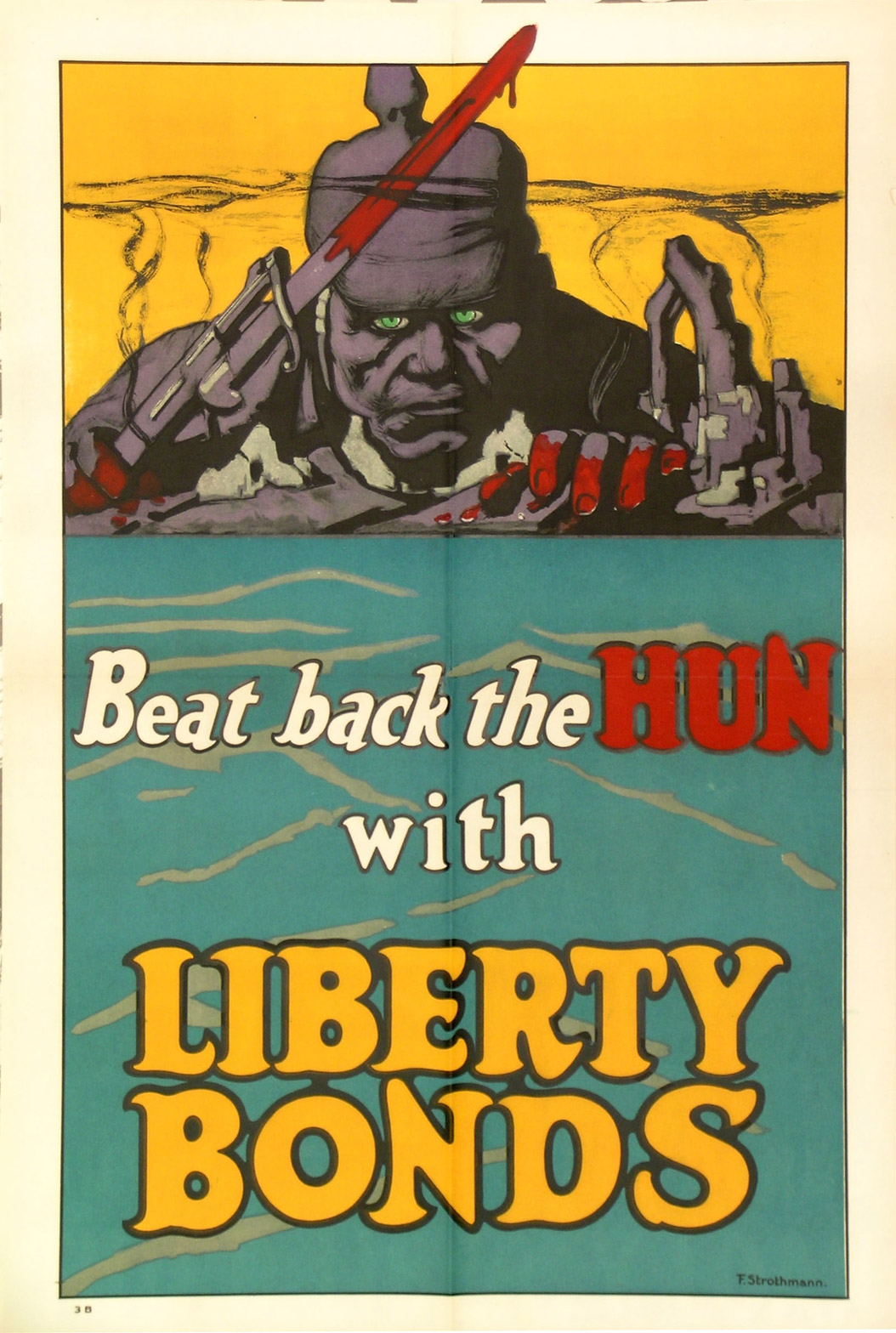 Image 23:  Posters such as this were used to help sell Liberty Bonds. The poster informs people that buy purchasing bonds they will keep the 'Hun,' or German soldiers from overrunning Europe. The federal government sold Liberty Bonds to finance the war effort. SHSND 10935-P004. 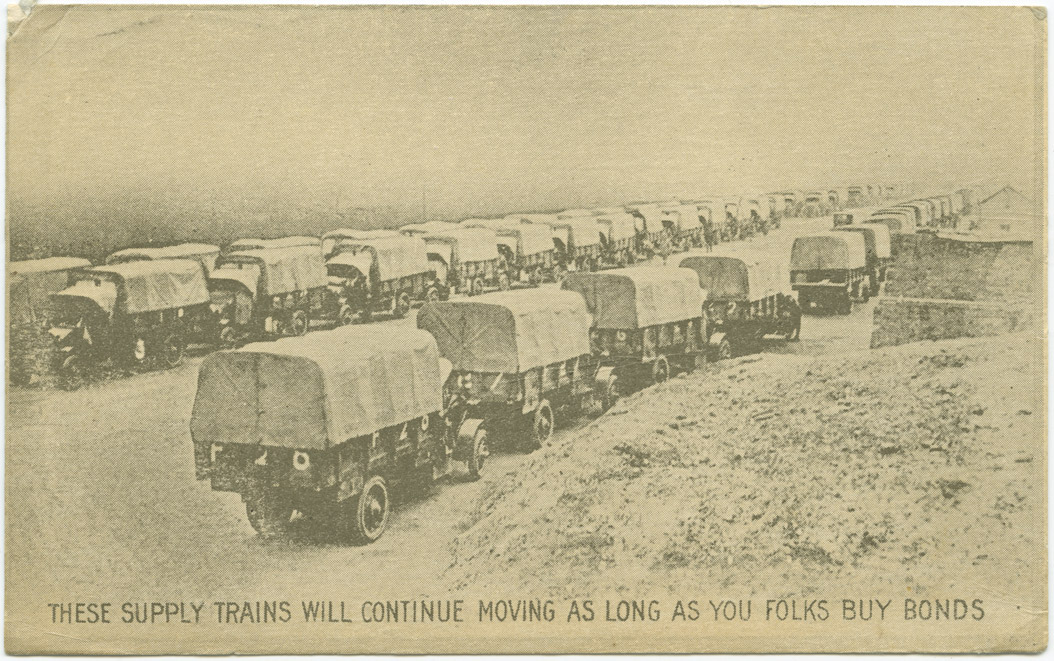 Image 22: The campaign to sell war bonds, or Liberty Bonds, used many images to encourage people to buy bonds. The caption of this photograph assures people that if they buy bonds, the trucks carrying supplies to soldiers on the front lines will get to their destination. Bonds were sold by “Four-Minute Men” who spoke (for four minutes) at every public gathering during the war. SHSND 11063-152. 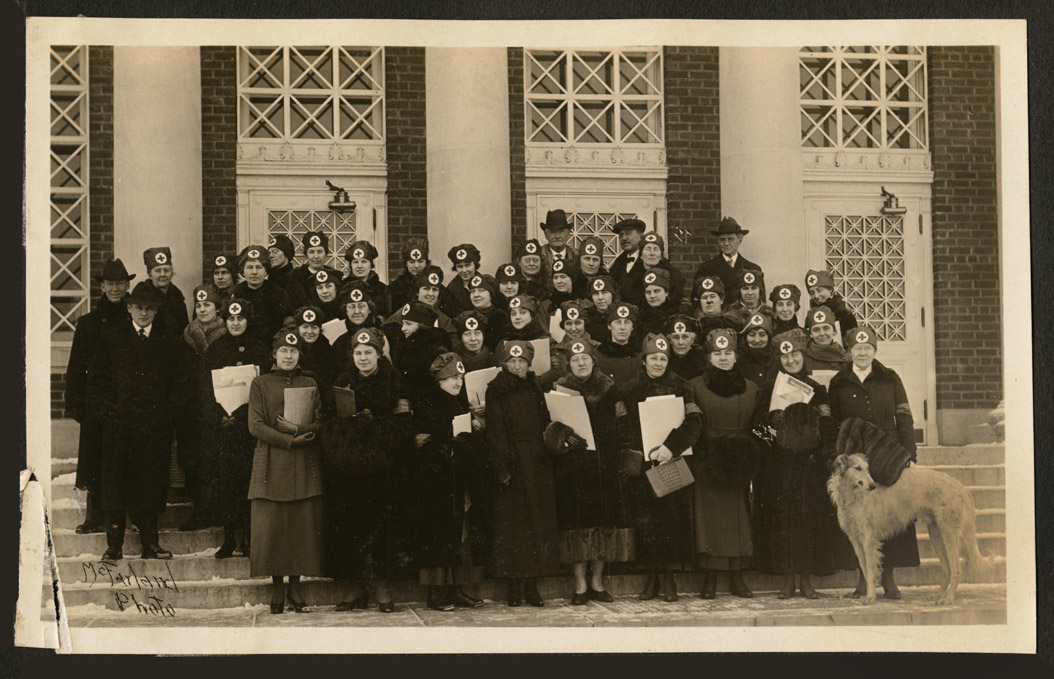 Image 24: On the home front, women and men in towns and rural communities worked for the Red Cross. This group at Valley City wear hats that identify them as volunteers for the Red Cross. North Dakota chapters of the Red Cross rolled bandages that were used to treat soldiers’ wounds. SHSND 0113-Bk4-121. 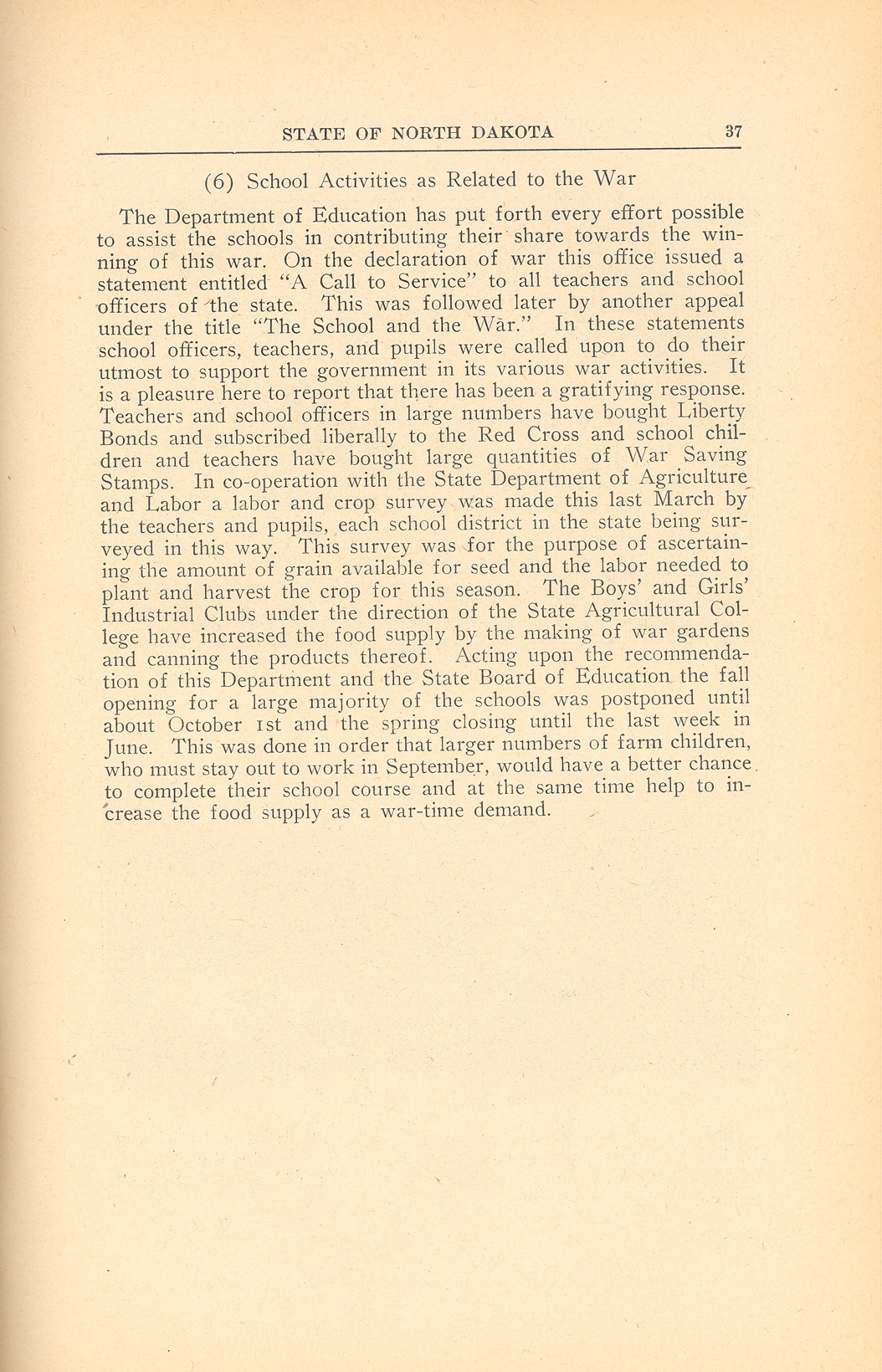 Document 3: The war effort reached every part of state life. The North Dakota Department of Public Instruction encouraged every school to contribute to the war effort by raising money for the Red Cross, arranging school schedules to allow children to help with harvest, by conducting a grain survey, and by encouraging teachers to purchase Liberty Bonds. SHSND Annual Report of the Superintendent of Public Instruction 1918. 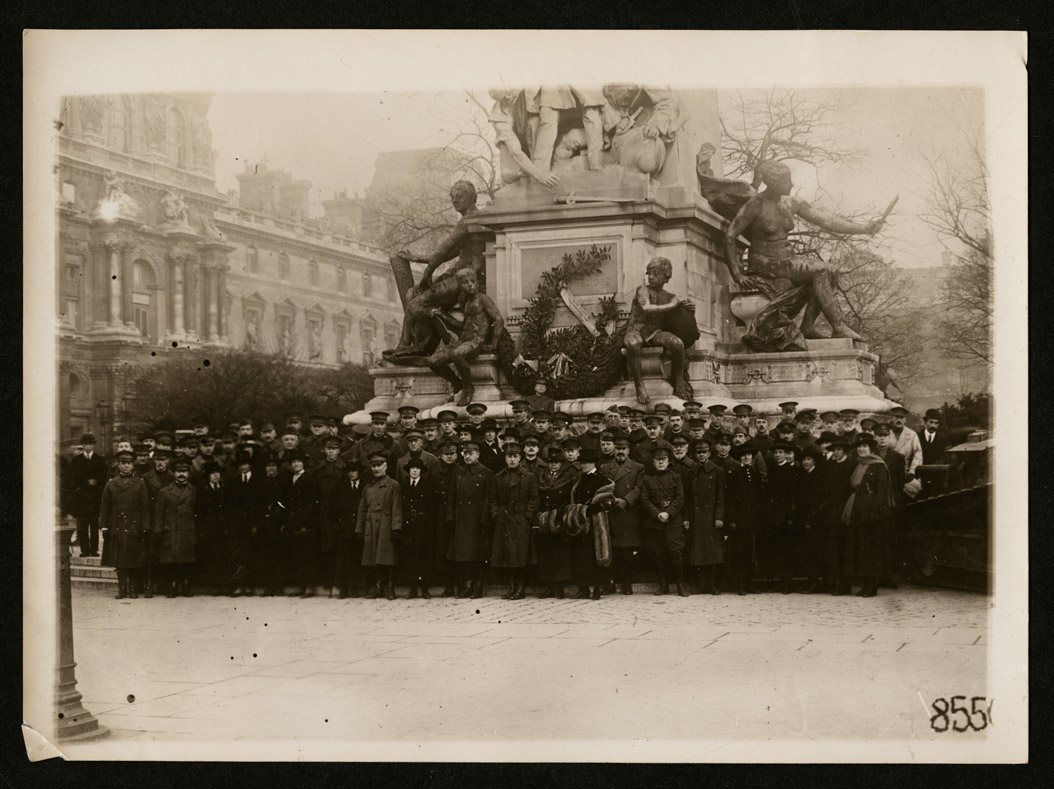 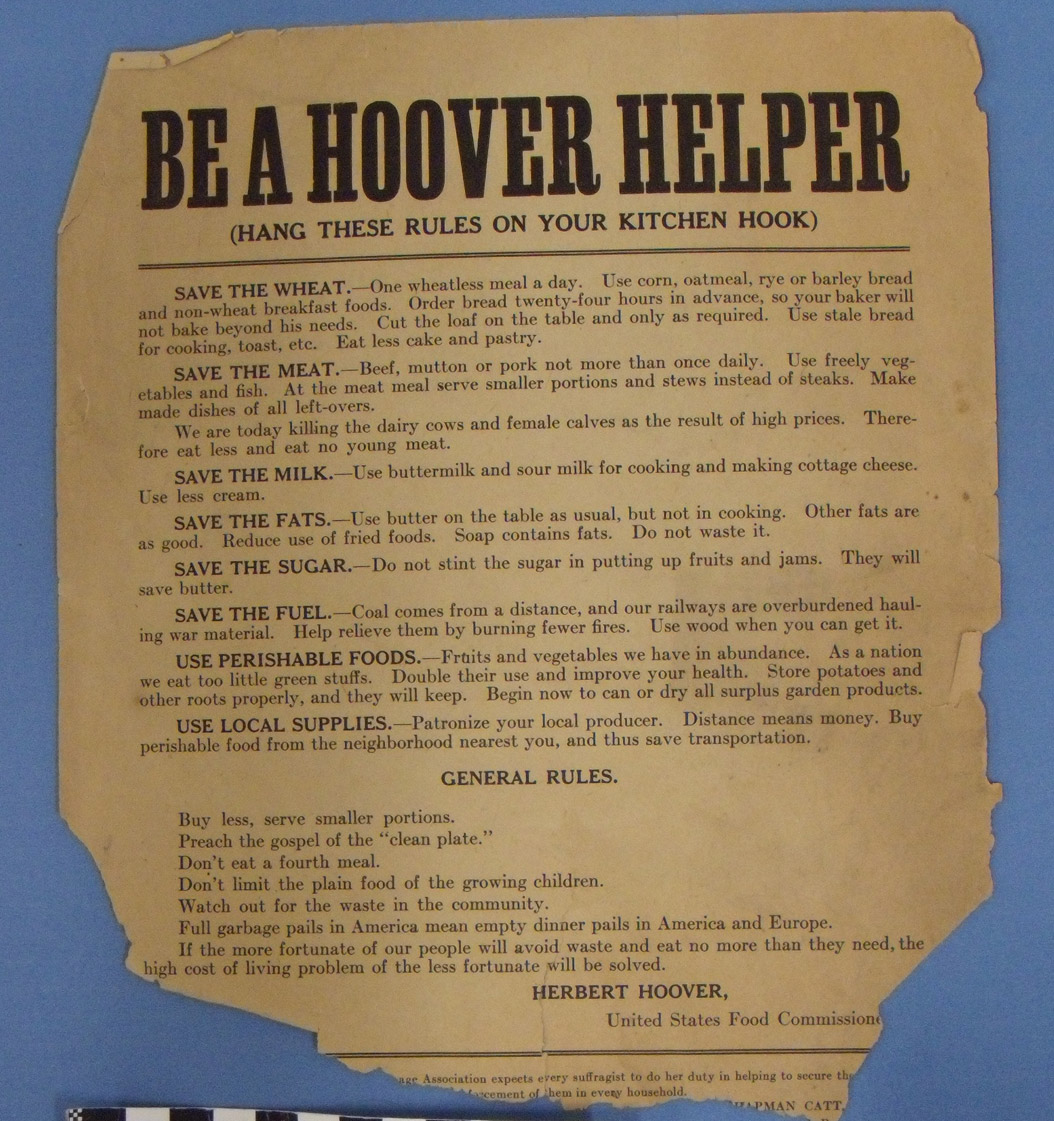 Document 4: Homemakers were encouraged to contribute to the war effort by reducing waste and conserving foods such as wheat and meat. Women were asked by Food Administrator Herbert Hoover to use perishable foods that could not be sent overseas to soldiers. 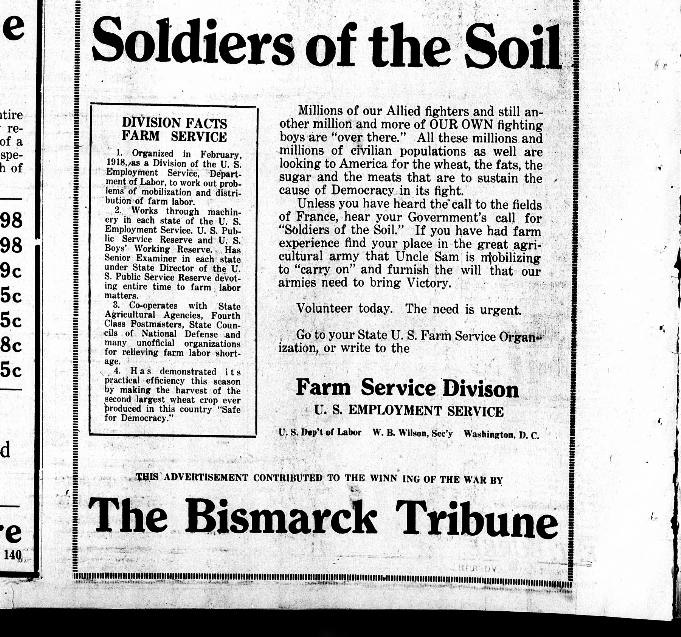 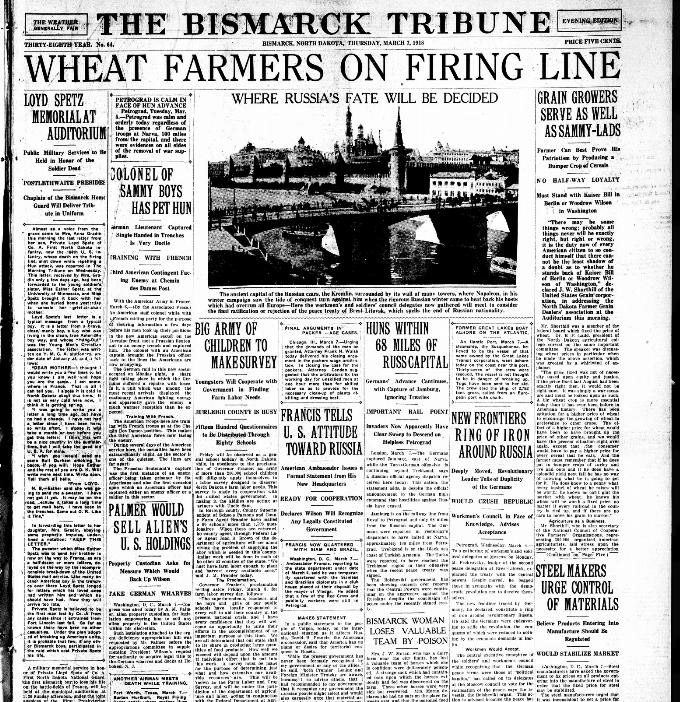 War bond sales were encouraged by “Four-Minute Men” who spoke (for four minutes) in theatres and rallies all over the state. North Dakotans bought $65,500,000 in war bonds. (See Image 22) Across the country, Americans bought 16% more bonds than was expected. However, in North Dakota, the five bond drives resulted in oversubscribing the bonds by 24%. (See Image 23)

The tensions between the Nonpartisan League (NPL) and its opponents stretched into a question of national loyalty. Some prominent Leaguers and German-Americans were questioned about their purchases of war bonds and donations to the Red Cross. Many had purchased war bonds; others considered it their right to withhold support for the war. However, the Red Cross of North Dakota announced that it considered the NPL “thoroughly disloyal” and refused to accept funds collected at NPL meetings.

The Red Cross was a partner with the federal government in supplying troops with medical supplies, food, and clothing. The North Dakota Red Cross volunteers rolled bandages to be used at military hospitals. Volunteers knitted socks and mittens for soldiers. (See Image 24) Local chapters of the Red Cross also raised money to fund hospitals near the war front. (See Image 25) Because schools were the social center of many rural communities and small towns, the Red Cross appealed to schools to contribute to the war effort. (See Document 3)

Women were specifically charged with managing their families’ food supply to conserve fats, wheat, and meat. Herbert Hoover (he became President of the United States in 1929) headed the U.S. Food Administration during the war. Hoover’s office sent out recipes for meatless or wheatless meals, and recommended that every home have a garden. (See Document 4)

Because farming was the most important occupation in North Dakota, many young men were exempt from military service in order to work on farms. Nevertheless, farmers had to make many concessions to the war. The price of wheat went up with increased demand, but Food Administrator Hoover limited the price of wheat to $2.20 per bushel when the market price was over $3.00. Farmers complained about the price limits, but also tried to make their farm practices more efficient by purchasing tractors which allowed them to farm more land with less labor. Though North Dakota was prepared to locate replacement hands for farms, there was little need to recruit urban people to work on North Dakota farms. (See Document 5 & 6) 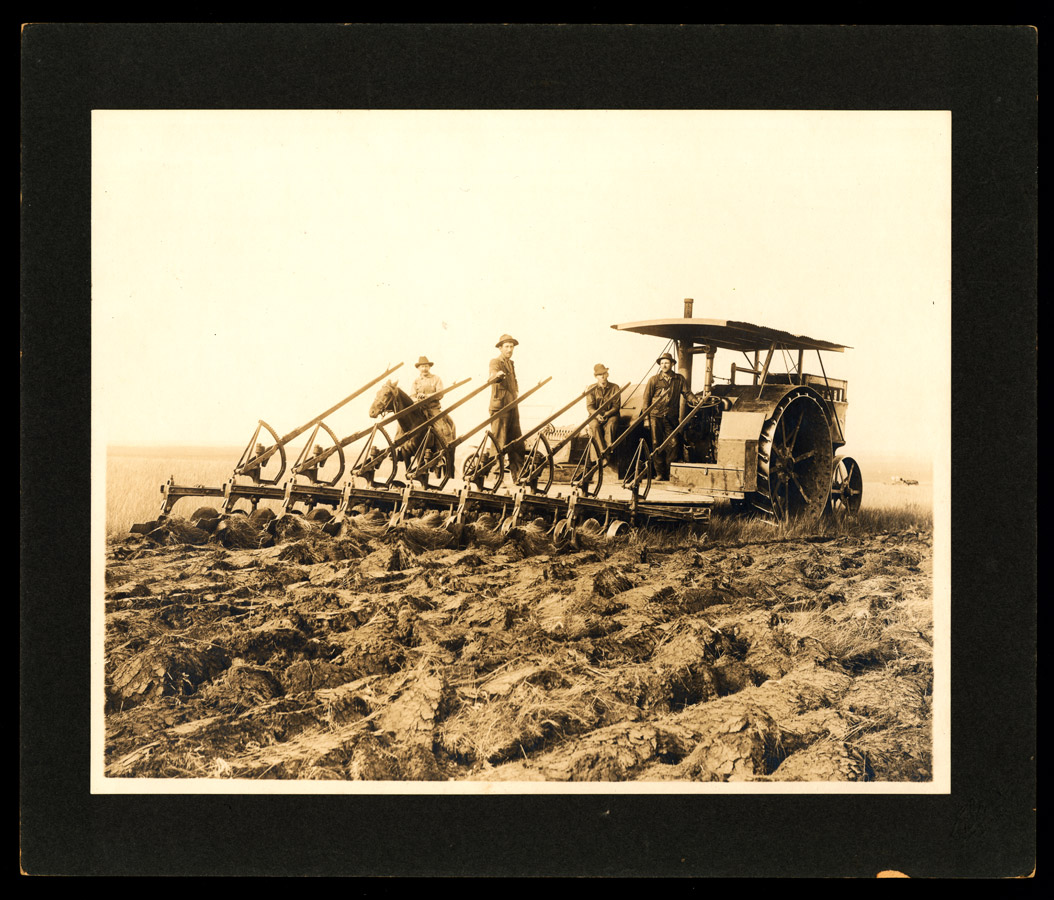 Image 26: Tractors such as this one helped farmers work more efficiently during the war. Many farmers bought their first tractor during World War I, though they had become available a few years earlier. SHSND 0387-004.

Farmers also suffered from drought during the war. Except for 1915, the war years saw little rain. Farmers had to sell cattle they could not feed and had little crop income to buy hay for their livestock. However, those who had a crop enjoyed the high war-time prices and often invested in more land and new machinery. (See Image 26) In 1920, however, the post-war economic depression set in and farm commodity prices crashed. North Dakota farmers entered an economic depression that lasted nearly 20 years.

Why is this important? World War I provided a major test for the United States ability to organize nationwide to fight an international war. North Dakotans responded well at every level after retreating from their isolationist views. Though the effort was marred by the continuing controversy over the question of loyalty of the members of the Nonpartisan League, individuals made significant contributions and sacrifices on the home front. The war effort showed the Nonpartisan League to be as loyal as any other organization in the United States.

Document 7. The End of the War

In September, 1918, Alma Munkeby left her farm home in Ransom County to go to Valley City where she expected to complete her senior year at Valley City Normal College (today known as Valley City State University.)  She was trying to earn her teaching certificate and wanted to specialize in Geography.

She arrived at VCN, as she called her school in her diary, just as the Spanish Influenza was becoming serious in North Dakota. And the World War (World War I) would soon come to an end.

Alma Munkeby kept a diary in a small notebook she had purchased at the Rexall Drug store. Most of her entries are about her studies and the social life in her college dormitory.

Alma’s entries concerning war-time activities on campus and the students’ response to Armistice are presented here with abbreviated transcriptions of important passages. The spelling and punctuation remain true to Alma’s writing style.

Thursday Oct 3 “came home and in the evening we went to movies at Normal. “North Dakota in World War.”  Quite good  25¢

Monday Oct. 7. “Winnie said my dad could afford to buy a liberty bond for all his children. Wish she would tend to her own business and daddy will tend to his. Made me hot I tell you. inquisitive little ________ _____” 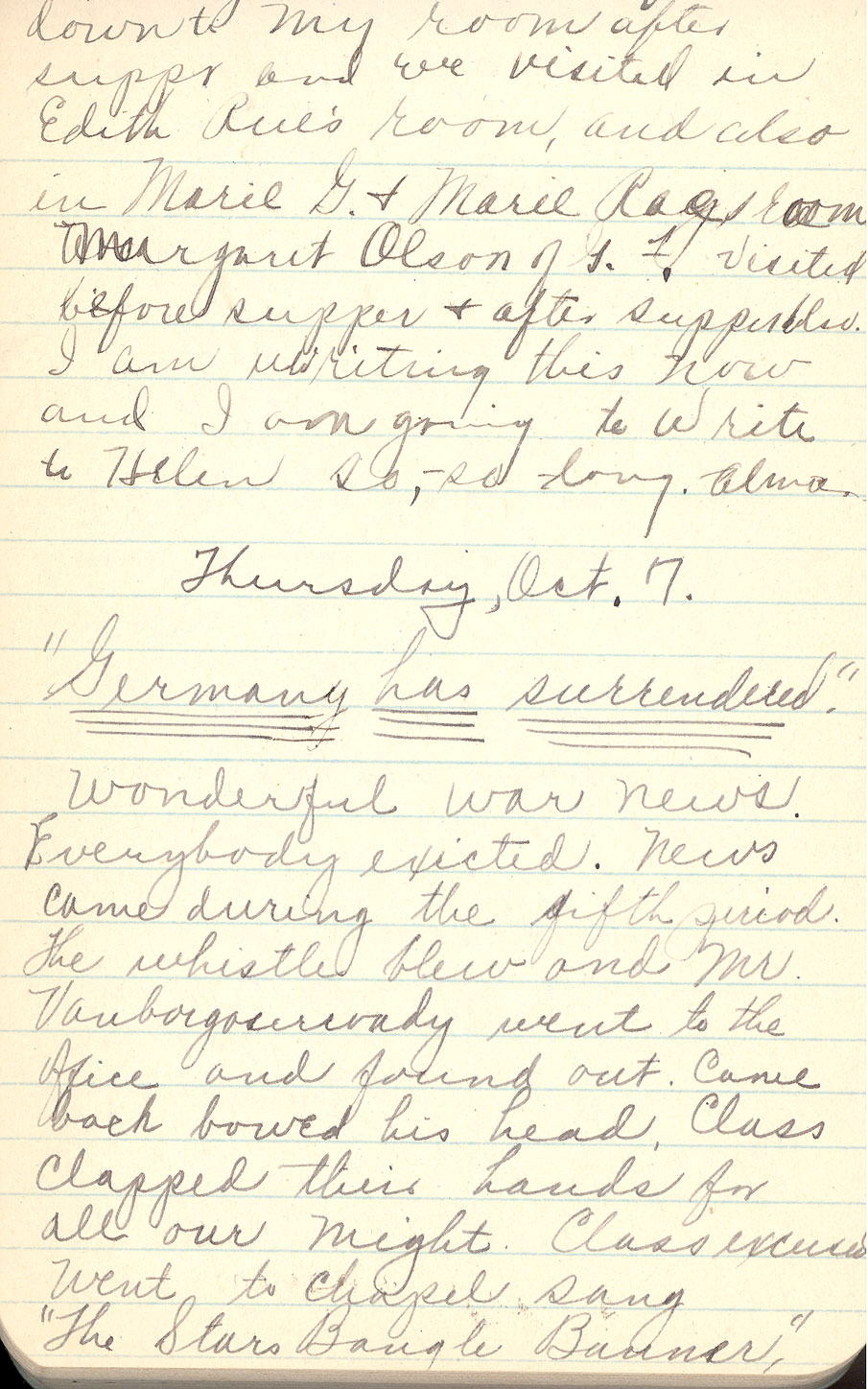 Thursday Oct 7 [Alma has mistaken the date. It was November 7, 1918]   “Germany has surrendered.”   Wonderful war news. Everybody excited. News came during the fifth period. The whistle blew and Dr. Vanborgosurady went to the office and found out. Came back bowed his head. Class clapped their hands for all our might. Class excused. Went to chapel sang “The Stars Bangle Banner” like it has never been sung before in chapel. We also sang “Marsellai” [The Marseillaise] French Loyalty song, and America with “God Save our Splendid Men/Send them safe home again, God save our Men.”  President gave a talk and then we went to classes again. All exceptionally excited.

Rumor came in the evening that it was not so but we believe it is.” 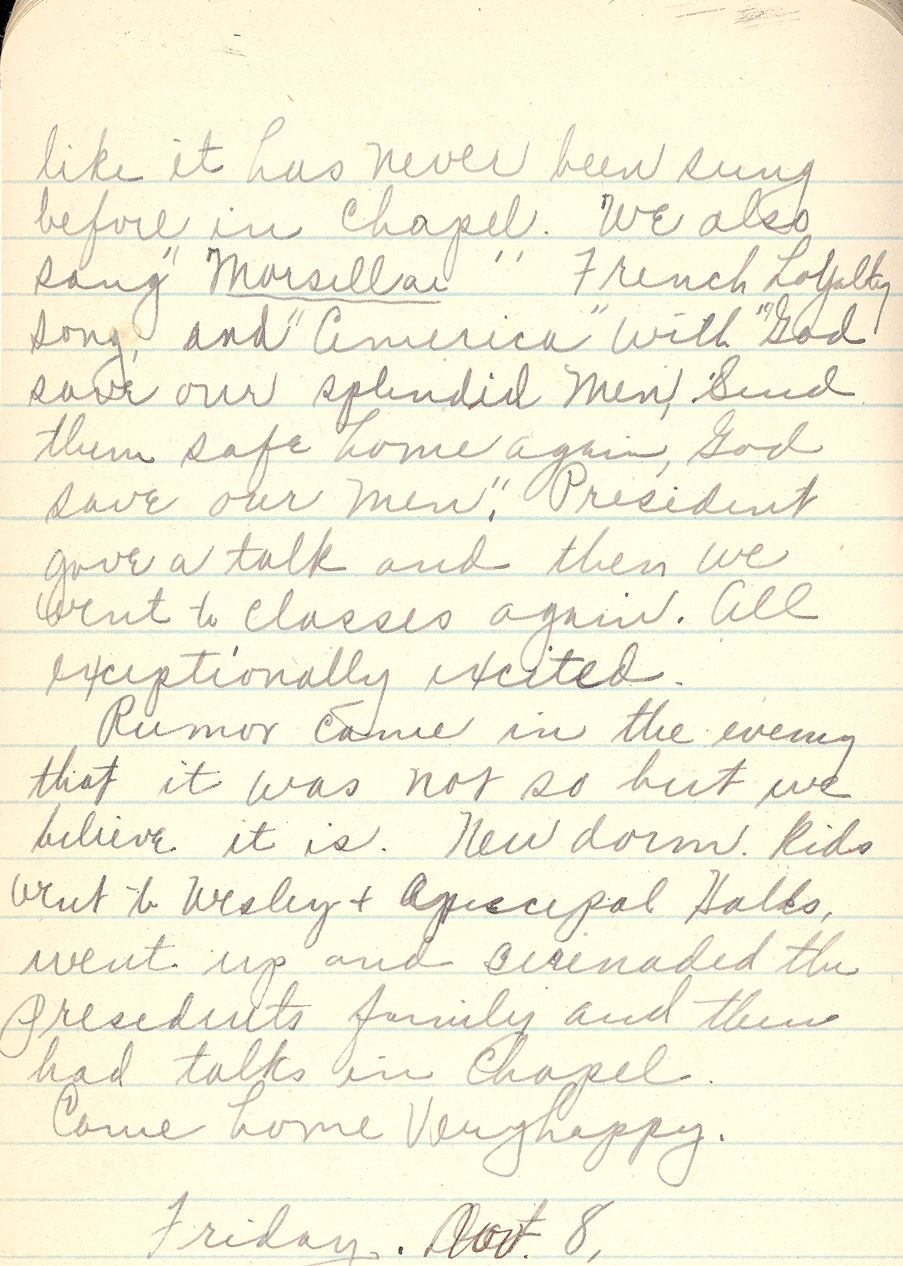 Monday Morning Nov. 11 “The Glorious War News Came” Germany has given up. We cheered and put up “Old Glory.”  Men came by cheering on a car with Old Glory floating on high. Grand and Glorious feeling. Boys Boys Boys will soon be home. World is safe in Democracy. 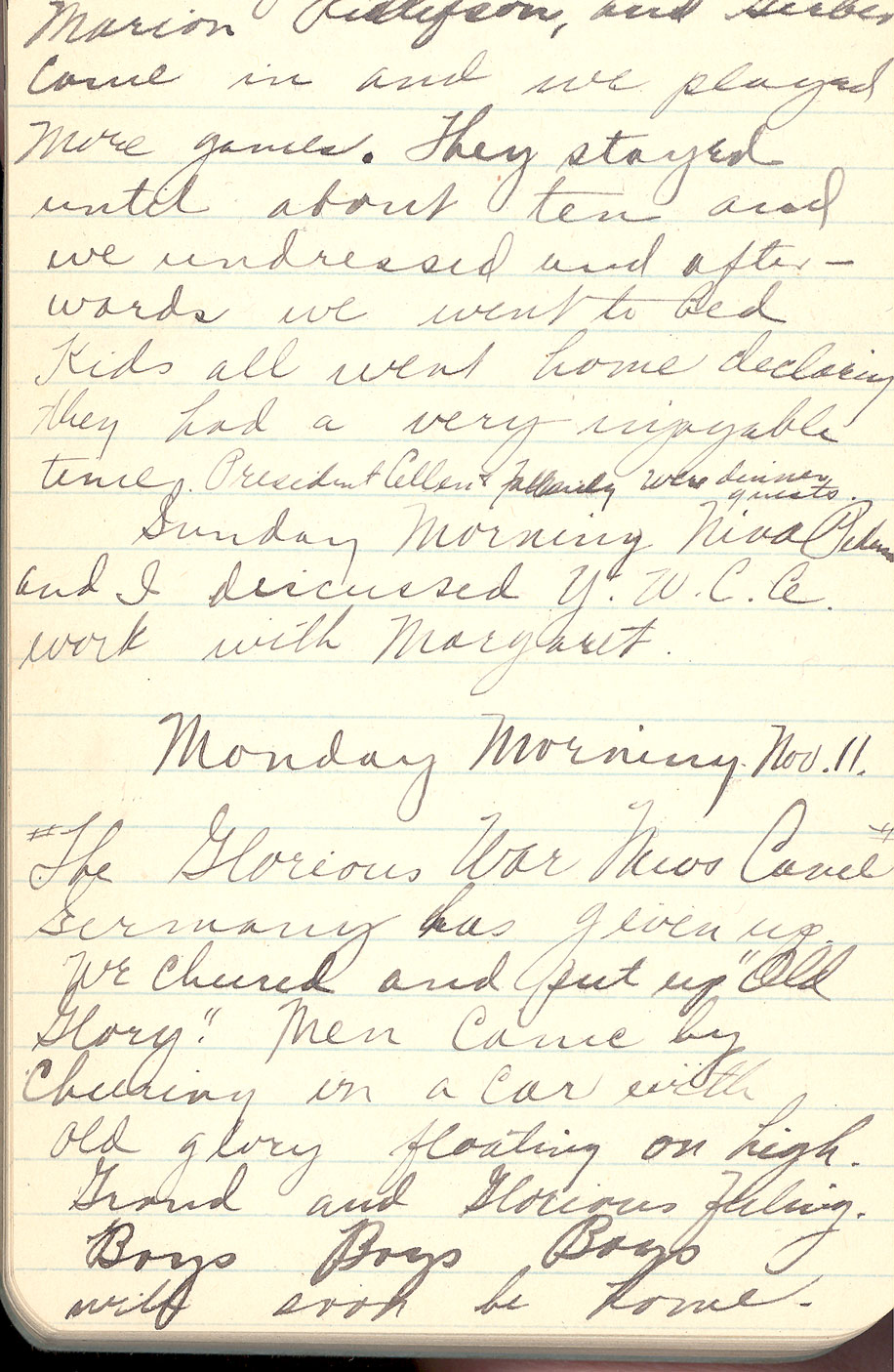 Wednesday Morning November 12. . . . “Today we pledge our final pledge to the United war relief fund. Hope we will come up to our expectations.” 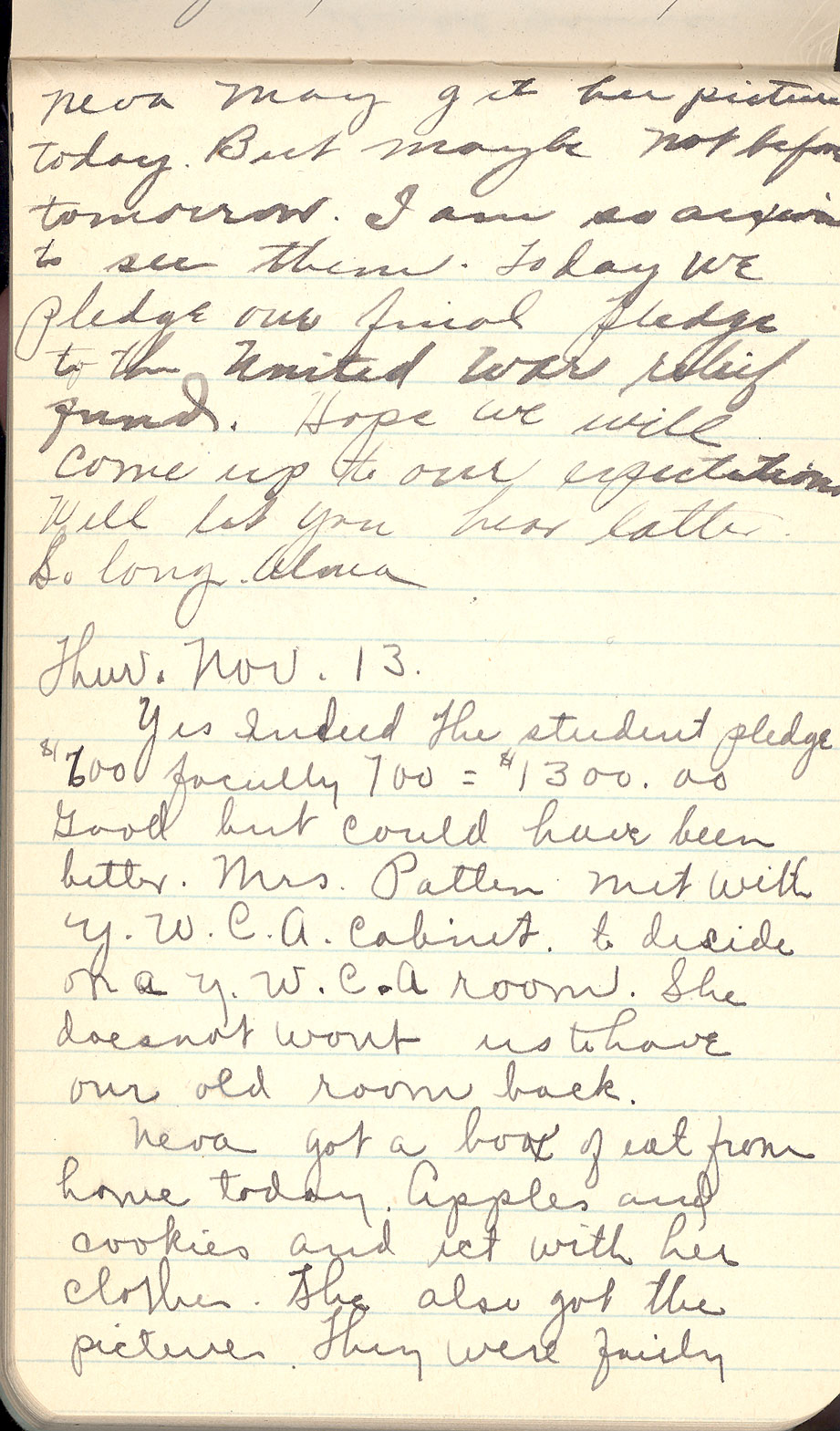