Bison were the dominant animals of the Great Plains. (See Image 6.) They were not only the largest mammal of the region, but were so numerous that travelers often described the grasslands as being completely blackened by herds of bison. 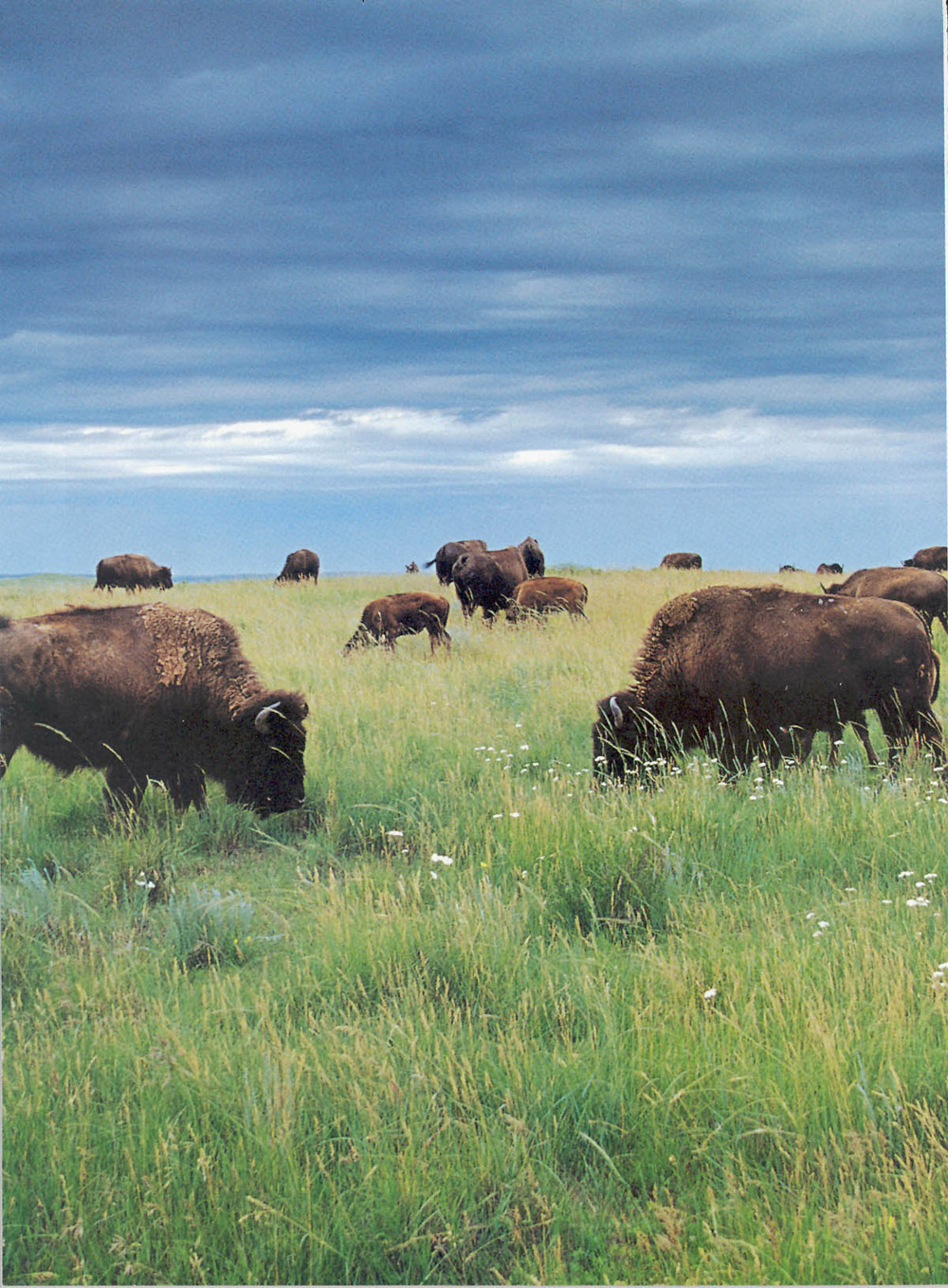 Image 6: Bison are grazing animals that interact with other grassland animals in an important environmental relationship. Though few live in the wild in North America today, the bison have been brought back from the edge of extinction by ranchers and national and state park programs. For thousands of years, until the late 19th century, they were the most important economic resource on the Great Plains. SHSND 3214.

Bison herds sometimes included thousands of animals. (See Image 7.) The herds had to keep moving in order to find plenty of grass and water. When bison wallowed in tall grass, they knocked it down, allowing humans to travel with greater ease and encouraging the re-growth of young, tender, grass shoots. 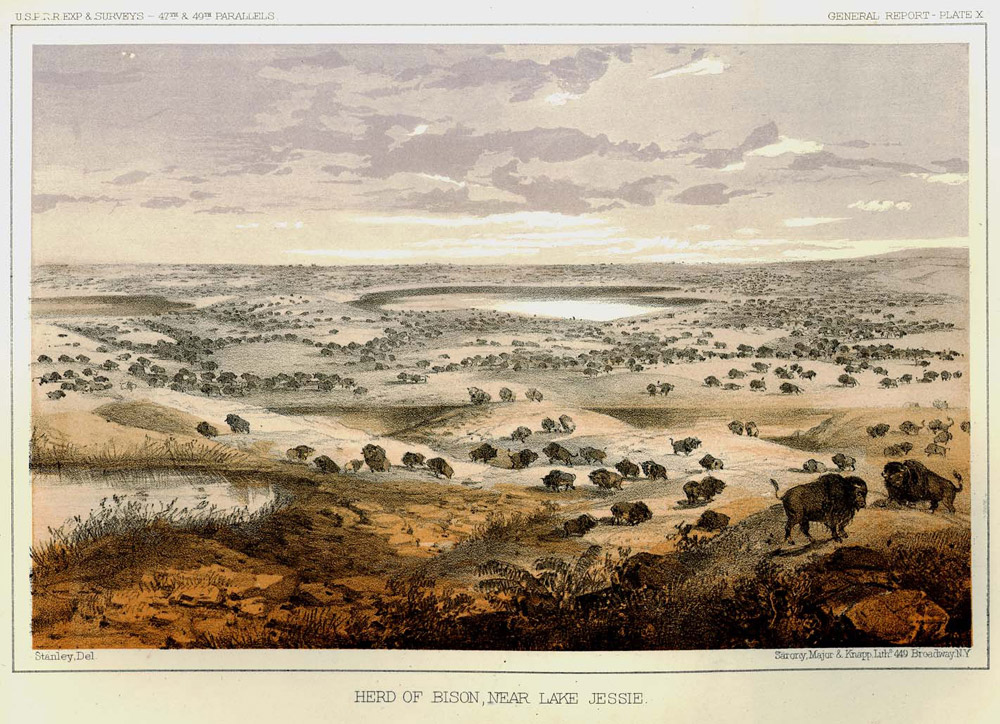 Image 7: This lithograph of bison grazing near Lake Jessie (Griggs County) was drawn by John Mix Stanley. Stanley, an artist, traveled with the Isaac Stevens expedition in 1853. Stevens wrote of this scene: “For a great distance ahead every square mile seemed to have a herd of buffalo upon it. Members of the party estimated their number to be as high as half a million. I do not think it any exaggeration to set it down at 200,000. I had heard of the myriads of these animals inhabiting these plains, but I could not realize the truth of these accounts until to-day, when they surpass anything I could have imagined from the accounts I had received.” SHSND 917.8 Un3r V12 p59.

Other animals interacted with bison. For instance, prairie dogs (Cynomys ludovicianus) also graze on prairie grasses. They line their burrows with grass and keep the grass of their villages cut short to allow them to see predators approaching. Tender, young grass that re-grows after prairie dogs take their share appeals to large ungulates like bison. However, bison avoided massive prairie dog villages where the grasses had been eliminated over hundreds of acres. Animals that preyed on prairie dogs helped to prevent widespread destruction of the grasslands. Black-footed ferrets (Mustela nigripes), coyotes, badgers, and swift foxes preyed on prairie dogs to keep their numbers in check. The interaction among the bison, the prairie dogs, and the predators created a beneficial ecological balance. 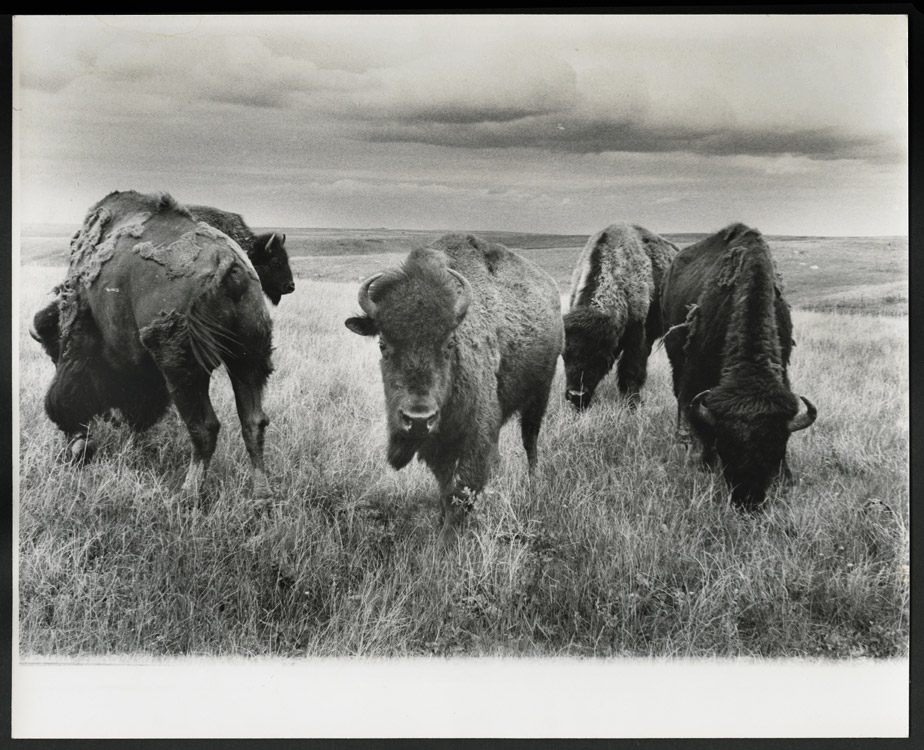 Image 8: The long hair growing between the horns on a bison’s head protected their faces in winter storms. Their wooly outer coats kept them warm in the winter, but were shed (as in this photo) in the summer. Bison used their heavy heads to push snow aside in the winter so they could continue to graze. They ran fast, stopped quickly, and turned on a dime. Few predators, other than humans, could harm a healthy bison cow or bull. SHSND 0811-003.

Bison are well-suited to life on the Plains. Grass is their primary source of food. Their heavy outer coats protect them from winter cold. (See Image 8.) The longest hair on their bodies grows between their horns. It can be up to 16 inches long, giving their faces good protection from the wind. BisonThough bison are of the same biological family (Bovidae) as cattle, bison withstand winter storms much better than cattle. Cattle turn their heads away from a storm and tend to wander with the wind. If cattle wander into a coulee or a fence during a storm, it is possible that they will trample one another or suffocate. Because of this natural habit, the bad winter of 1886 caused the deaths of thousands of beef cattle on the open range. In a storm, bison turn their heads into the wind and wait out the storm. used their heads and horns to brush deep snow away from winter grass. When wild bison herds roamed the Plains, they withstood winter storms by turning their heads into the storm until it passed.

Though very large and heavy, bison could run at speeds up to 35 miles per hour. They were agile and could stop and spin quickly to turn on an aggressive predator. They used their massive heads to ram opponents and predators, and their horns could tear into the guts of a pursuing horse or wolf. Hunters considered wild bison far more dangerous than grizzly bears.

Bison also had a well-developed sense of smell. Alexander Henry believed that bison could “smell the track of even a single person in the grass, and run away in the contrary direction. I have seen large herds walking very slowly to pasture, and feeding as they went, come to a place where some persons had passed on foot, when they would instantly stop, smell the ground, draw back a few paces, bellow, and tear up the earth with their horns.”

After horses came to the northern Great Plains around 1750, the competition between bison and horses sometimes caused difficulties. Humans often followed the bison herds to hunt, but had to follow a path that had not been grazed so thoroughly by the bison that there was no grass left for their horses.

Several early travelers on the Great Plains noted that wolves often appeared a day before a bison herd. A pack of wolves could attack and kill a full-grown bison bull if it turned away. Wolves could also kill a calf or a weakened adult animal. However, if a healthy bison stood its ground and faced the wolf pack, the wolves would probably back down.

Hunting pressure began to result in smaller and more scattered bison herds by the 1820s. The decline of the bison population in North Dakota began in the northeastern region and spread westward. In addition to increasing market demand for bison hides, traders, trappers, military and exploratory expeditions all relied on bison meat. These visitors to the northern Plains took fresh meat as necessary and left the rest to rot on the carcass. Some European American hunters killed only for sport. (See Document 2.) By 1860, the surviving herds had been driven toward far western Dakota and Montana. 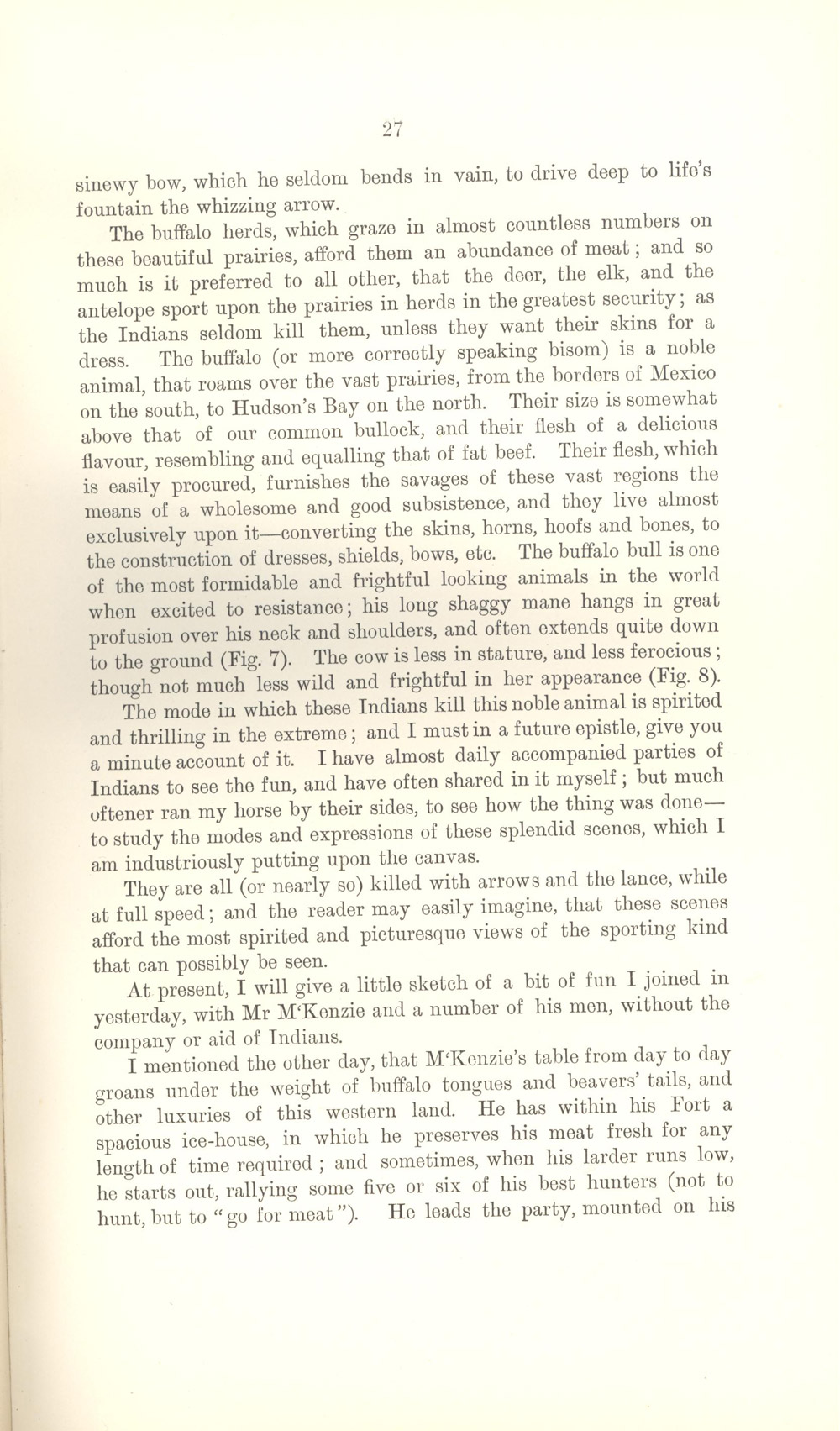 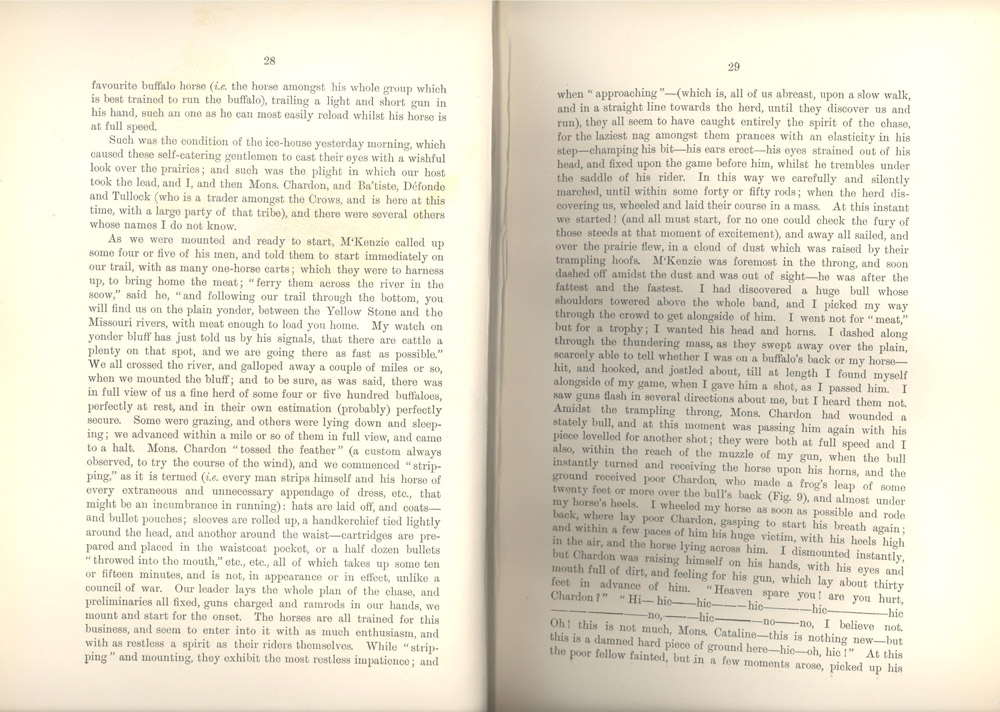 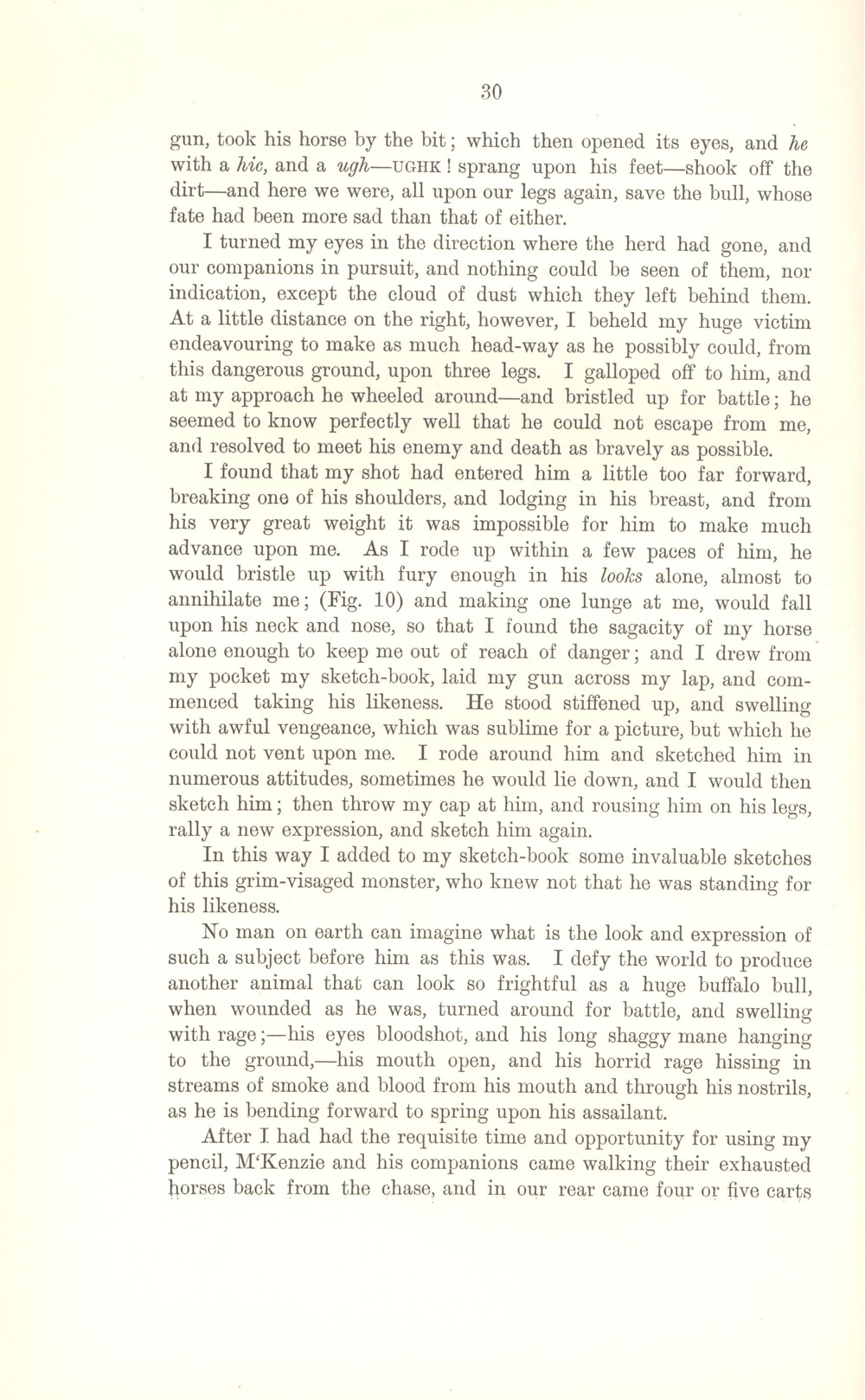 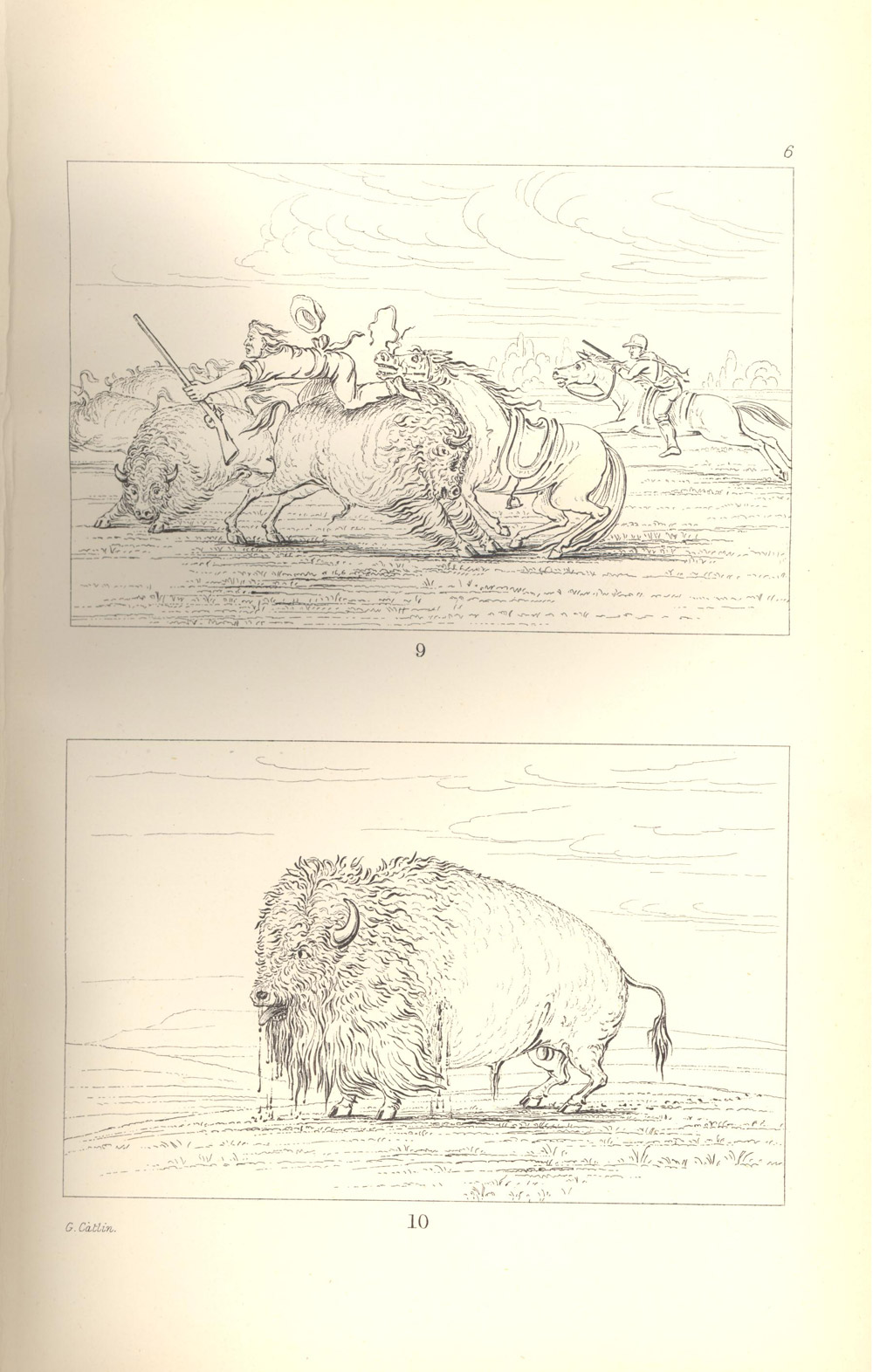 Why is this important?  Bison were the most economically important animal of the Great Plains until 1880. Indians used every part of the bison carcass for food, housing, clothing, furnishings, and other material needs. European Americans used bison meat. Eventually, American industries developed uses for hides (industrial belts) and bones (fertilizer and paint).

Bison also had an important role in grassland ecology. Their hooves churned the soil, and their manure fertilized the grasses. Birds and burrowing animals interacted with bison as part of the complex of processes that maintained the health of the grasslands.

Though predators had little effect on healthy bison herds, bison succumbed to market hunting and the loss of pasture to fires, horses, and other competitors for grasses. They were replaced eventually by beef cattle.