The quest for beaver fur brought English and French traders to the northern Great Plains in the late 18th and early 19th centuries. They harvested and traded for other furs as well, but none had the importance of beaver. (See Image 3.) 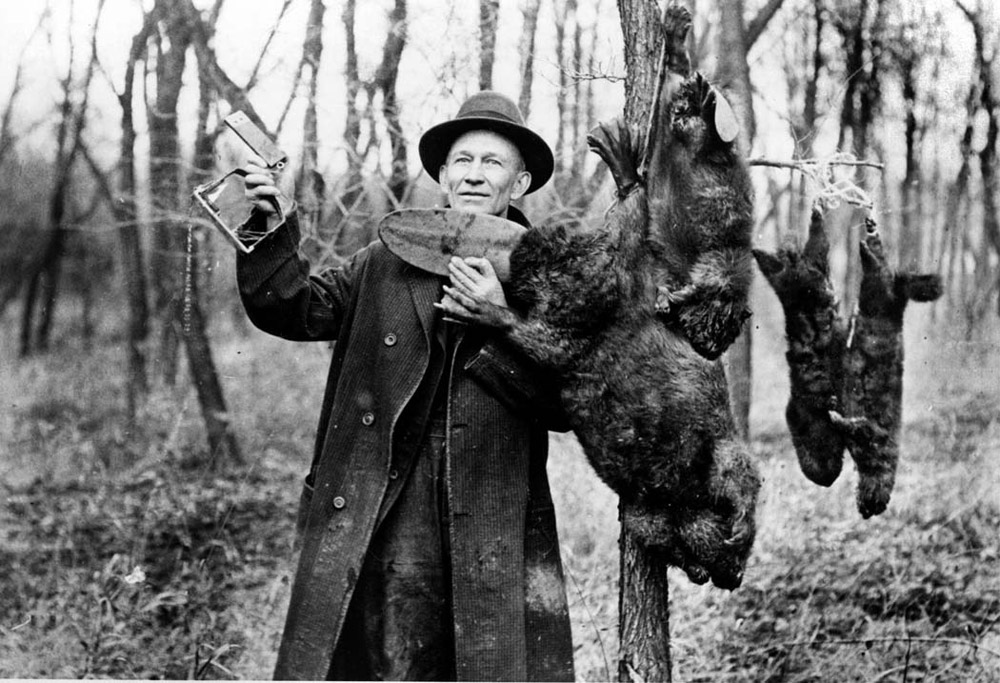 Image 3: Beavers were trapped nearly to extinction by 1820. Beaver fur made an ideal felt for gentlemen’s hats. The beaver population recovered when fashionable men began to wear silk hats instead of beaver fur hats. Today, beavers can be found in most of North Dakota’s streams. They are still trapped, but the market does not demand as many beavers today as it did in 1800. SHSND A3931. 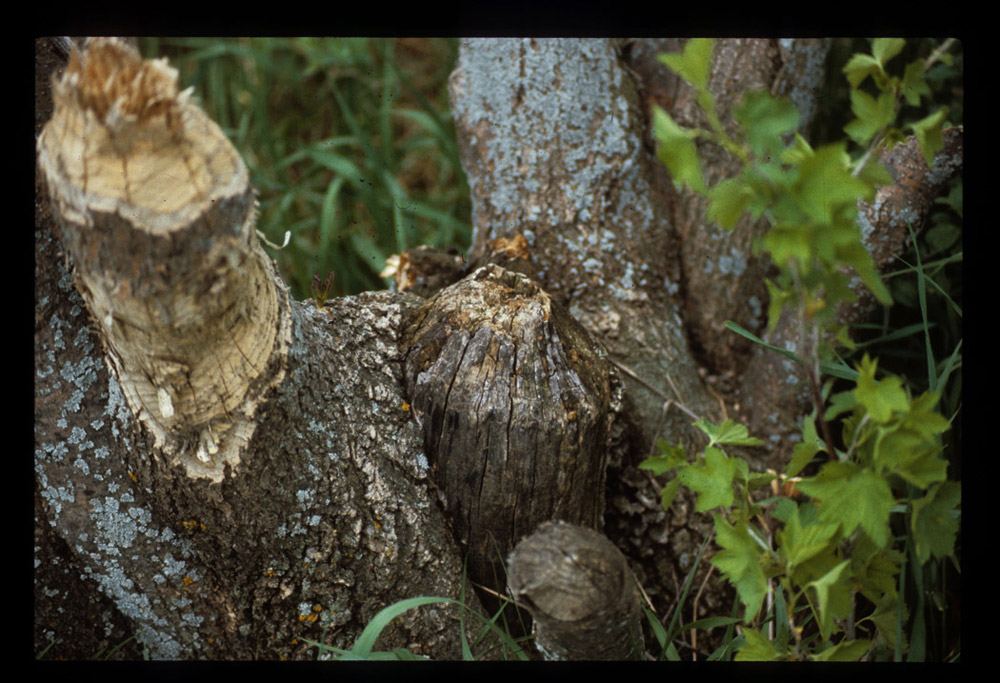 Image 4: Beavers cut trees down by gnawing on the trunk. The typical gnawing pattern creates a pointed tip to the stump. Where these were found, trappers knew that they could harvest beavers for the trade. Beavers needed to gnaw to keep their teeth from growing too large. They used to trees to build their homes, or lodges, in streams and to build dams across a stream. SHSND 2013-P-024-0381.

Beaver fur made a very fine felt that could be formed into gentlemen’s hats. Beaver felt hats kept their shape even after becoming wet in a rainstorm. Because beaver fur (or felt) hats were practical as well as elegant, the demand for these hats brought about over-trapping of beavers in Europe. 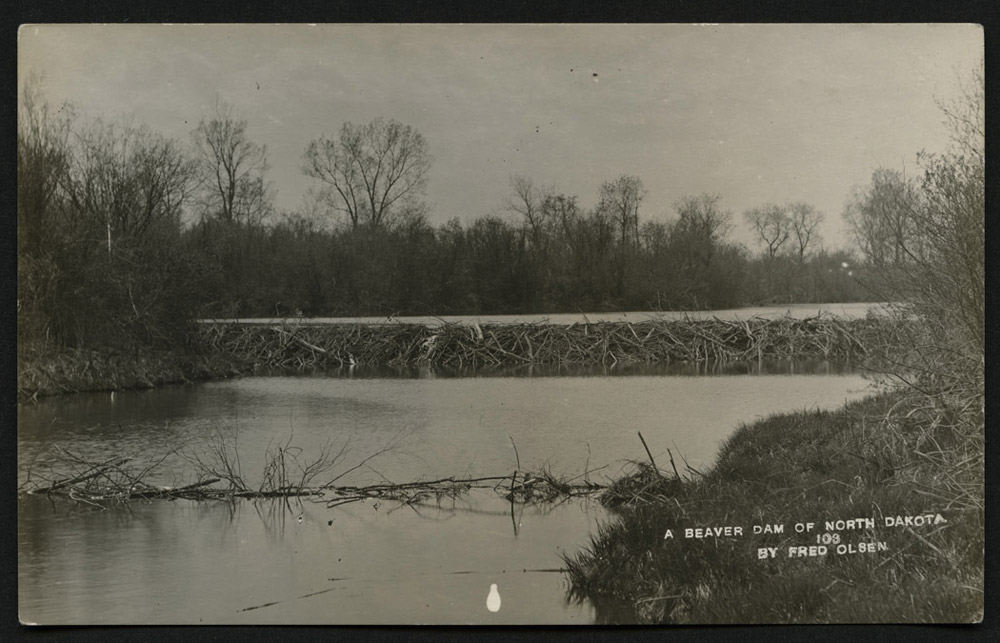 Image 5: Beavers dammed small streams creating ponds. These dams and ponds indicated to trappers that this stream was a likely place to trap beavers. SHSND 2013-P-005-0016.

In the 17th century, the quest for beaver fur extended to North America. As French and British fur trading companies extended their search for abundant sources of beavers, they looked for signs that waterways might have beavers. (See Image 4.) Gnawed trees and beaver-made dams or lodges in streams revealed the presence of beavers in both the forests and grasslands. (See Image 5.)

Throughout the 18th century, the demand for beaver pelts continued to rise. As demand rose, so did the price which increased more than 300 per cent between 1700 and 1800. Using current values of the dollar, a single pelt was worth about $31 in 1700. By 1800, a single pelt was worth $94.90. These extremely high values increased the competition among the fur trade companies to trap and trade as many beaver pelts as possible.(See Document 1.)

Alexander Henry was a partner in the North West Company, a fur trapping and trading company that was chartered in London for operation in North America. The company’s headquarters were in Montreal, but their extensive operations included posts in what is now North Dakota. Before 1818, the boundary between British Canada and the United States was not well-defined, so the fur companies traveled wherever they could find beaver. Many of the trappers were American Indians who traded the beaver pelts to the companies for manufactured goods.

Beaver hunting took place in winter and early spring when the beaver’s coat was thick for winter warmth. Though steel traps were available and widely used since about 1750, Henry’s men apparently killed beaver with guns or clubs. The work was dangerous, not only because the animals defended themselves with teeth and claws, but because canoeing in the very cold waters of late-winter streams could result in drowning or death from hypothermia.

In 1809, Henry wrote a description in his journal of how his men hunted beaver.

To kill beaver, we used to go several miles up the rivers, before the approach of night, and after the dusk came on, suffer the canoe to drift gently down the current, without noise. The beaver, in this part of the evening, come abroad to procure food, or materials for repairing their habitations; and as they are not alarmed by the canoe, they often pass it within gun-shot. [...] The most common way of taking the beaver is that of breaking up its house, which is done with trenching-tools, during the winter, when the ice is strong enough to allow of approaching them; and when, also, the fur is in its most valuable state. Breaking up the house, however, is only a preparatory step. During the operation, the family make their escape to one or more of their washes. These are to be discovered, by striking the ice along the bank, and where the holes are, a hollow sound is returned. [...] I was taught occasionally to distinguish a full wash from an empty one, by the motion of the water above its entrance, occasioned by the breathing of the animals concealed in it. From the washes, they must be taken out with the hands; and in doing this, the hunter sometimes receives severe wounds from their teeth.

The export market for beaver felt hats had an important place in the English economy. By the 18th century, most of the beaver fur came from British colonies in America. The pelts were shipped toEnglish hatters who made them into fashionable felt hats.

Other furs were also used in hat-making, and the hides of some fur-bearing animals were used for gloves or decorations on coats or other clothing. Though trappers and traders also harvested martens, otters, minks, foxes, and other animals, beavers were the most in demand. In 1787, Canadian fur companies exported 139,509 beaver pelts. The total of martens, otters, minks, foxes, and fur seals added up to only 85 per cent of the number of beavers.

Fur companies such as the Hudson’s Bay Company, the North West Company, and the American Fur Company had little concern about over-trapping. Actually, sometimes a fur company would create a “beaver desert” by trapping out an area to discourage trappers working for competing companies.

By 1820, the North American beaver (Castor Canadensis) was in danger of extinction. (See Chart below) The numbers of animals harvested declined as beavers became harder and harder to find. However, the beaver was saved by a shift in fashion. In 1797, the silk top hat became the newest fashion in England. Young men began to wear silk hats and the fashion spread throughout Europe and North America. By 1830, the beaver fur hat was no longer in demand, and the North American beaver was saved from extinction.

Chart: We can see the decline in beaver numbers by taking a close look at the shipments made from Alexander Henry’s Pembina post.

Though the numbers recovered a bit in 1805 and 1806, Henry’s trappers and traders were looking farther and farther for beavers. He also had increasing competition from the Hudson’s Bay Company and the XY Company. On January 1, 1805, Henry described the “country being almost destitute of beaver...” On August 3, 1806, while traveling through the Souris (Mouse) River country he wrote, “At this place we have, for several years past, kept up a winter establishment; but the country is now destitute of beaver and other good furs, and the returns would not pay the expenses.”

Why is this important?  Fur-bearing animals were by far the most economically important natural resource for European markets on the northern Great Plains in the 18th and early 19th centuries. During these years (from about 1780 to about 1820) North Dakota was an important international economic center. The fur resources of the northern Great Plains commanded the attention of European trading companies and manufacturers. Though the fur trade in this region was fairly short-lived, competition and aggressive trade practices nearly led to the extinction of the beaver.