By the 1960s, the United States was committed to the containment policy. The United States had a strong presence in many parts of the world where communism appeared to be a threat. In many former colonies of European nations, communism appealed to revolutionaries who wanted to remove colonial powers and restore their nation to independent status.

Vietnam, a small country in Southeast Asia, had been a French colony. Beginning in the 1930s, the Vietnamese people had tried to overthrow the French government in Vietnam. After World War II, the French tried to restore their power in Southeast Asia, but finally lost control of the Vietnam. Vietnam was then divided into two parts at the 17th parallel of latitude. Communist Vietnamese controlled the northern part; non-Communists held the southern part. The arrangement was supposed to last two years, but the United States decided to help South Vietnam resist reunification of the country with communist North Vietnam.

At first, the United States sent “advisers” who helped train the South Vietnamese army and advised the government. The government of South Vietnam was not popular with the people of the divided nation. In the north, the communist government imposed communism on its people with brutality. The number of advisers in South Vietnam increased slowly for 10 years. Then, in 1964, North Vietnamese ships in the Gulf of Tonkin fired on a U.S. ship called the Maddox. President Lyndon Johnson appealed to Congress for a declaration of war. The attack, Johnson said, was unprovoked. Congress did not pass a declaration of war, but supported military action through the Gulf of Tonkin Resolution.

More than 58,000 U.S. soldiers and nurses died in the war. In spite of the huge effort and sacrifice, the war in Vietnam was considered a military failure for the United States. During the war, the United States experienced social disorder and cultural change as young people protested the war and rejected long-standing American values.

North Dakota had many of the same experiences during the Vietnam War as the rest of the country. Men were drafted into military service, and many enlisted voluntarily. A few men avoided military service. College campuses were the centers of discussion and debate about the proper role of the United States in Southeast Asia. Some people turned against the war, some supported the war, and others wrestled with the issues without coming to a conclusion.

Why is this important? The Vietnam War brought many changes to the United States. Across the nation, people were divided about the role the U.S. should play in other parts of the world. The divisions often became intense and sometimes violent. The Vietnam War was an event that made many Americans question our nation’s leadership in world affairs.

North Dakota experienced the turmoil of the Vietnam era in a quieter way than many other places. Our smaller population, agricultural heritage, and deep-rooted faith and patriotism cushioned the state from the intense debate and growing opposition to the war found in other places.

North Dakota and the War in Vietnam

North Dakotans met the Vietnam War in the same way that they met other wars. Young men enlisted or were drafted; women enlisted in military service as nurses and in other non-combat military positions. People prayed for the safety of soldiers and the end of the war. Mothers and friends sent boxes of food, magazines, and cigarettes to soldiers overseas.

These three poems are taken from a collection of 29 poems Claire Eide wrote as a young man. “The Dark Night” is about the loneliness of a soldier far from home. “Age of Fairy Tales Past” describes a young man putting away his childhood and learning to look at life as an adult. “Observations of a Young Traveler . . .” is a long, complicated poem that tells of a restless young man looking for his place in the world. Eide has placed chord notations for guitar accompaniment above some of the words in “Age of Fairy Tales Past” and “Observations of a Young Traveler.” Source: SHSND Mss 21160 " src="/gr8/sites/default/files/zoomImages/Unit4Lesson4Topic3/eide1.jpg" /> 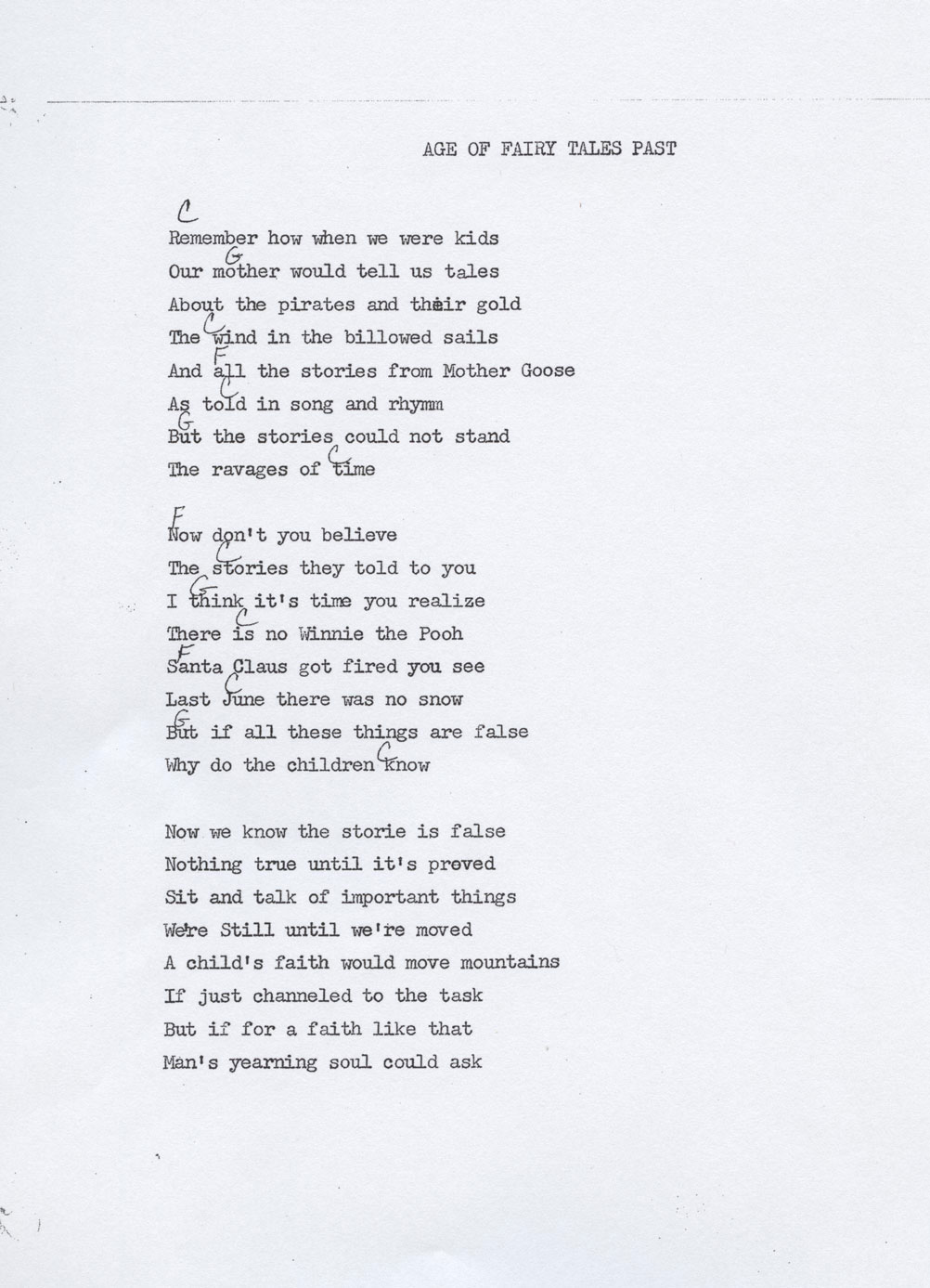 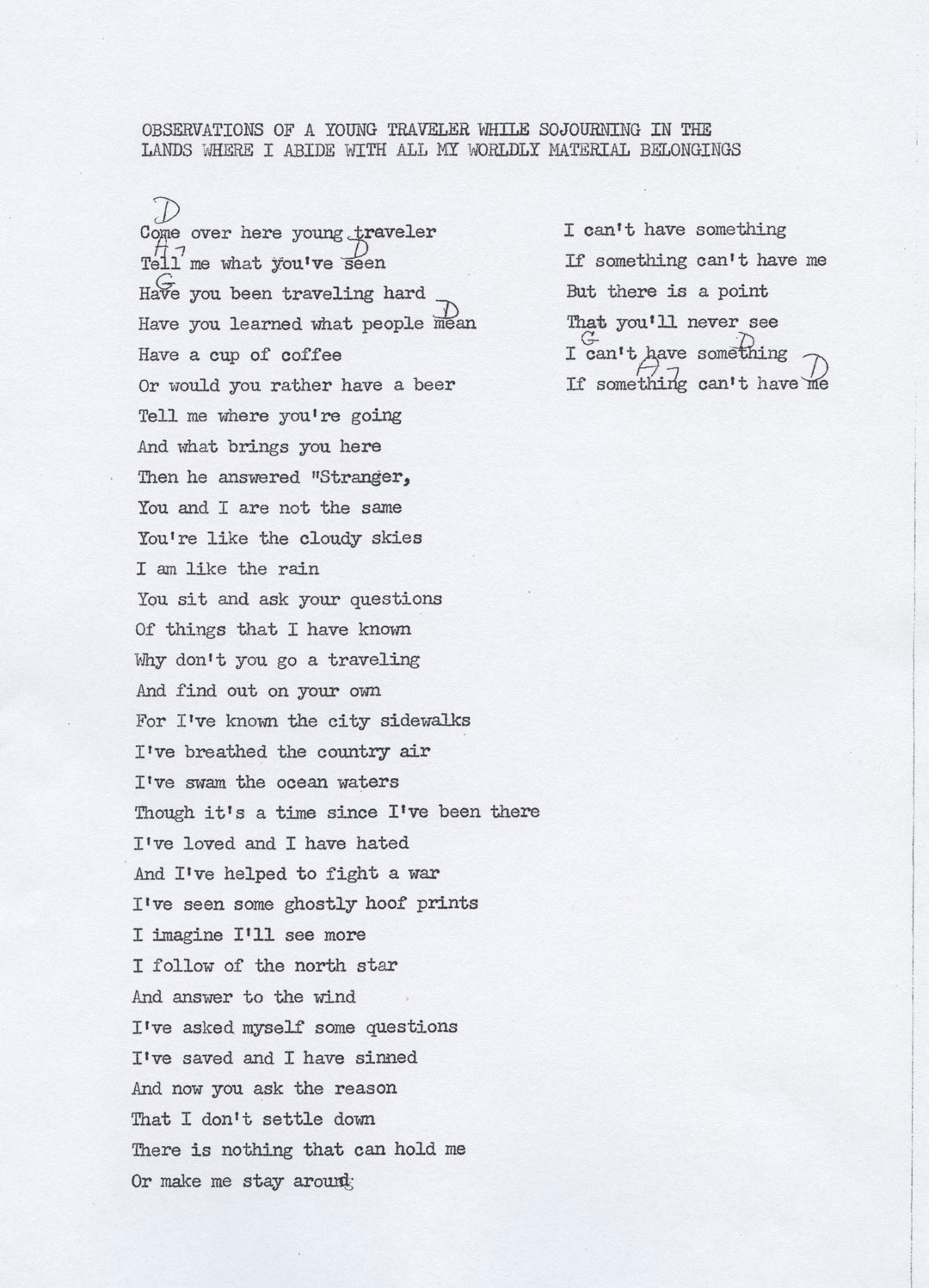 Men were chosen for Army service by the Selective Service, also called the draft. Young men had to register with the Selective Service as soon as they turned 18. A local board made decisions about who was exempt by physical limitations or because of occupation or family situation. The draft board made announcements monthly about how many would be called. North Dakota’s monthly quota ranged from about 100 to 200 men. Of those North Dakota soldiers who served in Vietnam, 198 died. Those who returned home had gone through many physical and emotional changes during their service in the war. (See Document 4)

Some men selected for the draft refused to serve. Men could evade the draft in several ways. They could enlist before they were drafted. By enlisting, they could choose the branch of the military service they preferred. Men could also join the National Guard (which was not mobilized during the Vietnam War). However, preference for Guard positions was given to men who were re-enlisting in the Guard or those who had been discharged from regular army service. There were few positions in the North Dakota National Guard for men with no military experience.

More drastically, men could refuse induction into the Army. This action might result in a jail sentence. Only a small number of North Dakota men refused induction.

Image 12: Governor William Guy of North Dakota traveled to South Vietnam in 1967 to observe the presidential election in that country. Governor Guy is in the middle. On his left is Senator George Murphy of California. The two men watch as a South Vietnamese woman casts her ballot. SHSND 11078-3888.

William Guy served as governor during most of the Vietnam era. During his administration, he received mail about the war. He responded carefully, noting that as a state governor, he had little influence over federal foreign policy. Officially, Governor Guy agreed with the Democratic Party’s position in support of the war, but he had some doubts about the war policy. “I don’t think it was clear-cut [in 1966] that the U.S. government’s best interests were [served by] that war.”

President Lyndon Johnson asked Governor Guy to serve as an election observer in the first presidential election in South Vietnam. Governor Guy traveled to Vietnam in 1967 and become convinced that the South Vietnamese “did want to develop a communist-free democracy and that our presence there was justified.” (See Image 12.)

However, in 1968, Governor Guy’s support for the war began to weaken. By the summer of 1968, he was certain that it would be best for the U.S. to pull troops out of Vietnam. He had felt the tide of public opinion turn in North Dakota as well. And yet, it would be several more years before the war ended and the soldiers returned home to their families and farms.

Why is this important? The Vietnam War created a sense of confusion in the United States. Could the Vietnam War be justified as a way to stop communist aggression? Should soldiers be sent to war because of vague foreign policy goals? Why did so many young people oppose this war when their parents had willingly fought in World War II and in Korea?

As it became more difficult to answer these questions, North Dakotans began to re-think their support of the war. Though very few North Dakotans condoned protest or draft evasion, they exercised their civil right to freedom of thought and speech throughout the course of the war. As Americans began to turn against the war, North Dakotans, too, agreed that the cost of war had been high and too little had been accomplished.

The years of the Vietnam War were marked by conflict on the home front. Individuals struggled to understand a war that, like the Korean War, seemed to have no real purpose. Young people whose lives were most directly affected by the war, presented the strongest challenge to United States policy on the conduct of the war.

There were few protests in North Dakota. Perhaps this was because North Dakotans had a strong sense of patriotism. Although many people did not understand the reasons for the Vietnam War, they believed that they had a duty to maintain loyalty to the President and Congress. However, many people took their constitutional right to question the government very seriously. They wrote letters to elected officials and to newspapers. They gathered to make public protest. They were part of a swelling tide of concern over the course our nation had chosen to follow.

At the University of North Dakota campus, students sat down near an Army recruiting station with a protest sign reading “A university is not an employment agency for the Army.”  Student editors of the North Dakota State University newspaper, the Spectrum, and the UND newspaper, Dakota Student, tried to bring the issues surrounding the war to their student readers.

Students also made public displays of support for the U.S. Vietnam policy. UND students held a “teach-in” (an out-of-class learning session) to show support for the Vietnam War. One of the teach-in leaders, Jana Bommersbach, told her opponents, “If we don’t stop the communists there [Vietnam], where?  Here?”  Soon, however, she could no longer believe her own words. Though she had grown up in a patriotic family and had a brother serving in the Army in Vietnam, she finally realized that she did not know what the war was about. She changed her position and made her feelings known through protest.

In 1966, a few NDSU students held a protest march in Fargo. Compared to Vietnam protests in other parts of the country, this one was small, quiet, and did not cause conflict. There was another small protest in early 1973. These protests were peaceful and legal. They were part of a much larger series of protests held throughout the nation that indicated to elected officials that support for the war was fading. Peace negotiations were finalized in 1973, and Congress decided to end the war when North Vietnamese seized control of Saigon in 1975.

Why is this important? Although there was no major anti-war movement in North Dakota, the few protests reveal that some North Dakotans were at odds with federal war policy. The protests link North Dakota with protesters, young and old, who were active in every city and state in the nation. They opposed a war policy that had cost thousands of lives and seemed to have no purpose. Though some people considered the protests unpatriotic, the protesters conducted themselves peacefully within the constitutional framework of freedom of speech.