Following World War II, the Asian nation of Korea was divided into two spheres of influence. The Soviet Union occupied the northern part of Korea and the United States occupied the southern part. On June 25, 1950, soldiers of communist North Korea (with help from China) crossed the 38th parallel of latitude into non-communist South Korea. The United States sent troops to reinforce the Korean army. The U.S. pushed the North Koreans back to the 38th parallel. The United Nations approved and supported military action in Korea, but the United States Congress did not declare war. Politicians and military leaders in the U.S. believed that the events in Korea proved the value of the Truman Doctrine.

The North Dakota legislature passed four resolutions in 1951 concerning the Korean War. One resolution extended good wishes to the soldiers who “have answered the call to active duty” and praised them for their willingness “to defend our democratic ideals and institutions.”  Another resolution asked the draft board to offer deferments to farmers and farm workers, if possible. The third resolution offered “sympathy and support for men in the Armed Forces” because “sorrow came to many homes in our state because their sons went forth to war, never to return to their parents.”

The fourth resolution asked Congress and the President to withdraw all troops and military personnel from Korea because “this is not a military action approved by Congress” and, therefore, the war requires no “political or military commitment” from the citizens of North Dakota. The resolution further asked Congress “to disassociate ourselves from the Korean policy, a policy which has brought to our youth the tragedies of war without a candid recognition of the existence of a state of war, a policy which has made us the policeman of the United Nations.”

Though the resolutions of 1951 had no apparent effect on the decisions of the Congress or the President, they expressed the perspective of many North Dakotans. However, among North Dakota farmers, the influential Farmers’ Union did not officially oppose the war (even though many of its members did). The Farmers’ Union took the position that the United Nations, which sponsored the international military action in Korea, was the world’s best hope for international peace.

The war, or “police action,” officially ended with a cease-fire order in July, 1953. Three million Koreans and 37,000 American soldiers died in the conflict. U.S. troops remained in Korea to maintain the division between North and South Korea.

Why is this important? The Korean War was the first test of the Truman Doctrine, but the war ended with no clear solution to the conflict. The United States made it clear that it would apply military force to “contain” and prevent the spread of communism. Though most citizens of the United States and North Dakota believed that communism posed a threat to the United States, many people did not agree that the solution was military action. Today, Korea is still an unhappily divided nation with a strong military presence at the 38th parallel. 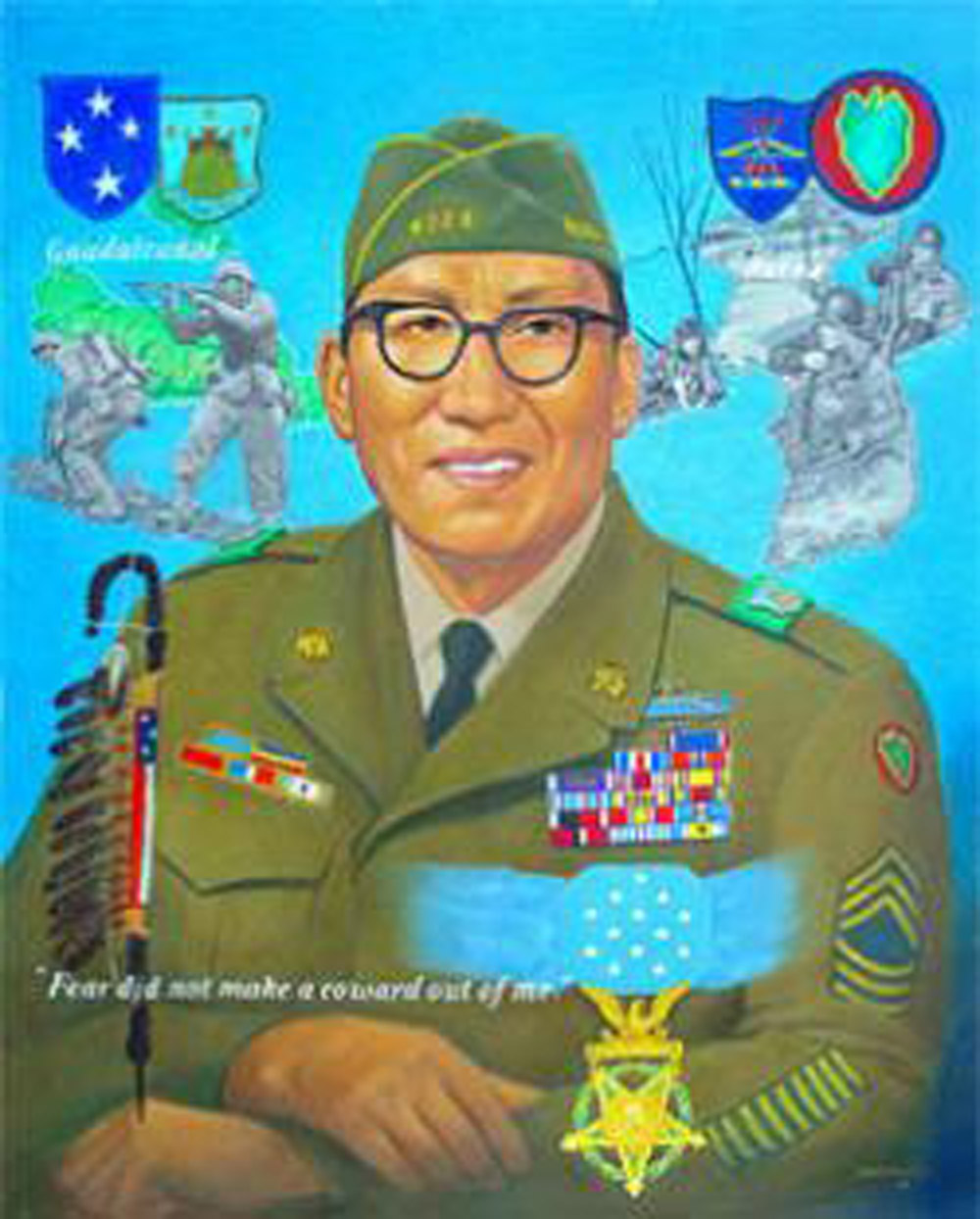 Image 10: This is the portrait of Woodrow Wilson Keeble that hangs in the North Dakota capitol. Keeble was inducted into the Theodore Roosevelt Rough Rider Hall of Fame a few months after receiving the Congressional Medal of Honor.

Woodrow Wilson Keeble was born in 1917 in Waubay, South Dakota to Sisseton Dakota parents. After his mother died, he was sent to the Circle of Nations Indian boarding school in Wahpeton, North Dakota. Keeble was a fine athlete and pitched for the Wahpeton baseball team in the 1930s. The Chicago White Sox baseball organization was trying to recruit Keeble in 1941. He never had a baseball career because World War II broke out. Keeble, a member of the North Dakota National Guard 164th Infantry Regiment, served in the Pacific theater of war. He fought at Guadalcanal, Leyte, and Mindanao–some of the toughest fighting of the war. (See Image 10.)

The 164th National Guard Infantry was again called to duty in the Korean conflict. Keeble joined his unit in fighting in terrible combat. His leadership was respected by all of the men who fought with him. In the confusion and panic of battle, he would give advice and comfort to the men so they could carry out their mission. A private in Keeble’s company remembered a day when they were “going down this hill, down into a ravine, there, and boy, BOOM, BOOM, [land mines exploded.]  So Chief [Keeble’s nickname] hollered out, ‘Alright guys. You walk wherever everybody is stepping. The guy ahead of you, he don’t blow, you got faith, keep on going until we get out of here.’”  Another soldier remembered, “There was mine fields. Keeble took it on his own always to be the leader risking his life for he thought his experience was better than the common soldier.”

Woody Keeble was promoted to Master Sergeant in 1951 while on duty in Korea. His men, however, usually called him “Chief.” The term was both a reference to his American Indian heritage and a term of respect for an accomplished leader.

Keeble, though, remembered the fear of combat. He once said, “There were terrible moments that encompassed a lifetime, an endlessness, when terror was so strong in me, that I could feel idiocy replace reason. (Yet,) I have never left my position, nor have I shirked hazardous duty. Fear did not make a coward out of me."

Though Keeble was wounded several times and involved in many combat events, there was one day when his heroism was so remarkable that he was nominated for the Congressional Medal of Honor. On October 20, 1951, Keeble was leading a platoon in an attack on an enemy position on a steep hill. The enemy held three well-fortified positions. Keeble crawled forward until he was close enough to the enemy’s machine guns to throw a grenade. With the accuracy of a great baseball pitcher, he tossed a grenade and destroyed the enemy and their machine gun. He moved on and destroyed another machine gun with another grenade. The enemy had spotted him and were throwing grenades at him, but he continued to move toward the third machine gun and successfully destroyed it with another grenade. Then, his men were able to join him and succeeded in taking control of the hill. 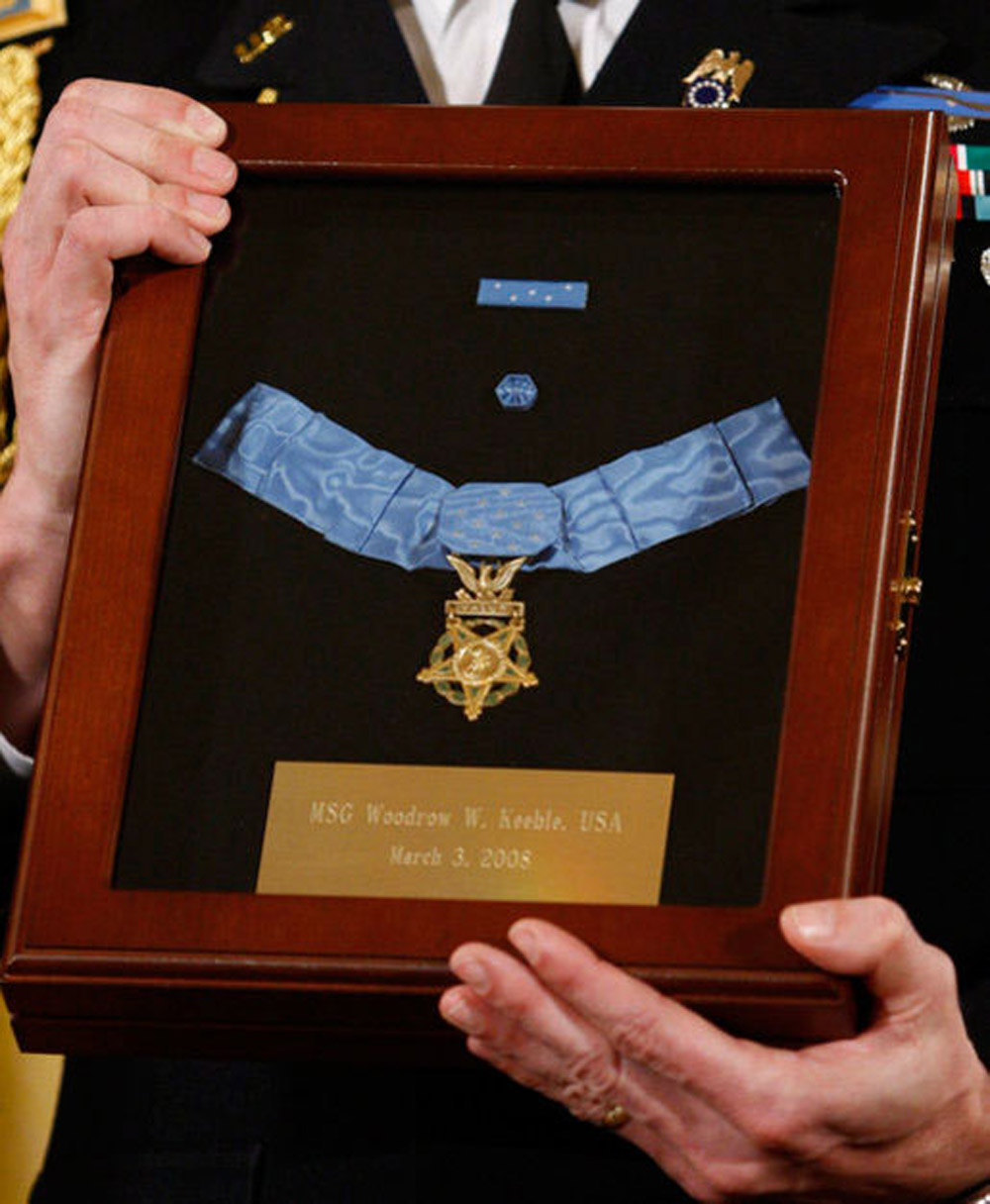 For his heroism in combat in both World War II and in Korea, Keeble was awarded the Distinguished Service Cross, the Silver Star, the Bronze Star with V for Valor, the Bronze Star for Merit, and the Combat Infantryman Badge. He was North Dakota’s most decorated veteran. He was nominated for the Congressional Medal of Honor after his service in Korea, but the nomination was lost. He was nominated a second time. (See Image 11.) On March 3, 2008, President George W. Bush presented Master Sergeant Woodrow Keeble with the nation’s highest military honor. Keeble was the first Dakota Indian to receive the Medal of Honor. In the summer of 2008, Woodrow Wilson Keeble was inducted into the North Dakota Theodore Roosevelt Rough Rider Hall of Fame.

Unfortunately, Woody Keeble had died many years before this honor was given him. After Korea, he returned to Wahpeton and continued teaching at the Circle of Nations school. He then found out that he had tuberculosis. Following surgery to remove one of his lungs, he suffered several strokes which left him partially paralyzed and unable to speak. Woodrow Wilson Keeble died in 1982 after many years of service to his tribe, his state, and his nation.

Why is this important? Master Sergeant Keeble left us an inspiring legacy of commitment to service and duty. If he had he not won the Congressional Medal of Honor, we might never have heard of this gentle man who helped his neighbors and loved his country. But, as President Bush said, we can honor his memory and follow his lead.