In the late 20th century, a few of the more than 500 Indian tribes around the United States operated gambling casinos on tribal lands. Reservation gambling grew after the Supreme Court heard an important legal case. The state of California believed it had the right to control gaming on reservations and sued the Cabazon Band of Cahuila Indians over their bingo casino. The case went to the United States Supreme Court. In 1987, the Supreme Court upheld the right of tribes to operate casinos on reservations as long as the tribal casinos operated within state law. In 1988, Congress passed the Indian Gaming Regulatory Act (IGRA). The law established federal control over gaming regulation on Indian reservations. The law preserved tribal rights to establish and manage casino operations.

Image 2: Each of the reservations in North Dakota has a casino. Casinos provide jobs for tribal members. In addition, tribes can use the net profits from the casinos to invest in hospitals, schools, and other businesses on the reservation.

Under IGRA, gaming could include traditional Indian gambling games, bingo and pull tabs, black jack, and other games. At first, many casinos focused on bingo, but, after IGRA, tribes expanded their casinos to offer table games such as black jack or poker and slot machines. The casinos advertised in nearby non-reservation towns to encourage non-Indian visitors. North Dakota’s five tribal casinos host national entertainment acts and offer good restaurants and hotel rooms. 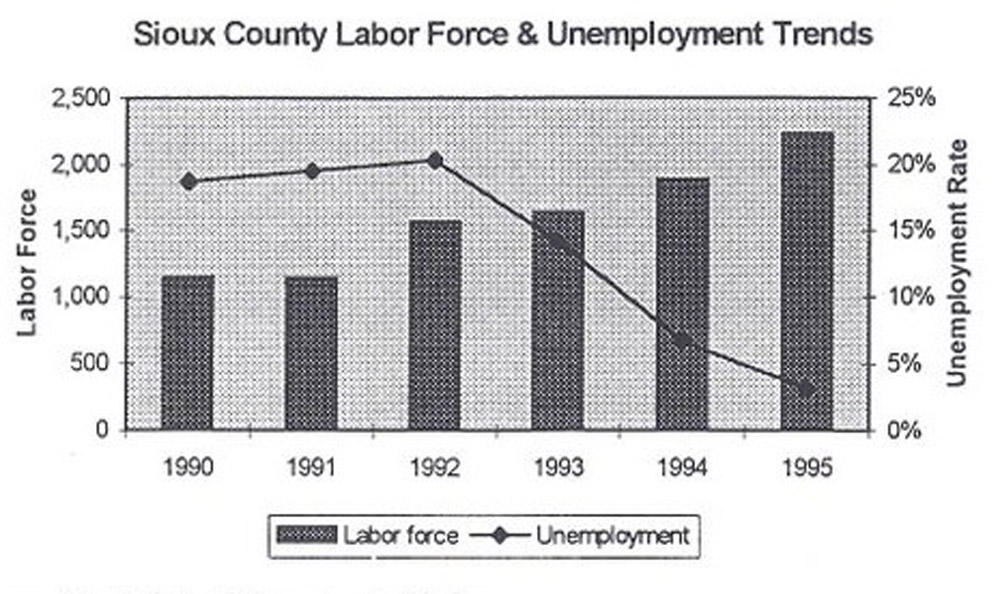 Image 3: After Prairie Knights Casino opened at Fort Yates on the Standing Rock Sioux Reservation, unemployment dropped significantly. Even though the number of available workers (labor force) were available in Sioux County, fewer people were unemployed because the casino created jobs and improved the economy in many ways. Source: North Dakota Department of Labor

Image 4: Shortly after several tribes opened casinos, the employment picture on the reservations changed. American Indians found good paying jobs near their homes on the reservation. There were jobs for non-Indians, too. And many people who had been unemployed or on welfare had jobs because of the improvement in the reservation economy. The initials stand for Three Affiliated Tribes (TAT), Spirit Lake Nation (SLN), Turtle Mountain Band of Chippewa (TMBC), Standing Rock Sioux Tribe (SRST), and Sisseton-Wahpeton Sioux Tribe (SWST). Source: North Dakota Department of Labor

Casinos have brought new jobs to reservations. (See Image 2.) Tribal members and veterans have preference in hiring, though non-Indians are employed by casinos as well. When the Four Bears Casino opened at New Town on the Fort Berthold Reservation in 1993, the casino employed 322 people. About 90 per cent of the employees were tribal members. Employment figures for all tribal casinos in North Dakota show that about 18 per cent of the employees are non-Indians. In 1996, the total casino payroll was $29 million. (See Image 3.) Before oil field jobs became available (around 2008), casinos were among the top employers of American Indians in North Dakota.

Gaming income varies depending on the location of the casino. North Dakota’s reservation casinos probably net (income after expenses are deducted) between 5 and 10 million dollars each year. This is a good source of income for the tribes, but the money has to stretch a long way. Gaming income can be used to fund tribal government, economic development, and to support various tribal programs. But there is not enough income from the casinos to fund all of the programs. Tribes try to invest the money in ways that return the most advantages to the community.

The casinos have other benefits as well. Casino gift shops provide a place where traditional crafts are sold. Construction, transportation, and other service companies find employment on reservations because of the casinos.

Casinos have not ended poverty on the reservations. However, jobs and gaming income have contributed to a healthier economic environment on reservations. (See Image 4.) Gaming has not replaced the traditional values of family and social relations, but has allowed those values to prosper in a community that is growing in economic strength.

Why is this important? Tribal casinos have brought new sources of income and helped to stabilize tribal economies. Tribes have looked for ways to re-invest gaming income to strengthen other areas of reservation economies. While casinos are important economic assets, they are only one part of a broader economic vision on many reservations.