The North Dakota suffrage movement had strong leaders but few followers before 1912. During those “drought years,” there were a few state conventions where suffragists gathered to discuss the issues. A woman suffrage bill was introduced into every legislative session between 1901 and 1911. No woman suffrage bills were approved. However, the legislature amended previous voting laws to affirm that only “male persons” would be legal voters. (See Document 5) 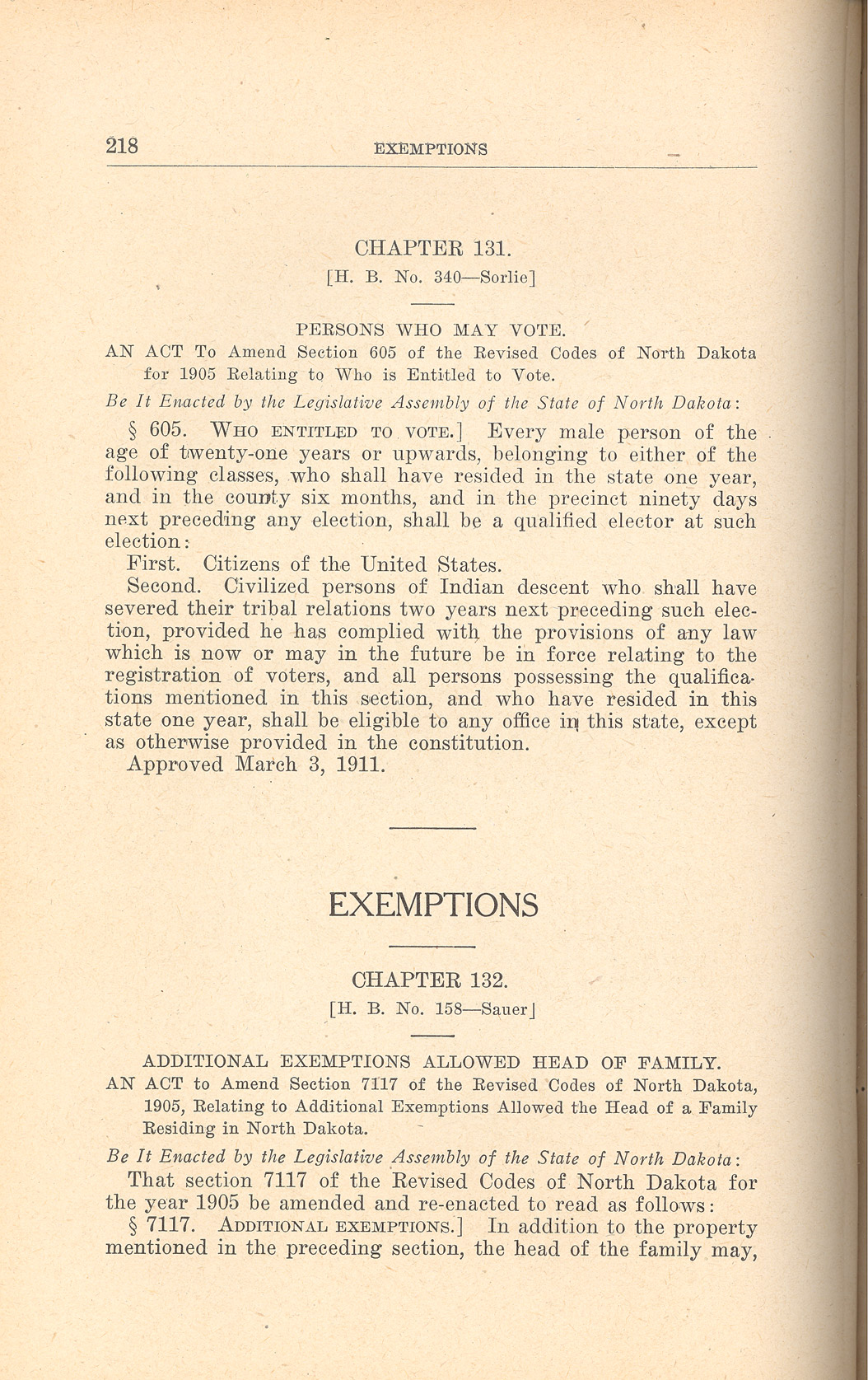 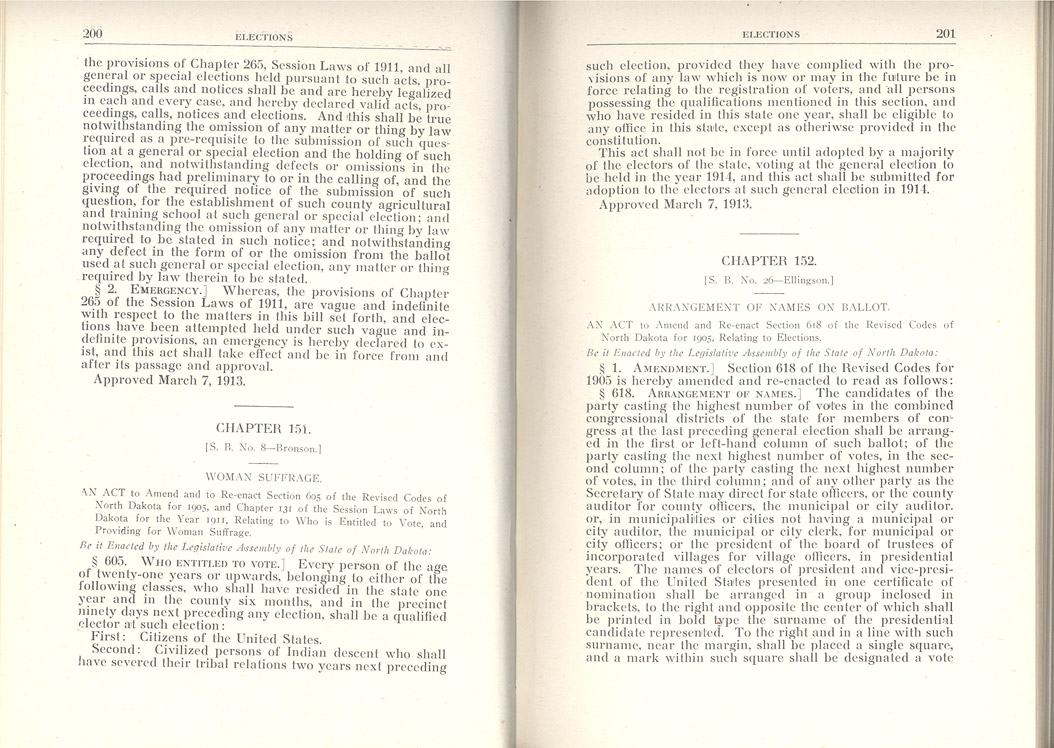 Document 6: The legislature granted women the unqualified right to vote in 1913. However, the legislature referred the law to a vote of the people (all male voters) in 1914. The law did not pass in the general election. 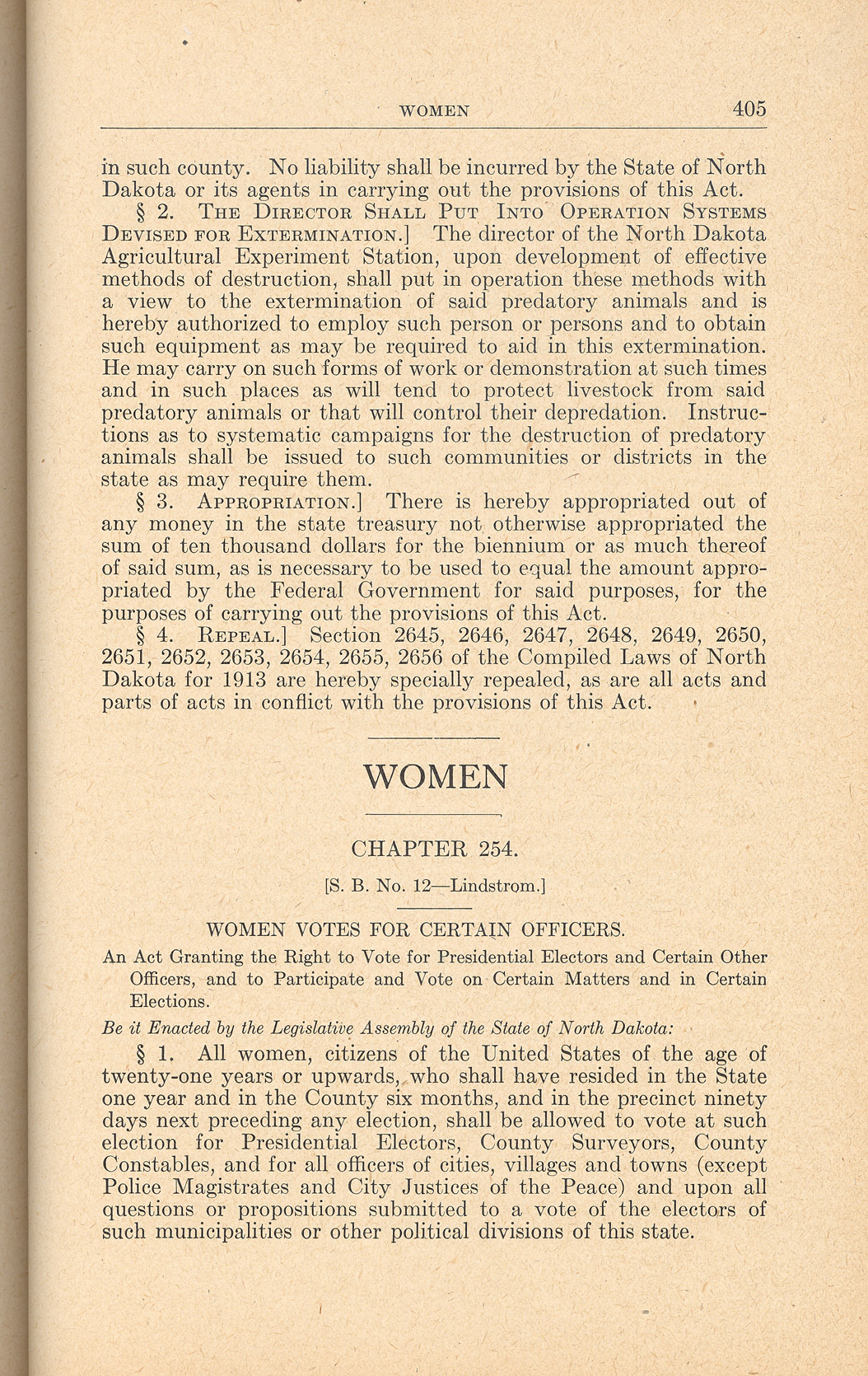 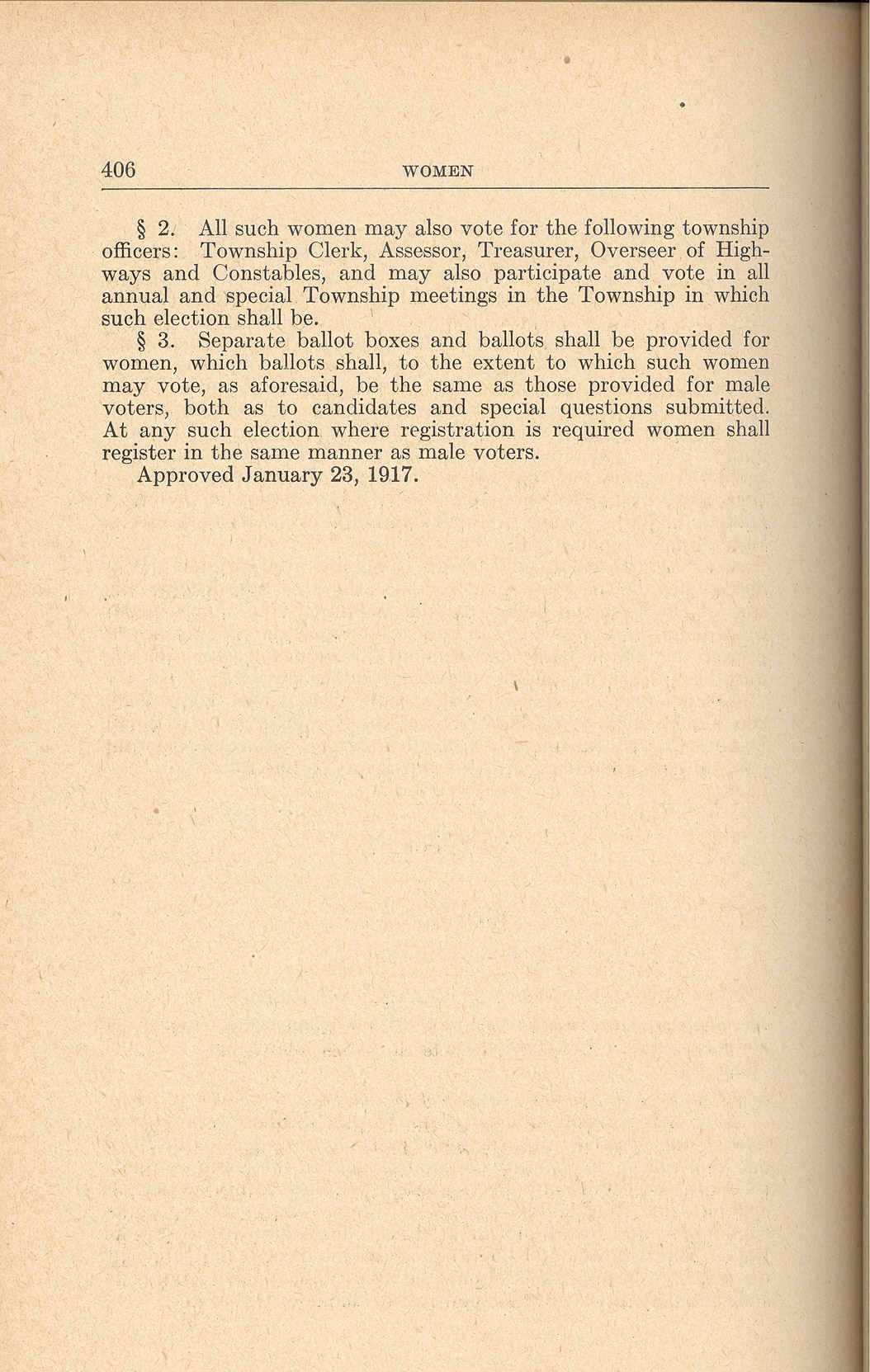 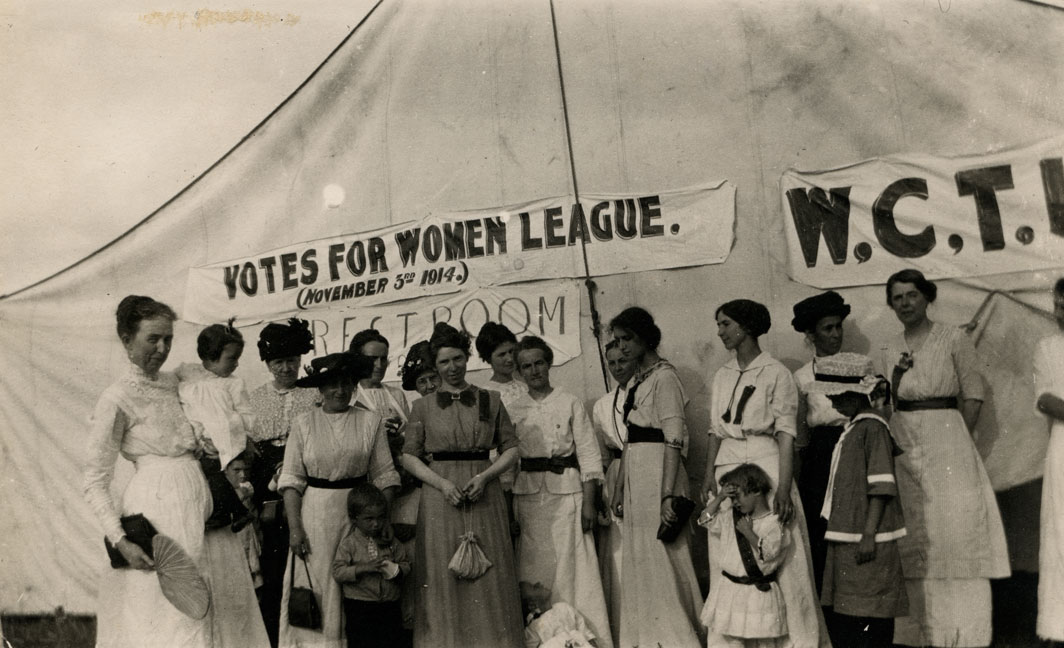 Image 2: The Votes for Women League organized in 1912 in Grand Forks and Fargo. During the 1913 and 1914 campaign to gain support for the 1913 woman suffrage law, they held rallies and handed out information all over the state. In this photo, the Votes for Women League has a tent at the 1914 Bottineau County Fair. By advertising a restroom within, they can be sure that many women and some men will stop by their booth. SHSND 10204.

Finally in 1912, a strong suffrage organization formed under the leadership of Dr. Cora Smith Eaton of Grand Forks. Another chapter of the Votes for Women League organized in Fargo. (See Image 2) In 1912, suffragists had the support of progressives, the Republican Party, and the Socialist Party. Democrats promised only to give suffrage some “consideration.” Nationally, the movement was picking up steam. Several western states passed woman suffrage bills and opponents had to admit there were no ill effects. 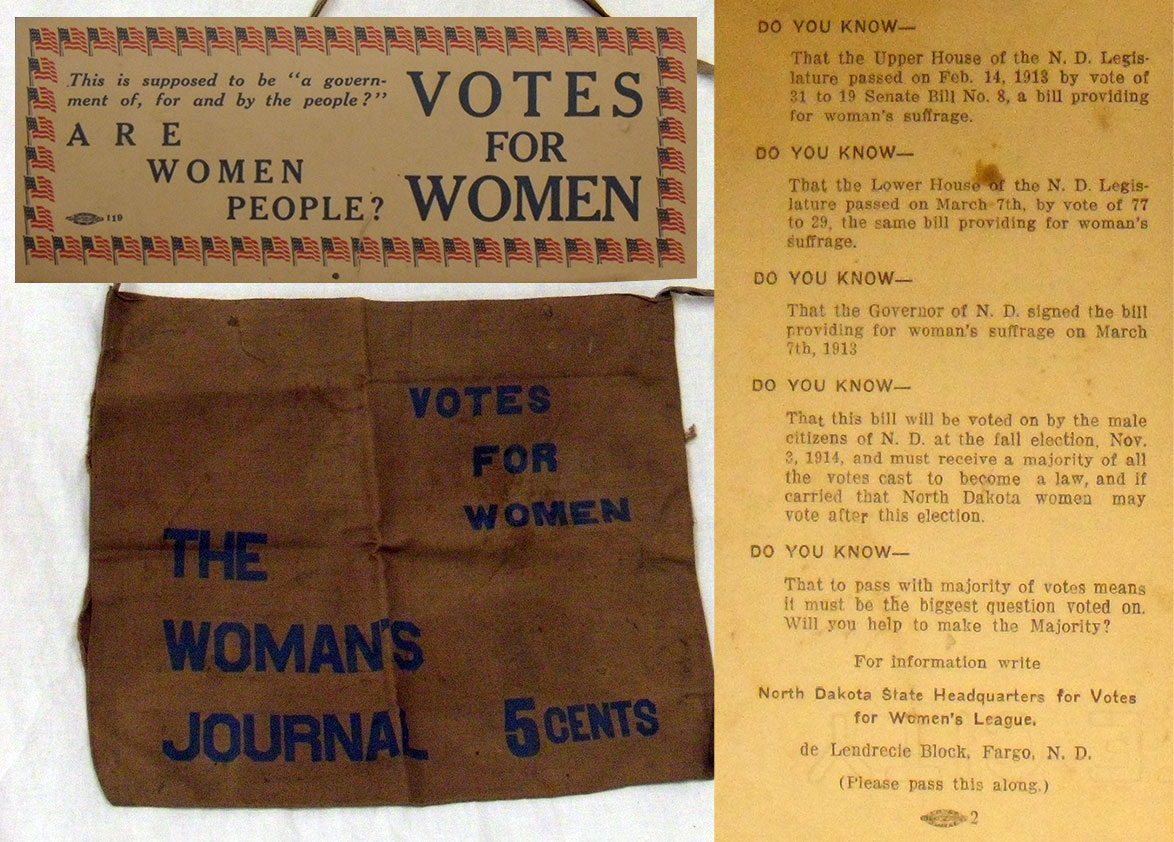 Image 3: In the campaign to win over the voters in 1914, the Votes for Women League sold subscriptions to suffrage journals, handed out literature, and tried to sign up more members. Members of the League tended to be well-educated, urban women. They stood on street corners with their bag of literature to speak to women and men who passed by. SHSND Museums 2010.124.1, 4, 8.

In 1913, a bill allowing women to vote finally passed both houses of the North Dakota legislature. (See Document 6) The legislature sent (referred) the law to the people for a vote in the 1914 general election.(See Image 3). The Votes for Women League worked hard for a good outcome in the election, but the vote failed by a vote of 40,209 to 49,348. Of course, only men were allowed to vote on the referred bill. 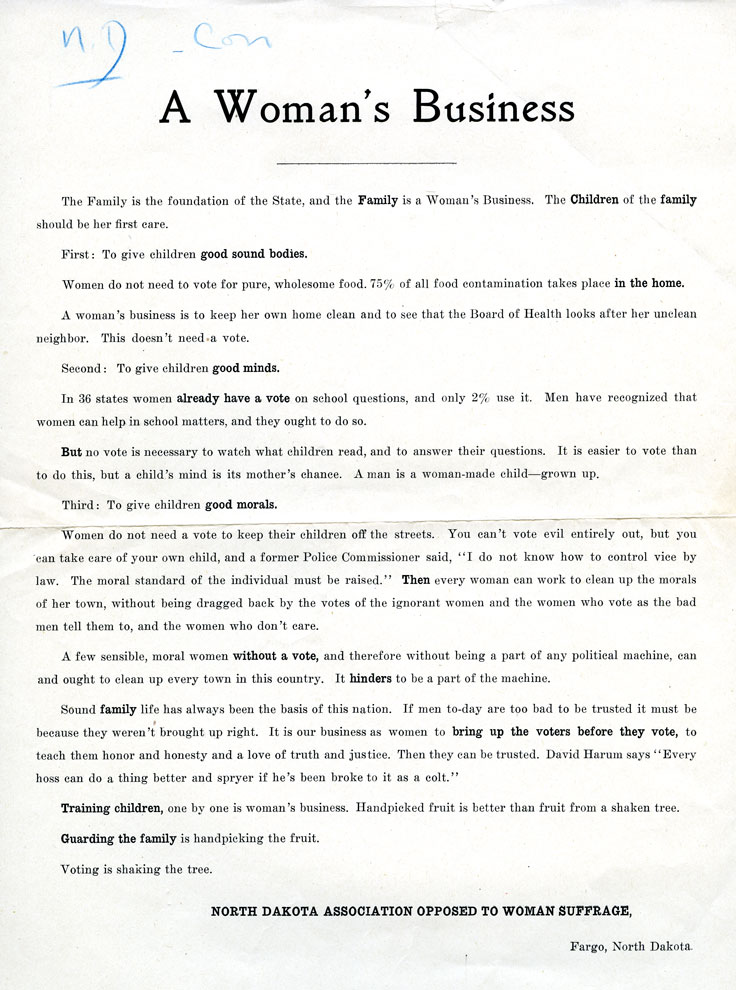 Image 4: The North Dakota Association Opposed to Woman Suffrage handed out literature explaining their position. They emphasized the important role of women in the home as mothers and wives. The Association argued that women’s roles in the family were actually an important political role, so women did not need to vote. SHSND 50189-7.

The people who opposed woman suffrage also worked hard and made sure their arguments were placed before the public. With financial backing from railroad and liquor industries, the Anti-Woman Suffrage League and the Association Opposed to Woman Suffrage advertised widely. (See Image 4) Some newspapers reported that women did not really want to vote. Neither the Democrats nor the Republicans backed the amendment.

Again in 1915, a suffrage bill was introduced in the legislature, but it did not fare well. However, in 1916, the Nonpartisan League (NPL) promised to support woman suffrage. The NPL believed in the equality of women in farm families, so it was reasonable that the NPL also backed woman suffrage. NPL leaders argued that women who could vote would be better mothers and more interesting wives.

When the legislature met in 1917, the House of Representatives was controlled by the NPL. The Senate was mostly Republicans with no affiliation with the NPL. The Votes for Women League presented newspaper editors with special material on woman suffrage. Suffragists were successful in getting newspapers in more than 40 North Dakota counties to print a special suffrage edition. The Votes for Women League wanted the bill to be written as a constitutional amendment and that it would include the right of women to vote in city elections. However, it was not written as an amendment to the state constitution. (See Document 7) 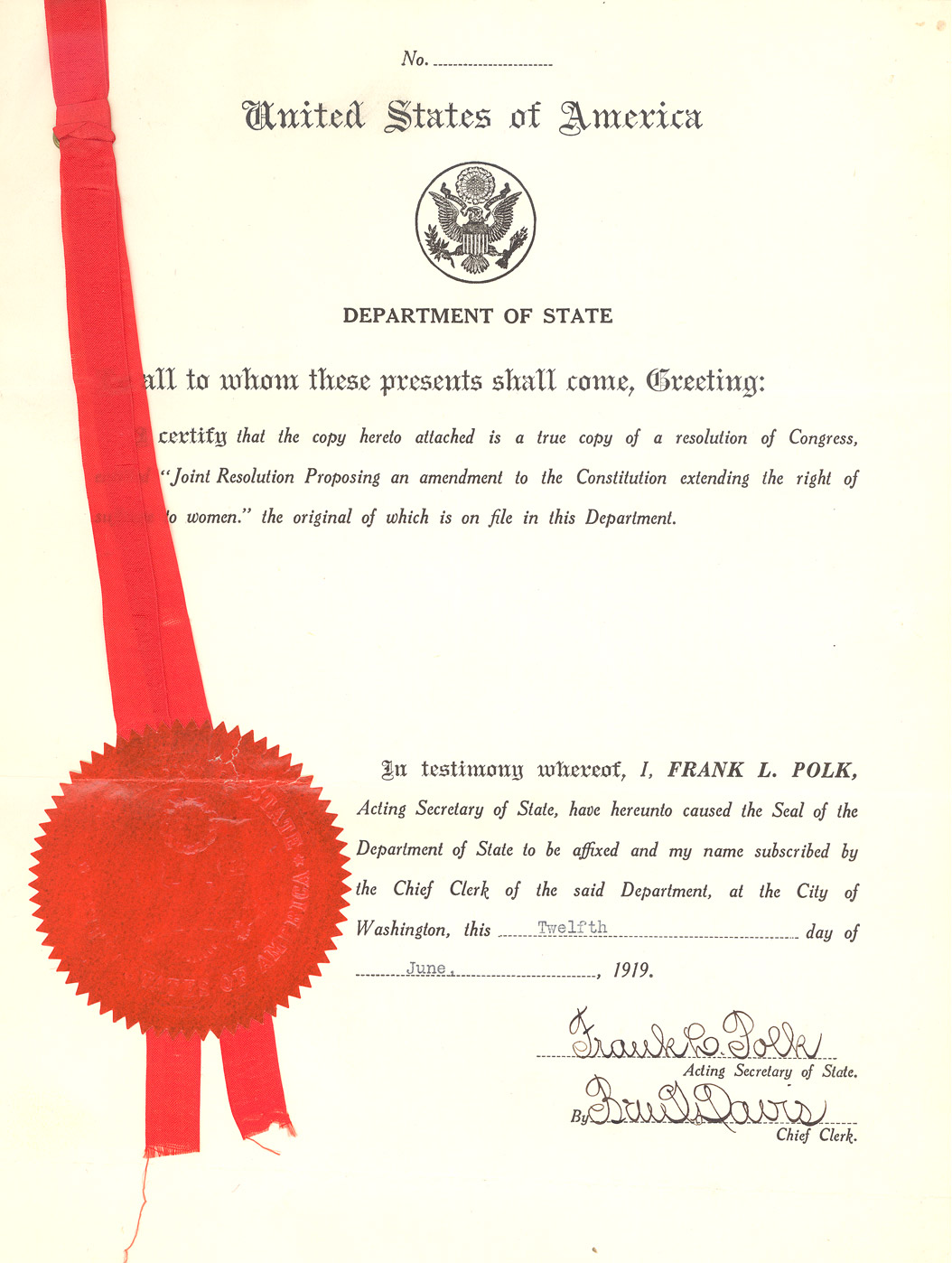 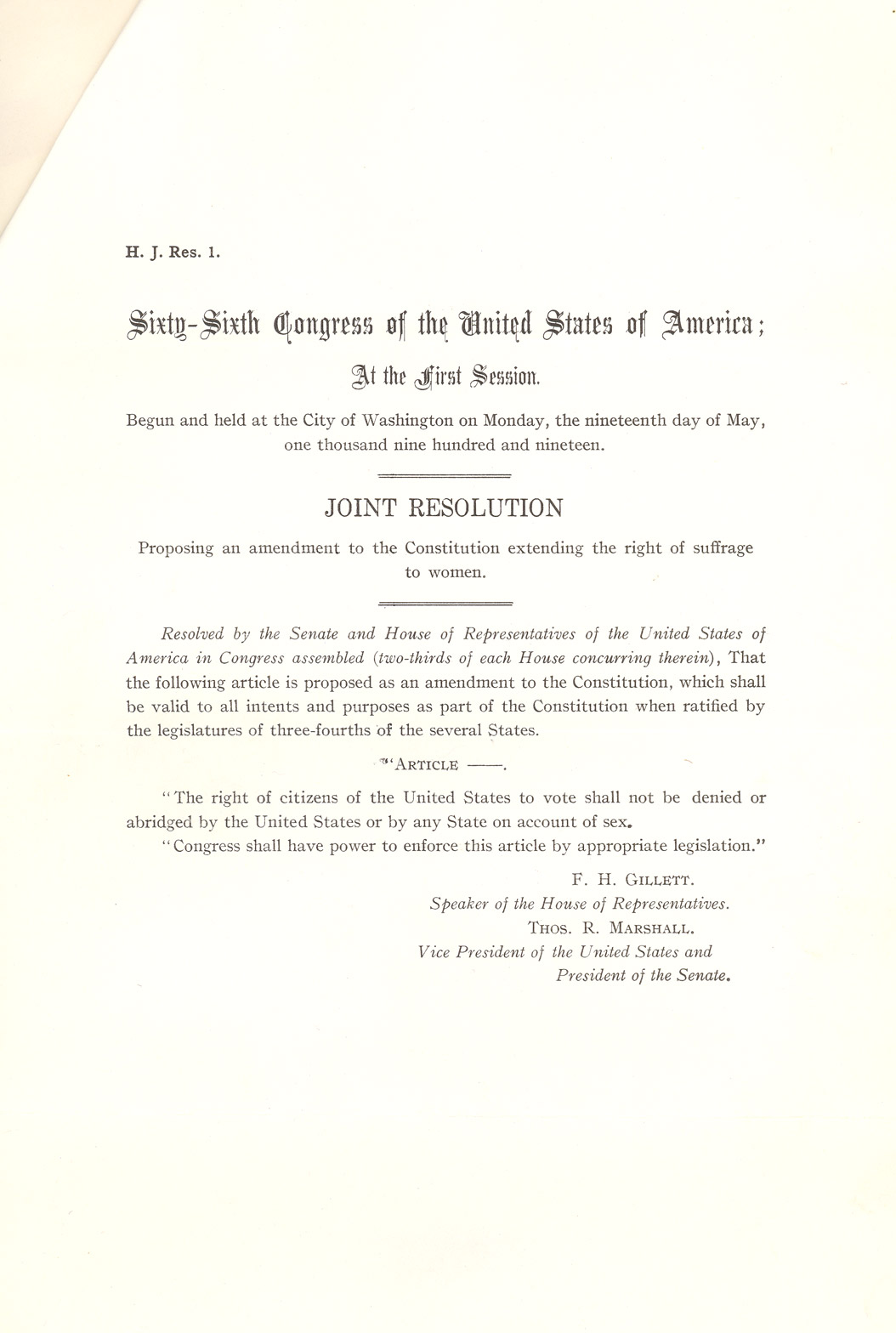 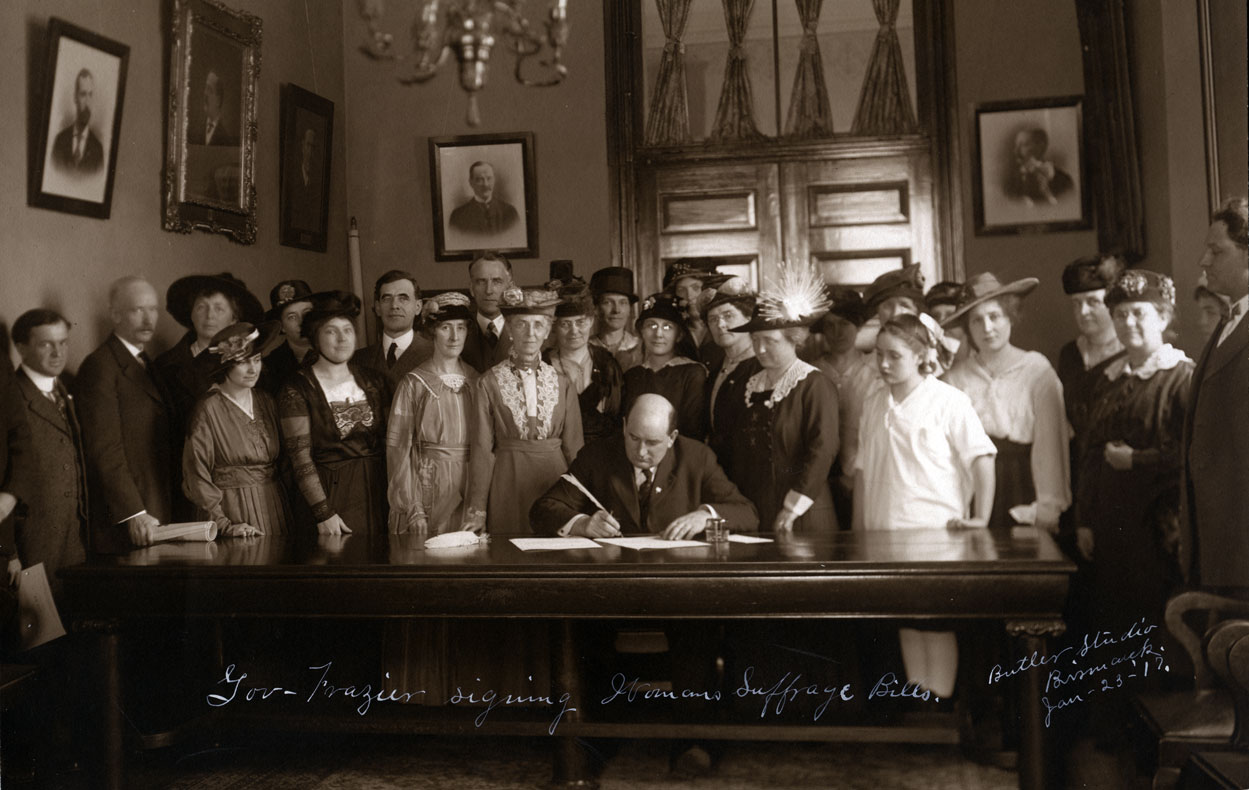 Image 5: Governor Lynn Frazier, a member of the Nonpartisan League, signed the 1917 woman suffrage bill into law. Standing by his right shoulder is Mrs. Elizabeth Preston Anderson. The young girl (second to the governor’s left) is Bonita Townley, the step-daughter of A. C. Townley, head of the Nonpartisan League. Mrs. Townley is on the girl’s left. The 1917 law gave women limited suffrage rights. SHSND C0278.

The 1917 bill passed through the legislature. The legislature did not refer the vote to the people, so it became law right away. (See Image 5) The 1917 suffrage law gave women limited suffrage which included voting for presidential electors, county officials, city officials (except police magistrate or justice of the peace), and township officers. Women could not vote for members of the legislature or for U. S. Senator or Representative to Congress. 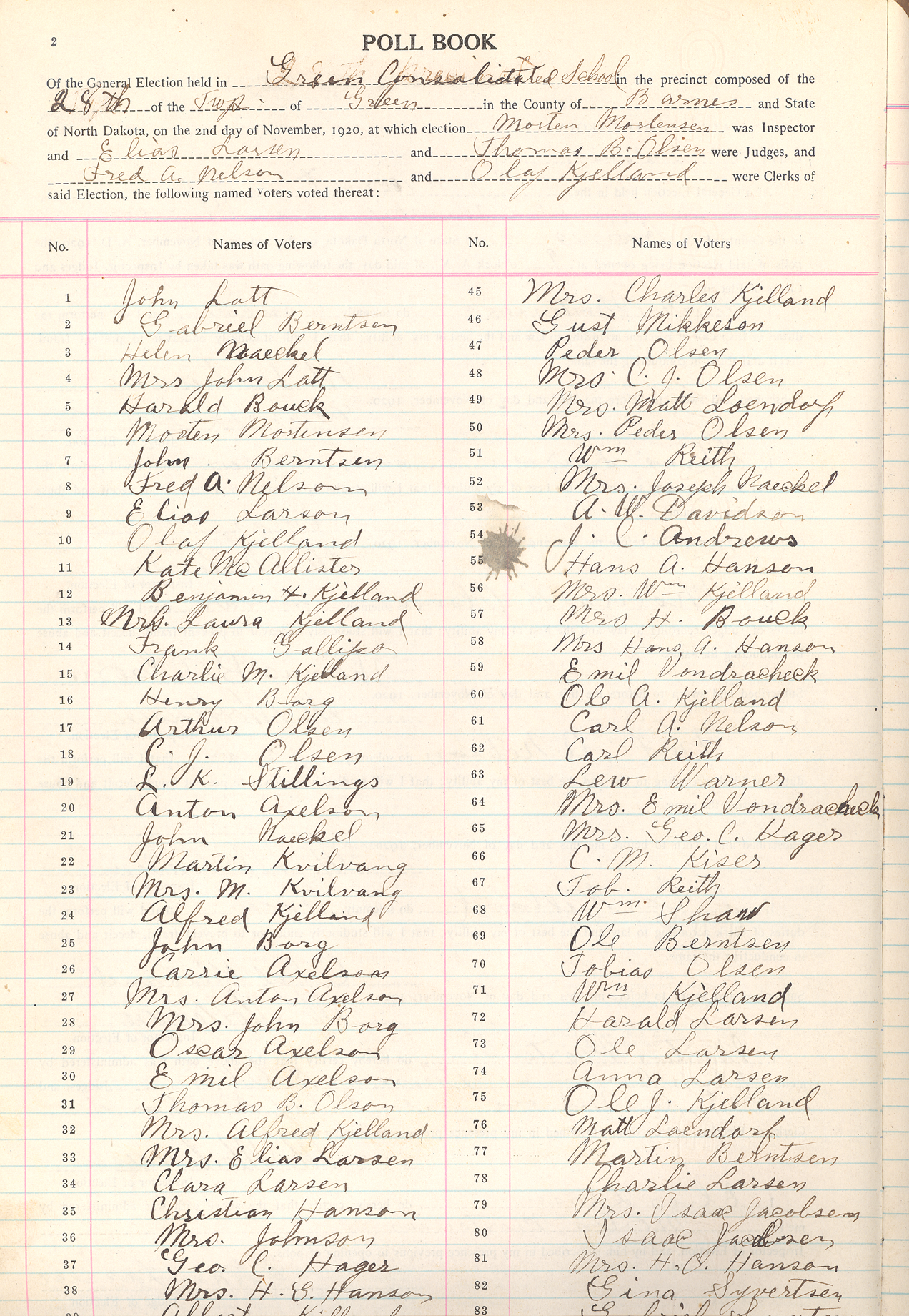 Document 9: In Green Township, Barnes County, the list of people who came to vote looked very different than the list of voters in 1916. In 1920, men and women voted on the same ballot. Approximately one-third of the names on this incomplete list are women. This is a much higher proportion of women voters than voted in the same township in 1916. SHSND Series 41132, Barnes County.

In 1919, Congress passed a Constitutional Amendment granting women full suffrage. When the vote was tallied on the floor of the Senate, the women watching from the balcony began singing the hymn known as the Doxology (“Praise God From Whom All Blessings Flow.”) As a constitutional amendment, the bill had to go to each state to be approved by either the legislature or a special convention. (See Document 8) The North Dakota legislature approved the amendment in 1919. The 19th amendment achieved final approval of the states on August 26, 1920. (See Document 9) Women, at long last, had equal voting rights with men in the United States.

Why is this important? Woman suffrage was a test of the theories upon which the United States was founded. Were all people really equal to one another? Was there really no such thing as political privilege based on wealth or family connections? If the answer to these questions was “yes,” then all citizens of the United States were entitled to a vote if they met the basic qualifications of age and residency.

From 1848, when women first organized for political equality, until the 19th amendment to the U. S. Constitution passed in 1920, all of the arguments against woman suffrage were examined and discarded. Women were not inferior to their husbands. Women were not corrupted by voting. Women would not neglect their husbands and children if they went to the polls to vote.

Though the United States had yet to deal with other suffrage issues, particularly the voting rights of African Americans and American Indians, the passage of woman suffrage laws was a major step toward realizing the promise of the Declaration of Independence.