DroughtDrought is officially defined as “continued lack of moisture, so serious that crops fail to develop and mature properly.” However, the severity of drought depends not only on rainfall, but on temperature and wind. High temperatures and high winds tend to pull moisture out of crops. When wind, heat, and lack of precipitation combine for a long time, the drought can be very severe. is a serious climate issue in North Dakota. It can cost farmers an entire summer’s crop. Drought can force ranchers to sell their livestock because there is no grass for feed. Drought can reduce surface water in ponds and rivers.

Drought, however, is also very difficult to identify. Some weather experts call drought a “creeping phenomenon” because it is very hard to tell when it starts and when it ends. In addition, drought may be localized. A county may be suffering from drought while the neighboring county has sufficient moisture.

Document 7: Drought by Bavendick. In 1952, a meteorologist named Frank Bavendick compiled a book of weather data for North Dakota. His book includes this section on drought and notes the extent of the drought in particular years. Bavendick, Frank. Climate and Weather in North Dakota. Bismarck: U. S. Weather Bureau Office and North Dakota State Water Conservation Commission, 1952. 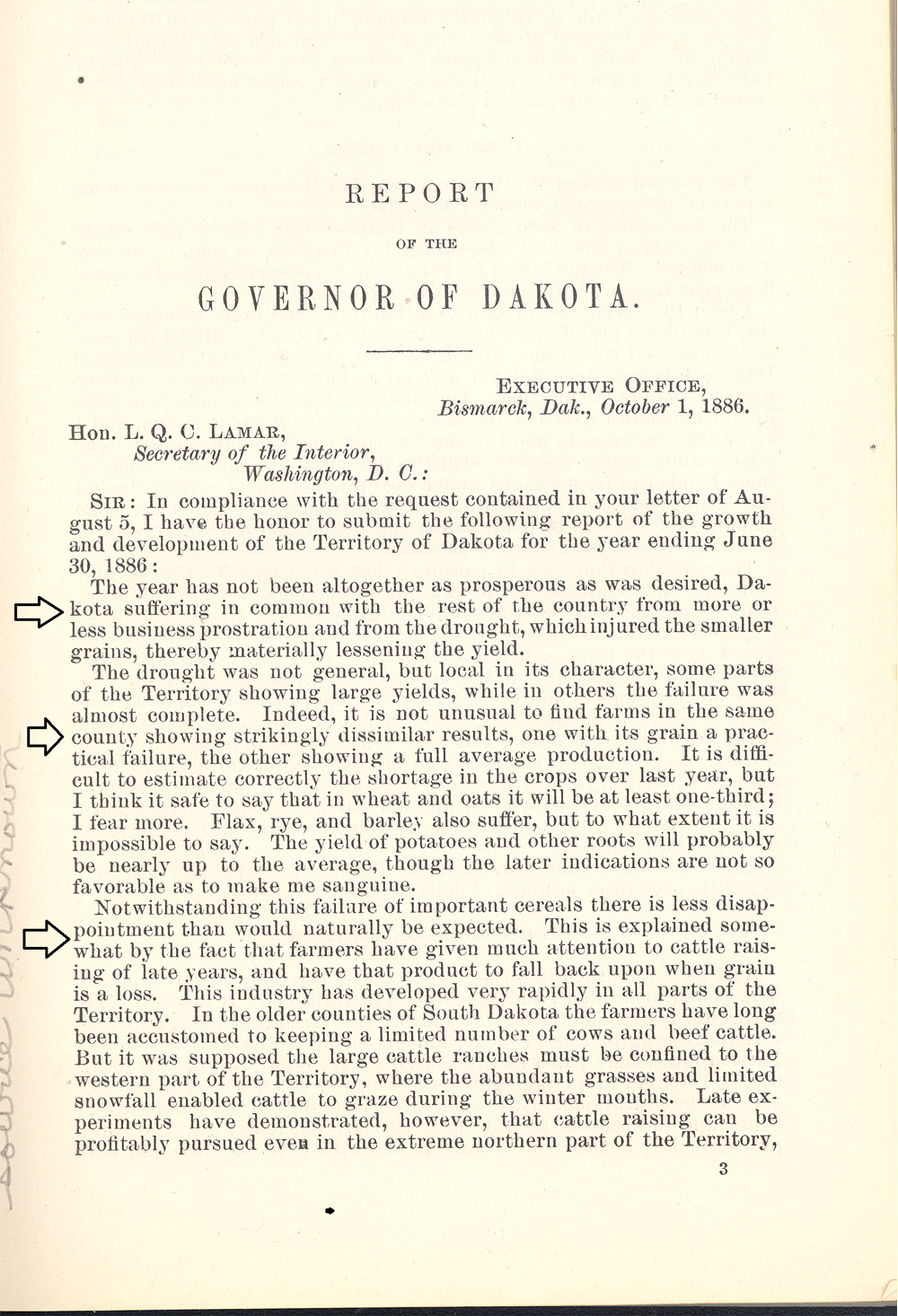 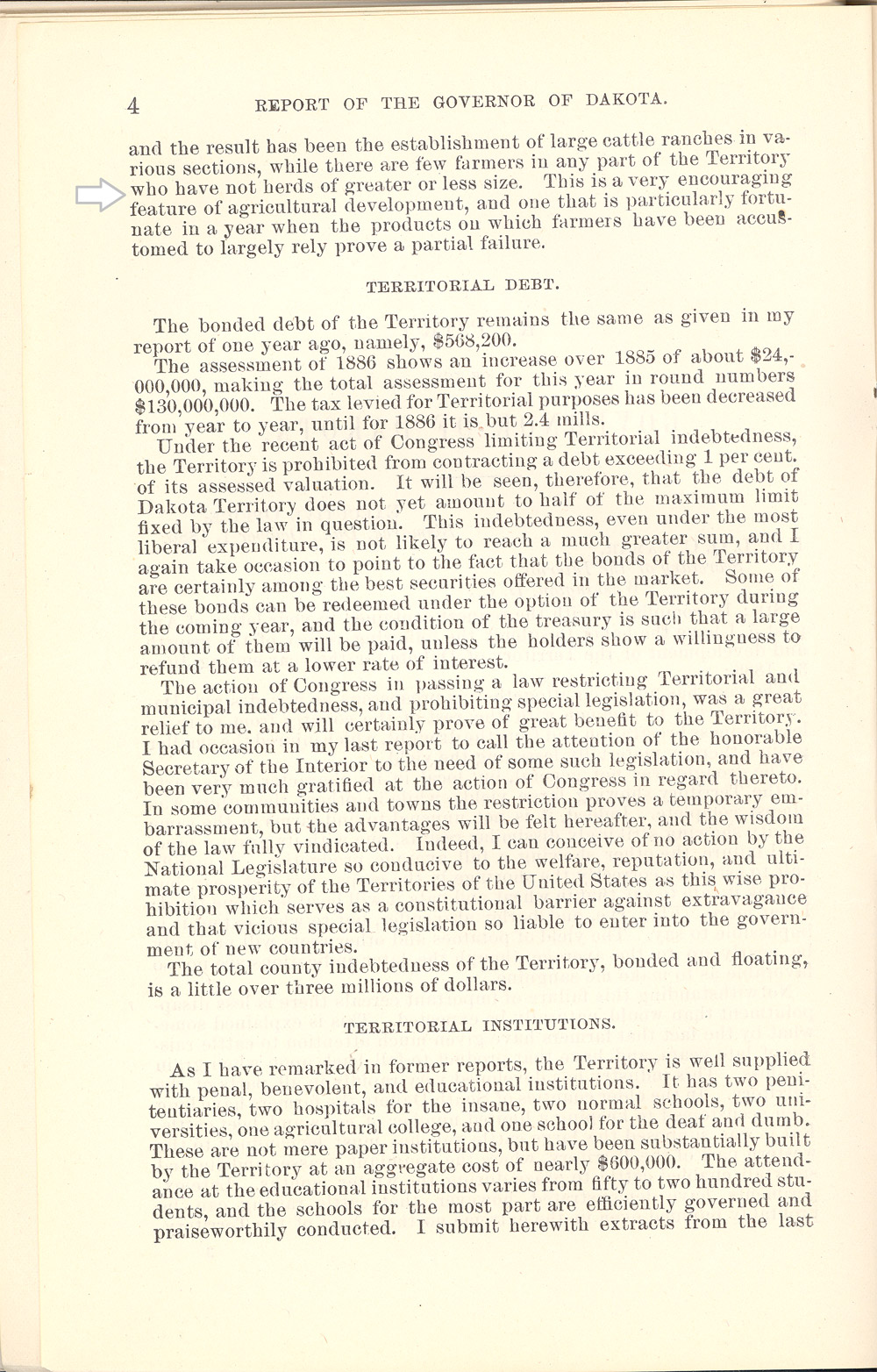 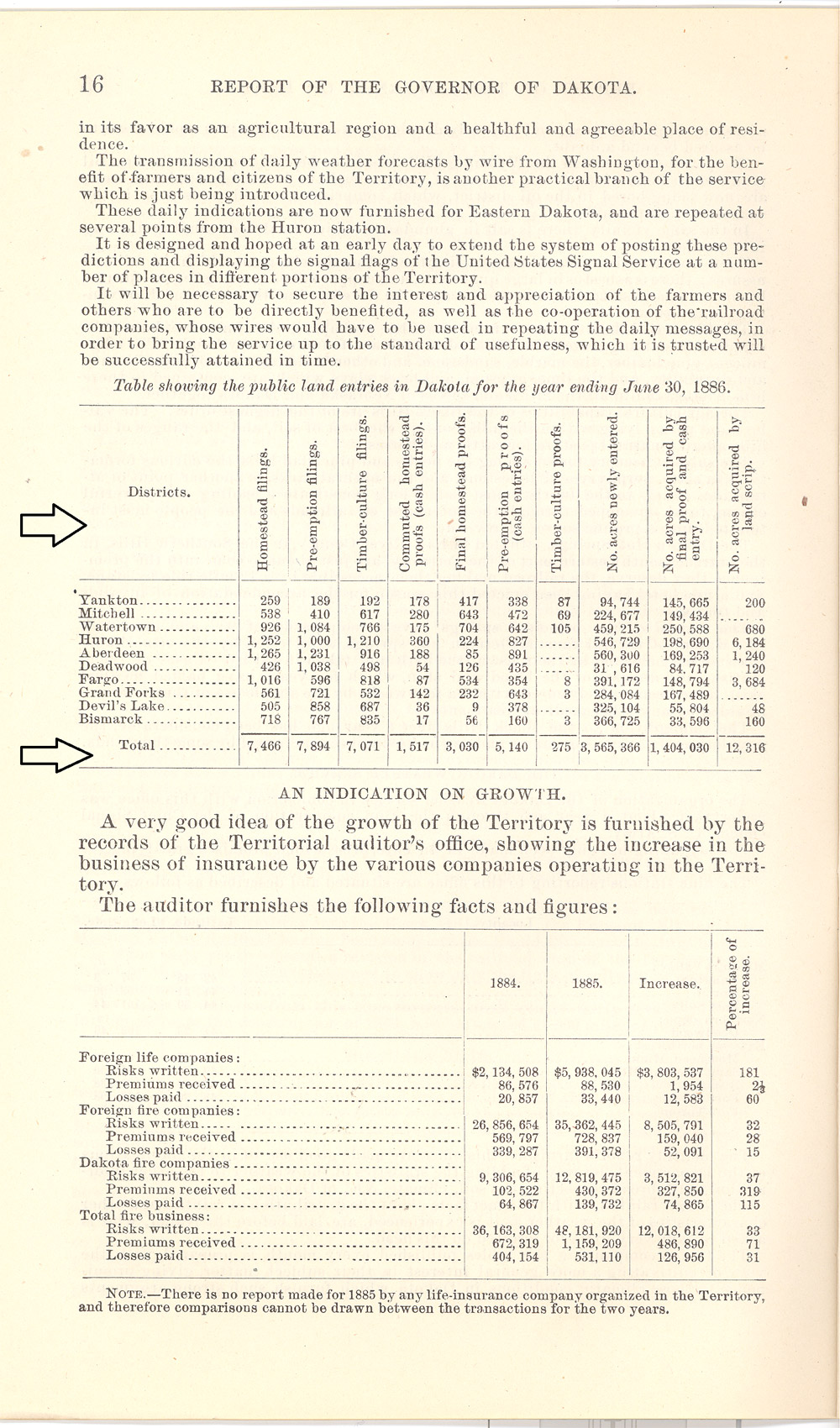 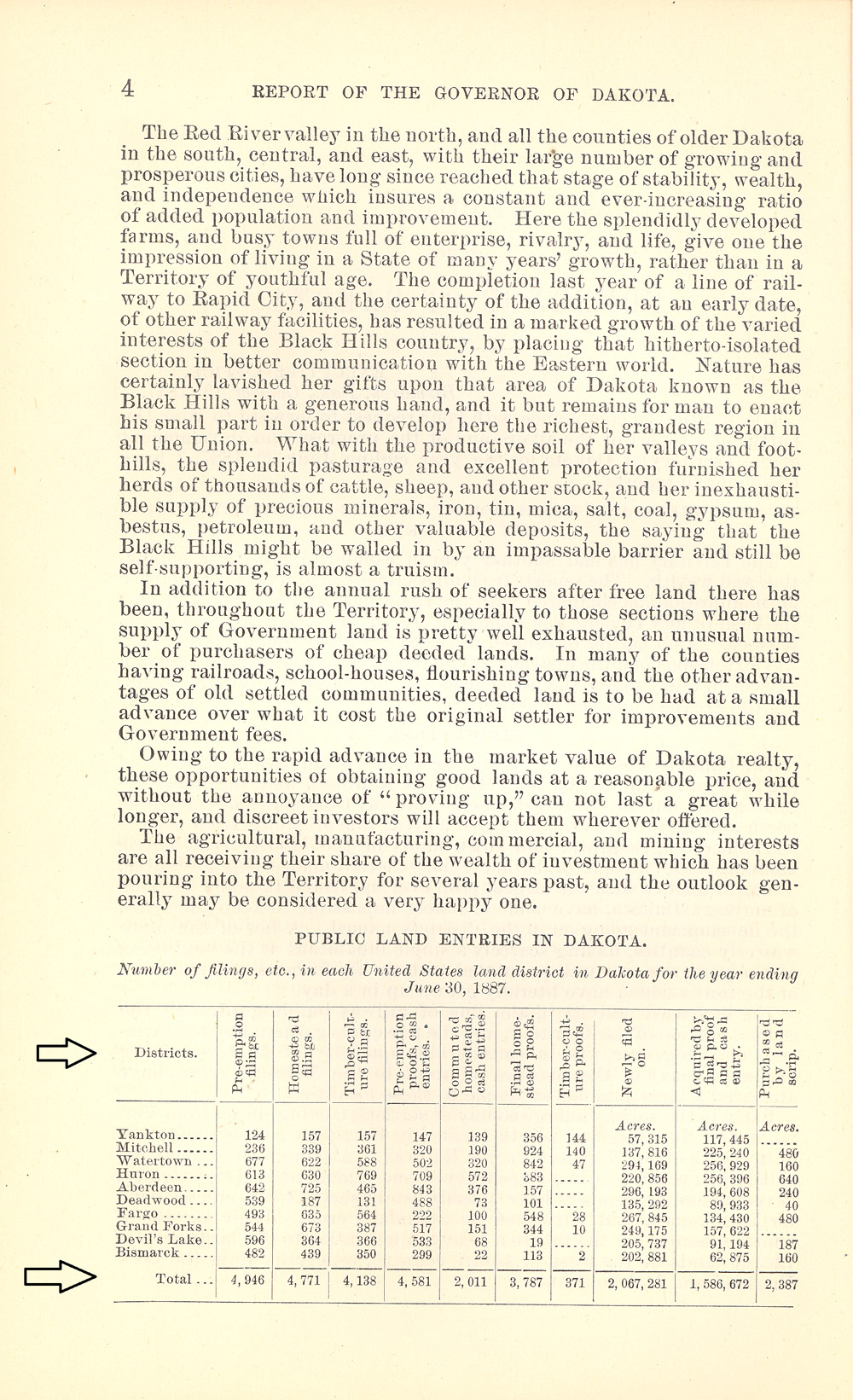 There were several years of drought between 1870 and 1930. But there was only one drought that lasted a long time. Between 1886 and 1895, there were four years of severe drought and a few years of moderate drought. (See Document 7)

The drought of 1886 was particularly important because it brought an end to the Great Dakota Boom. During the boom years, thousands of people moved into northern Dakota Territory to homestead or purchase land. The early years of settlement were a time of plenty of rain. However, in 1886, the wheat crop ran about one-third less than expected. When drought persisted and crops failed several times, some people left their farms. Fewer people wanted to move their families to Dakota Territory. Since farming was the most important occupation in Dakota Territory, the drought served to slow down immigration. (See Document 8) 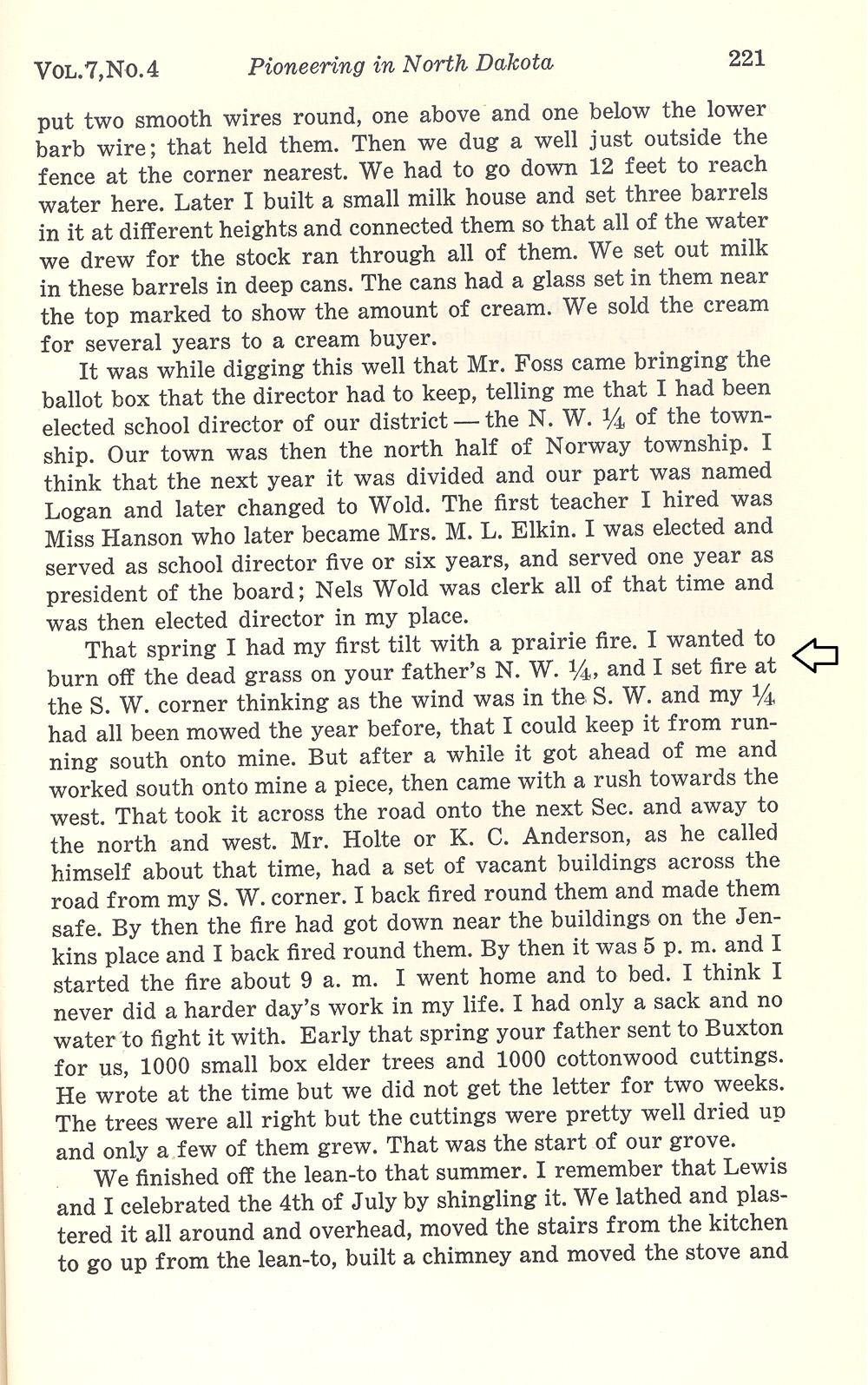 Document 9: Hobart on prairie fire. Charles Hobart claimed land near Cummings, North Dakota in 1881. Many years later, he wrote letters to his nephews about the pioneering experience that Charles shared with his brother, the nephews’ father. During the drought of 1886, Hobart started to burn old prairie grass, but it got out of control and burned through much of two quarter sections. Charles H. Hobart, “Pioneering in North Dakota” North Dakota Historical Quarterly Vol. 7, No. 4 (July 1933): 191-227.

Drought keeps bad company. One likely problem associated with drought is prairie fire. Prairie fires were common in early spring and late summer almost every year during the settlement era. During periods of drought, however, prairie fires burned more frequently destroying more acerage. (See Document 9) Prairie fire was a common and dangerous enemy to farmers and towns in North Dakota. In order to prepare communities to suppress prairie fires, the legislature passed a law in 1893 explaining exactly how counties should be organized for fighting prairie fire. (See Document 10) 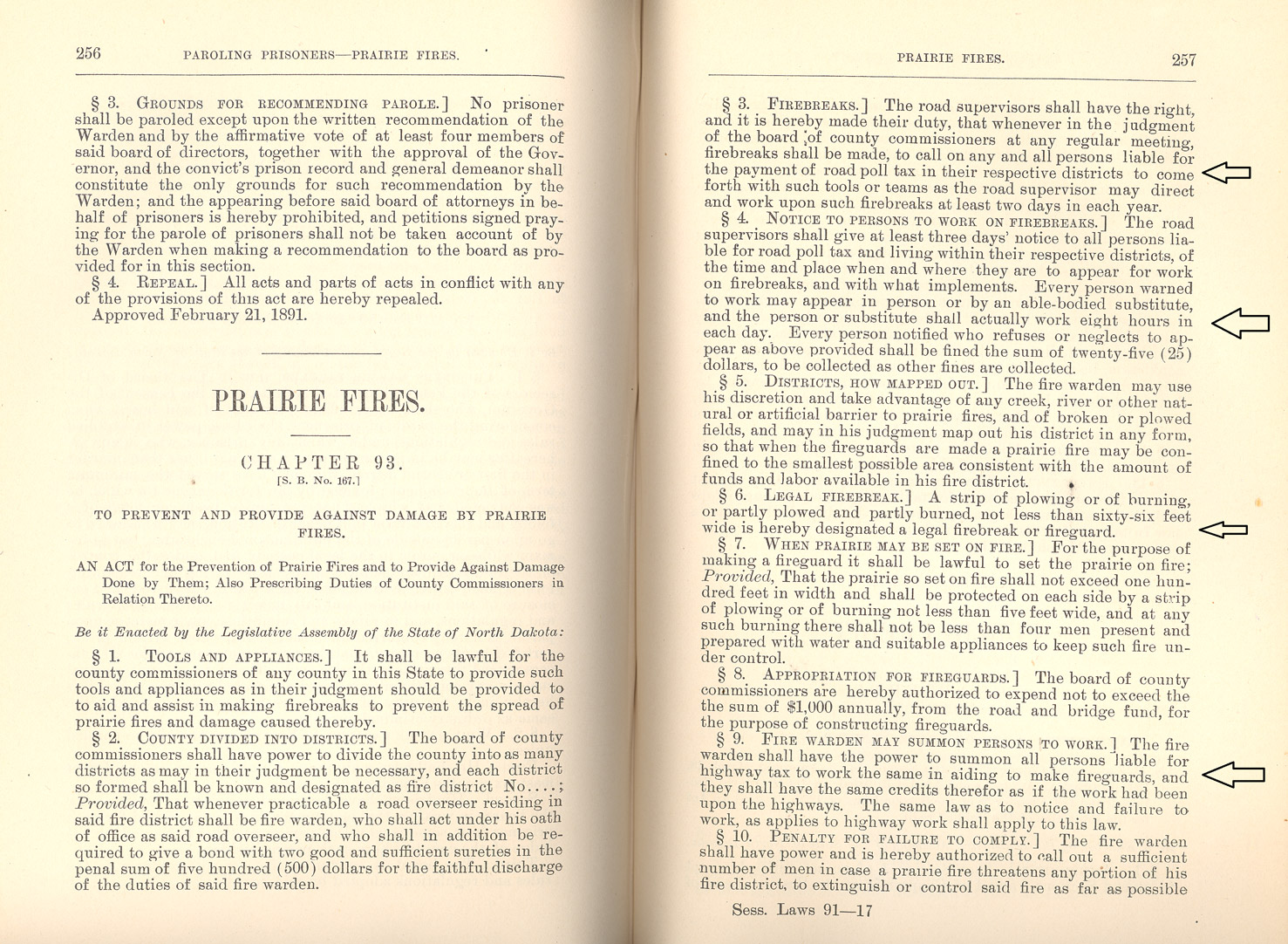 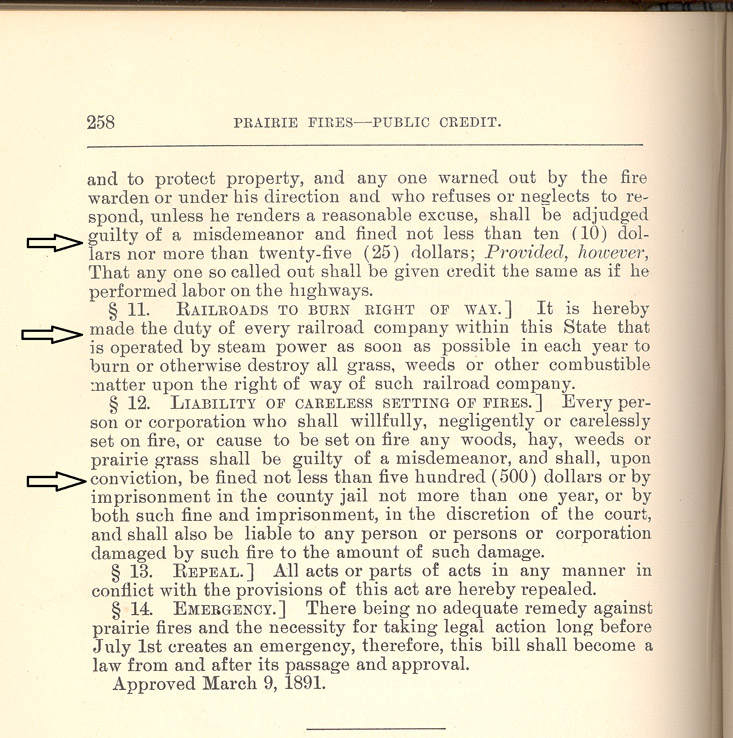 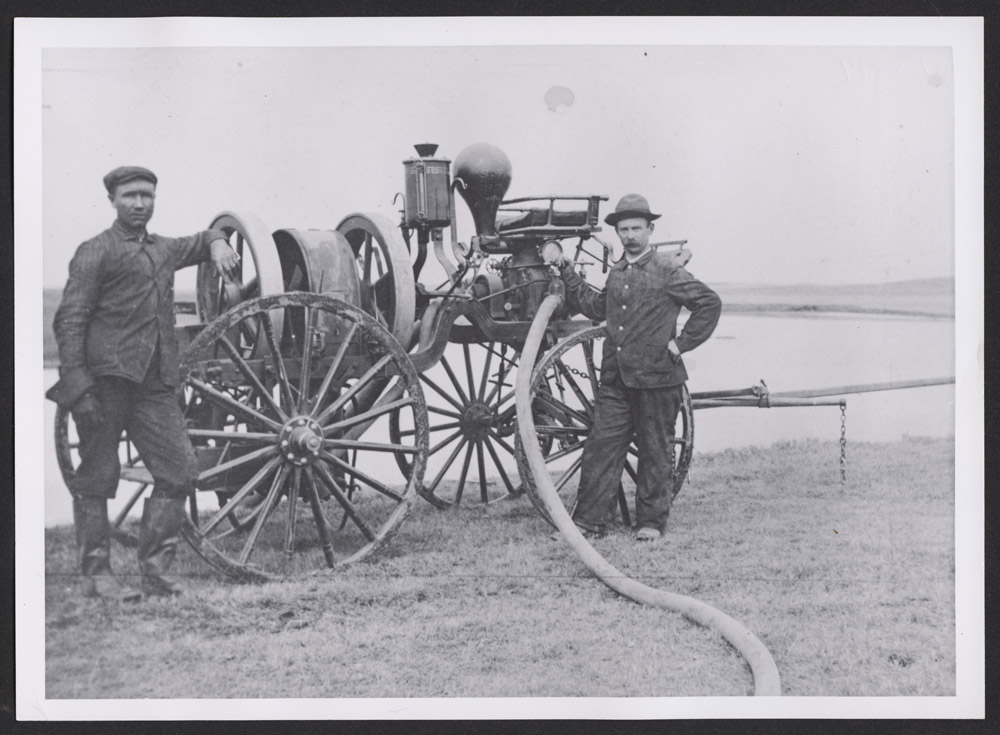 Image 11: This fire engine was in use in the town of Scranton. This wagon had a pump to pull water from a lake (in the background) into the hose to pour on the fire. The wagon was pulled by horses or men. It was not likely that such modern equipment was available to fight fires in rural areas. SHSND 0008-019. 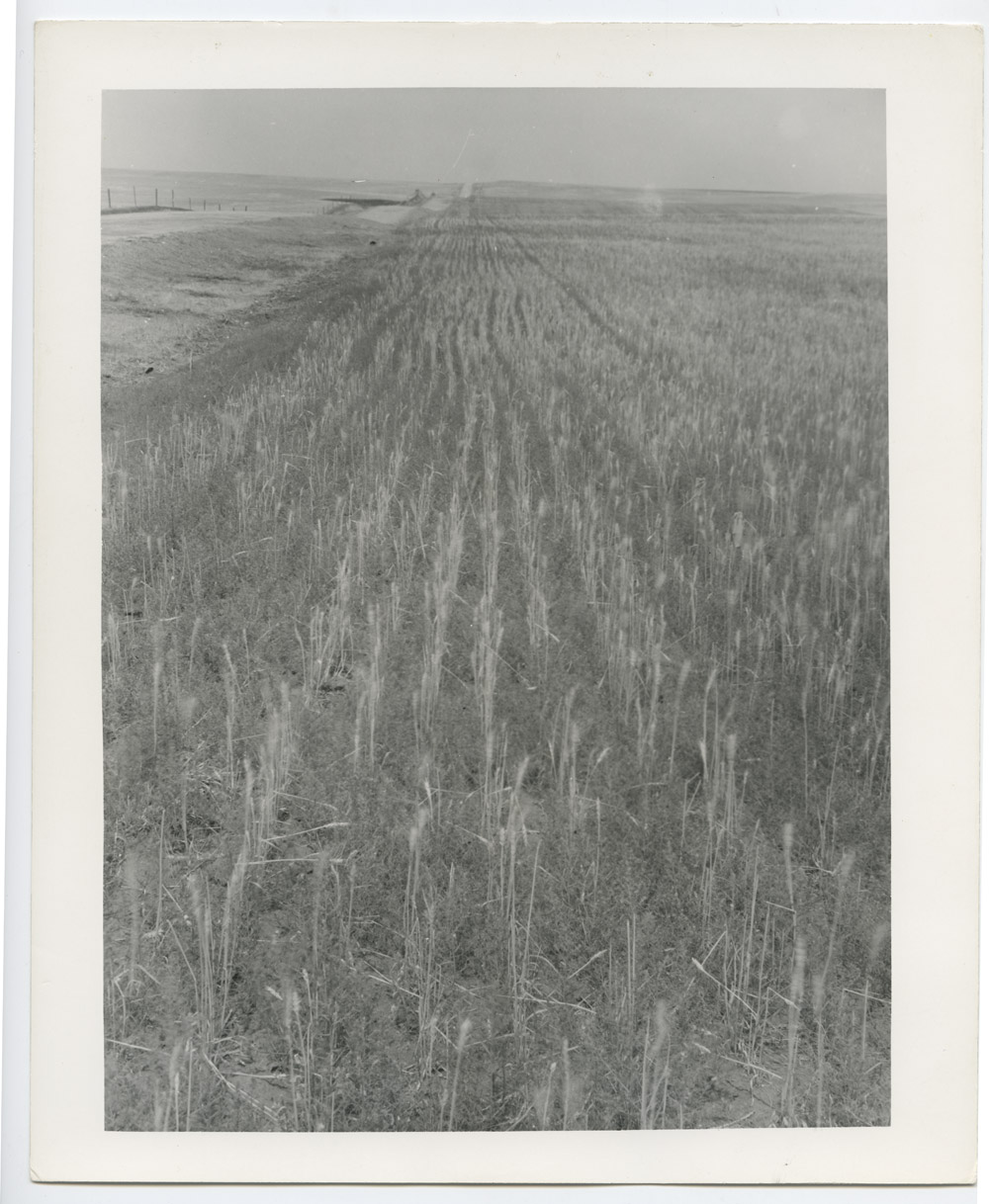 Image 10: 0075-0043. Grain planted in a drought year might find enough moisture deep in the soil to sprout and grow. However, if rain does not fall at the right time, the grains will not thrive. This photograph shows wheat has been stunted by drought. Weeds, however, are growing in the soil around the wheat stems. The weeds steal the moisture from the wheat plants. SHSND 0075-0043. 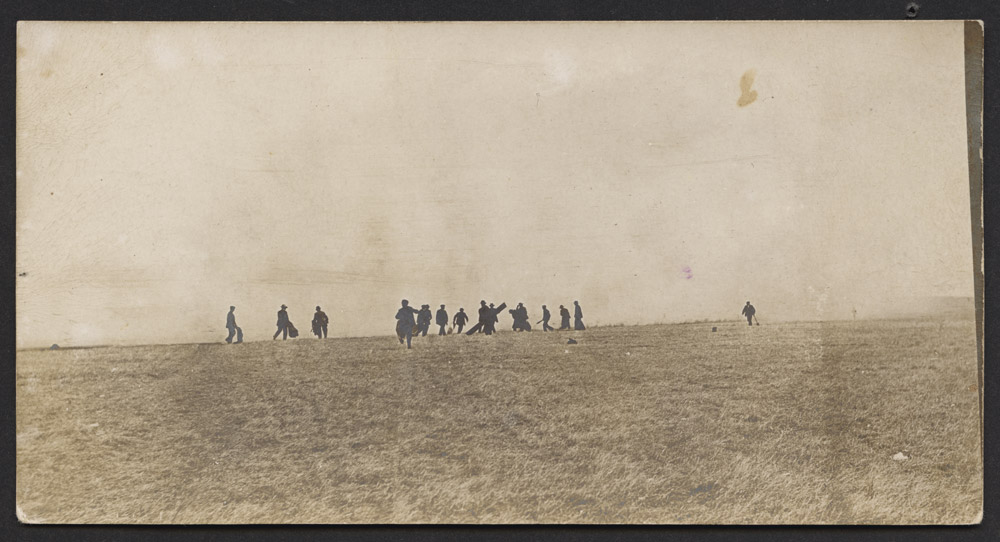 Image 12: A prairie fire in a rural area in the 1880s or 1890s depended on hard work and many hands for control. These people are hurrying to beat the fire out with wet gunny sacks, hoes, and shovels. If they can’t control the fire, it might burn up houses, barns, hay stacks, and crops in the fields. Many pioneers routinely plowed fire breaks around their houses and hay stacks to avoid losing their summer’s work to a prairie fire. SHSND 0175-0034. 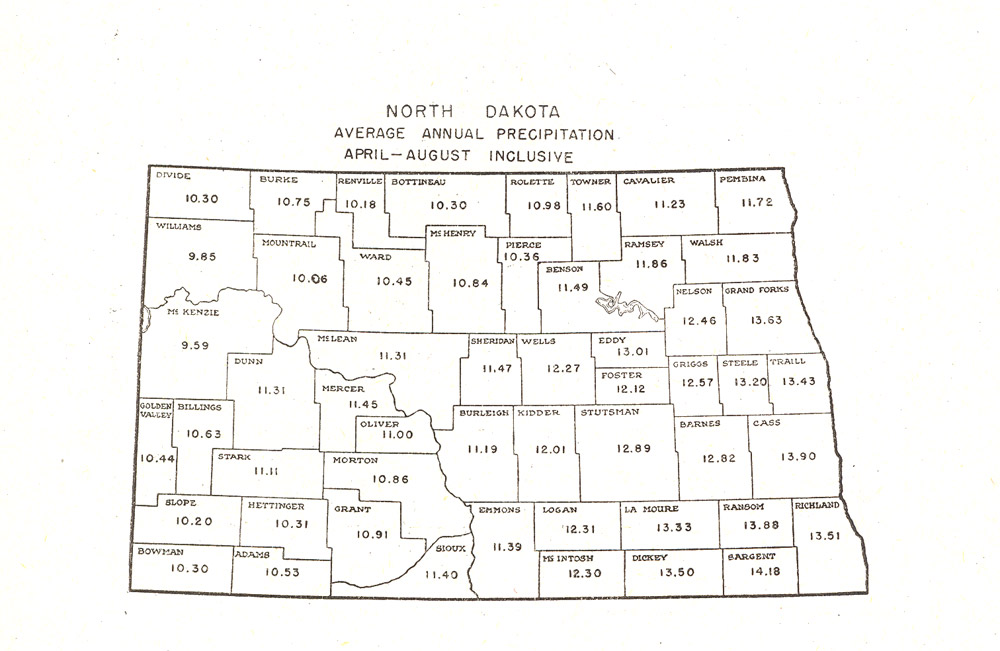