Document 2. General Alfred Sully led his troops from the battle site at Killdeer Mountain to the confluence of the Missouri and Yellowstone Rivers in the summer heat of 1864. The soldiers had little water to drink and they were attacked frequently by Lakotas who hoped to drive the soldiers from their land.

Sully reported to his superiors that of all of their hardships that summer, grasshoppers appeared to be the worst. In his report to the Secretary of War, Sully wrote:

“The only thing spoken about here is the grasshopper. They are awful. They actually have eaten holes in my wagon covers and in the tarpaulins that cover my stores. A soldier on his way here lay down to sleep on the prairie in the middle of the day – the troop had been marching all night. His comrades noticed him covered with grasshoppers and awakened him. His throat and wrists were bleeding from the bites of the insects.”

Document 3. In 1883, Johanna Kildahl came to eastern Dakota Territory with her parents and siblings. Many years later, after growing to adulthood on the prairie and moving on to other places, she returned to North Dakota to give a lecture on her pioneering family’s experiences. In this passage, taken from that speech, she describes the prairie near Churchs Ferry in Ramsey County as she first saw it. The editor has kept Kildahl’s spelling and punctuation. The Latin name of blazing star is Liatris. The Ermine Mantle is snow.

The prairie had a great charm before it was put under cultivation; it was a pageant of color from spring until fall. In the early spring the dainty lavendar of Pulsatilla Americana or the Pasque flower with the blue of the violet shading into the pinks of the prairie rose and white of the dainty Gallium Boreala or bedstraw, the blue of the Campanula or blue bell into the purple and gold of the wild asters, goldenrod, Gaillardia or blanket flower, different species of Helianthus or wild sunflowers, Grindelia or gum plant, wild tiger lily, Lacinaria or blazing star, and other more sturdy flowers of the deeper late summer and fall tints, the yellow, browns and reds of the grasses and small shrubs, until winter covered all with Ermine Mantle. It may be of interest to some to know that later, before the prairie was entirely gone, I collected identified and pressed 750 different species of flowers, grasses and plants native to this region; they are now a part of the herbarium of our State University [NDSU]. I learned later that the Field Museum of Chicago would pay a good price for a collection of prairie plants as it is very rare. Botanists usually hie [get] themselves to the more picturesque and interesting mountain and seashore regions for collections. My many trips after the cows gave me an opportunity to observe the flora and fauna near the lakes; hidden in the tall grass I enjoyed watching great flocks of pelicans on the shore and dodging in and out among the tall Phragmites, usually called wild rice. I learned the ways of the plover, snipe, other most interesting birds and small animals; all new to me.

Document 4: Adams’ poem, What the American Eagle Thinks of Dacotah

Captain Enoch George Adams was an officer with the 1st U. S. Volunteer Infantry. The 1st U.S. was also known as Galvanized Yankees. Adams edited The Frontier Scout, the newspaper published first at Fort Buford and later at Fort Rice until the 1st U.S. was transferred back to the states in October 1865. 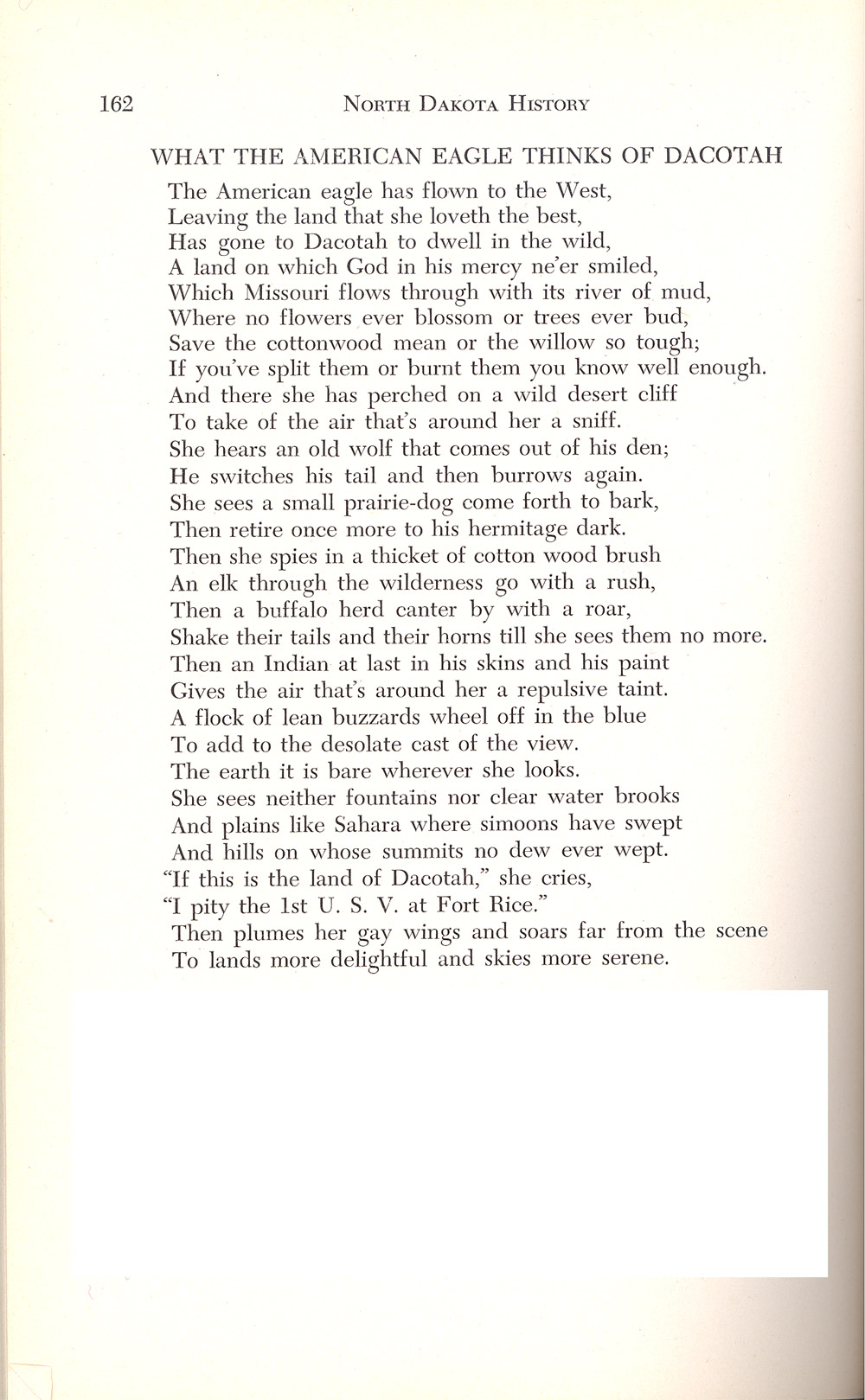 Adams often wrote poems for The Frontier Scout. He graduated from Yale in 1849, and enlisted in the U.S. Army in 1861. His service in Dakota Territory separated him from his wife, Mary, who remained at their home in Maine.

Adams’ poem, “What the American Eagle Thinks of Dacotah” (published June 22, 1865, in the Frontier Scout), might have been written when he was very lonesome and longing for the forests of his home state. It is certainly a negative description of Dakota, but he was in the territory during the very hot and dry summer of 1864, and the cruelly cold winter of 1865 when so many soldiers at Fort Rice died of scurvy.