In 1863, 1864, and 1865, General Henry Hastings Sibley and General Alfred Sully marched their troops into northern Dakota Territory. Their mission was to punish the Santee Dakotas for their role in the U.S.-Dakota War of 1862.

In addition to his military mission, General Sully had orders to investigate the land, animals, and plants of the region. The intention of exploration was to determine the economic value of the land for farming, mining, or other extractive industries. The question the Army sought an answer to was: Can this land support families living on farms or ranches?

General Sully assigned a soldier, Siegmund M. Rothhammer, to record observations of the landscape, minerals, plants, animals, and climate as the troops entered northern Dakota Territory in 1865. (See Map 1)   Rothhammer's official Army duty assignment was Hospital Steward. However, Rothhammer had trained as a naturalist and had quite a broad knowledge of plants and minerals. The previous year, he had assisted the Topographical Engineer (mapmaker and naturalist) Captain John Feilner. Both Feilner and Rothhammer were born in Germany, and like many young German immigrants, both men joined the Army to make a living and learn American customs. 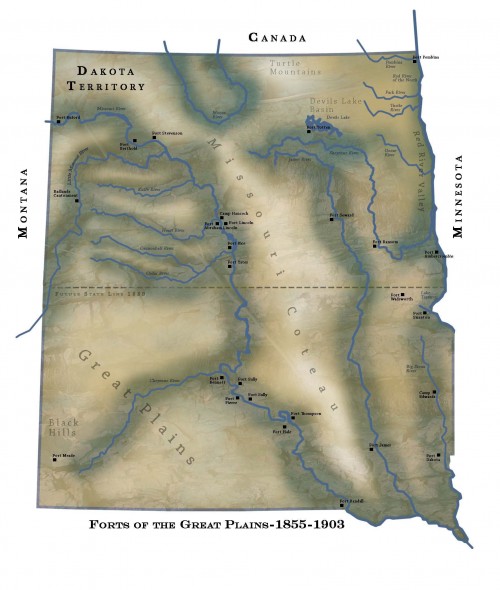 Map 1: Forts of Dakota. Rothhammer traveled with General Sully’s command through central North Dakota in 1865. Only Fort Rice, on the Missouri, had been built at that time. The soldiers on Rothhammer’s mission slept in tents or on the open ground. The light area in the central part of North Dakota is about the same as the area of the Missouri Coteau.

Rothhammer had some very positive things to say about northern Dakota Territory. He said that there are resources including coal and water that would support American farmers and small towns. He did not spend a winter on the northern plains, but he found summer quite interesting. His report reveals that he enjoyed Dakota. Eugene Marshall of Minnesota, an assistant to General H. H. Sibley, later read Rothhammer’s report and added some of his own observations.

Marshall was most concerned that Rothhammer gave too little attention to the Missouri Coteau. The coteau (a French word meaning little hills) is located east of the Missouri River and west of the Red River Valley. Today this area is sometimes called the prairie pothole country and it is well-known as a haven for both migrating and local birds. Marshall described it carefully. His report is still an excellent description of that region.

The editor has retained Rothhammer’s spelling, but has added punctuation to help clarify his meaning. Some explanatory words have been added in brackets [ . . . ]. The editor has chosen not to include copies of the report in its original form because the copy quality is extremely poor.

Why is this important?  Soldiers’ observations of the western landscape were considered as important as the military mission. The Army, Congress, and the President wanted to know how much water was available, where transportation routes could be located, and if the soil and climate could support agriculture. Marshall’s report is scientific, while Rothhammer’s report goes directly to the interests of farmers. Rothhammer considered both industry and farming in his report. Concerning agriculture, though, Rothhammer had some doubts. Because of the distance from major cities and the somewhat unfriendly climate, he did not think farmers should hurry to claim land in northern Dakota Territory.

Both of these reports tell us how the area that is now North Dakota appeared to newcomers in the middle of the 19th century. These reports contributed to a growing body of knowledge about North Dakota which was useful to the Northern Pacific Railroad, the land surveyors, and people looking for a new place to live and work.