The climate has a great deal to do with how people lived in North Dakota which is the northernmost state on the Great Plains of North America. The Northern Great PlainsOf course, North Dakota was not a state or even called Dakota during this time period (1201-1860). However, because our study is limited to North Dakota, we will use that name to identify this place whenever necessary. The name Dakota Territory won’t be used until 1860, and North Dakota does not become a name for this place until 1889. If we didn’t cheat a little on the name, we would have to find another name to use. For our purposes, we will just use North Dakota. climate has been characterized by extremes of heat and cold and drought and rain for the last 2,000 years. Though early visitors often found the climate uncomfortable, people and animals adapted to the climate. (See Image 1.)

One of the best ways to learn about the climate of the distant past is to read the record of growth in tree rings. A tree’s growth is identified by rings that are formed every year. A dendrochronologist (DEN dro kron AH lo jist) can take a core sample of a tree and count the rings to determine the tree’s age. The scientist can also measure the width of the rings: very narrow rings indicate drought and wider rings indicate years of adequate moisture. However, North Dakota did not have a lot of trees after the ice ages, so tree rings are of limited help. Using data from other parts of North America, some data on world-wide climate trends, some tree ring evidence, and the historic record, we can learn a few things about the climate of North Dakota in the pre-historic (1200-1700) and historic (after 1700) years. 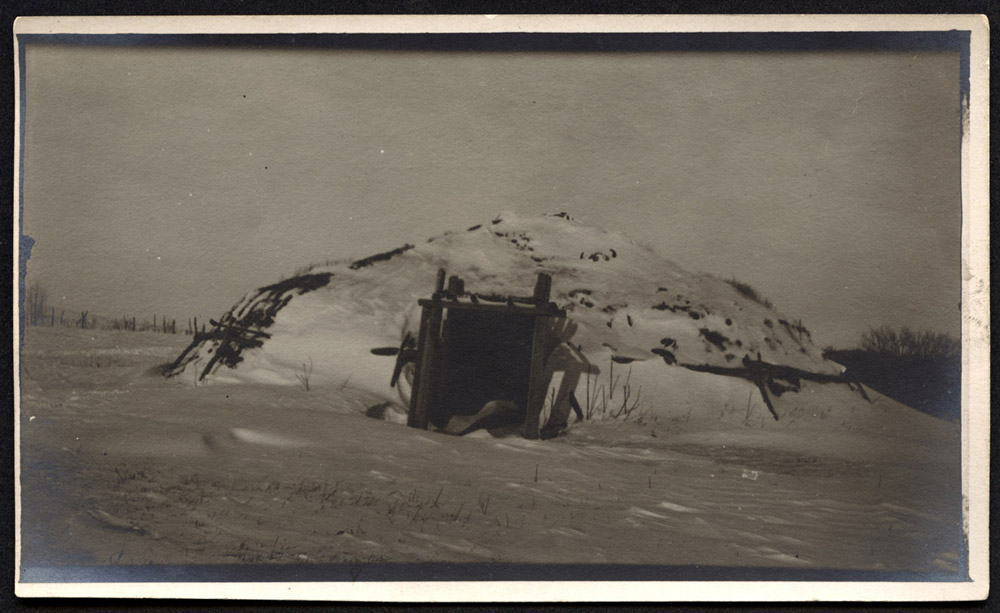 Image 1: The Mandans, Hidatsas, and Arikaras lived in houses made of logs, sticks, and grass covered with earth. Earthlodges were warm in the winter, cool in the summer, and unlikely to burn in a prairie fire. Earthlodges are a good design for shelter on the northern Great Plains. SHSND 0086-0953.

From 1300 to 1850, there were were long periods of temperatures that were cooler than years before or after these centuries. The average temperatures declined more than two degrees Celsius. This period of colder than normal temperatures is called the “Little Ice Age.” Glaciers on the polar caps and in the mountains grew larger than they had been since the end of the Pleistocene Age (about 10,000 B.C.) (See Image 2.) 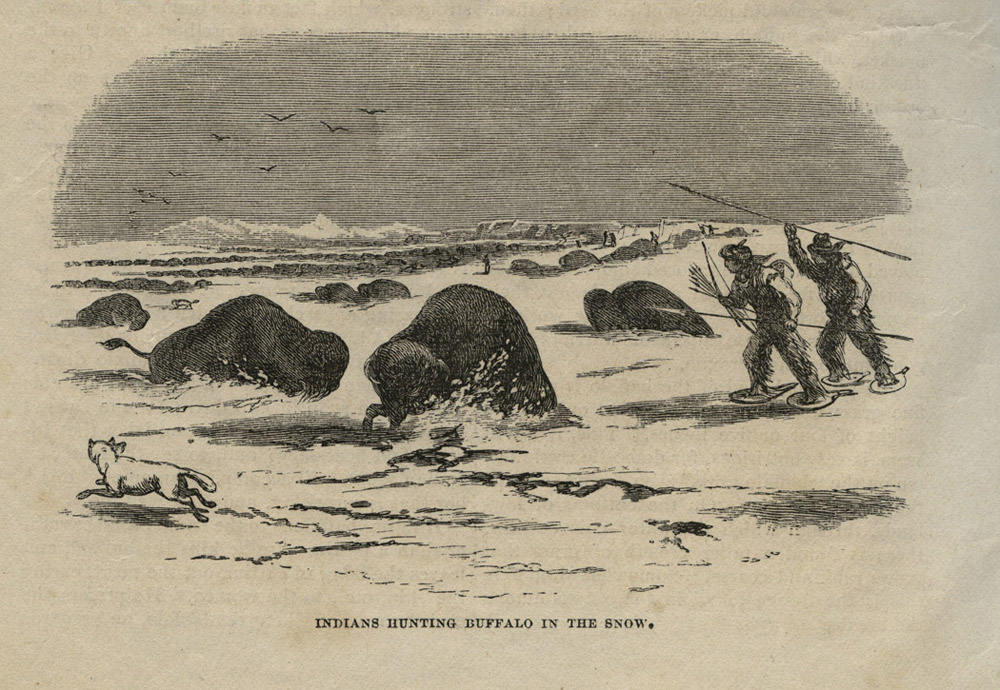 Image 2:  This illustration by Theodore Davis for the popular magazine Harper’s shows Indian hunters taking advantage of snow to hunt bison. The bison wallowed in deep snow which prevented them from running. The Indians used snow shoes to walk on top of the snow. Snow and cold were dangerous to humans, but with the proper equipment, the snow gave the hunters an advantage. SHSND Harpers Monthly January 1869 p0158 Indians Hunting Buffalo in the Snow.

Cool temperatures meant that plants would not be as abundant or as productive. Cooler temperatures forced people to move south to more comfortable climates until the climate warmed again.

Wet and dry cycles are very characteristic of the Great Plains. Averages of rainfall tend to be modified by words like “droughty” meaning that the rainfall was close to average but on the dry side. Scientists have determined that from 1406 to 1752 there were 172 dry years. The dry years amount to about one-half of that 350 year period. How severe those droughts were depended on the length of time the drought lasted. If every other year was dry, people could manage to compensate for drought. However, each dry spell lasted for an average of 12 years. A drought of that length can force people to make changes in the way they live or where they live.

Some years were exceptionally wet or dry. The years 1836 to 1851 tended toward drought, but 1849 was one of the wettest years ever in eastern North Dakota. Very severe droughts occurred in the late 1750s, the early 1820s, and the early 1860s. Droughts not only caused food shortages, they also set the stage for extensive and destructive prairie fires. (See Document 1.)

There is an old saying, “Everyone talks about the weather, but no one does anything about it.”  Fortunately, early explorers and traders complained about the weather as much as we do today. The journals, letters, and reports they wrote provide data on the cycles of North Dakota weather. The attitudes of the explorers fostered a sense that North Dakota was a distant, cold, very dry place, and not very attractive to American farmers.

Explorers and fur traders were usually literate, well-educated men who kept excellent records of their travels and their business proceedings. Many of their journals and reports were published and read by railroad executives, military leaders, and ordinary citizens. Their comments on the weather of the northern Great Plains were important sources of information that tended to delay settlement in this region.

“The drought has been so great this season that there is scarcely any water to be found in this  little [Plum] River.”  Alexander Henry, North West Company fur trader. Summer, 1800.

“[The] Shayenne River [is] much swollen . . . The Shayenne is a rapid turbid stream, and was at that time deep. . . . “[We traveled] over a level prairie on which the water stood from two inches to two feet deep almost the entire way. . . we reached the Maple river which Mr. Kittson had bridged; but the water being much higher now than when he crossed it, the bridge had disappeared . . . There had been such torrents of rain about this time, that the little branches that ordinarily furnish barely a sufficiency of water . . . were now swimming . . . We arrived at Pembina and found the Red river and Pembina river with about twenty feet rise in them and overflowing their banks.” Major Samuel Wood, leader, military expedition to locate forts. July, 1849.

“I am utterly at a loss, to account for such violent winds on this part of the plains, and this may account for the few Bison we have seen, and the smallness of the herds, which rarely exceed twenty.” David Thompson, explorer and mapmaker, North West Company, 1797.

“We suffered much from cold. The thermometer, which had stood at 83° the preceding day at noon in the shade, had sunk to 43° at sunrise. This variation was greater than any we had yet observed, but . . . the variation from sunrise to noon averaged 30°. The transition from great heat during the day to very cold night was extremely unpleasant.”  William Keating, geologist with Major Stephen Long expedition on the Red River. August 2, 1823.

“[This was] a fearful snow-storm, such as not been witnessed for years. This storm, which lasted several days, drove the buffalo beyond the hunters reach, and killed most of their horses. . . no one was prepared for the inevitable famine that followed . . .hunters . . . were so scattered that they could render each other no assistance, nor could they so much discover each others whereabouts. . . Thirty-three lives were lost.”  Alexander Ross, fur trader and employee of the North West Company. 1856.

“Early in November we had an extraordinary heavy fall of Snow. The remainder of the Season was open and mild . . .  [In] April . . . weather was excessive hot.  .  . In a few days after we experienced a most dreadful Snow Storm and which continued in great violence for the space of three days, at the end of which there was three feet of Snow upon the ground but it did not remain long.”  Alexander Henry, North West Fur Company trader. Winter, 1799-1800

Document 2: In this entry from a published version of Alexander Henry’s journal, he describes how an early fall snowstorm created discomfort and difficulty for his party. The Journal of Alexander Henry the Younger, 1799-1814, Vol. I

Early travelers to North Dakota wrote about weather cycles. (See Document 2.) Sometimes, the visitors did not recognize the climate as part of a cycle; they believed their experience with the weather was typical of North Dakota’s average climate. Perhaps the most famous of the visitors to be misled by the climate was Major Stephen Long. Long led an expedition to the Red River in 1823. He thought the drought was typical and that because of long-standing drought, the soil was sterile, salty, and unproductive. Long had also led expeditions across the central plains in 1820 (another drought year). His report on the expedition led Americans to believe that the Great Plains would never support agriculture. The Plains became known as the Great American Desert.

Wind also impressed explorers and traders. Explorer David Thompson went to work for the Northwest Company in 1797. He surveyed the land along the Souris River to create maps for his employer. The year he came into North Dakota was particularly windy. Thompson believed the winds were strong enough to cause bison herds change direction and move away from the wind.

Though hot, dry years cycled with cool, wet years, there were times when the temperature fluctuation over a 24-hour period amazed explorers. Geologist William Keating who was with Major Stephen Long in 1823, wrote in his journal that on August 2, 1823, he and his men “suffered much from cold.” On the previous day, the temperature had reached 83°. Overnight, a cold front dropped the temperature to 43°, catching the explorers by surprise.

Early explorers and traders had difficulty dealing with the extremes of North Dakota’s weather cycles. However, extremes are “normal” for this region. The irregularity of North Dakota’s climate pattern is a characteristic we can count on.

Why is this important?  Weather is a determining factor in many economic activities. Farmers must raise productive crops in spite of variations from year to year. If people do not have enough to eat, they must find another place to live. American Indians who lived in North Dakota for hundreds of years adapted their crops and their migrations to regional weather cycles. As European and American explorers, traders, and surveyors came into this region, however, they tended to see their own experience as “typical.”  Their reports often led people to believe that this region would never be settled by European Americans who were used to more moderate climates and reliable rainfall.