The first commercial radio station in the United States was KDKA, owned by Westinghouse Corporation and  located in Pittsburgh, Pennsylvania. KDKA began broadcasting on November 2, 1920, just in time for the presidential election. Though there were few radios in private homes at the time, the station received dozens of postcard and telephone calls the next day indicating that people were listening. The station had started the “radio craze” that swept the nation. Within a year, more than three million American homes had a radio.KDKA was the first commercial radio station to receive a broadcasting license and to go on air. But the first radio station in the world was on-air in Argentina more than a month before KDKA started broadcasting. The earliest stations did not have advertising. They were often owned by companies like Westinghouse that wanted to sell radios. Some newspapers owned radio stations to sell newspapers and to have an extra outlet for their editorial positions. 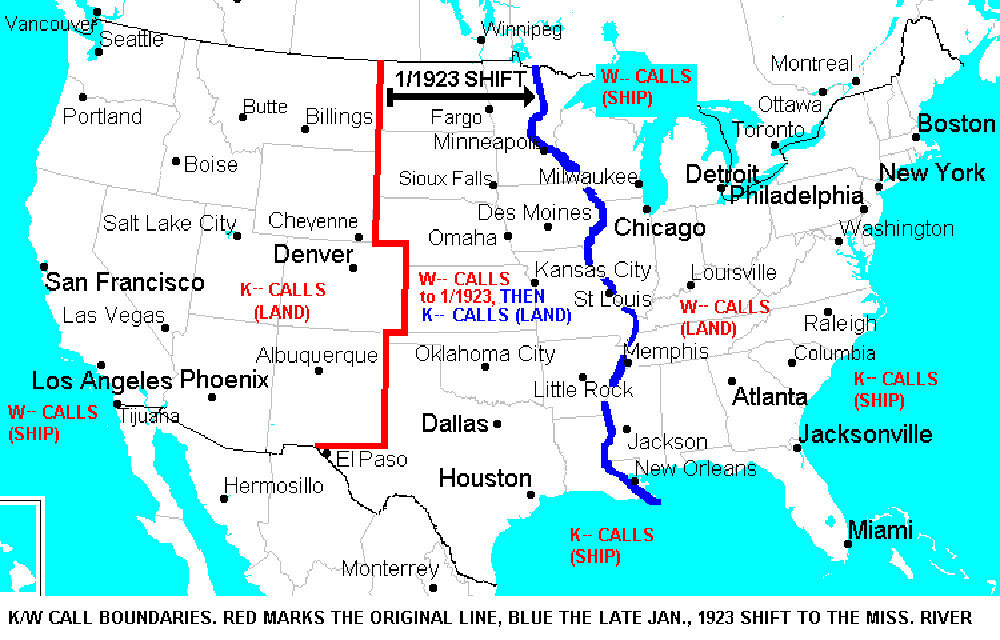 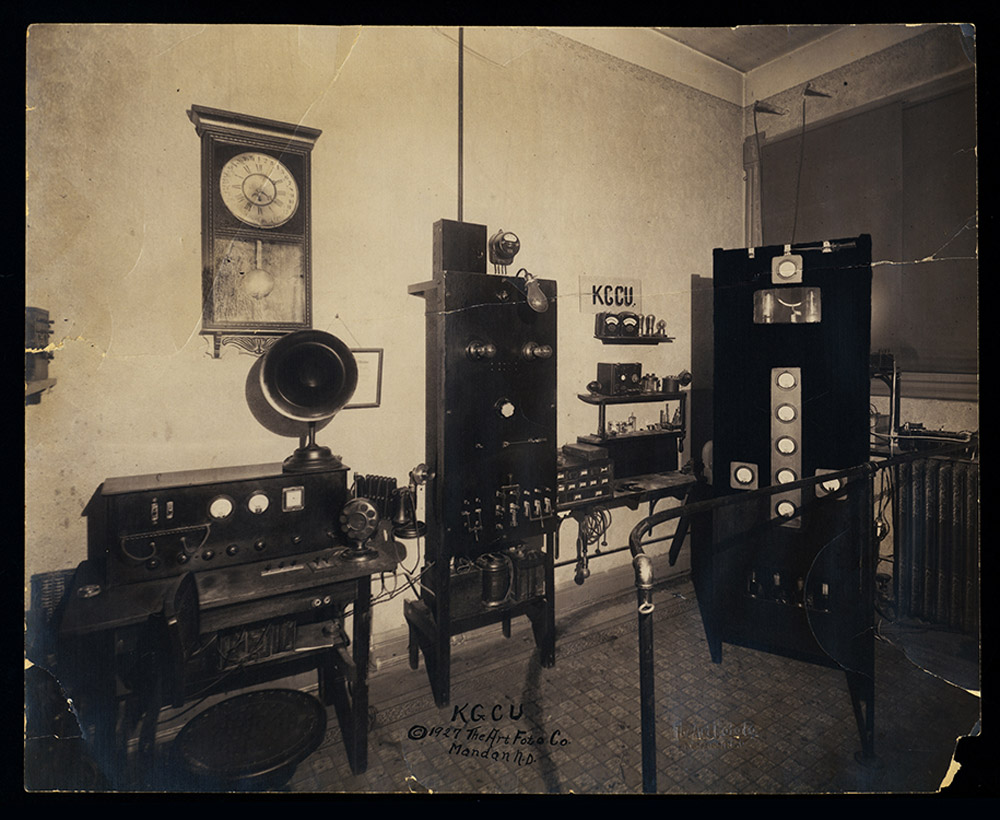 By 1922, there were about 30 radio stations in the United States, including WDAYThe federal government began licensing radio stations in 1912. Radio stations in western states were given call letters (such as KVOX) beginning with a K. Eastern states had call letters beginning with a W. The dividing line was originally aligned with the Texas-New Mexico border. This line matched up with the western boundary of North Dakota. However, in January, 1923, the boundary was moved eastward to line up with the Mississippi River. (See Map 1.) WDAY in Fargo had already been granted a license and call letters beginning with W. WDAY and a few other stations were “grandfathered in,” meaning that they could keep their station letters, but all North Dakota stations licensed after January, 1923 received call letters beginning with K. in Fargo. WDAY operated out of a tiny room in the tower of the Cass County Courthouse for the first few months. The station used a 50 watt transmitter to broadcast news, weather, markets, and music. (See Document 5) By 1930, WDAY had grown to 1,000 watts and was serving much of eastern North Dakota and western Minnesota. Five other stations were operating from Bismarck, Mandan, Devils Lake, Minot, and Grand Forks. (See Image 8.) Of course, few rural homes in North Dakota had electricity at the time. Some homes had a wind charger that gave them a few hours of electricity each day. However, many homes had a homemade crystal radio set. Inexpensive crystal sets received radio signals through a piece of lead crystal and a cat whisker. (See Image 9.) The shortcoming of the crystal set was that the sound was very weak. People usually listened through headphones, but there was a lot of static interference. Vacuum tube radios with much better sound became commercially available in 1924. (See Image 10.) 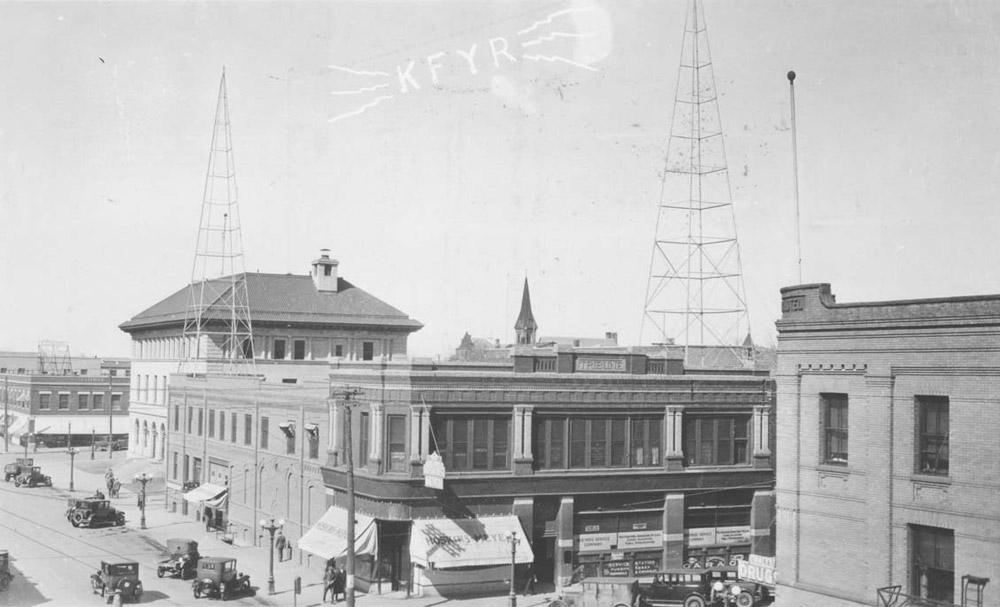 Image 9: In 1927, KFYR radio had two large transmission towers on top of a building at Fourth and Main streets in Bismarck. The large building to the left is the federal building. Businesses occupied storefronts on the main street level. SHSND A5425.

In the 1930s, a great variety of entertainment became available on radio stations. People enjoyed local talent programs, comedies, and sports including boxing and baseball. (See Image 11.) In the 1930s, radio stations began to broadcast scripted dramas. The first of these was “The Smith Family” heard only in the Chicago area. In 1937, “The Guiding Light” debuted on NBC network and could be heard all over the country. Because daytime dramas were so often sponsored by companies that made soap and other cleaning products, they came to be known as “soap operas.” 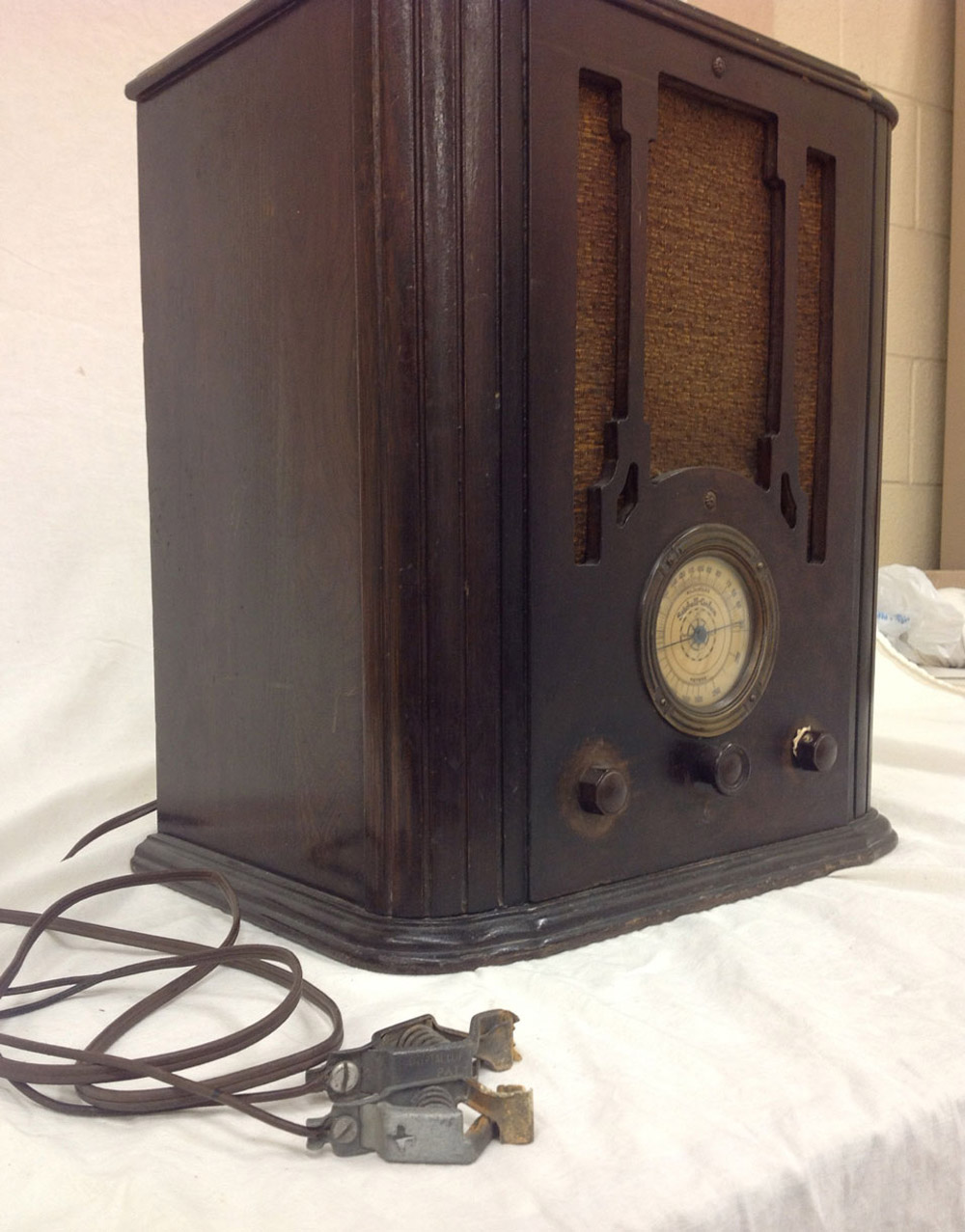 Image 10: This Setchell Carlson radio was made in the 1930s and used in a North Dakota home. The wooden box with fabric covered speakers in the front was a typical style for home radios. The listener turned a knob to set the dial to a radio signal. Another knob controlled the volume. This radio was not hooked to a wall electrical outlet, but to a battery. North Dakota farm homes did not have electricity until the 1940s and 1950s, so they used batteries to power radios. SHSND Museum 14920. 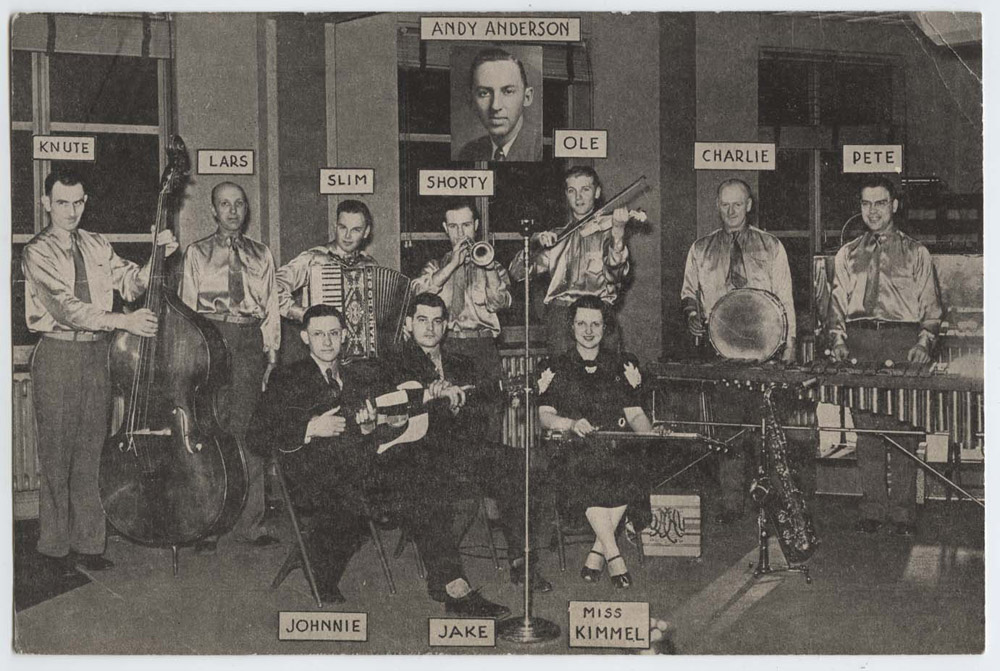 Image 11: Radio stations filled most of their broadcast hours with local programming of music, news, sports, weather, and agricultural markets. The stations often sent out direct mail advertising such as this postcard to let listeners, and potential listeners, know what to look for on “your radio dial.” The Fairmont Old Timers performed every Monday night on WDAY radio and in concerts throughout the region. Radio listeners enjoyed seeing the faces of the people they listened to on the radio. SHSND 2012-P-007. 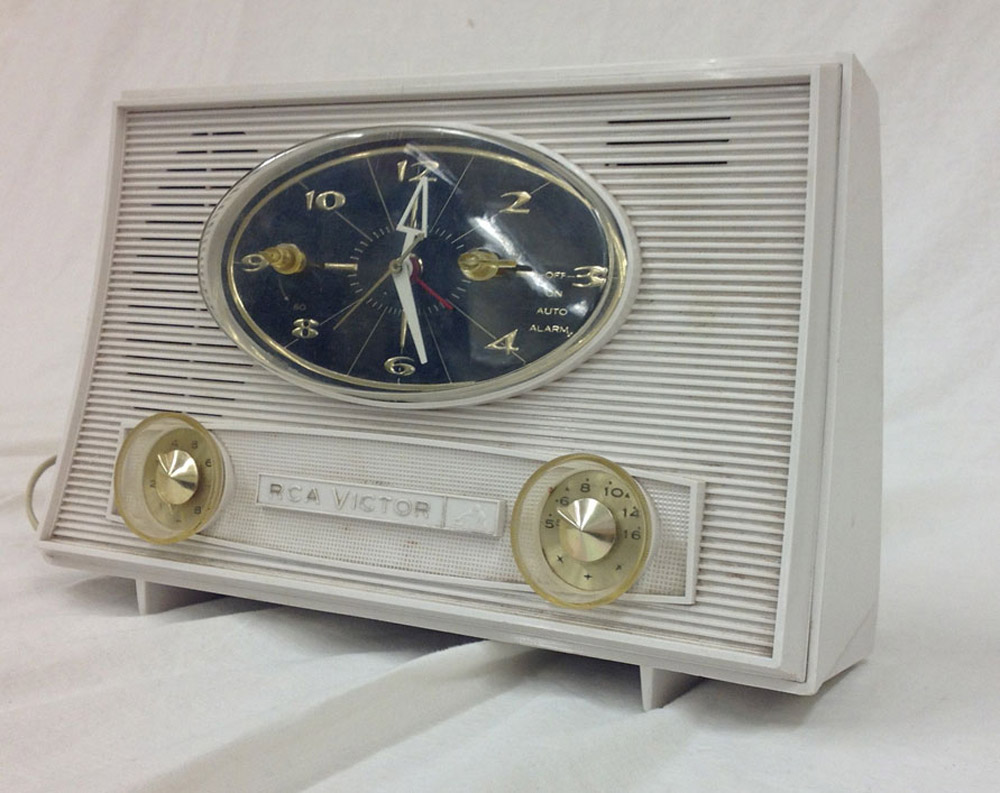 Image 12: Clock radios began to appear in homes in the 1950s. They were an innovative way to use radio in the home. The clock showed the time, but also could be used to turn on the radio at a particular time. Many people used clock radios to wake up in the morning. SHSND Museum 2007.13.154 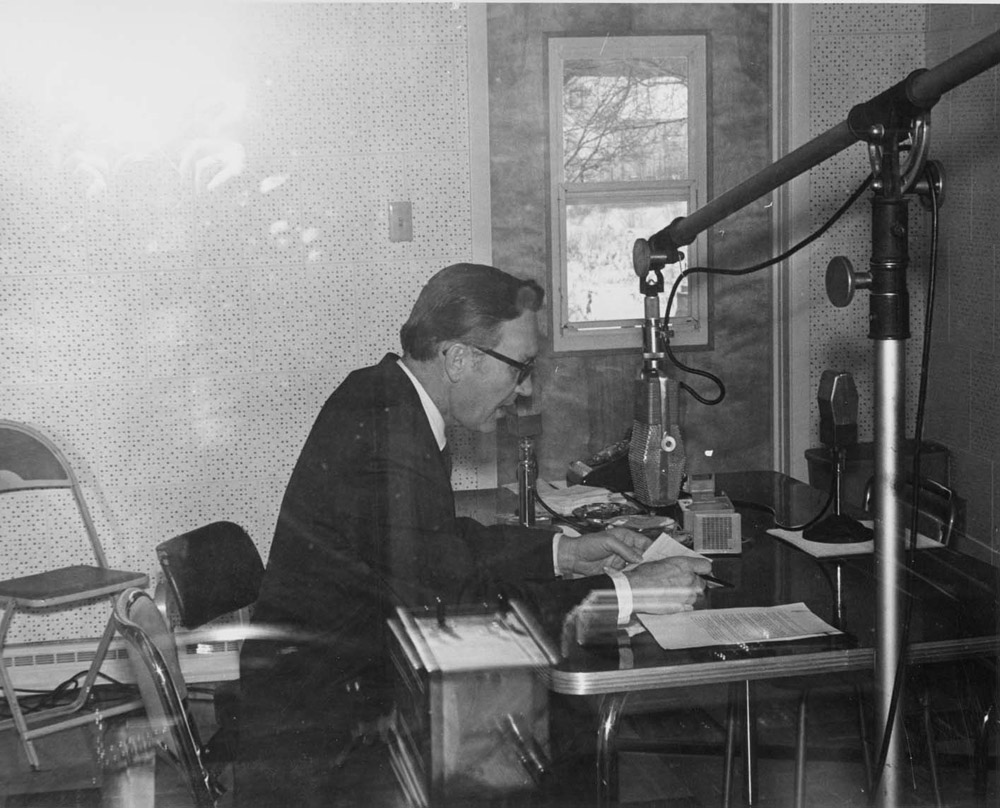 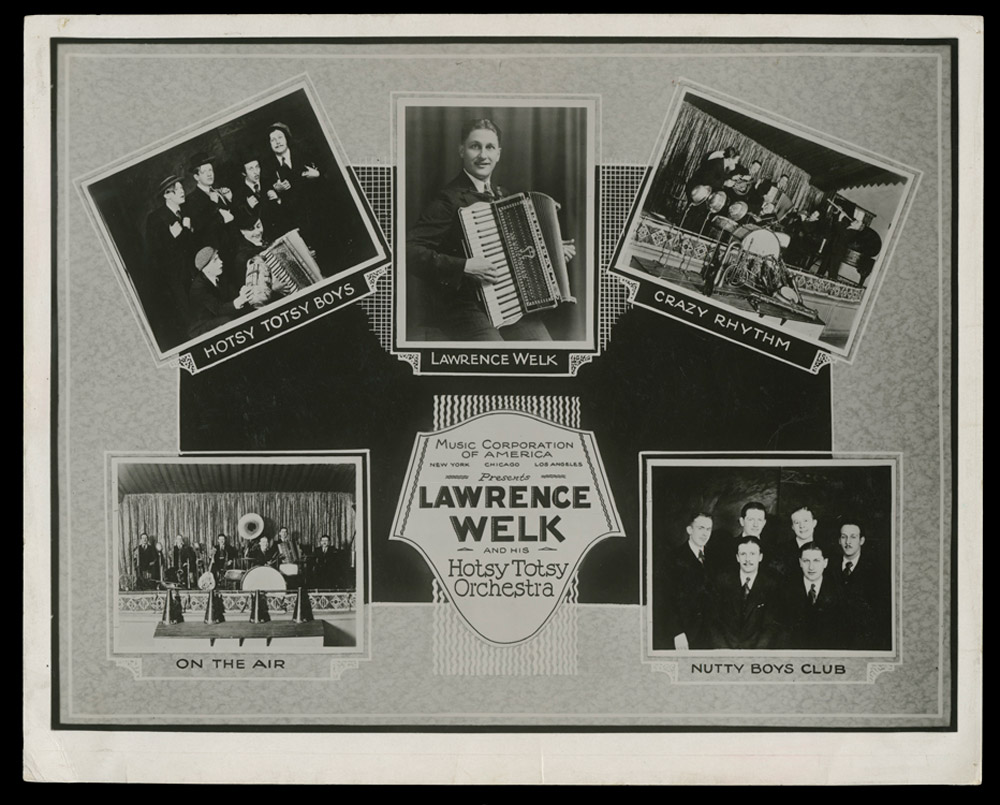 Image 14: Lawrence Welk left his farm home near Strasburg, North Dakota in 1924 to make his living in music. He led several bands that performed in the region. His band, the Hotsy Totsy Band, became the house band for radio station WNAX in Yankton, South Dakota in 1927. After several years, Welk began to expand his touring into a larger region. In 1951, he starred in a musical variety show on Los Angeles television. By the late 1950s, he was one of the biggest television stars in the country. This postcard was used to advertise his show on WNAX. SHSND C3602 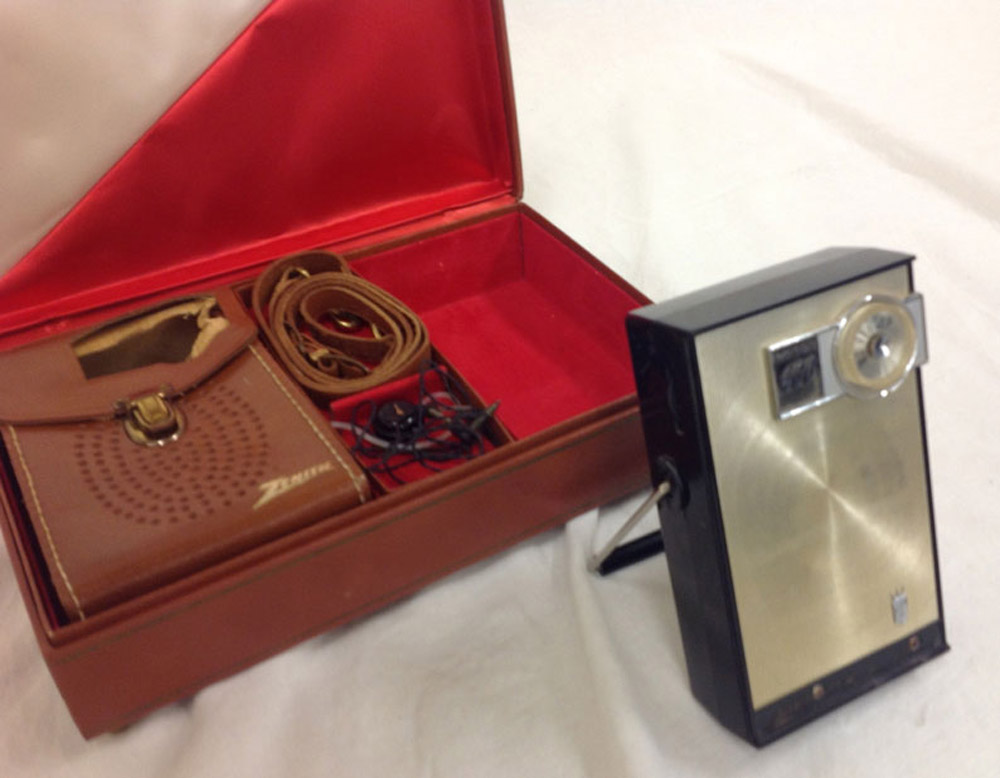 Image 15: Transistor radios became available in 1954. They appealed particularly to teenagers because they were small and operated with ordinary batteries that lasted a long time and did not need to be plugged into electrical outlets. Teenagers had the freedom to carry their radios-and their own choice in music-wherever they went. SHSND 1990.262.

Listeners took their radio programs to heart. Many North Dakotans found comfort and companionship in radio personalities they listened to everyday. Long winter days were easier with music and dramas. (See Image 12.) Some North Dakotans followed baseball teams in distant cities and became national baseball fans. Politicians quickly grasped the importance of reaching a radio audience. (See Image 13.) Though North Dakota’s small population generally did not earn a visit from the president of the United States, everyone could listen to major political speeches on radio.

Radio stations featured local musical acts every day. Some musical acts, such as WDAY’s Barn Dance, traveled the state and produced their broadcasts from location. A couple of young North Dakotans, Lawrence Welk and Peggy Lee, made the transition from local radio to stardom.

Lawrence Welk grew up in Strasburg and decided as a young man to be a musician. His father bought him an accordion after Welk promised to work on the farm until he was 21. Before long, he was leading bands in North Dakota and South Dakota. In 1927 after graduating from music school in Minneapolis, he and some friends decided to head to New Orleans. They got as far as Yankton, South Dakota where the tired, broke, and snowed-in young musicians became the house band for WNAX radio. For several years, Welk’s band traveled the region and played on radio. (See Image 14.) In the1950s, Lawrence Welk took his famous “champagne music” from radio to network television. His program was so popular that it still airs in re-runs.

A young woman also started her journey to fame on North Dakota radio. Norma Egstrom grew up at Wimbledon where her father was the railroad station agent. Her mother died when Norma was four and her father soon remarried. Norma’s stepmother beat her often and made her responsible for all the housework and farmyard work. Music offered Norma a way out of this terrible homelife. By the time she was 14, Norma was singing at local churches and on radio KOVC in Valley City. When she was 16, Norma went to Fargo where she began singing on the WDAY “Noonday Variety Show” and with the “WDAY Barn Dance.” WDAY paid her $1.50 per day and changed her name to Peggy Lee. She saved her money, and in 1937, at the age of 17, she moved to Los Angeles where her career took off. Lee sang with popular big bands, recorded many hit songs, and starred in movies. Her jazz recordings impressed some of the greatest musicians of her time including Benny Goodman and Duke Ellington. (See Image 15.) 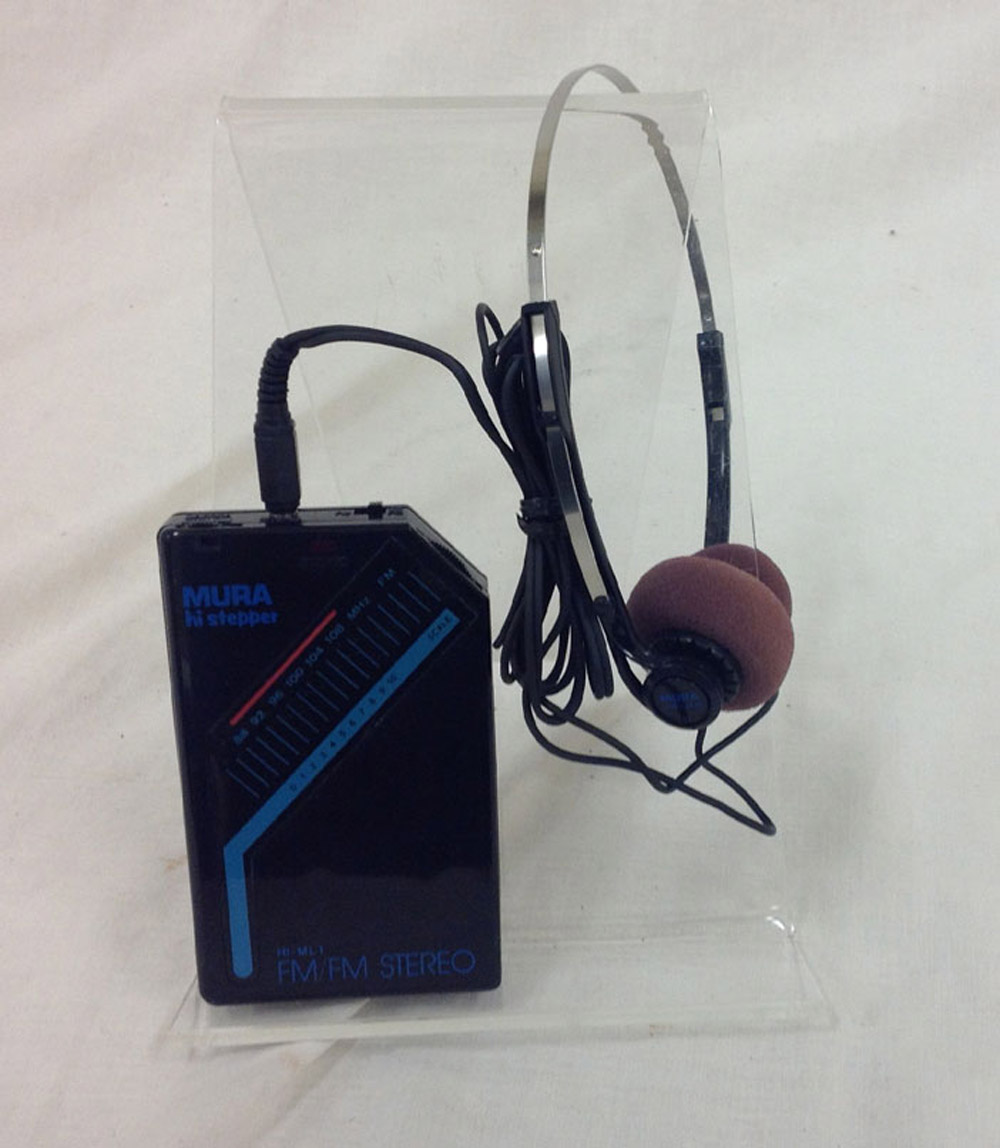 Image 16: By the 1980s, radios had become even smaller than transistor radios. The personal radio, often called Walkman after one brand, allowed people to listen to radio through headphones wherever they went. They could listen while working or talking to friends. SHSND Museum 2002.58.7.

Document 5. WDAY Radio: This silent film was made to show radio viewers how radio program were made and how the technology worked. The film was probably made before 1927 when “talkies,” or movies with sound were available. Very likely, this 11 minute film was shown in local silent movie theatres. SHSND WDAY Radio Early film.

Radio was the stepping stone to fame for talented North Dakotans, but for most people, radio was the window to a world of news, sports, and entertainment that they could not have imagined a decade earlier. (See Image 16.)

Why is this important? Radio brought a new view of the national perspective to North Dakota. Though North Dakotans read national news reports in newspapers and listened to records, radio brought the world to their living rooms. North Dakotans could hear news reports as events happened. People who did not speak English could improve their language skills while listening to the careful diction of radio announcers. Radio also helped connect North Dakotans to events in other towns in their region.