At the North Dakota constitutional convention in 1889, delegates chose the Great Seal and the Motto of North Dakota. While many of our other state symbols were selected later, it was important to have the Great Seal ready to use as soon as the new state produced documents. 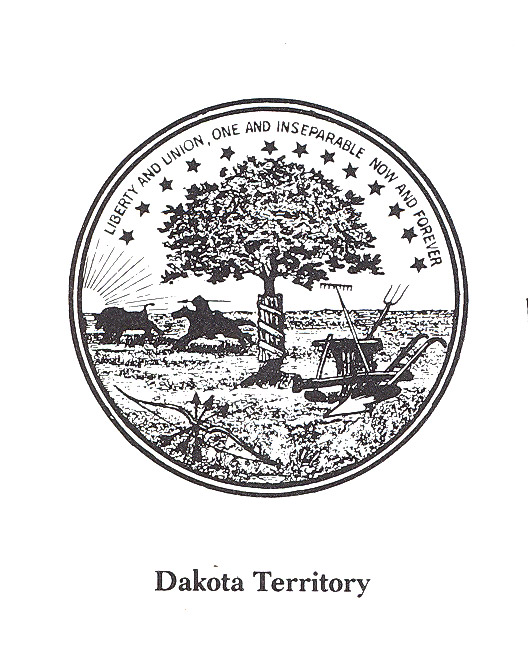 Document 9: Territorial Seal. Dakota Territory used an official seal to mark territorial documents. Its design was prescribed by law. When the territory split into two states, North Dakota kept this basic image, made some adjustments to it to make it the seal of the State of North Dakota.

When North Dakota and South Dakota split, it was necessary to make decisions about how to split the records and property that had accumulated during the territorial period. North Dakota took the images on the territorial seal and the motto. The motto of Dakota Territory was chosen in 1863 from a speech made by Senator Daniel Webster 1830. Senator Webster concluded his speech with a phrase that became famous:  “Liberty and Union, now and forever, one and inseparable.”   The phrase had particular importance in 1863 because the Union had been divided by the Civil War.

In 1890, two other mottoes were suggested. Mr. Johnson suggested not using Webster’s words, but use instead words from Abraham Lincoln’s Gettysburg address:  “Government of the people, for the people, and by the people shall not perish from the earth.”    Mr. Martin Johnson (Republican of Lakota in Nelson County) suggested the change because Webster’s concerns over states’ rights had been settled by the Civil War and the question was “as dead as a smelt.”  Mr. Andrew Blewett (Democrat of Jamestown) suggested using as the motto: “Public office is a public trust.”  Both options failed; Mr. Webster’s words remained on the Great Seal. 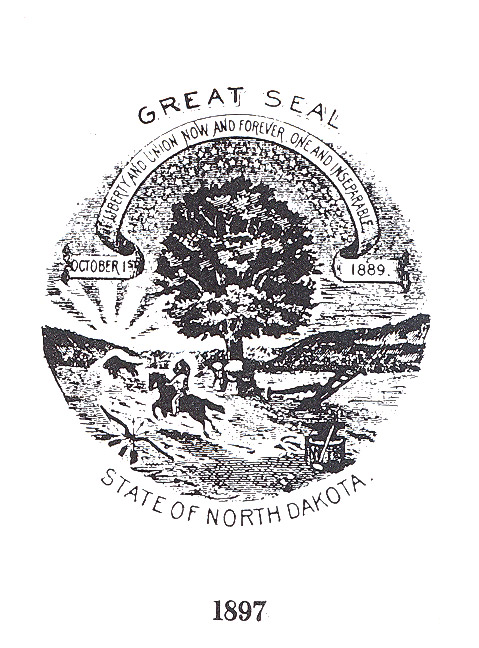 Document 10: Early ND state seal. The state seal of North Dakota used many of the elements of the territorial seal, but revised the quotation from Daniel Webster to be more accurate. The image has been described by laws governing its proper use.

The design of North Dakota’s Great Seal, too, is very similar to the territorial seal. The State of South Dakota created a new seal (in 1885, four years before statehood) with a river, a farmer plowing, and a smelter. (See Document 10) Over the years, the Great Seal of North Dakota has changed a little, but it continues to have the same elements as required by the North Dakota constitution:

A tree in the open field, the trunk of which is surrounded by three bundles of wheat; on the right a plow, anvil and sledge; on the left a bow crossed with three arrows, and an Indian on horseback pursuing a buffalo toward the setting sun; the foliage of the tree arched by a half circle of  fort-two stars, surrounded by the motto “Liberty and Union now and forever, one and inseparable;” the words “Great Seal” at the top, the words “State of North Dakota” at the bottom; “October 1st” on the left and “1889” on the right. The seal to be two and on-half inches in diameter.

North Dakota did not have an official flag until 1911. Colonel John Fraine, a member of the legislature, recommended that the North Dakota flag “conform in all aspects” to the flag carried by the North Dakota National Guard First Infantry in the Spanish-American War (1898).

Why is this important? Symbols help unify the people who live in a state. They create an identity for people who call themselves North Dakotans. The symbols included in the seal are both historical and contemporary. The plow stands for farming which was the most important economic activity in North Dakota for a long time. The bow and arrows and the Indian on horseback acknowledge the people who lived on the northern Great Plains long before homesteaders and the railroad came to the state. The tree is an ancient symbol for life and the continuity of generations. The sheaves of wheat stand for prosperity. The territorial seal had 13 stars representing the original 13 colonies that became the United States in 1776. North Dakota is listed as the 39th state, but the modern seal has 42 stars in it. Because the Omnibus Bill admitted four states to the Union, there were 42 states in the United States by mid-November, 1889.