Territorial governors had to be prepared to deal with every aspect of government because important institutions such as county and district courts had not been organized yet. There were few social institutions such as schools and churches to encourage orderly conduct in the territorial cities or the countryside. The counties and cities were growing in population during the 1870s and 1880s, and the government had to grow quickly as well. Some of the people who were attracted to this rapidly-growing territory such as Bismarck saloon owner Jack White were known outlaws. Others were interested in personal political advantages. Most people were interested in building a good life for themselves and their families. 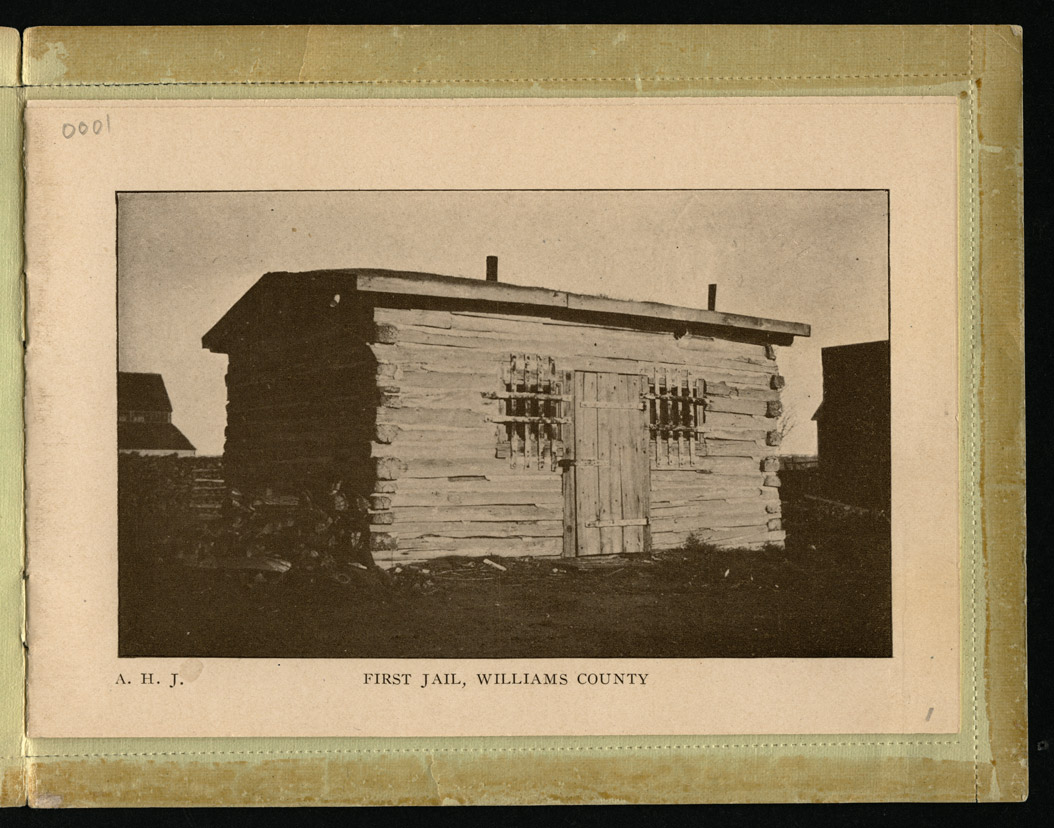 Image 1: Criminals in Williams County in the 1890s were incarcerated in this crude jail. Though the jail appears to be strong enough to hold most prisoners, it would have been very hot in summer and very cold in winter. SHSND A5394.

Creating local governments was not easy. The legislative assembly had to map the counties. The assembly also had to arrange for a tax collector to raise the funds to pay a sheriff and to build a jail. (See Image 1) The legislative assembly had to pass tax laws for the tax collector to use. The sheriff had to respond to criminal laws passed by the legislature. (See Image 2) Counties could not be created unless there was a population of sufficient size to support county government. In 1875, much of the territory remained unorganized at the county level. 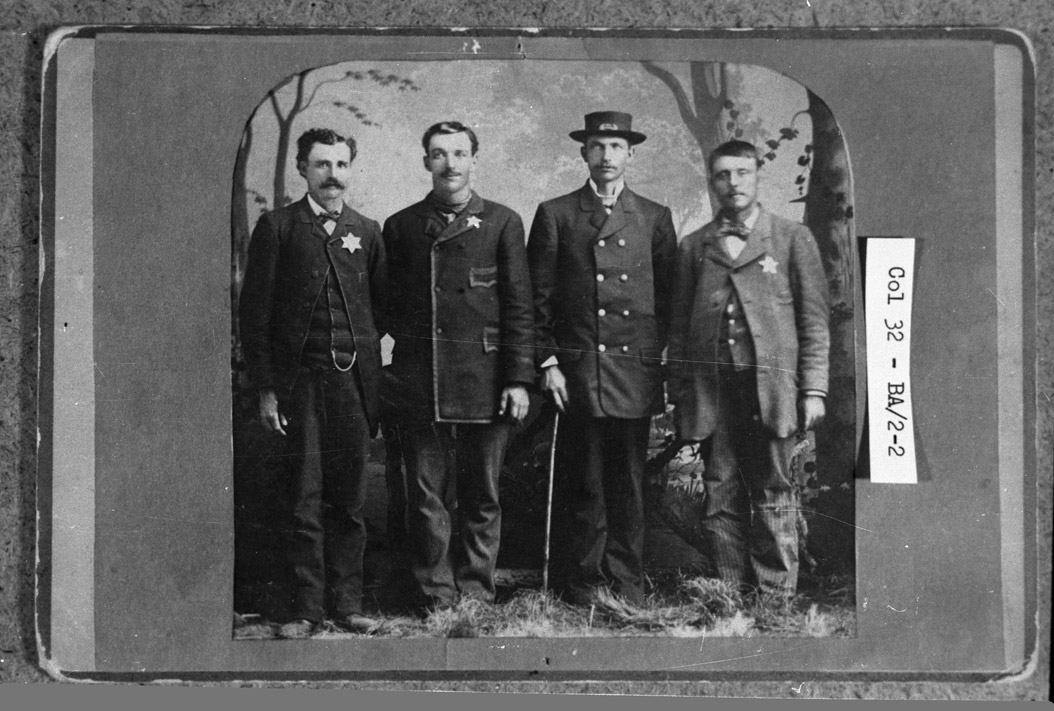 Image 2: Sheriff John Simons of Barnes County poses with his three deputies. The deputies wore badges that identified them as lawmen, but they did not wear uniforms. Simons did not wear a badge. Sheriff Simons served after North Dakota became a state. SHSND 0032-BA-02-02. 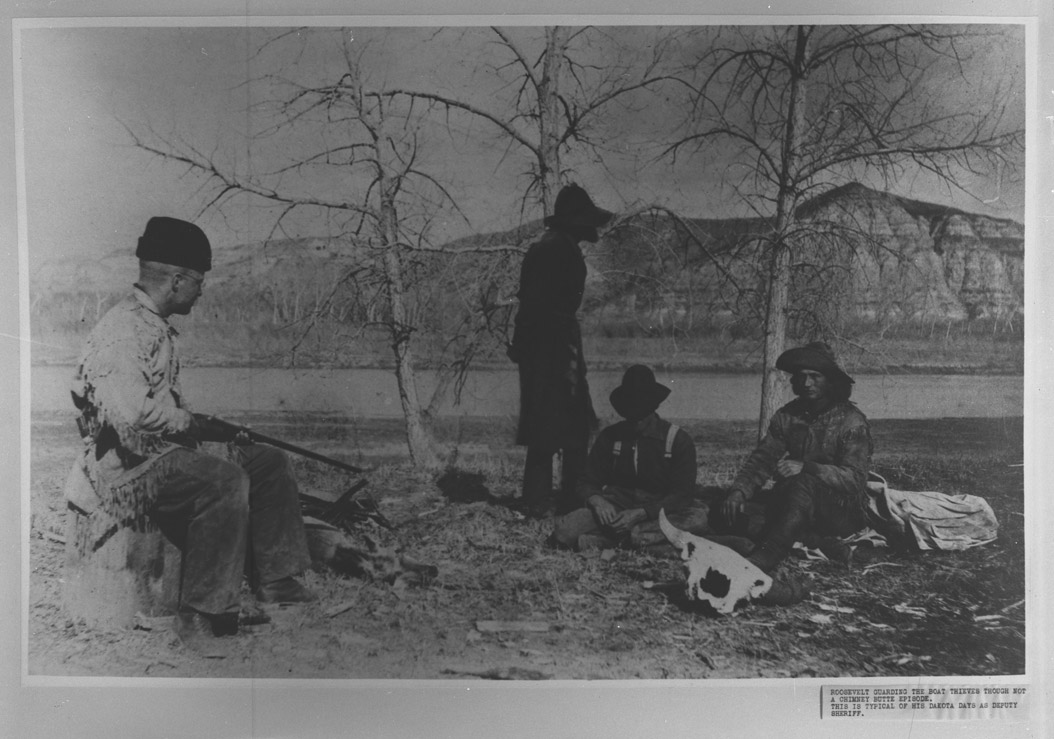 Image 3: Even a wealthy eastern rancher had trouble with crime. In 1886, Theodore Roosevelt chased three men who had stolen the boat he had tied up on the banks of the Little Missouri River near his Elkhorn Ranch. He tracked down the thieves and marched them all the way to Dickinson where he could turn them over to the sheriff. The sheriff paid Roosevelt a fee for rounding up criminals as required by law. SHSND A5056.

Many legal problems cropped up in the territory. (See Image 3) Criminal cases demanded immediate attention. People had to be safe in their homes and on the streets of their villages. The case of Lewis Gibbs demonstrates why county organization was important. (See Document 1) Mr. Gibbs wrote to Governor Burbank (1869 – 1873) asking for protection from an unfriendly neighbor. (See Image 4) There was no sheriff to help him fend off the neighbor’s assaults. Gibbs lived about 100 miles north of Yankton in an area that eventually became Moody County in South Dakota. 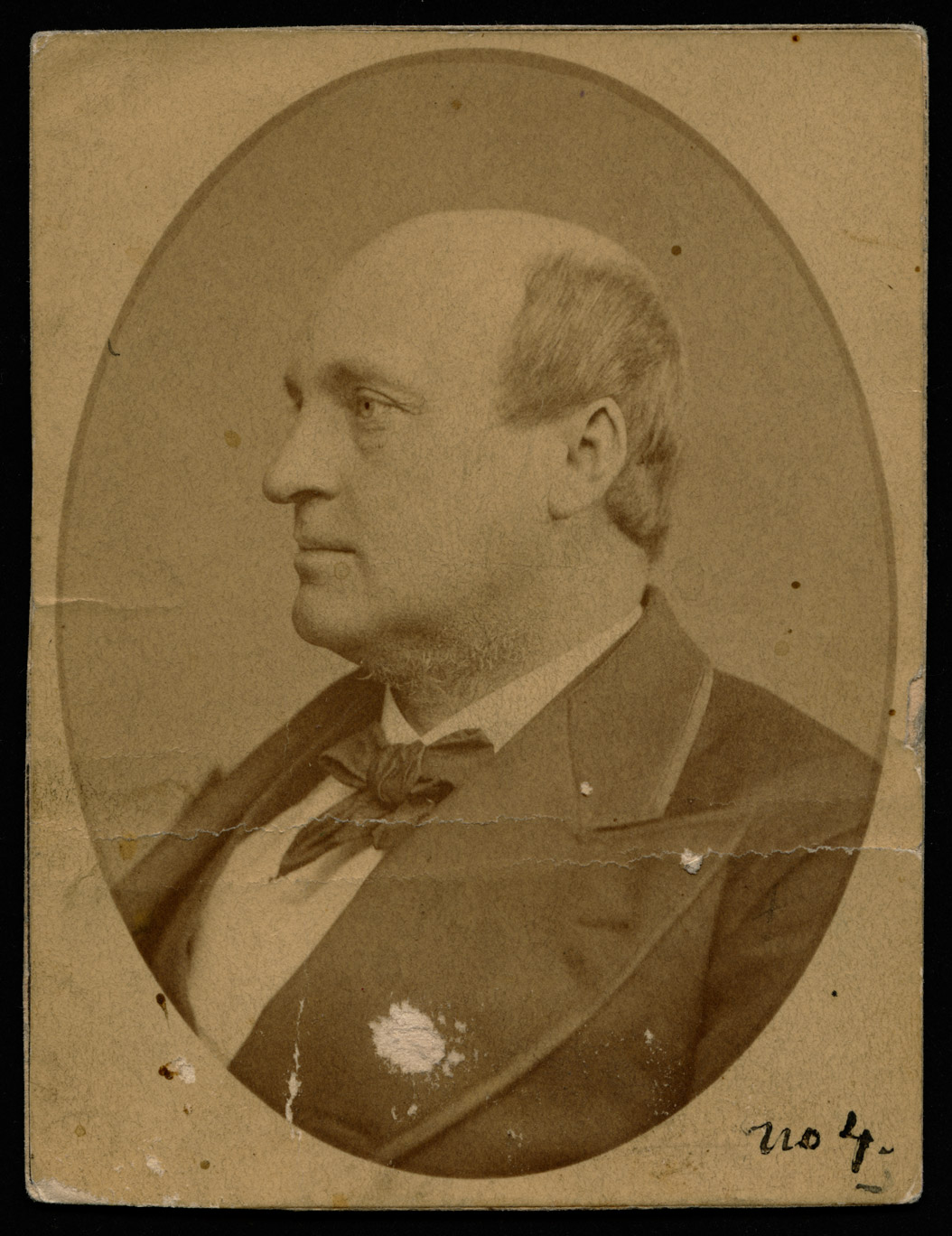 Image 4:Governor Burbank approved the organization of Moody County shortly after receiving a letter from Lewis Gibbs. Gibbs asked Burbank for county organization so that the county could hire a sheriff. Gibbs hoped that a sheriff would arrest the man who had been shooting at Gibbs. SHSND A1592.

It was clear to Gibbs that leading an orderly life was important not only to his health, but also to his success in Dakota Territory. Gibbs’ letter arrived in the governor’s office when people were asking permission to organize Moody County and form a government. We don’t know how much influence Mr. Gibbs’ letter had on Governor Burbank’s decision, but on August 11, 1873, the governor appointed two men to begin the process of organizing Moody County. Once organized, the citizens of Moody County would elect a sheriff to maintain order.

The case of James Black was a different criminal case. (See Document 2) He had committed a crime, though he claims to have been a “victim of excitement” – something that apparently happened often in frontier towns like Bismarck. The problem of finding prison space for someone like James Black had come to the attention of Governor Burbank more than a year before Black was convicted. Dakota Territory had not yet built a prison.

The Illinois State Prison had asked for Dakota Territory’s “business” in housing prisoners. Governor Burbank had declined the offer because, as he stated in April 1873, “at this time we are so fortunate as not to have any convicts under our Territorial Laws.”  Of course, that does not mean that there was no crime. With few sheriffs and judges in the territory, outlaws had an advantage. Business for the prisons would pick up when more counties were organized. 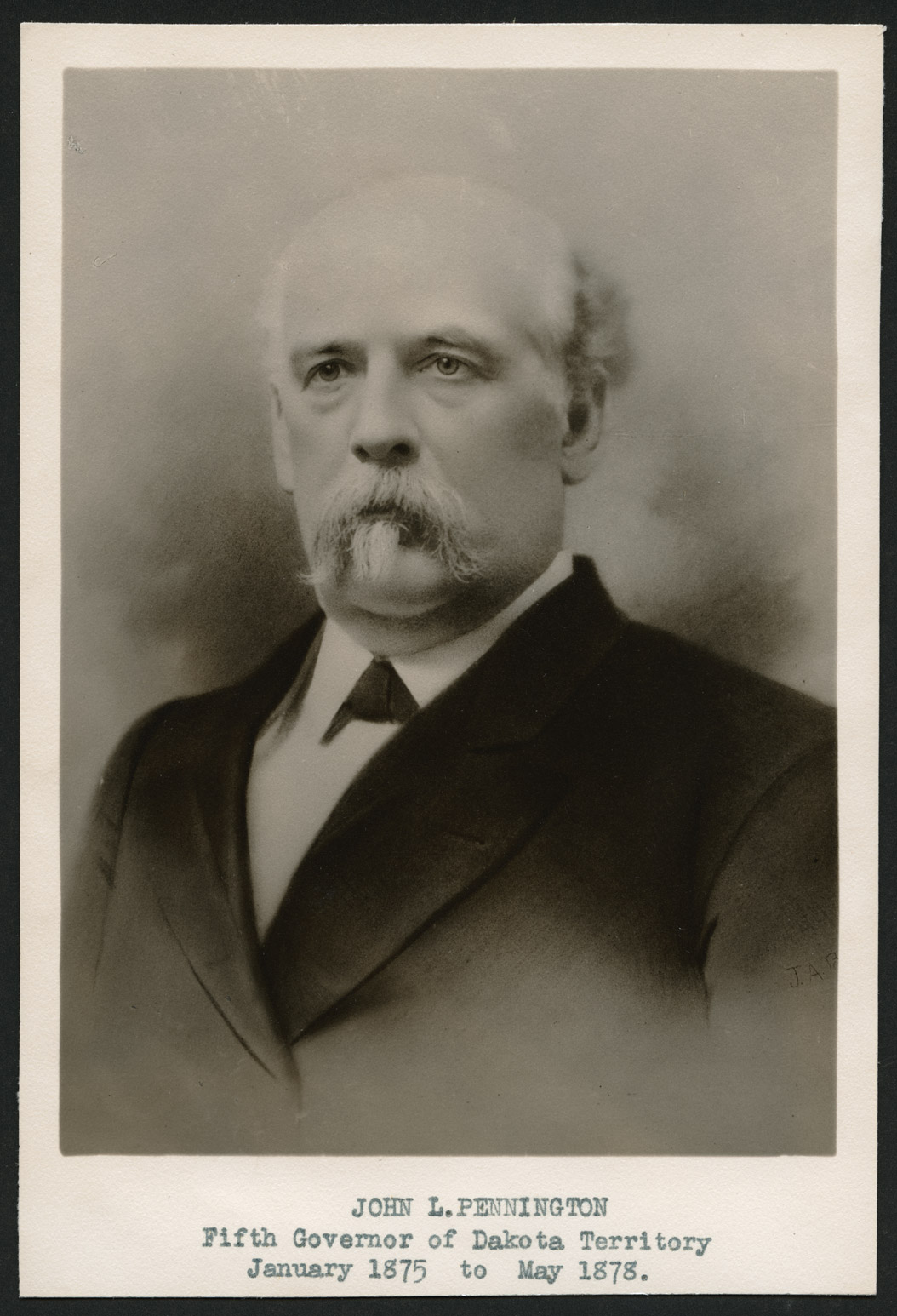 Image 5: Governor Pennington granted a pardon to young James Black. Black had been convicted of assault following a bar fight in Bismarck. His letter indicates that he has been reformed in prison. He promises to never commit a crime again. SHSND A2736.

Why is this important?  If Dakota remained lawless, few families would have wanted to locate in the territory. Few businesses would have risked an investment in Dakota. The territory had to acquire a substantial population (60,000 people) before it could become a state. Creating an orderly society was an important part of Dakota’s growth. 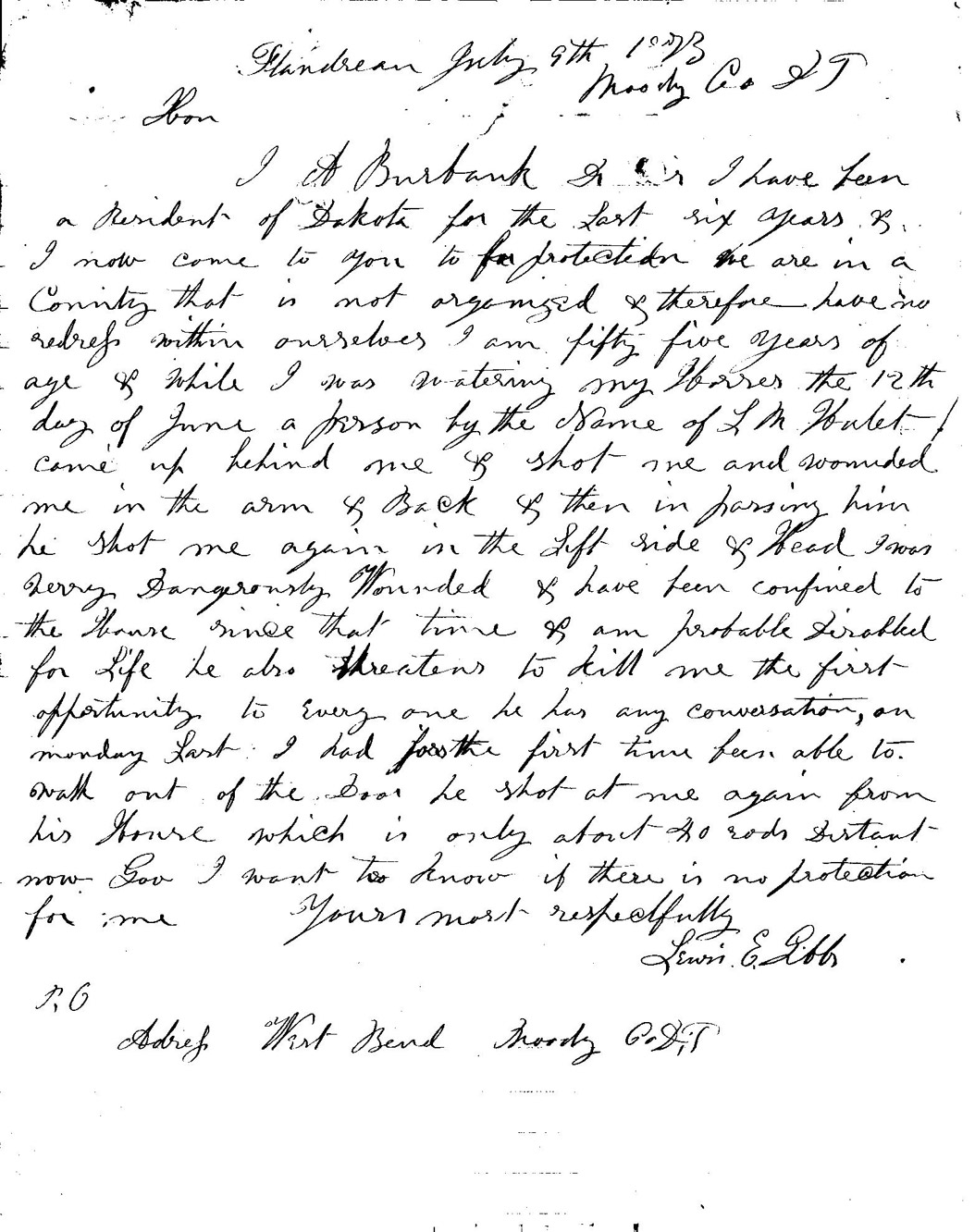 Lewis Gibbs Letter: Lewis Gibbs wrote to territorial Governor Burbank to request the formation of a county government. He wanted to have his irritable neighbor arrested to make his neighborhood safer. SHSND Series 76 Box 1 File 18.

J. A. Burbank  Dr  Sir I have been a resident of Dakota for the last six years and I now come to you to [ask] for protection  we are in a county that is not organized and therefore have no redress within ourselves   I am fifty five years of age and while I was watering my horses the 12th day of June a person by the Name of L M Hulet came up behind me & shot me and wounded me in the arm  & back and then in passing him he shot me again in the left side & Head   I was very dangerously Wounded and have been confined to the House since that time and am probably disabled for Life   he also threatens to kill me the first opportunity to every one he has any conversation, on monday Last I had for the first time been able to walk out of the door he shot at me again from his House which is only about 40 rods distant now   Gov I want to know if there is no protection for me 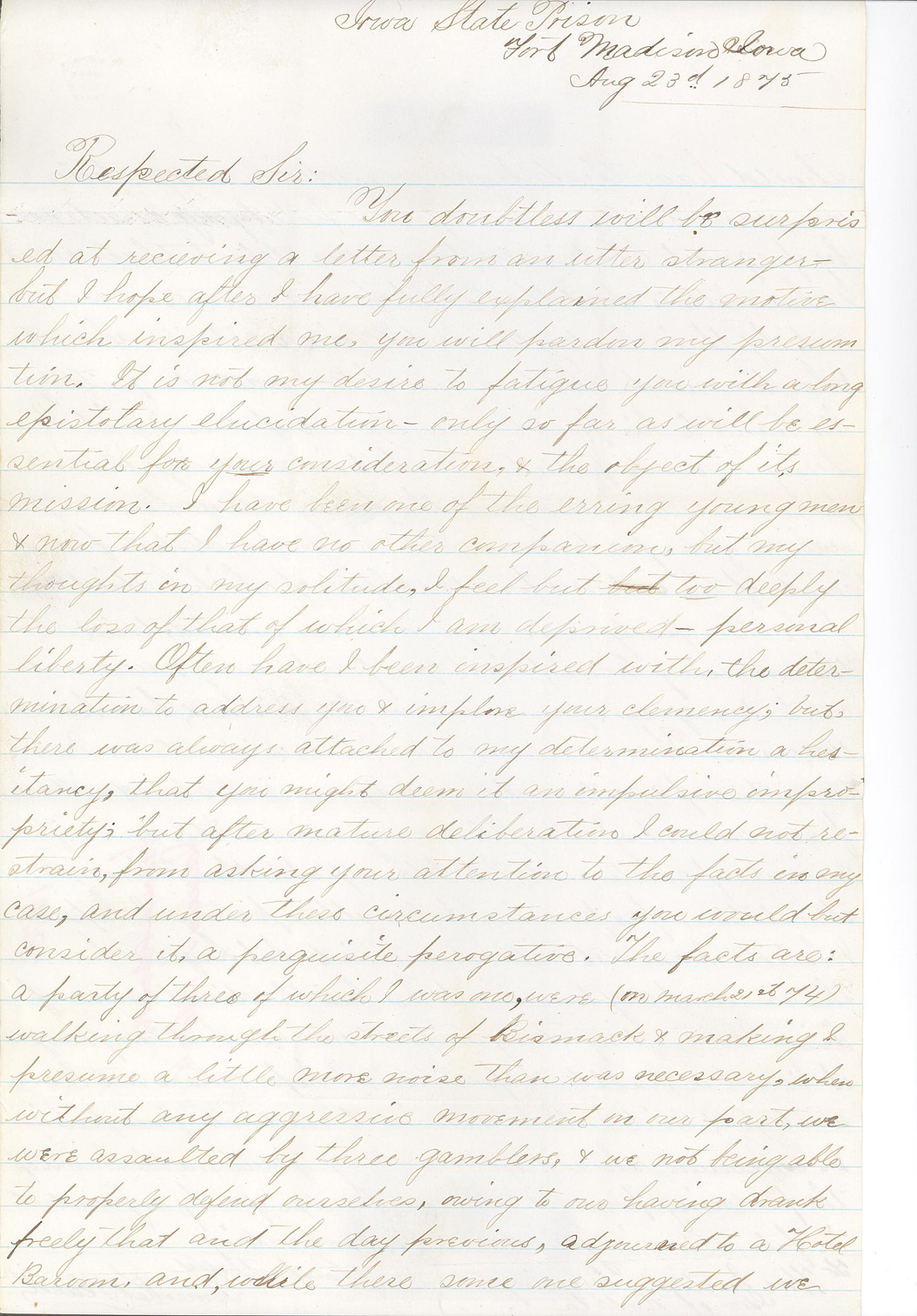 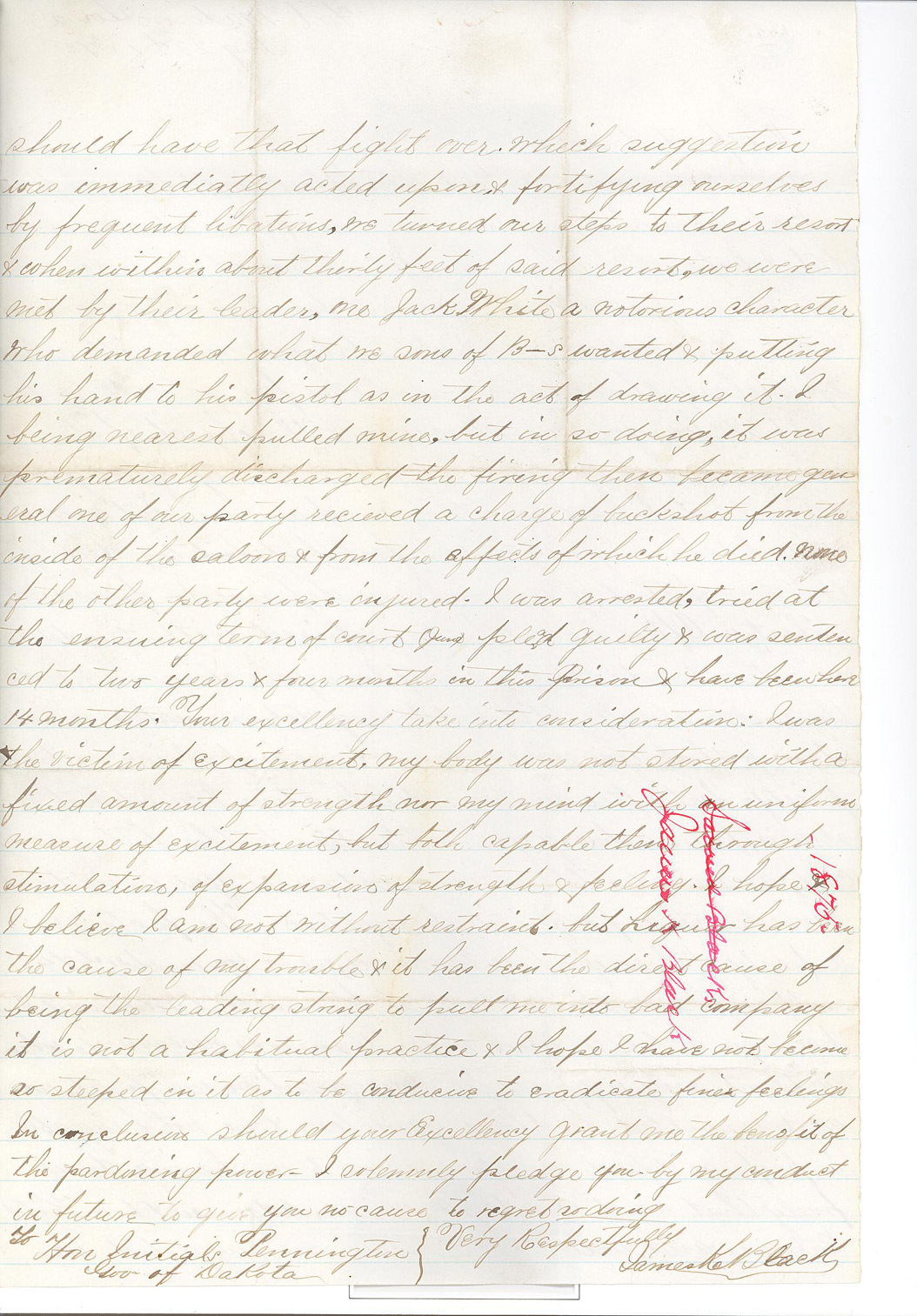 You doubtless will be surprised at receiving a letter from an utter stranger – but I hope after I have fully explained the motive which inspired me, you will pardon my presumption. It is not my desire to fatigue you with a long epistolary elucidation – only so far as will be essential for your consideration, & the object of its mission. I have been one of the erring young men & now that I have no other companions but my thoughts in my solitude, I but too deeply the loss of that of which I am deprived – personal liberty. Often have I been inspired with the determination to address you & implore your clemency, but, there was always attached to my determination a hesitancy, that you might deem it an impulsive impropriety, but after mature deliberation I could not restrain, from asking your attention to the facts in any case, and under these circumstances you would but consider it, a perquisite perogative. The facts are: a party of three of which I was one, were (on March 21st 74) walking through the street of Bismarck & making I presume a little more noise than was necessary, when without any aggressive movement on our part, we were assaulted by three gamblers, & we not being able to properly defend ourselves, owing to our having drank freely that and the day previous, adjourned to a Hotel Baroom, and while there some one suggested we should have that fight over which suggestion was immediately acted upon, & fortifying ourselves by frequent libations, new turned our steps to their resort & when within about thirty feet of said resort, we were met by their leader, one Jack White a notorious character who demanded what we sons of B-----s wanted & putting his hand to his pistol as in the act of drawing it. I being nearest pulled mine, but in so doing, it was prematurely discharged - the firing then became general one of our party received a charge of buckshot from the inside of the saloon & from the affects of which he died. None of the other party were injured. I was arrested, tried at the ensuing term of court (June) plea^d guilty & was sentenced to two years & four months in the Prison & have been here 14 months. Your excellency take into consideration: I was the victim of excitement, my body was not stored with a fixed amount of strength nor my mind with an uniform measure of excitement, but both capable then through stimulation, of expansion of strength & feeling. I hope & I believe I am not without restraint, but liquor has been the cause of my trouble & it has been the direct cause of being the leading string to pull me into bad company it is not a habitual practice & I hope I have not become so steeped in it as to be conducive to eradicate fine feelings. In conclusion should your Excellency grant me the benefit of the pardoning power – I solemnly pledge you by my conduct in future to give you no cause to regret so doing. 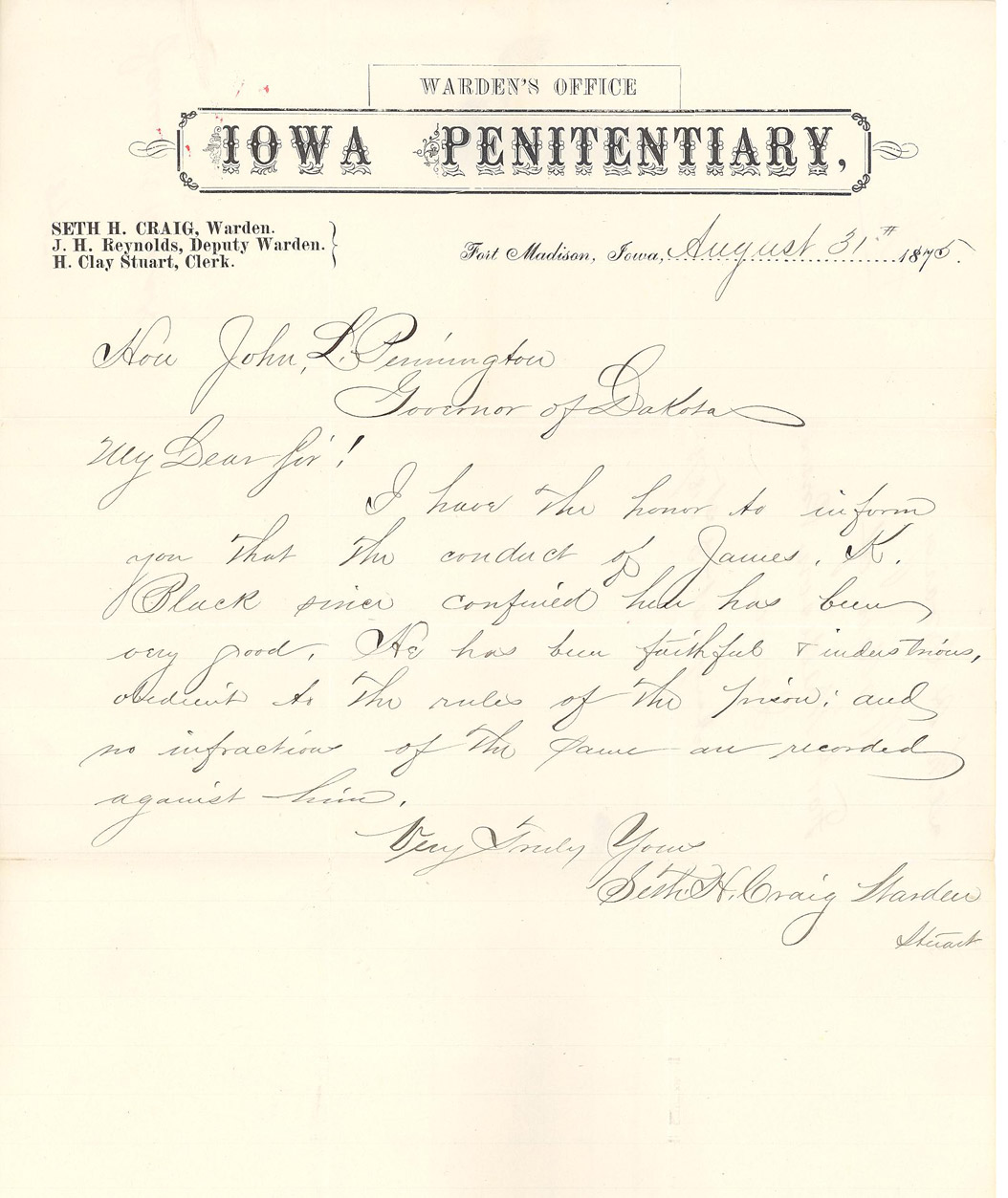 Warden's Letter from Iowa The warden of the Iowa state prison wrote a letter to support James Black’s request for a pardon. SHSND Series 32154.

I have the honor to inform you that the conduct of James. K. Black since confined here has been very good. He has been faithful and industrious, obedient to the rules of the prison; and no infractions of the laws are recorded against him. 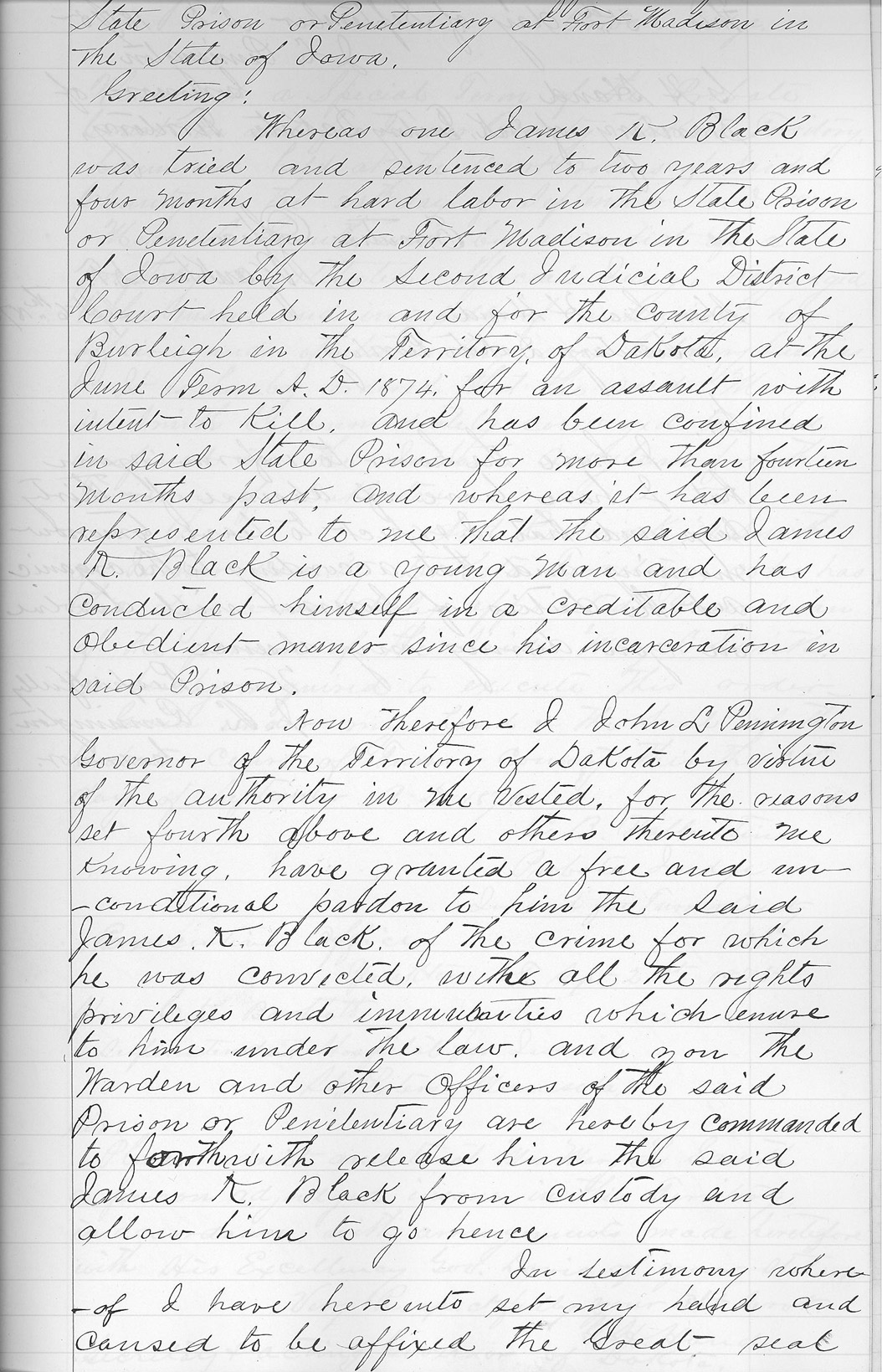 Whereas one James K. Black was tried and sentenced to two years and four months at hard labor in the State Prison or Penitentiary at Fort Madison in the State of Iowa by the Second Judicial District Court held in and for the county of Burleigh in the Territory of Dakota, at the June Term A. D. 1874, for an assault with intent to kill, and has been confined in said State Prison for more than fourteen months past, and whereas it has been represented to me that the said James K. Black is a young man and has conducted himself in a creditable and obedient manner since his incarceration in said Prison.

Now therefore I John L Pennington Governor of the Territory of Dakota by virtue of the authority in me vested, for the reason set forth above and others thereto me knowing, have granted a free and unconditional pardon to him the said James K. Black. Of the crime for which he was convicted, with all the rights privileges and immunities which inure to him under the law,  and you the Warden and other officers of the said Prison or Penitentiary are hereby commanded to forthwith release him the said James K. Black from custody and allow him to go hence.

In testimony where of I have hereunto set my hand and caused to be affixed the Great Seal of the Territory of Dakota, Done at Yankton the Capital of said Territory  this 3rd day of September A. D. 1873.