The first U.S. Army post built in northern Dakota Territory was Fort Abercrombie on the Red River. (See Map 1) The fort was built in 1858 at the crossroads of the Red River and the oxcart trails heading north to Fort Garry in Canada. Wagon trails led through that point to the gold fields in Canada, Montana, and Idaho. In 1860, the post was re-built on high ground on the west bank of the Red River. 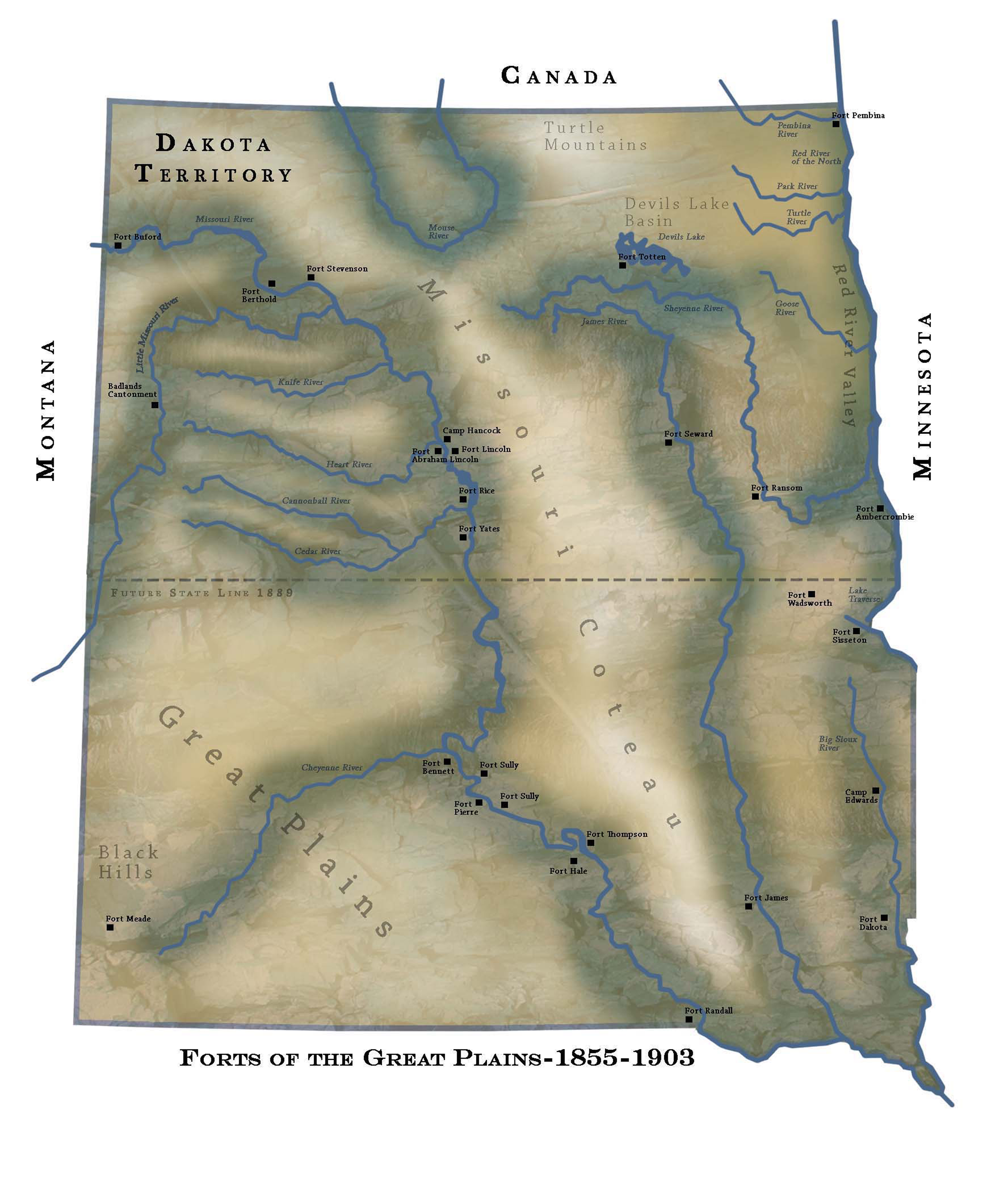 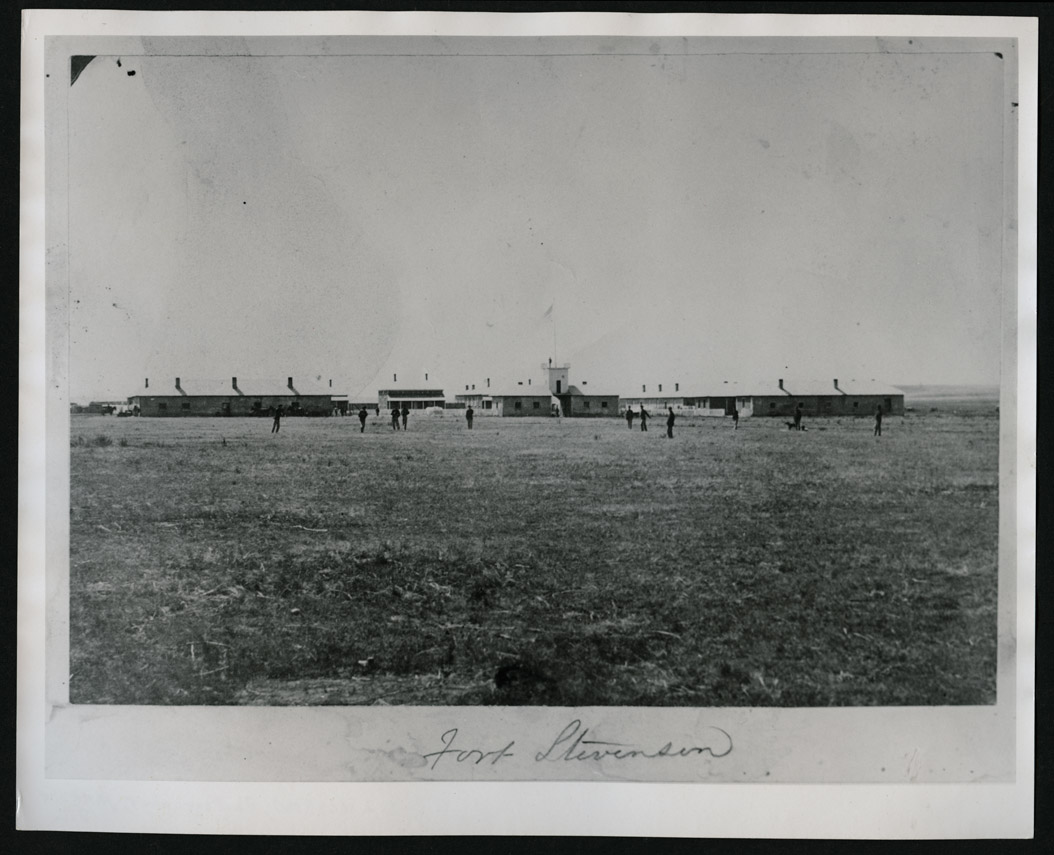 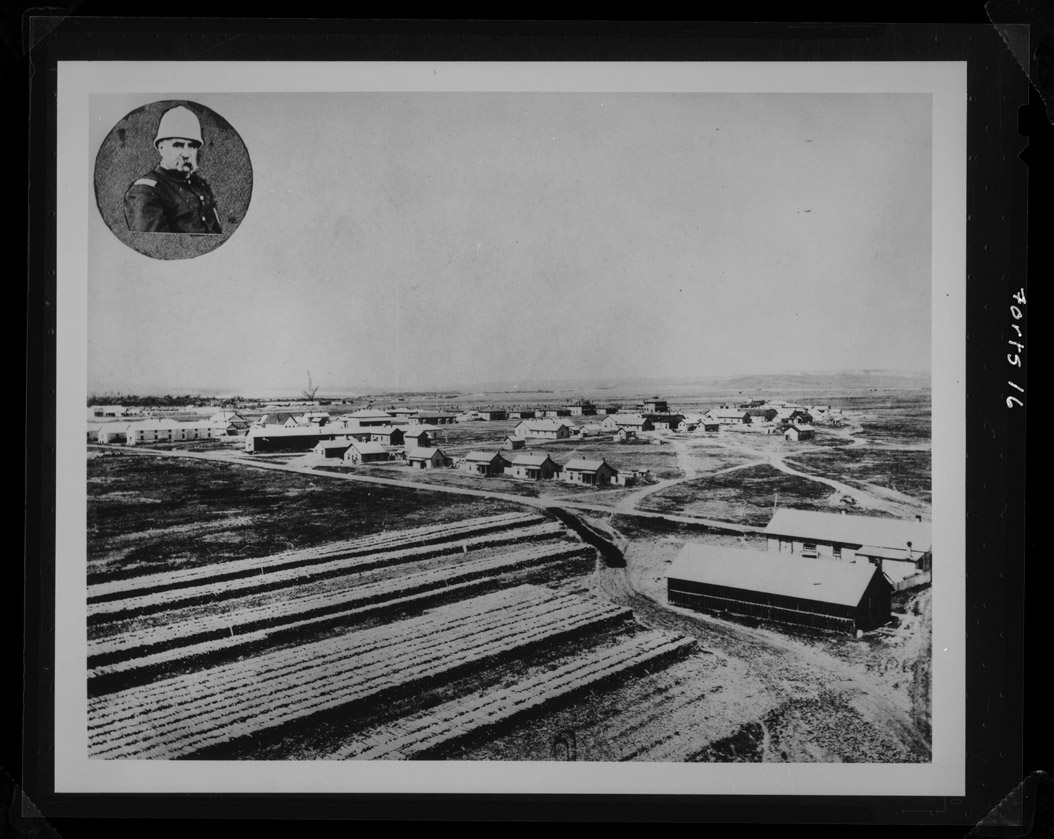 Image 2: Fort Buford was an isolated post. It was not near the railroad or any major towns. The residents of the post depended on supplies brought up the river between May and October. Supplies included food and clothing. Mail moved up and down the river, but was carried overland during the winter. Among the last regiments to serve at Fort Buford were the 10th Cavalry and the 25th Infantry. Both units enlisted African American soldiers who became known as the Buffalo Soldiers. SHSND 0474-008. 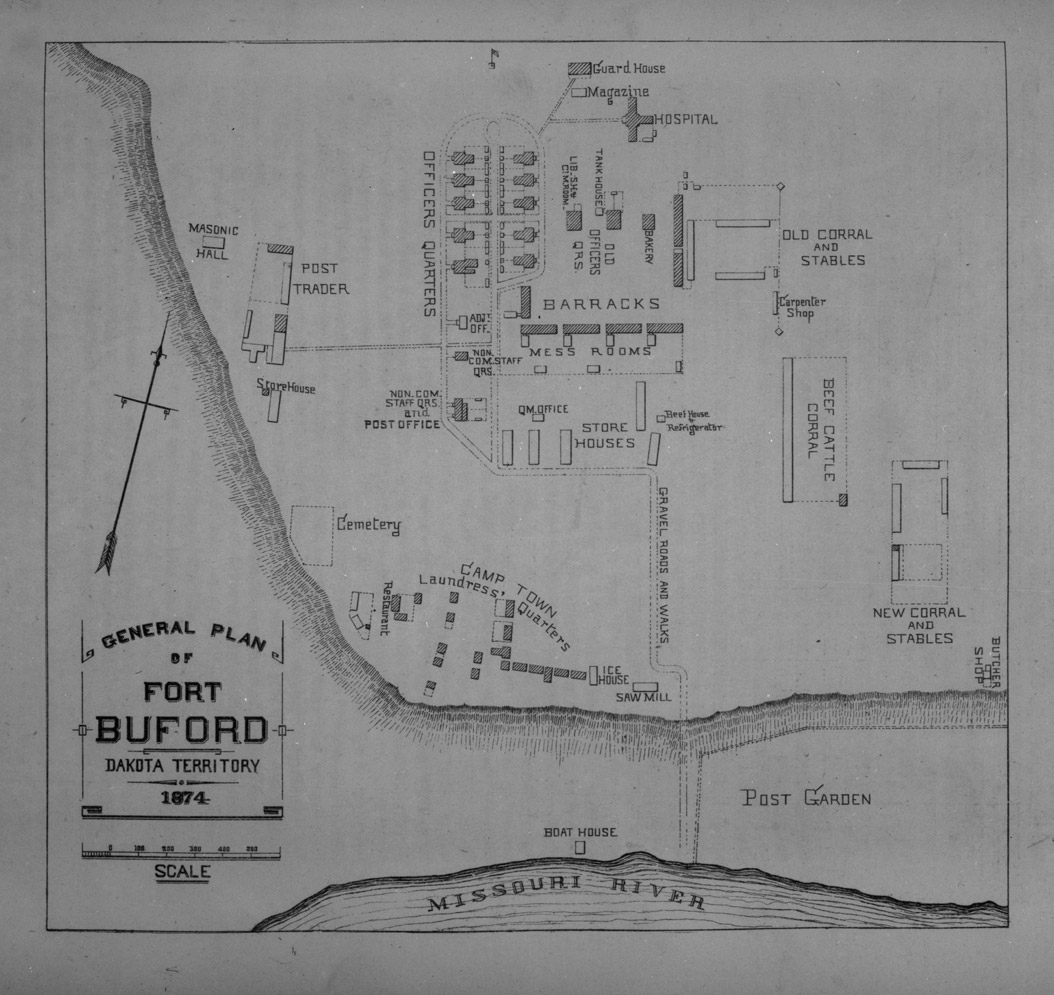 Image 3: Ft. Buford was built on the east (or north) side of the Missouri River near the confluence with the Yellowstone River. Like most other posts it depended on the river for its water source. Officers’ quarters included rooms for officers’ families. The enlisted men lived in barracks. Laundresses’ quarters were closer to the river. Laundresses worked for both officers and enlisted men. The post had all the necessities of a small village including the first Mason’s Hall (a private men’s organization) in northern Dakota Territory. SHSND 0474-07. 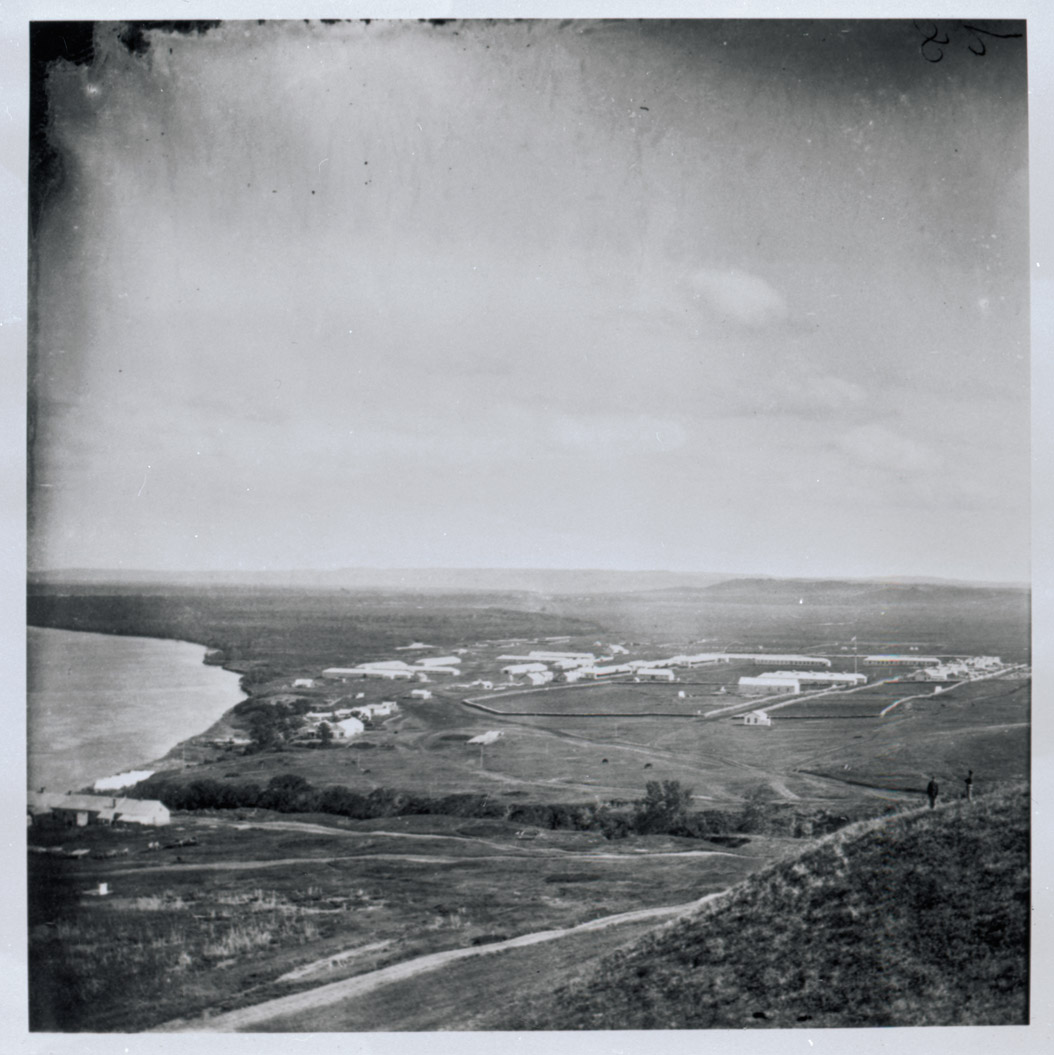 Image 4: Fort Abraham Lincoln was built on the west bank of the Missouri River. Very nearby was the infantry post, Fort McKean. Fort Abraham Lincoln was commanded by Colonel George Armstrong Custer until his death in battle in June, 1876. Custer led important expeditions to support the Northern Pacific Railroad survey and to the Black Hills from Fort A. Lincoln. Fort Lincoln did not have a stockade fence around it. SHSND 0260-01. 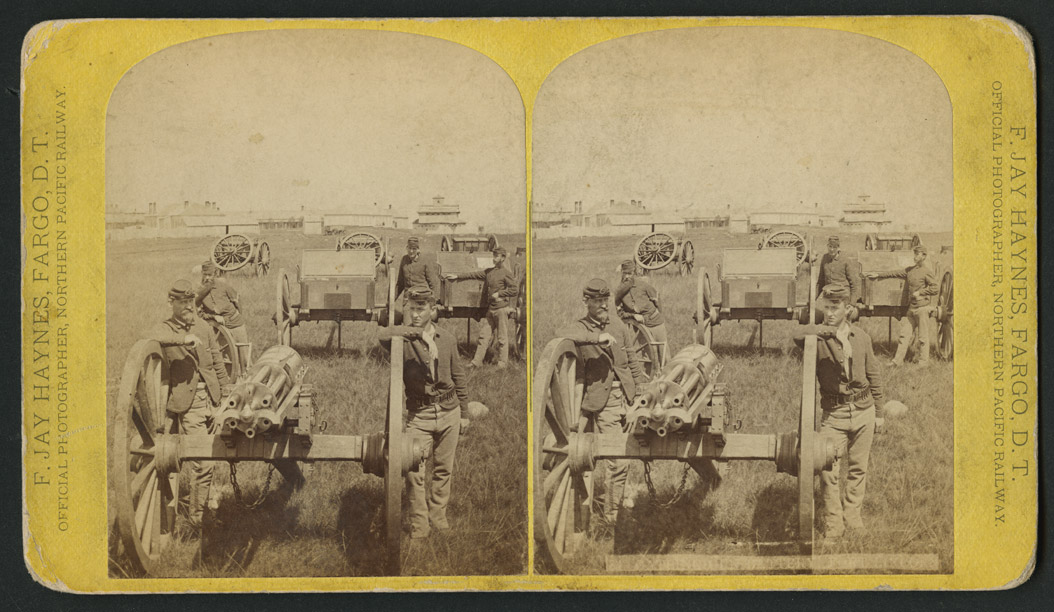 Image 5: Soldiers stand with the Gatling guns at Fort Abraham Lincoln. The Gatling gun was a rapid-fire weapon that could be drawn by horses wherever the Army went. The cylinders were turned by a crank operated by a soldier. Gatling guns were first used in the Civil War. They were a formidable new weapon in battle against the Dakotas. SHSND 0119-027.

When war began between the Santee Dakotas of southern Minnesota and the U.S. government (1862), the soldiers at Fort Abercrombie quickly began to build fortifications out of the large barrels used to store pork, beef, and flour. Dirt was packed around the barrels. Cannons were placed on three corners.

Several times in the next several weeks, Dakotas attacked the post, but were repelled by the soldiers. On September 23, reinforcements arrived and the Dakotas left the area. Fort Abercrombie remained an active Army post until 1877. The railroad and the establishment of reservations for the Dakotas had taken over the role of the post.

A series of important Army posts were established along the Missouri River following the U.S.-Dakota War. General Alfred Sully located these posts during his trips up the Missouri River in 1864 and 1865. The first was Fort Rice, just north of the mouth of the Cannonball River. Fort Rice was occupied from 1864 to 1878. Fort Berthold was built on the site of a fur-trading post. Two years later, the military function of Fort Berthold was abandoned and the military operations moved to the new Fort Stevenson a few miles away. (See Image 1)

Fort Buford was built at about the same time as Fort Stevenson. (See Image 2) Both were built under the leadership of General Regis de Trobriand. General de Trobriand was born in France, but had come to the United States for the purpose of becoming an Army officer. (See Image 3)

Several other Army posts were located in northern Dakota Territory. Many of these had a very short existence. Before the Northern Pacific railroad was built, the soldiers at these forts helped to move the U.S. mail across the territory.  The posts also served as stopping places for freight wagons and travelers. This chart offers more details on the other Army posts. 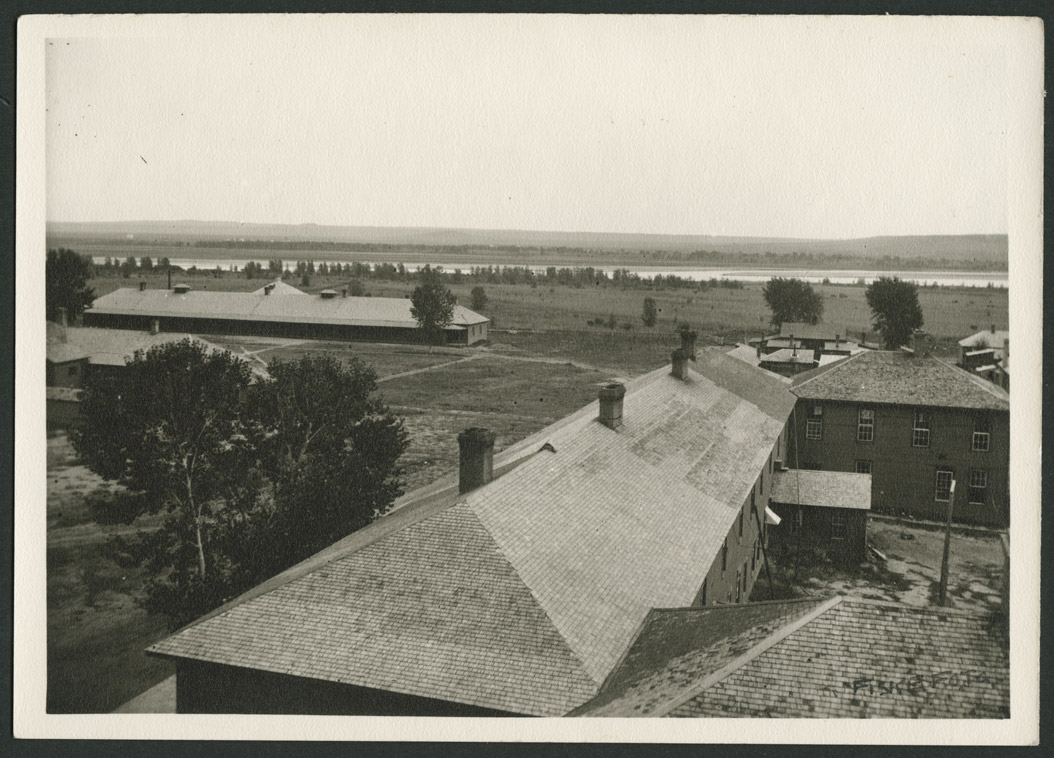 Why is this important? Military occupation of Dakota Territory brought about a major shift in the population of the northern Great Plains. The region had been homeland and hunting land for the Arikaras, Mandans, Hidatsas, Chippewas, Western Dakotas, Eastern Dakotas, and Middle Dakotas for centuries. (See Image 6) In addition, other tribes such as the Crows and Assiniboines traveled into the area to hunt and trade. With the exception of fur traders and soldiers, non-Indians did not take an interest in the area until the railroad was built. The railroad could not be built until the Army had established a strong presence in the area.