Unlike the other tribal communities of North Dakota, the Turtle Mountain Chippewas include a mixture of cultures with a common history. There are people whose family roots are in the Chippewa (Ojibwa) or the Cree (a Canadian tribe) tribes. There are also many people of Turtle Mountain who are descended from a Cree or Chippewa ancestor who married a French or Scottish trader in the 18th or 19th centuries. These people are the Métis. (See Image 1.) 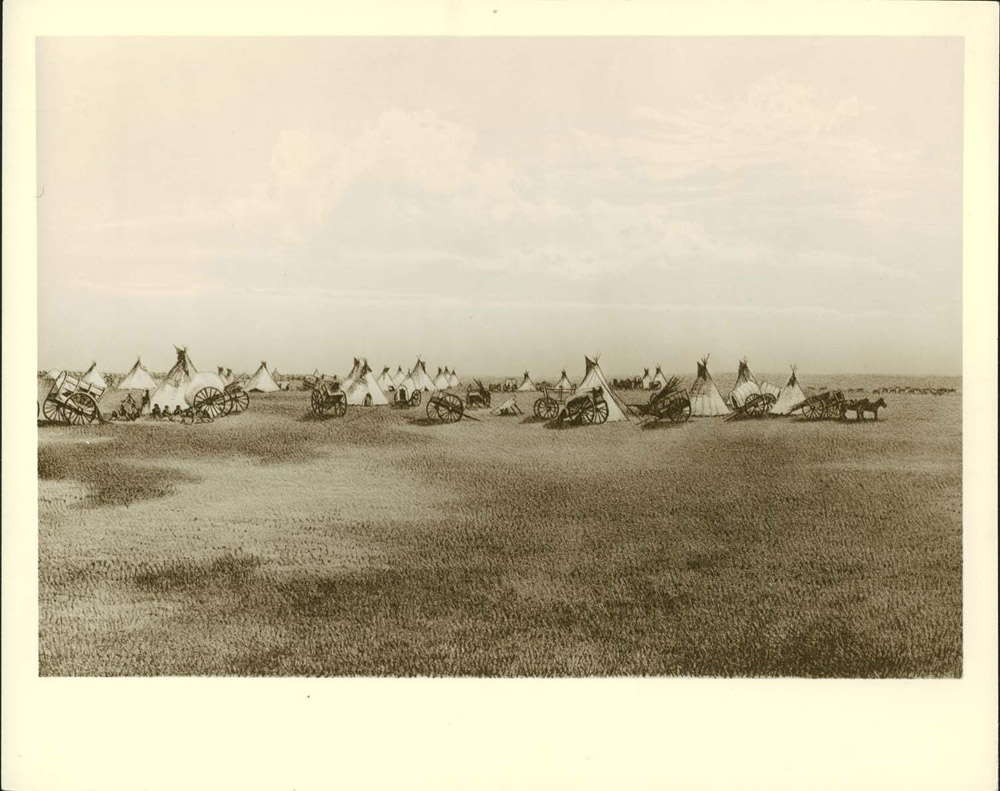 Image 1: The Métis culture developed in the 18th century as French fur traders married Chippewa and Cree women. Their children grew up in a home that mixed Chippewa and European cultures. From this mixture, came the Métis culture. Their clothing, language, and music were different than those of their Chippewa and French (or Scottish) parents. From the French, they learned to use wheeled carts to transport the hides and meat they gathered on their bison hunts. From their Chippewa ancestors, they chose to live in tipis while traveling. SHSND C0621.

In the 1700s, the Chippewas moved into northern Minnesota from previous homes along Lake Superior. They were already engaged in the fur trade business. Part of the motivation to move farther west was to find more fur-bearing animals and to trade at the growing number of fur-trade posts in the Hudson’s Bay drainage. However, the Chippewas occupation of northern Minnesota was often blocked by Dakotas who also lived in the northern woodlands. 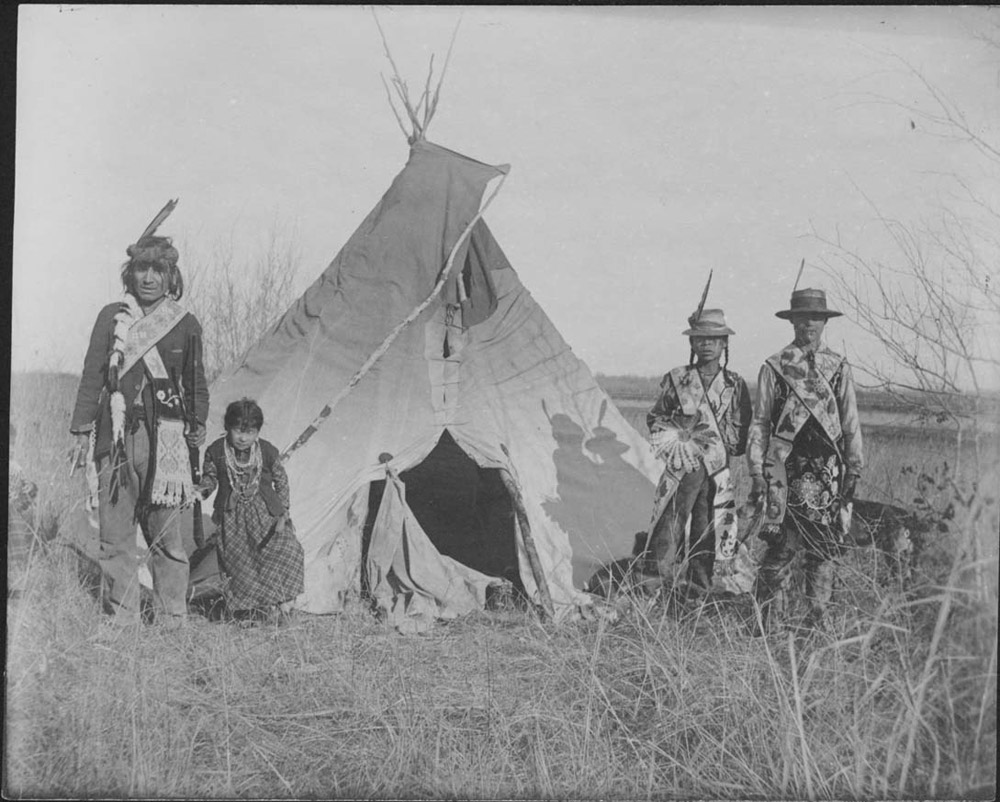 Image 2: This Chippewa family shows how the Plains Chippewa adapted to Plains living by borrowing some traditions from Plains Indians while keeping some of their woodland Chippewa traditions. The family is living in a tipi (from the Dakotas) while they are hunting bison or other large game. The bandolier bags that cross their shoulders are typical of the Chippewa style. The floral beadwork designs on the bandolier bags are part of the woodland Chippewa tradition. Much of their clothing is made from woven cloth which they got in trade with European American trading companies. They also adopted the style of dresses, trousers, and shirts from European Americans. SHSND A3462.

Fur and bison hunting became a way of life for the Chippewas. As they adapted to life on the Plains, they also “borrowed” some customs of other tribes such as hide-covered tipis and the Sun Dance. (See Image 2.) They acquired horses for travel and hunting. As they went through these adaptive processes, the tribes came to be known by new names. Some Chippewas who lived on the Plains called themselves Bungi. Non-Indians called them Plains Chippewa or Plains Ojibwa. 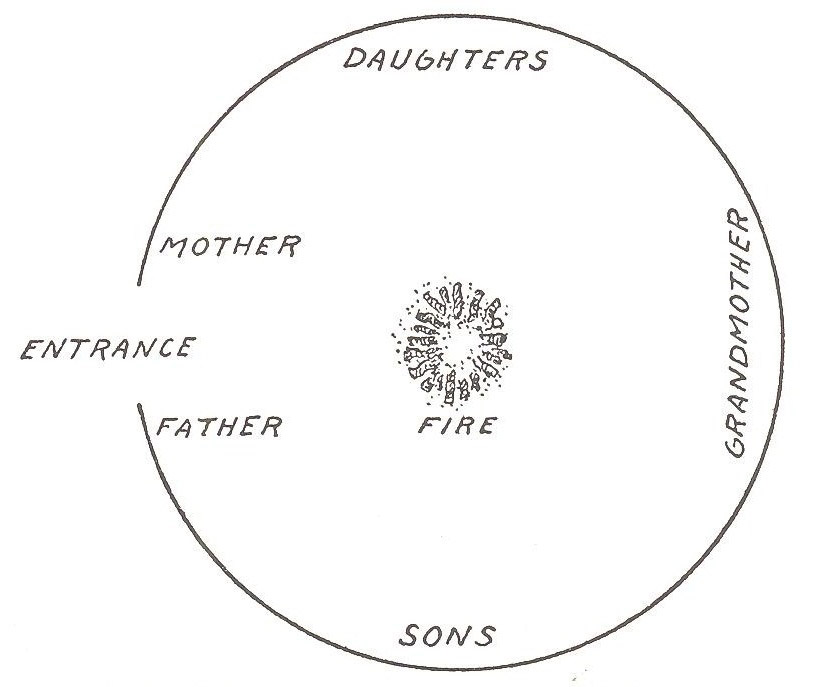 Image 3: There were many loving “fathers” and “mothers” to help raise children in a Chippewa village. Inside the tipi, girl children stayed near their mothers where they learned the skills a mature Chippewa woman needed to be successful in taking care of her family. The boys stayed near their father. The boys learned adult male skills from their fathers and uncles. The Grandmother had an important place in the tipi, too. On a cold night, the family would sleep with their feet pointing toward the fire for warmth. One of the elderly grandparents would stay up late on the coldest nights to keep the fire burning. From Densmore, Chippewa Customs, 1929.

The clothing of the Turtle Mountain Chippewas reflected their diverse cultural heritage. Women borrowed the clothing style of non-Indian women, but they decorated their cloth dresses with designs worked with beads or dyed porcupine quills. Métis men wore a hooded coat called a capote that was made from a Hudson’s Bay blanket. The coat was wrapped with a distinctive, brightly colored woven sash. Most men and women wore soft leather moccasins that were decorated with floral beaded or quilled designs. Their moccasins were of a distinctive style with a puckered toe. Sometimes, the Chippewas were called “the people of the puckered moccasins.”

Children of the Chippewa family called their father and his brothers “father.” Children called their mother and her sisters “mother.” All of these relatives participated in protecting, raising, and educating the children. (See Image 3.) Children belonged to the clan of their father and stayed with that clan throughout their lives. A young person could not marry a person of their own clan. However, members of clans lived in different villages, so when Chippewas traveled, they would be welcomed by members of their own clan wherever they went. Clan membership was passed from father to child, but French or Scottish fathers of Chippewa children did not belong to a clan. Therefore, Métis children did not belong to a clan unless a Métis woman married a Chippewa man who passed clan membership on to his children.

Plains Chippewa communities were organized into bands that included several families. People could leave one band and join another if they saw an advantage in doing so. Each band was named for its leader. Leaders usually inherited the position, but could not keep the position if they did not provide well for the people of their band. The leader had assistants and looked to the council for advice. A group of men was assigned the role of maintaining order. Métis bands chose to follow a similar community organization.

Though the Plains Chippewas adopted a Plains lifestyle, they maintained their old religious views. Their sacred spirit was Gitche Manitou (GIT chee MAN ih too). The Chippewas participated in ceremonies to encourage Gitche Manitou to help individuals or the entire band. Many Métis chose to follow the religion of their French fathers and became Catholic Christians.

Why is this important?  Between 1200 and 1860, many of the Indian tribes of the Great Plains organized into groups with similar languages and cultural characteristics. However, the tribes continued to adapt as they moved from one place to another. Trade and social encounters brought new ideas and new customs to each tribe. The Chippewas moved from the woodlands to the Great Plains and changed their customs to match their new way of life. When the Chippewas intermarried with European fur traders, a new cultural group, the Métis, emerged. Every community of Plains Indians changed when it was right to do so, but retained important parts of their cultures that helped them move forward with their lives.