Some origin stories tell us about conflicts between tribes in the ancient past. The Lakotas and Dakotas tell of conflict in the creation of their People and their tribes. Other than these stories of the oral tradition there are few facts about conflict between Peoples.

We know that projectile points of Knife River flint were used for hunting. However, we can assume that the same weapons would have been used if the People were attacked by People of another group or tribe. People might attack other People if resources were in short supply. If the climate had become drier, bison or food plants would not have been available for everyone. People would have resented anyone else coming into their hunting territory. This would be a cause for conflict.

People might also have attacked if they were afraid of strangers. If the People who approached a camp or village were unknown to the People in the camp, they might have prepared for a battle. This is a common human response when it is necessary to protect a village and its food supply. However, some People welcomed strangers because it was an opportunity to trade and learn about new ideas. 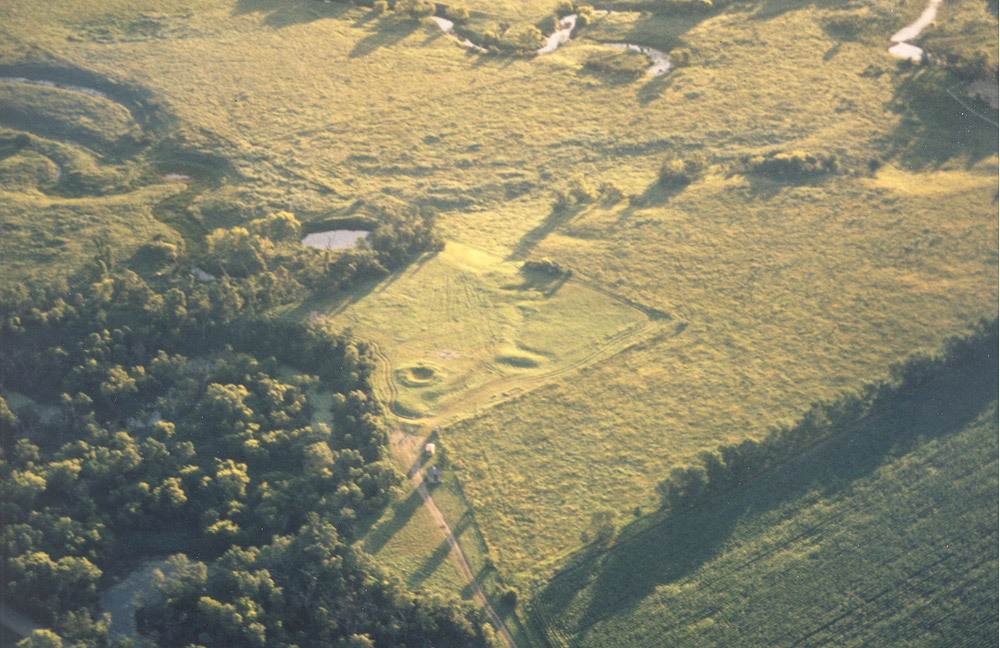 Image 1: This aerial view of Menoken Village shows the outline of the palisade wall that surrounded the village on the open sides. The palisade was made of logs set upright on the edge of a ditch. The west and north sides of the village are set against the banks of Apple Creek. Four bastions are clearly visible along the palisade wall. The right-angled line around the outside is the modern fence that separates the village site (a public State Historic Site) from the privately owned fields beyond. The palisade indicates that the People of Menoken Village felt that they needed protection from other People.SHSND AHP

People of the Plains Village tradition sometimes protected their villages with walls. These palisades were made of logs set upright in the ground. There was usually a ditch around the outside of the wall. Some palisade walls had bastions. A bastion was an extension of the wall which gave observers a wider view of the area around the village. The bastion allowed the People to defend their village from attack in several directions. The bastion may also have served as a notice to strangers that this village was prepared to defend itself.

Menoken Village had a palisade with bastions. (See Image 1.) The marks of the palisade and the bastions are still visible on the ground and from the air. We do not know who the villagers were afraid of, but it appears that the villagers expected that someone might attack their village. They were prepared to defend their homes.

Why is this important?  In the on-going archaeological studies of ancient Peoples, we can learn much about who we are today and why we do what we do. We know that conflict has been a part of human history from the earliest times. We can also assume (though there is less evidence) that People sought to avoid conflict whenever possible by forming alliances. They formed alliances for greater protection, but alliances also provided an advantage in trade and social encounters. Many human interactions today have their origins in the very ancient past. Ancient People are not strangers to us; they are our ancestors who have much to teach us.