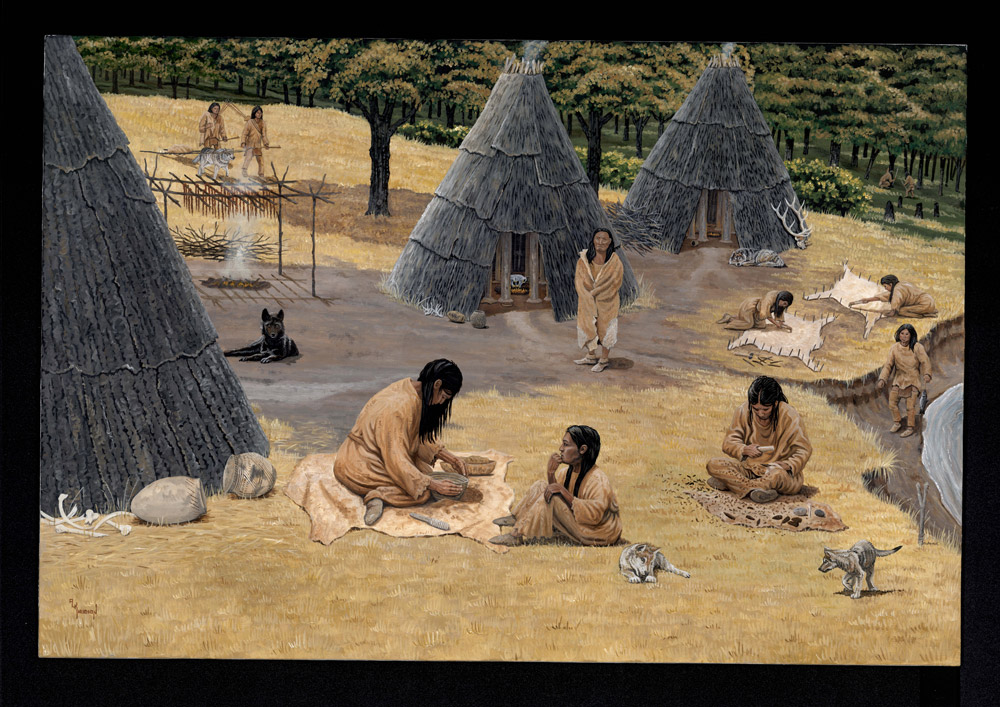 Image 1: Naze Village. The artist shows the Naze Village as a very busy place about 400 B.C. Hunters are returning with game that they are carrying on a travois. Meat is drying over a smoky fire. Women are preparing hides and making pottery. A young man is knapping flint into a projectile point or another tool. Another man is bringing fish from the creek. The pots will be used for cooking later on. The decorations on the pots indicate that the People of the Naze Village had some leisure time to think about making their pots beautiful as well as practical. The houses were built from oak log frames. Grass and tree bark was used to make walls of the houses. Painting by Andrew Knudson for SHSND AHP.

We don’t know when the first village was organized. Archaeologists refer to camps where they have found hearths, or places where People camped for a time, but did not stay long. We know little about these villages. However, we know that People began to gather together in larger groups for hunting and protection as societies became more organized.

The earliest village we know of in North Dakota is the Naze (NAH zee) Village on the James River. Although we do not know for sure when the village began, archaeologists tell us that People lived in a village at the site around 400 B.C. (See Image 1.)

In a village, we can assume that People spoke the same language and shared cultural qualities such as methods of making tools. Very likely, the People of the village shared a religious perspective as well. The village, like a large family, provided care for children. The adults shared their knowledge with children so that they would grow up to be successful adults. The village had the resources to help raise children if the parents died or were unable to provide for their children.

Early villages were probably rather small. If the village had a permanent location, the People divided up the tasks necessary for making a living. Men and older boys hunted large game. Women tended young children and probably made pottery and clothing. Women helped to process the game after a hunt cutting up the meat for drying and removing the other useful parts of the carcass. In a village, some people could specialize in certain tasks. A very competent potter could trade pots for other necessities such as food or hides. A good hunter could trade food for a warm garment made by a clothing-maker.

Villages had to be located where People could have access to things they needed. Food and water were most important. Most villages were located on a stream or river. Since animals go to water to drink, hunters would not have to go far to find game if they lived near a good water source. On the treeless plains of North Dakota, People found trees for building houses and fruit-bearing shrubs near creeks and rivers. The Naze Village on the James River and the Menoken Village on Apple Creek were perfectly located for the People to find all the supplies they needed. 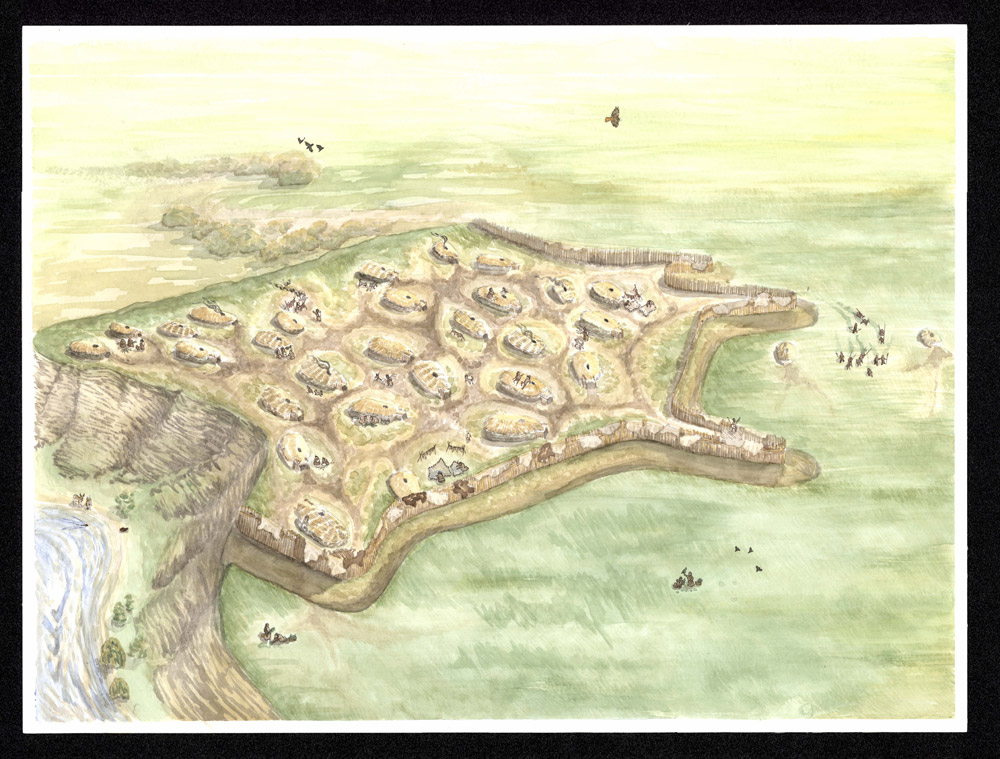 Image 2: Menoken Village. Menoken Village was built along Apple Creek in south-central North Dakota around 1200 A.D. The houses were built of log posts covered with grass, sticks, and mud. A hole in the center of the roof allowed smoke to escape from the fires which both heated the house and cooked the food. This village was fortified with a palisade wall of upright logs. The palisade provided protection from attack. The People often sat on the roofs of their houses or used the roof space to store some of their things. The artist shows women tanning hides and drying meat. Children and dogs play between the houses. Apple Creek forms a boundary of the village on the west (left) side, but is also convenient as a water source. Painting by Becky Barnes for SHSND AHP.

The Naze VillageWe don’t know what the village was actually called by the People who lived there. Naze is the name given to the village site by archaeologists who located this village. It is a very important archaeological site because it is the oldest known village site in North Dakota. The burned ruins of one of the houses provided a lot of information on how the houses were constructed. probably had a small population of about 100 People. They lived in conical houses built with oak logs that they brought from the banks of the James River. The People of the Naze Village raised their children, hunted animals for meat and hides, and gathered plants. The meat and plants had to be dried to preserve the food for winter use. The People of Naze Village also made clay pots and stone projectile points.

About 200 People lived in the ancient village near modern-day Menoken. (See Image 2.) Apple Creek provided water and fish. The oak trees, chokecherries, and plums that grew on the banks of the creek provided wood for building and fires, and fruits for summer and winter use. The great grasslands that surrounded the village were dotted with small water holes which were perfect places for bison and other animals to feed. The People of Menoken Village engaged in trade with visitors who brought mussel shells, corn, and other important trade items that the People of Menoken found useful.

Why is this important? As People adapted to life on the northern Great Plains and became more efficient hunters, they were able to provide food and safety to larger groups. The People came to identify with the group and developed a common culture. They became a village.

There were two types of villages on the Great Plains. Both the nomadic village and the sedentary village provided the People with safety, protection for the children, and a steady food supply. Each village type was important. Some Peoples chose one village type and later changed to the other; other Peoples chose one village type and maintained that lifestyle for centuries. The People of both nomadic villages and sedentary villages adapted to their world successfully.