Shelter is necessary, especially in North Dakota where winter and summer weather can be severe enough to cause the death of humans who have no shelter. It is a little hard to understand how the earliest People could have sheltered themselves and their children since they moved often. We know very little about the earliest forms of housing. We can assume that People took shelter in places where rock walls or caves protected them from wind and rain. However, archaeologists have found that by about 500 B.C. (or about 2,500 years ago) People built houses in a small village along the James River in North Dakota. (See Image 1.) Archaeologists have named this place the Naze (NAH-zee) site for the people who own the land today. Archaeologists are not sure if this site was a semi-permanent village or if it was a temporary camp. The culture of this time period is called Early Plains Woodland. 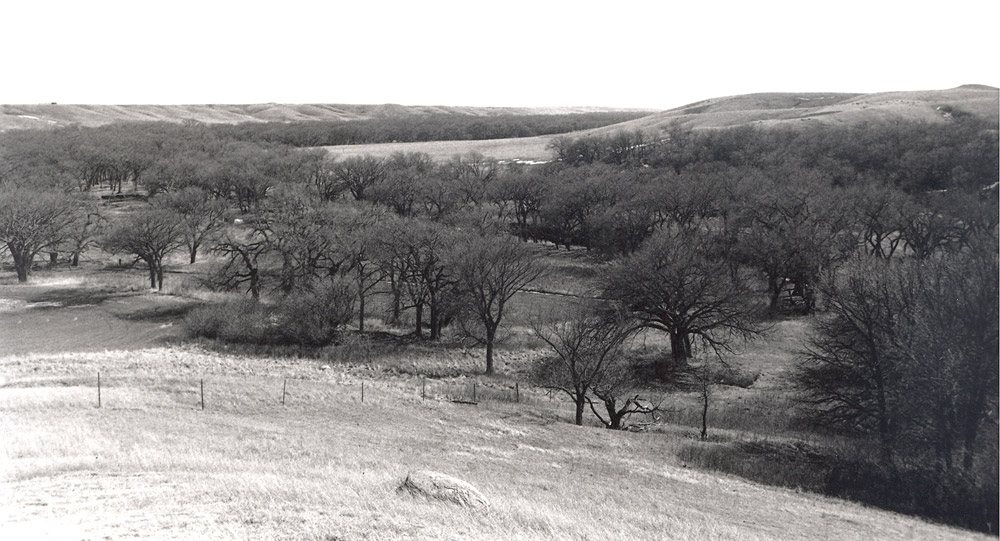 Image 1: This photograph looks toward the James River from the site of the Naze House. The People who built their village on the banks of the James River had access to fresh water, oak trees, and game animals. The People used the oak trees to build their houses. They might have ground acorns for food as well. SHSND, Archeology and Historic Preservation. 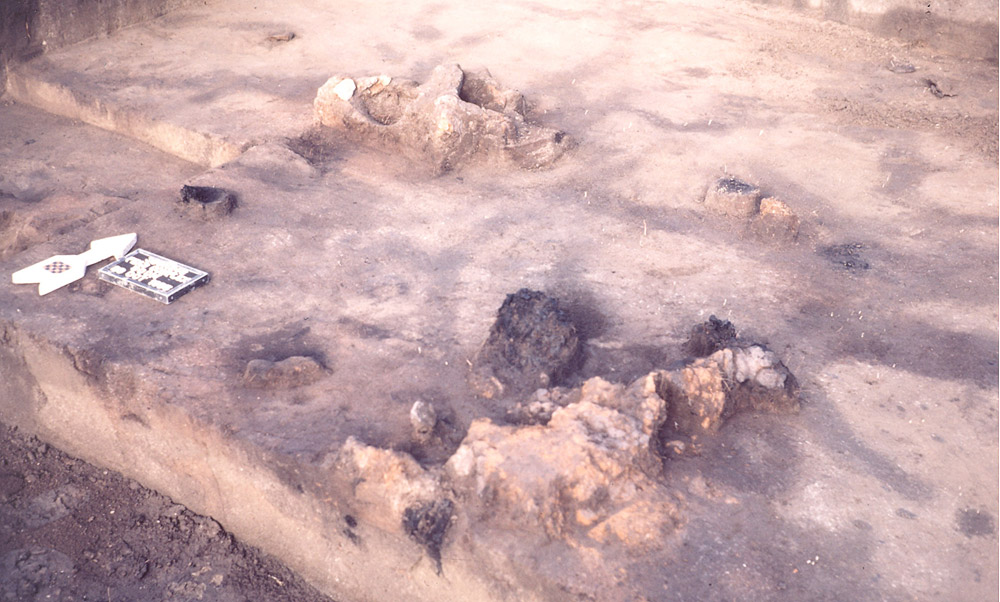 Image 2: When this house burned near the James River around 400 B.C., the remains were preserved for archaeologists to find in the 20th century. The dark lumps are charred oak posts that were inserted into the ground and then supported with mud daub. The daub is the raised, hollow areas of dried mud. The posts were set in pairs. Four pairs of oak posts supported the main part of the building. SHSND, Archeology and Historic Preservation. 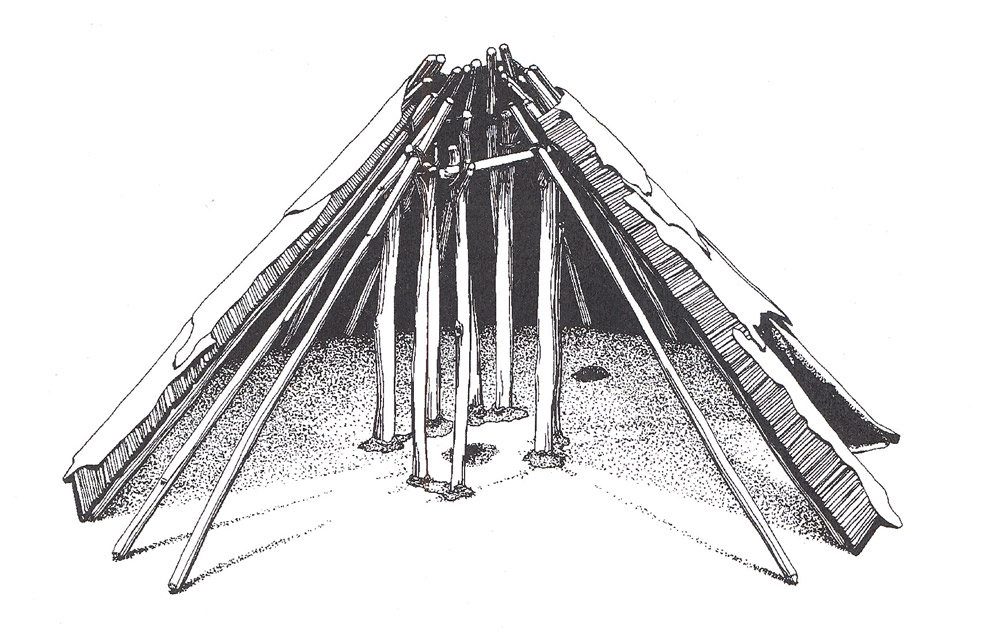 Image 3: Naze House. This is a drawing of what the Naze house might have looked like. Archaeologists found post holes and mud daub around them where a house had burned perhaps 2000 years ago. The posts were of oak. The house was probably covered with bark . This was a semi-permanent shelter where people might have lived for a few months during the late fall or winter. There was no hearth in this house suggesting that the People had their fires outside and heated stones which they brought into the house for heat and cooking. SHSND, Archeology and Historic Preservation.

At the Naze site, archaeologists found charred posts and some earth daub that demonstrated how the house had been built. The oak posts were set into the ground and supported with mud daub. (See Image 2.) The posts formed a roughly shaped square in the center of the house. These central posts supported other posts that leaned onto the main posts to form the walls of a small circular shelter, or house. (See Image 3.) The posts were probably covered with brush, wood, or tree bark. The house was about 323 square feet inside.

In the center of the Naze house, archaeologists found bones and bone tools. Some of the bones were from bison. There were also the remains of several plants including grape (Vitis species) and lambsquarter (Chenopodium species). Both wild plants are commonly found in this region. The People kept domesticated dogs. Most likely the dogs aided in hunting and in carrying burdens.

The site of the Naze house was used again by Peoples who occupied the site around 40 B.C. to 70 A.D., and again in 1100 A.D. Over time, the style of housing and the weapons and tools the People used changed quite a lot.

Remains of housing for ancient Peoples are rare. Most of what might remain of houses is buried under layers of soil. Some ancient camp sites were disturbed by 19th and 20th century farming practices. Some were washed away by flooding. It is also important to remember that some types of housing would not leave much evidence. For instance, tipis would not likely be preserved for thousands of years. However, the presence of stones arranged in circles (sometimes called tipi rings) tells us that the People sometimes used tipis for shelter. 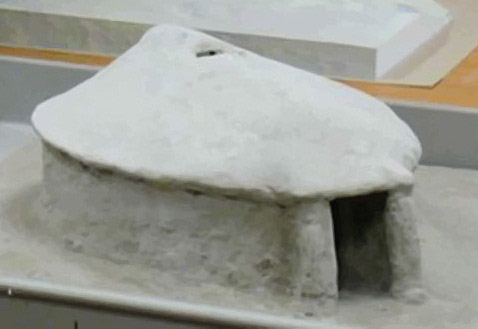 Image 4: Menoken Earthlodge model. This is a model of one type of earthlodge (House 17) that was built in the Menoken village on Apple Creek in Burleigh County. This model was made according to scale based on the post holes and excavations located by archaeologists at the Menoken village site. The Menoken earthlodges were built from logs, then covered with dried grass, and then covered over with clay which made the house warm and dry. This model was based on a house that burned which protected the charred post holes from erosion. Model by Carolyn Handy SHSND Archeology and Historic Preservation. 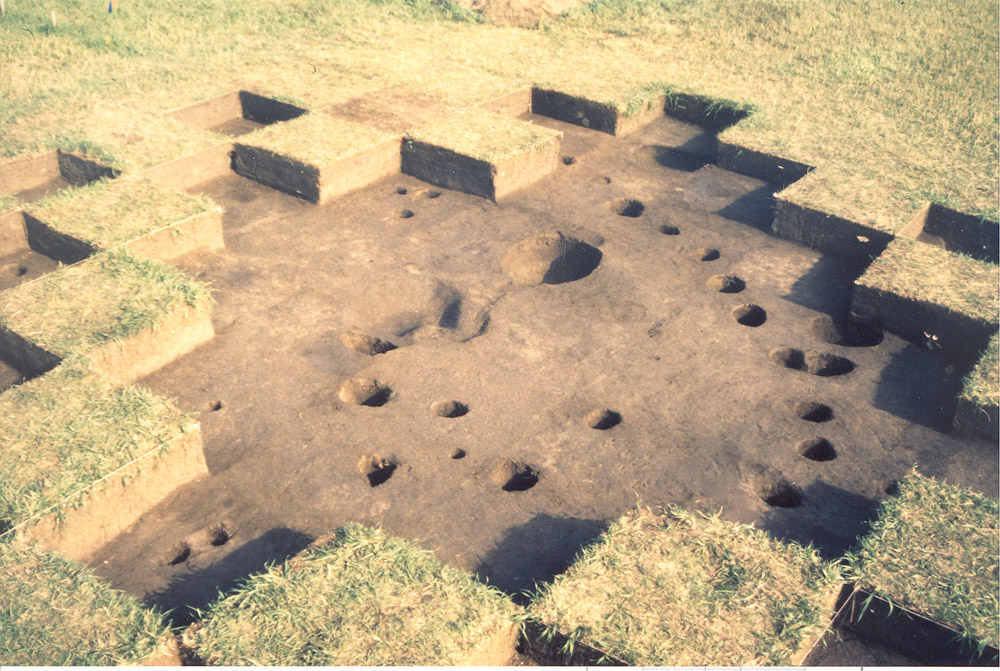 Image 5: This photograph of the excavation of House 17 at Menoken Village clearly shows the holes where the posts were set to support the house. The large depression in the center is the hearth or fireplace. This picture was taken before the excavation was complete. SHSND, Archeology and Historic Preservation.

Around 1200 A.D., People settled along Apple Creek in south central North Dakota in a fortified village that is now called Menoken Village. Their houses were built with layers of sticks, grass, and mud over a frame of wood beams. (See Image 4.) The houses were designed for to be used by a family for several years. People left the village to hunt or trade, but came back to the same place and the same house again. The houses were a little larger than the Naze house. They measured about 16 X 23 feet or 370 square feet. (See Image 5.) These houses were warm in the winter and cool in the summer.  Near the center of the house was a hearth pit where a fire burned for cooking and heating. Smoke rose from the fire to escape through the smoke hole in the roof. (See Image 6.) 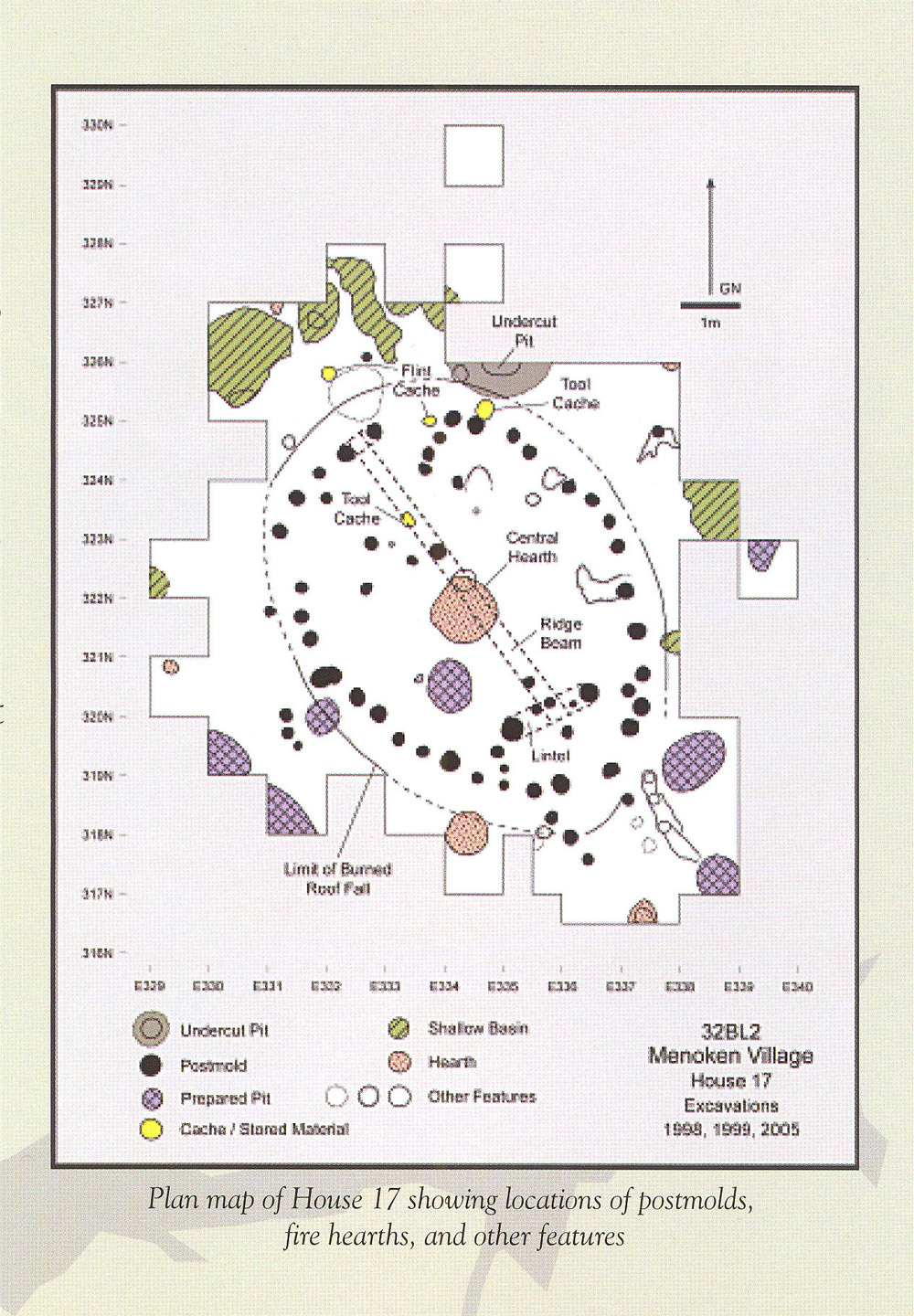 Image 6: Menoken House 17. The Menoken Earthlodge. This drawing was made by archaeologists who excavated this house (House 17) at the Menoken village site. The house was supported by a line of center poles. Side poles supported the roof poles which rested on the center poles. The People placed the hearth in the center of the earthlodge. A smoke hole above allowed the smoke to leave the building. The house floor was a little below the ground around it; a ramp led from the door down into the house. House 17 had a bell-shaped cache pit at the back (north) end. SHSND, Archeology and Historic Preservation.

The houses of the Menoken Village were built partially below the surface of the ground. A ramp led from the entrance down to the earthen floor. Because the roof was strong, People used the roof space as a storage and work area. Near the back wall of the house was a bell-shaped pit which was more than six feet wide at the base and more than three feet deep. Pits of this type may have been used to store dried foods over long periods of time.

The People who lived in Menoken Village were part of an important transition between hunter-gathers and hunter-gardeners. Hunter-gatherers moved often to find game and to harvest plants that they needed for food and medicine. Hunter-gardeners lived in settled (sedentary) villages where they raised vegetables for food. Hunter-gardeners periodically left their villages to hunt bison and other big game. They returned to their villages when the hunt was over. The People of Menoken were not gardeners, though we know that they did eat some corn that they probably acquired by trade. Probably, within a few years after abandoning this village, the People began to raise corn and other crops in gardens.

Why is this important?  Remains of houses are far more rare than stone points or pieces of pottery. When archaeologists find the houses of ancient Peoples, they learn more about how the People lived. House remains indicate that over thousands of years, People adapted to the climate of the northern Great Plains and learned to use available materials to make their houses comfortable. Housing also tells us that some People were nomadic. They moved regularly to find game and wild plants that they used for food, tools, and other needs. The houses of nomadic Peoples were either temporary shelters or houses that they took with them as they traveled. As People settled in North Dakota, they built substantial houses of wood and earth that lasted about ten years before they were replaced. People who lived in sedentary villages were ready to cultivate crops to complete their food systems.