There are three distinct geographical regions in North Dakota. Each region has distinguishing characteristics which influence the economies of the regions. (See Map 1.) 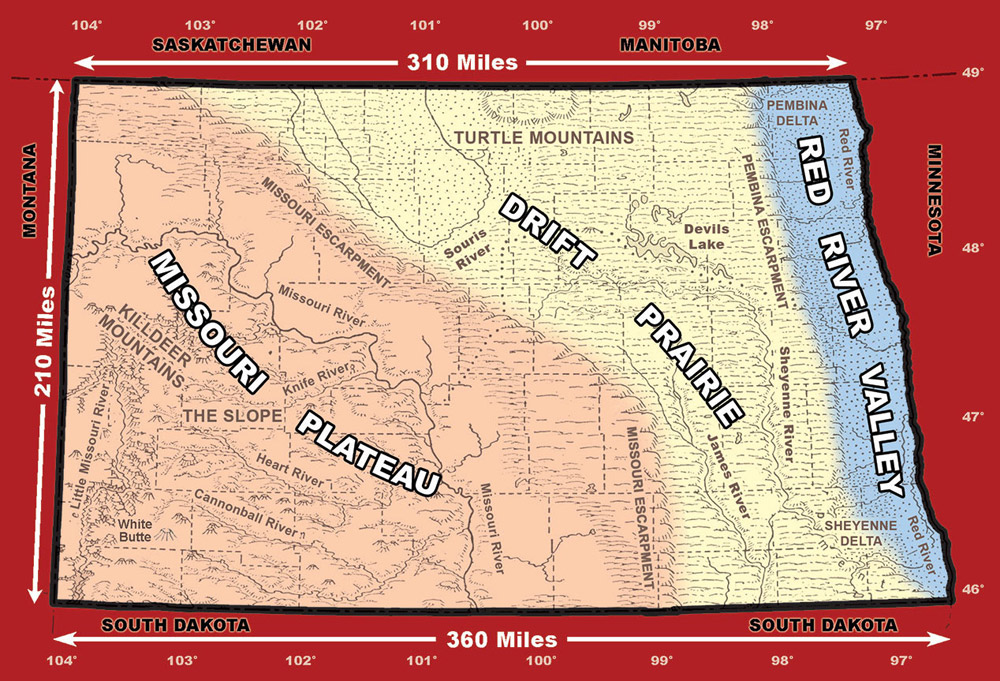 Map 1: North Dakota has three distinct regions based on geography and soil. The Red River Valley is flat with good soil and little drainage. The Drift Prairie is characterized by small ponds, and hills, and rocky soil. The Missouri Plateau is the highest land in North Dakota. The Missouri River, White Butte (the highest point in the state), and the badlands are located within the Missouri Plateau. Map by Cassie Theurer.

The Red River Valley, on the eastern edge of North Dakota, is broad and flat. (See Image 1.) The river valley is very young, geologically speaking, so the river has not yet cut a deep valley. The soil was formed from the sediment that settled out of ancient glacial Lake Agassiz. Several types of clay-like and somewhat sandy soil are found in the Red River Valley, but there are very few rocks. The very productive clay soil tends to hold moisture and become sticky when wet. Residents of the Valley refer to this soil as gumbo and warn people not to drive on rain-soaked dirt roads because they will become stuck in the mud. The Valley occupies the part of the state that is lowest in elevation. Grand Forks has an elevation of 824 feet and Fargo sits at 904 feet above sea level. 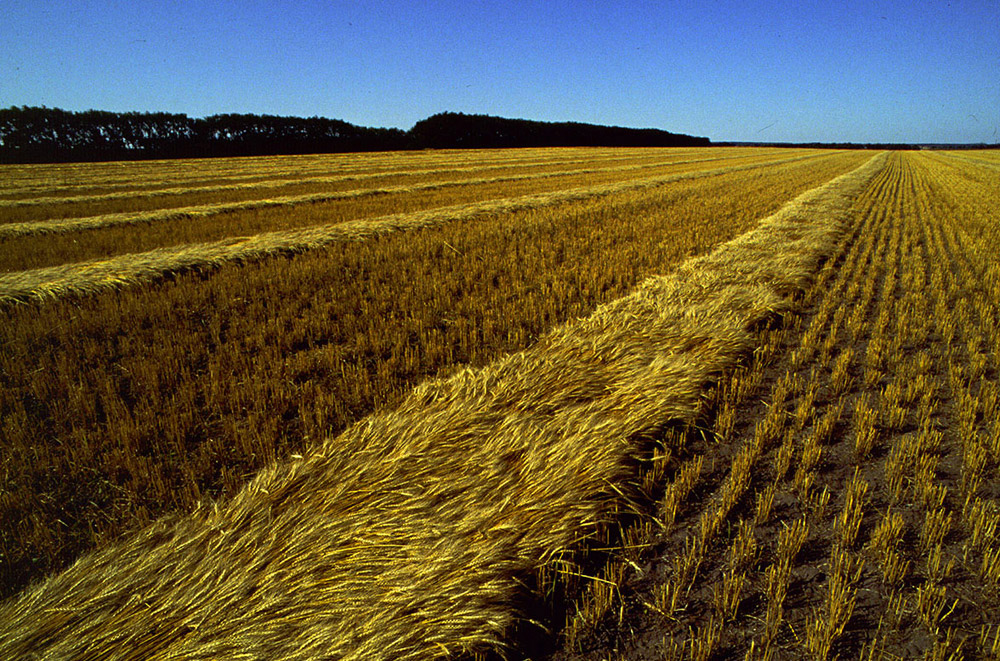 Image 1: The Red River Valley is the most eastern region of North Dakota. The valley is broad and flat rather than deeply cut like many older river valleys. The Valley has few trees except by the edge of creeks and rivers. The trees in this photo were planted to protect the soil from wind erosion. SHSND 3214.

Image 2: The Hair Hills are known today as the Pembina Hills. They form an escarpment or steep rise that marks the edge of ancient Lake Agassiz in the northern end of the Red River Valley. SHSND Hair Hills.

The middle region of the state is called the Drift Prairie. It lies between the Red River Valley and the Missouri Escarpment. The escarpment is a rocky rise formed by an ice sheet millions of years ago. The Missouri Escarpment lies south of the Souris (Mouse) River and west of the James River. The soil of the Drift Prairie is very rocky. Glacial deposits, or drift, composed of rocks of different sizes cover the area. Glacial melt caused small ponds or “potholes” to form. Gently rolling hills surround the potholes. The ponds attract wildlife, especially migratory birds.

The Drift Prairie includes some distinct sub-regions. The Turtle Mountains rise 300 feet above  the northern section of the Drift Prairie. Devils Lake, in the eastern part of the region, is North Dakota’s largest and deepest natural lake. The Sheyenne River delta formed dry sand hills in the southeastern portion of the state. 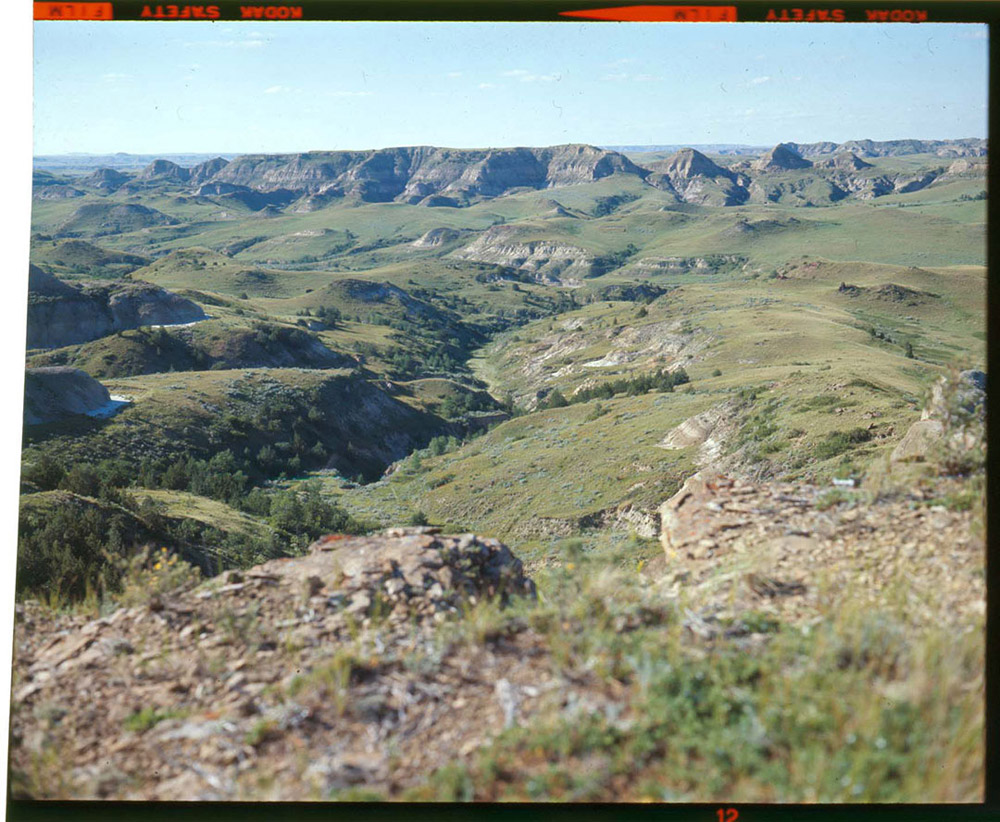 Image 3: The badlands in the western part of the Missouri Plateau are deeply eroded and rocky. SHSND Series 31743-TC773 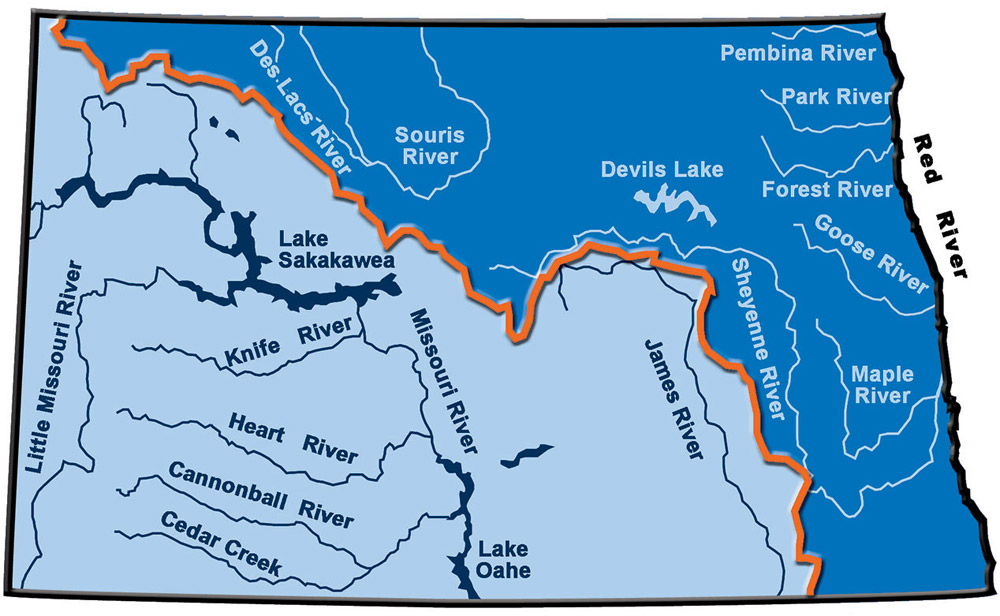 Map 2: The Continental Divide (orange line) forces the James River to flow south toward the Mississippi River. A few miles away, the headwaters of the Sheyenne River lie east of the divide. The Sheyenne runs north to the Red River and on to Hudson Bay. Map by Cassie Theurer.

On the western edge of the Missouri Plateau are the badlands. (See Image 3.) This area was not glaciated, so it was not flattened as parts of eastern North Dakota were. In addition, there are none of the gentle hills and ponds that are found where glaciers dropped deposits of soil and rocks. The badlands were shaped by wind and water. These natural forces removed overlying sediment to expose rocky formations. Beneath the surface of the Missouri Plateau lie deposits of lignite coal.

A major geographic feature of North Dakota is the Continental Divide. (See Map 2.) A continental divide is a rise of ground that separates the flow of rivers. North America has several divides. The highest and best known of these is the Great Divide along the crest of the Rocky Mountains. The Great Divide sends water flowing west to the Pacific Ocean, or east to the Mississippi River. The Continental Divide of North Dakota runs from the northwestern corner to the south-central border of the state. The divide makes rivers and creeks flow south or north. Though the headwaters of the James and Sheyenne Rivers rise only a few miles apart, the Continental Divide sends the James south to the Missouri River (in South Dakota) and the Sheyenne north where it joins the Red River on its way to Hudson Bay.

Why is this important?  Understanding these large geographical divisions helps us understand how economies developed in North Dakota. The potholes were a good water source for animals which drew the attention of bison hunters. Fur traders and trappers looked for the rivers and creeks where shrubs and trees provided habitat for beavers and other fur-bearing animals. Soldiers and explorers looked for land that was suitable for farming and industry. They noted that the rocky, hilly soil of the Drift Prairie was not as appealing as the fertile, flat, treeless soils of the Red River Valley.