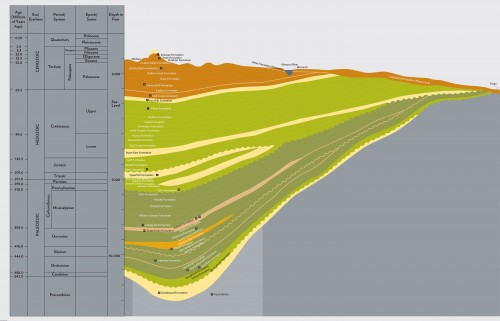 Image 1: Williston Basin Stratigraphy. On the left side of this cut-away image of North Dakota’s geological layers is a chart indicating years each layer represents. A geologist reads this chart like a calendar. The larger periods are called Eras. The next smaller divisions of the eras are called Periods. The periods are divided into Epochs. Several formations might have been deposited in one epoch. The far left hand column tells us when these geological events took place (millions of years ago or Before Present Era.) There is also a column describing how deep you would have to dig to encounter a particular formation. The black boxes with numbers represent a core sample. The deepest core sample on the chart is more than 9,000 feet deep. These core samples are stored at the Wilson M. Laird Core Sample Library. You can see portions of these core samples at the Heritage Center Museum in Bismarck. North Dakota Geological Survey.

Geologic time has divisions that can be compared to our modern calendars which are based on the movement of the sun and earth through space.  We use calendars of years, months, weeks and days.

Geologic time is arranged in units called Eras, Periods, and Epochs.  The longest unit is Era which is made up of several Periods.  Periods are made up of several Epochs.  Within the Epochs are the Formations.  The biggest difference between the geologic time and ordinary calendars is that geologic time is less regular than calendars. The Paleozoic Era has seven periods and its epochs have not been defined. On the other hand, the Cenozoic Era has two periods and seven epochs. Another difference is that in geologic time, time is measured by layers of rock buried deep under the surface of the earth, rather than the movement of earth in space. The geologic calendar is not as neat as the astronomical calendar, but it has the same purpose of organizing time into recognizable units. (See Image 1.)

There are four Eras. Each Era is characterized by geological changes brought about by water, wind, earthquakes, or volcanoes and by the development of plant and animal life. Charts of the layers that constitute these Eras are called stratigraphic columns. A stratigraphic column for all of Earth covers about 5 billion years. A useful stratigraphic column for North Dakota covers about 600 million years before the present (Before Present Era or BPE). Though North Dakota is every bit as old as the rest of the world, the entire geologic history has not yet been discovered. We need to remember that our knowledge of geology, plants, and animals of the distant past is constantly changing as new knowledge is added. 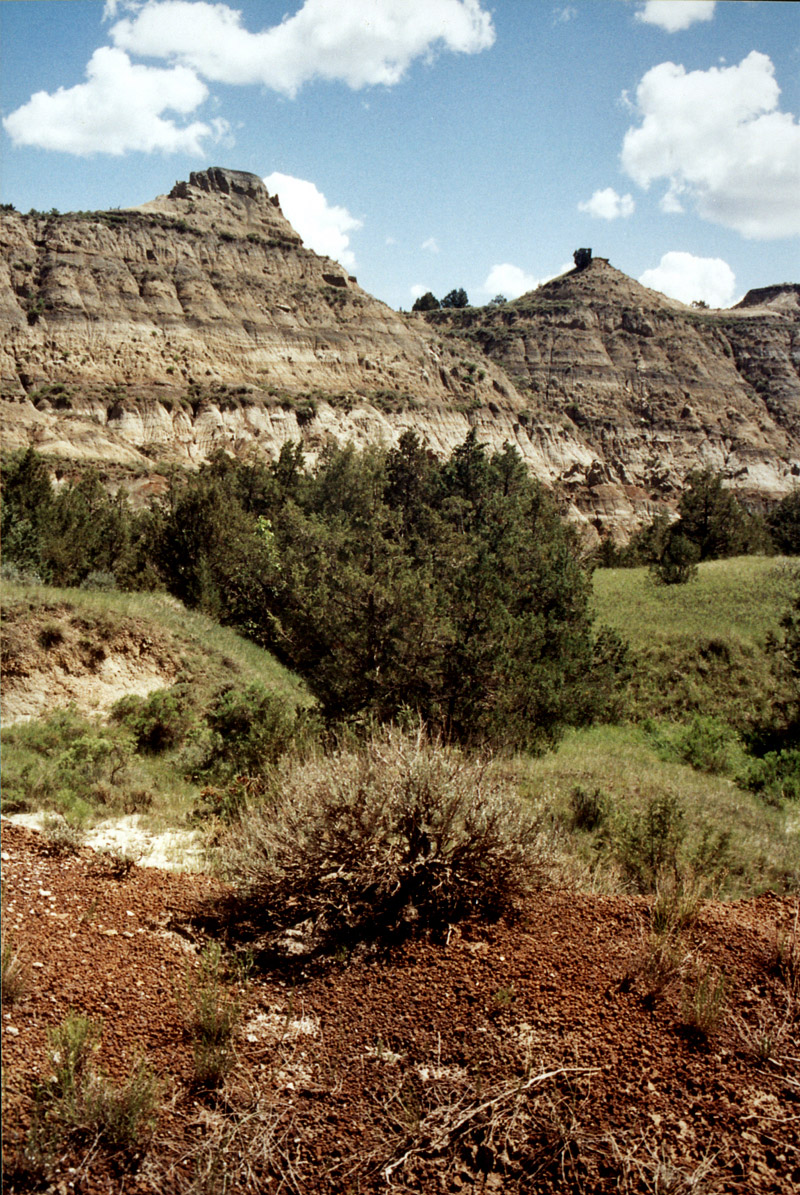 Image 2: Badlands 1. The North Dakota Badlands are a good place to view geologic formations. Only a couple of formations appear in the badlands landscape, but we can see how neatly the formations were laid down by erosion or by sediments settling to the bottom of an ancient sea. Each layer can be identified by the type of rock that it contains. These rocks are of different colors giving the badlands a striped appearance. Courtesy North Dakota Geological Survey.

North Dakota’s geologic record becomes clear in the Paleozoic Era, the second of the four eras. The Paleozoic started about 570 million years ago. Over the next 500 million years, seas flowed into North Dakota and drained away several times. North Dakota’s defining geologic feature, the Williston Basin, formed along a crack in the earth’s crust. Plant and animal life expanded in variety and became more complex. Some species evolved and some species became extinct. By the time the next era (Mesozoic Era) had passed and the current era (Cenozoic Era) had begun, mammals had become the dominant form of animal life and grasses developed to live alongside trees and flowering plants. North Dakota’s coal deposits were formed. The climate changed from hot to warm and humid, to very cold.  Slowly, the climate of North Dakota took on the familiar pattern of cold winters and warm summers.

We know all of these things because of the layers of rocks that were laid down by the processes of wind or water erosion that brought silt, rocks, and sand into the seas and deltas of North Dakota. (See Image 2.) A geologist or a paleontologist reads these layers as though reviewing the family calendar. Each layer tells of ancient processes that made the landscape and preserves a record of the non-human life forms that inhabited it.

The information in this lesson is based on research conducted by scientists during the last 200 years. Paleontological knowledge changes continually as new research brings more information to light. Even though North Dakota did not exist in the ancient past, we will use that term, and other modern names, to define the area of our study.

Why is this important? Geologic time helps us understand the processes of evolution, the origins of Earth, and how North Dakota (and the rest of the world) was formed. The layers of rocky sediment lying below the surface (and sometimes exposed) represent events that took place over time. Understanding these events gives us perspective on our place in the universe as well as more practical information such as where to look for coal and oil. Learning this concept of time is difficult, but it explains why the badlands are so different from the Red River Valley. Each was created in a different Epoch and by different geologic events. This history is written in stone.