Section 2: End of the NPL

The Nonpartisan League made great changes in the laws and politics of North Dakota. However, the Bank of North Dakota, the State Mill and Elevator, and other programs led outsiders to think that North Dakota had been taken over by socialists. During World War I (1917-1918), anti-war speeches by some NPL leaders raised questions about the state’s patriotism. Though the NPL could claim some successes in its programs, it came under attack by businessmen and politicians all over the country.

Before the election of 1920, the North Dakota opponents of the Nonpartisan League (NPL) had organized as the Independent Voters Association (IVA). The IVA waged a strong campaign against the NPL candidates through both the Republican Party and the Democratic Party. Nevertheless, the League won all major offices in the state. Lynn Frazier (See Image 3) was re-elected to his third term as governor. Edwin Ladd, former chemistry professor and president of North Dakota Agricultural College, was elected to the U.S. Senate. Other League candidates, however, lost their campaign for office, and for those successful League candidates, the margins of victory were smaller than in previous years. 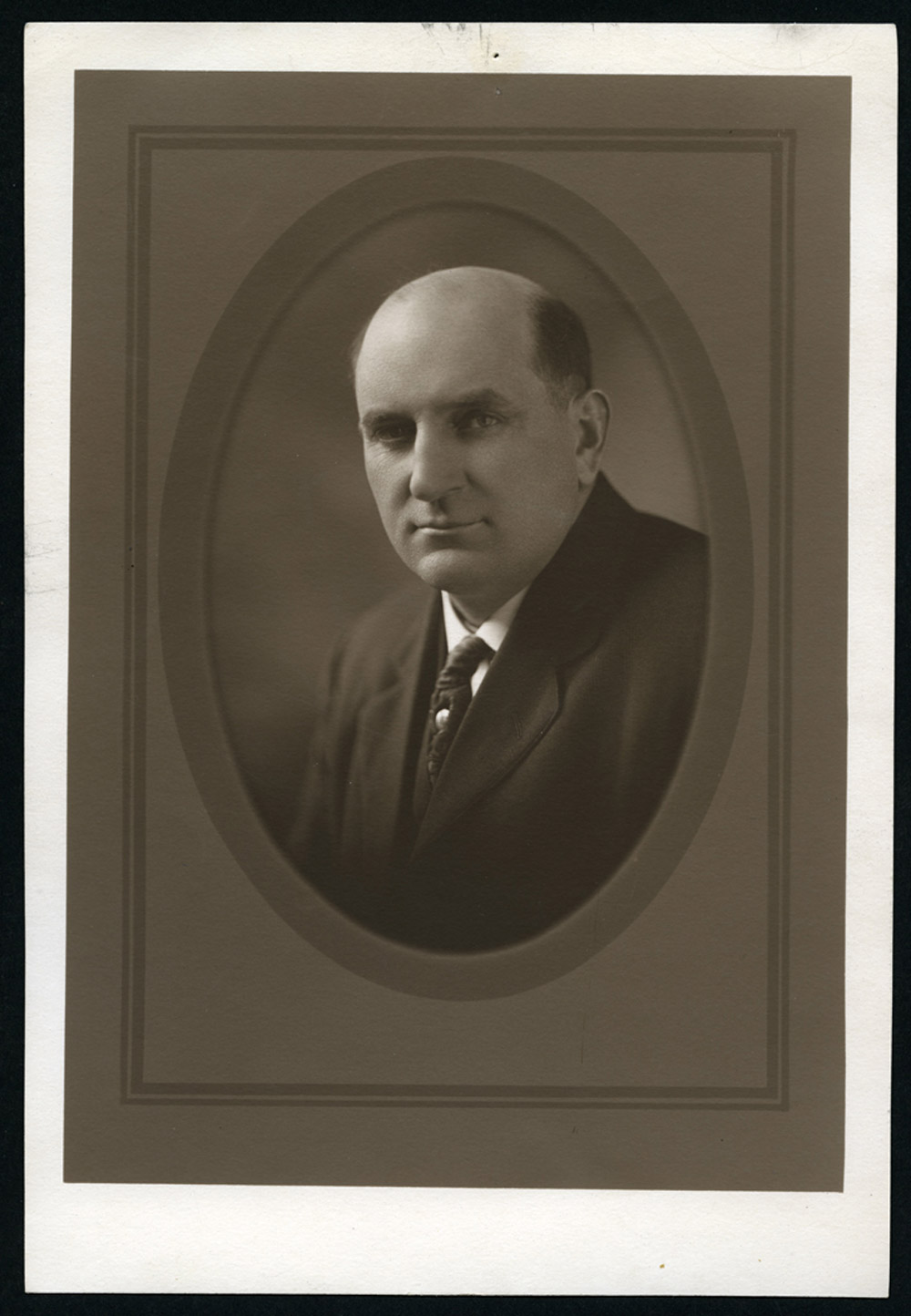 Image 3: Lynn Frazier was a farmer from Hoople when he was chosen in 1916 to run for governor as a member of the Nonpartisan League. The Independent Voters Association (IVA) opposed the programs of the NPL. In 1921, after Frazier was re-elected the IVA petitioned the state to hold a recall election. Frazier and two other state officials were turned out of office. SHSND C0279-0002.

Other problems challenged the League’s political power. Some important NPL officials had left the organization. Attorney General William Langer was the most popular and powerful of the politicians who turned against the League. Langer ran against Frazier for governor in 1920. Though Langer lost the election, he had become a powerful voice against the League.

The NPL had expanded into business which cost the organization popular support. Some NPL leaders formed the League Exchange which purchased the Scandinavian American Bank of Fargo and several other banks. The Exchange also bought several newspapers, including the Fargo Courier-News, and organized a chain of stores. It appeared that the League was taking the place of the big businesses it had campaigned against.

League officials were also accused of corruption and illegal activities. William Lemke, a League lawyer, manipulated state funds to pay for a $20,000 ($230,000 today) house for his family when the average home cost about $3,000. A.C. Townley, one of the founders of the League (but not an elected official,) had been convicted in 1919 for conspiring to obstruct the military draft during the war.

Ironically, the League itself contributed to its end by passing an amendment to the North Dakota constitution which allowed for the recall of state, county, congressional, judicial, or legislative officials. The amendment was approved by a wide margin of voters in the March 1920 presidential primary election. (See Document 1.) Recall requires that at least 30 per cent of the voters who voted in the previous election sign a petition asking for a special election. The election must be held 40 to 45 days after the petition is filed. 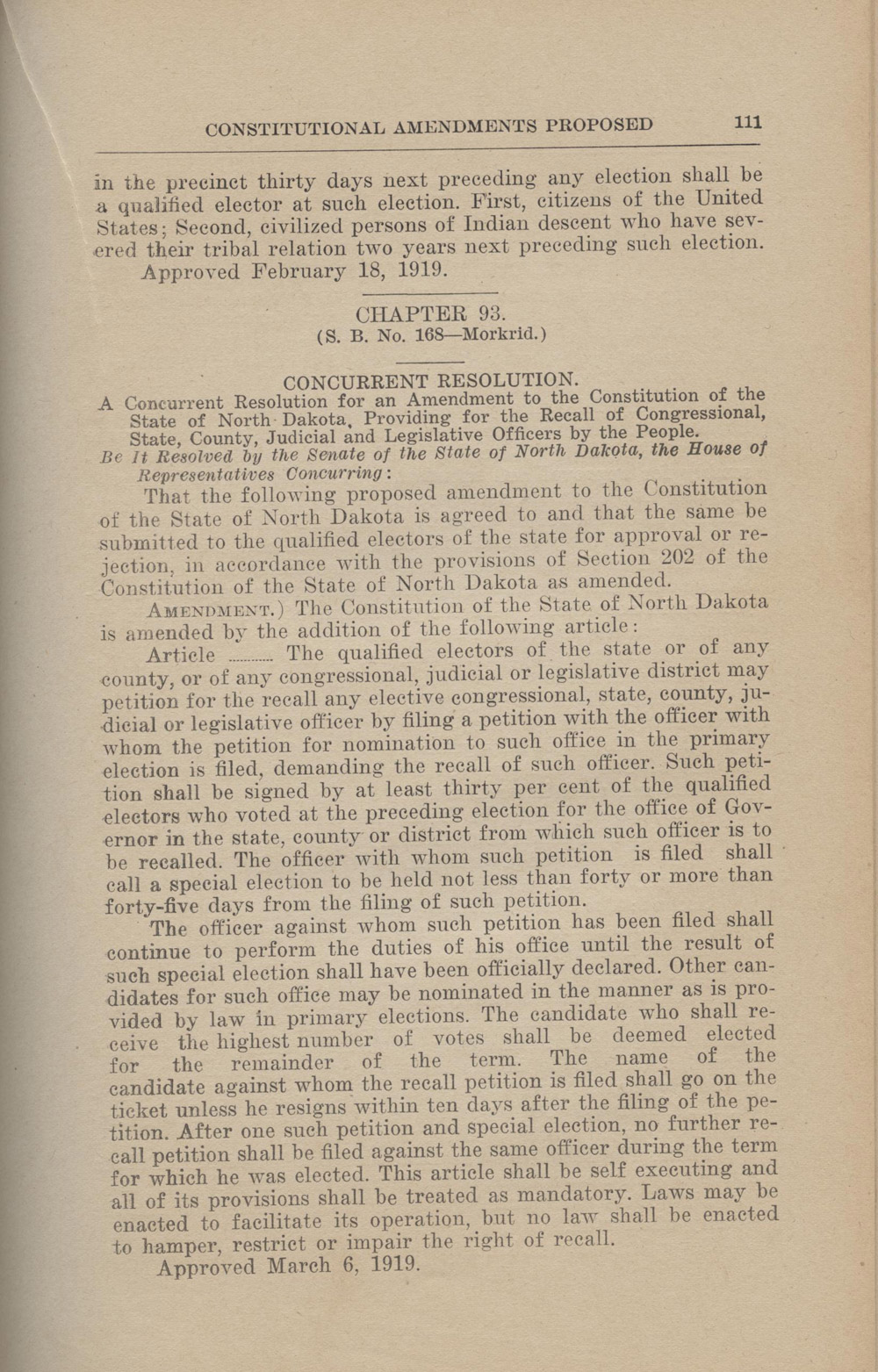 Document 1: In 1919, the legislature passed a bill allowing for recall elections at every level of government. In 1920, recall was used to remove Governor Lynn Frazier, Attorney General William Lemke, and Commissioner of Agriculture John Hagan from office. They were replaced by candidates chosen by the Independent Voters Association. Laws of North Dakota 1919.

In 1921, recall petitions were filed against Governor Frazier, Attorney General William Lemke, and Commissioner of Agriculture John N. Hagan. On October 28, voters turned the three League officials out of office in a close vote. Ragnvald Nestos, the IVA candidate, was elected governor. The NPL delayed the change of leadership when it argued that the election was not conducted legally. However, the North Dakota Supreme Court declared the election valid. Nestos was sworn in as governor on November 23, 1921.

The NPL was weakened, but Leaguers remained active in the Republican Party until the 1940s. Many of the reforms initiated by the NPL remained in place because the voters continued to support the state-owned bank and state-owned mill and elevator. As the Nonpartisan League lost its leadership in North Dakota politics, the Democratic and Republican parties struggled to establish viable programs and political philosophy.

Why is this important? The Nonpartisan League’s ideas and methods were often useful in the political and economic environment of North Dakota. Voters confirmed their approval of the programs in the special election of 1921. Yet, the League was often too far from mainstream American political thinking to find acceptance. The NPL’s ideas about the role of state government caused people outside of North Dakota to view the state with suspicion. The IVA campaign against the League and the League’s own mistakes turned the voters against the League. Though the Nonpartisan League was discredited in 1921, the NPL left an impression on North Dakota politics and institutions that time has not erased.