Section 3: The CCC and the WPA

President Franklin Roosevelt established many programs to end the suffering of the Great Depression and help people get jobs. (See Image 8.) Two of these programs were important in North Dakota. The Civilian Conservation Corps (CCC) and the Works Progress Administration (WPA) employed men to build roads, parks, dams, and buildings. (See Document 2.) 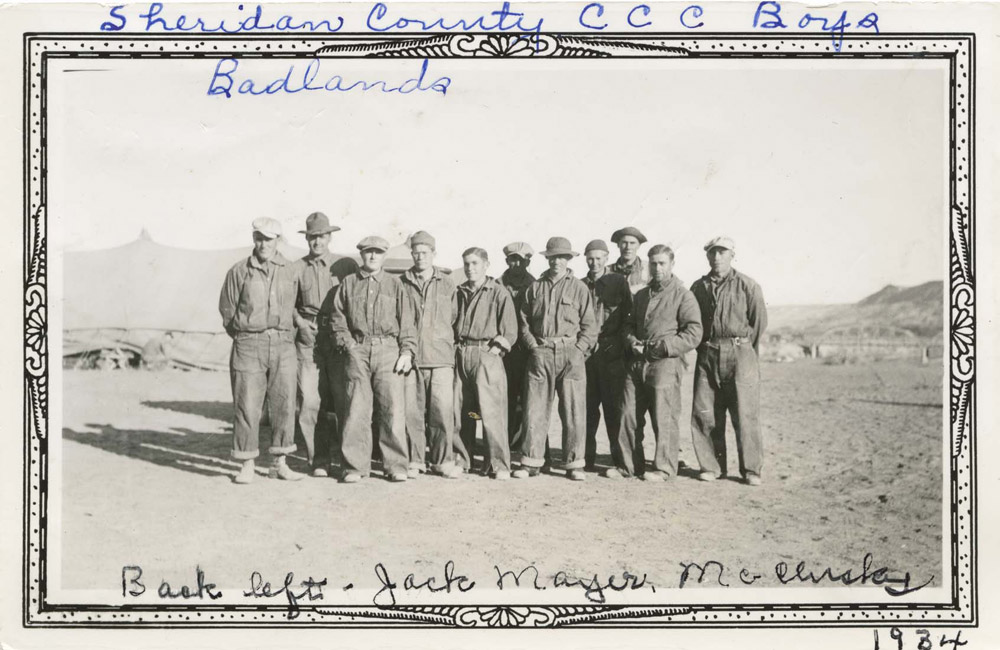 Image 9: The CCC, a program to put young men to work in the 1930s, was run in a military fashion. The workers were assigned to a Company which was led by a military officer. Men lived in military tents until permanent quarters were built. These young men from Sheridan County signed up to serve in the CCC together. SHSND 10648-file8-05 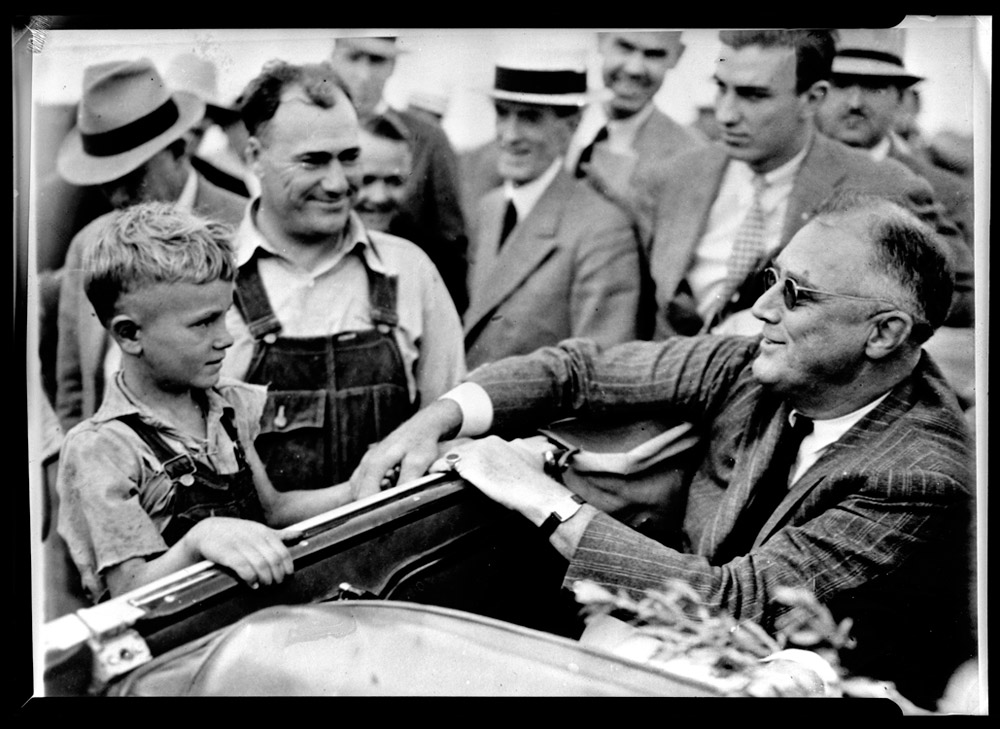 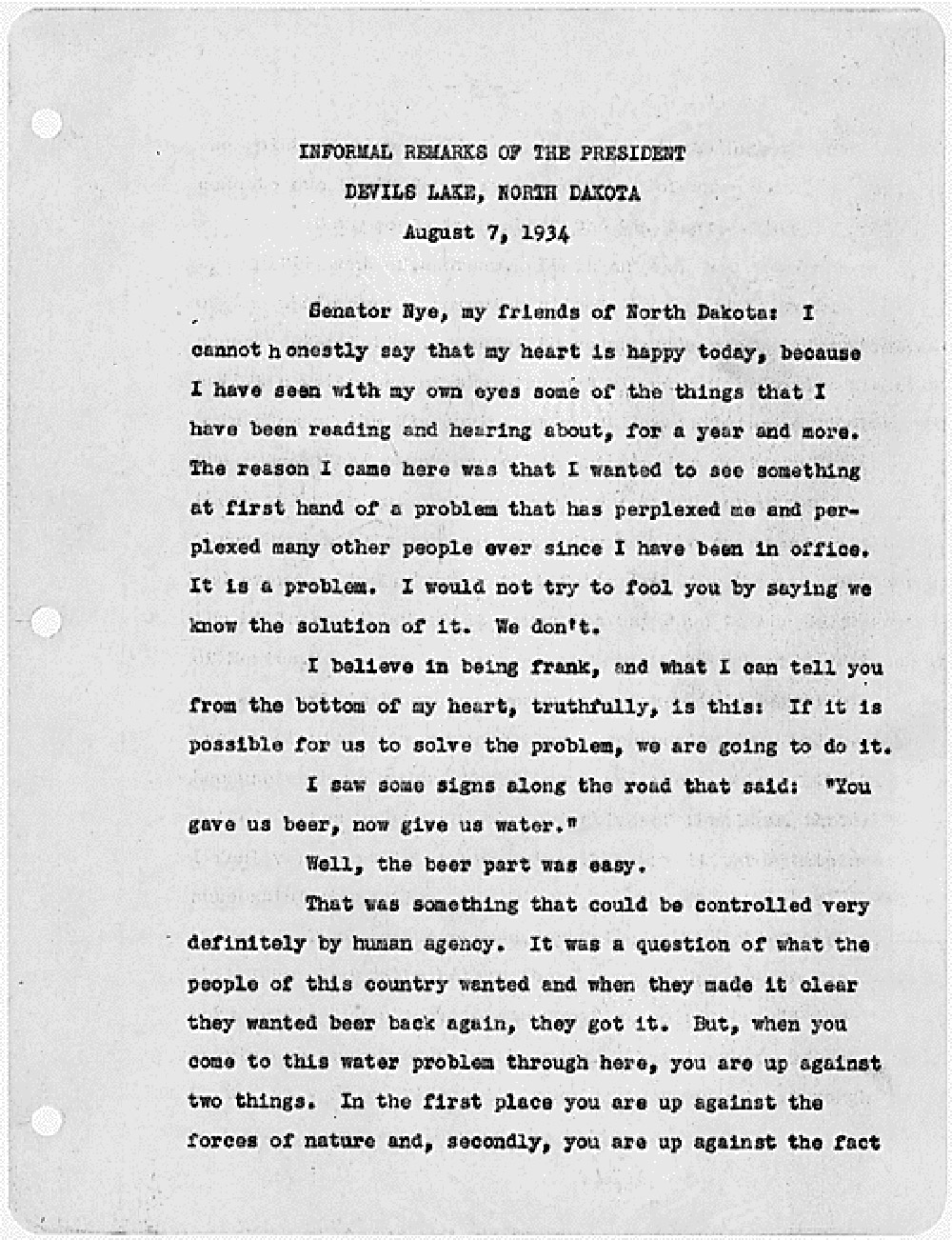 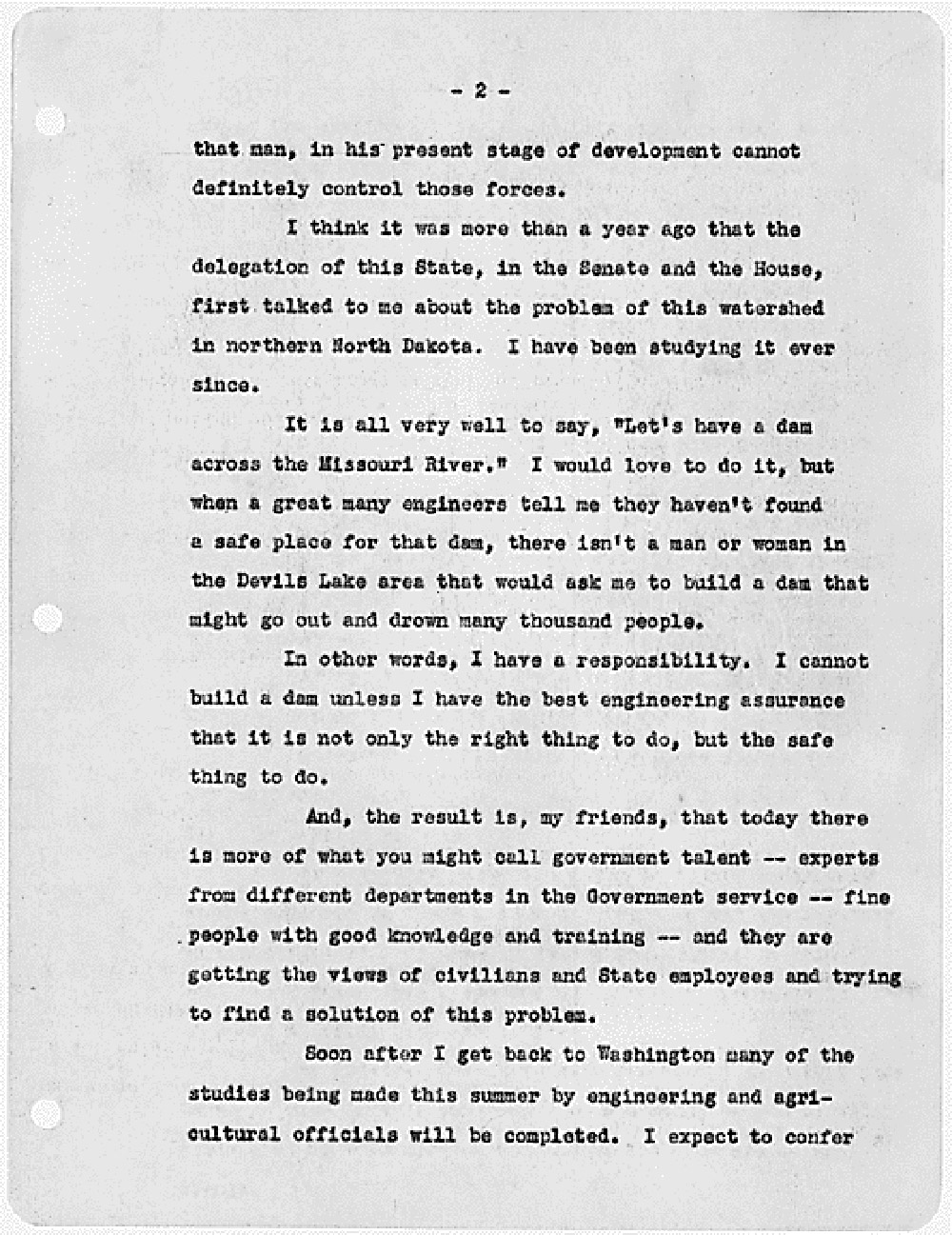 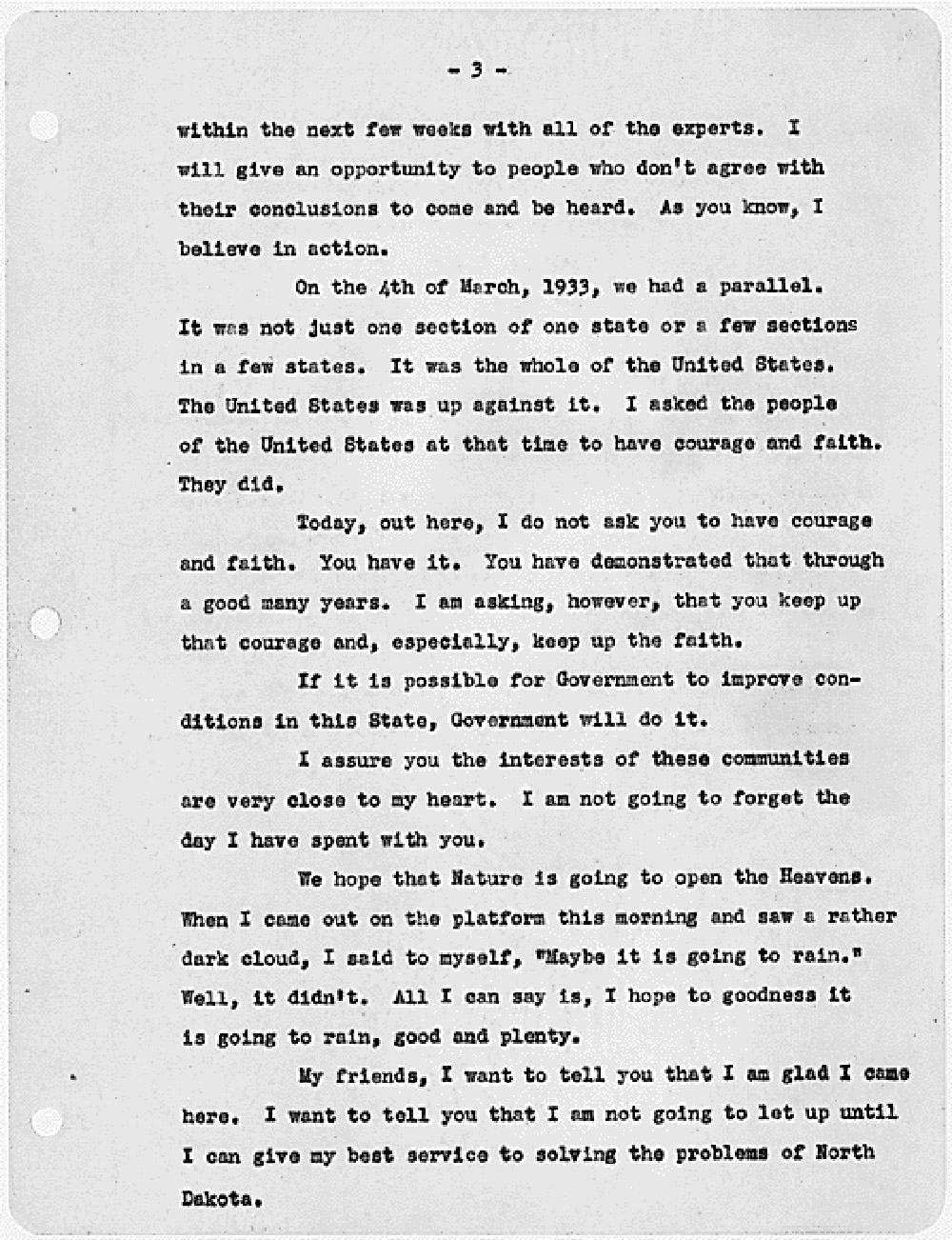 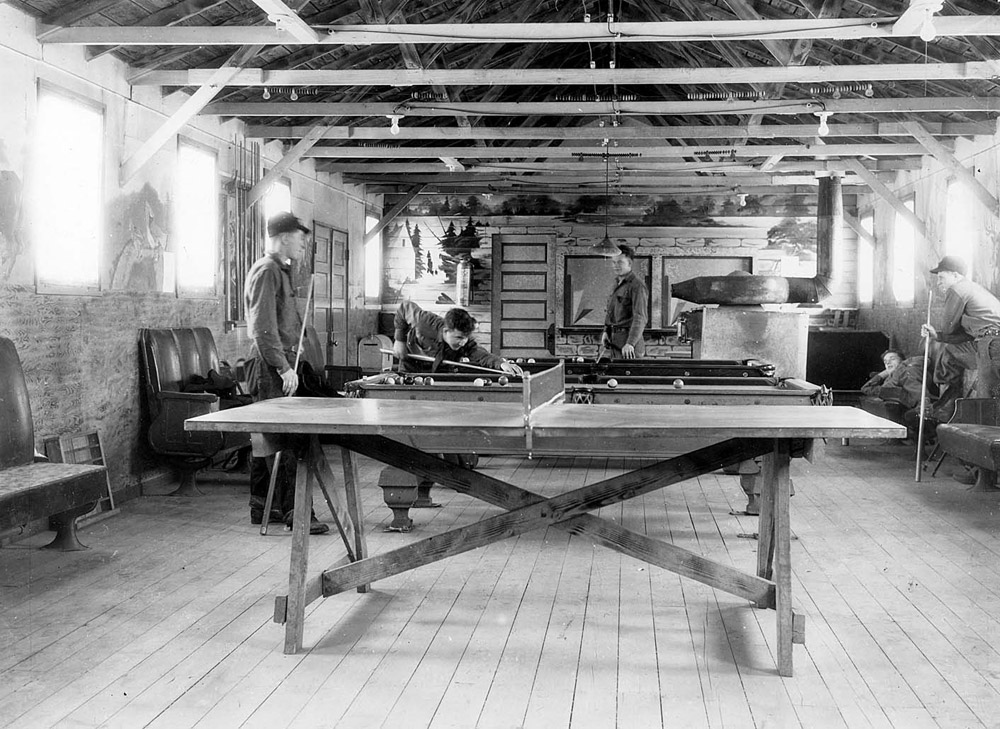 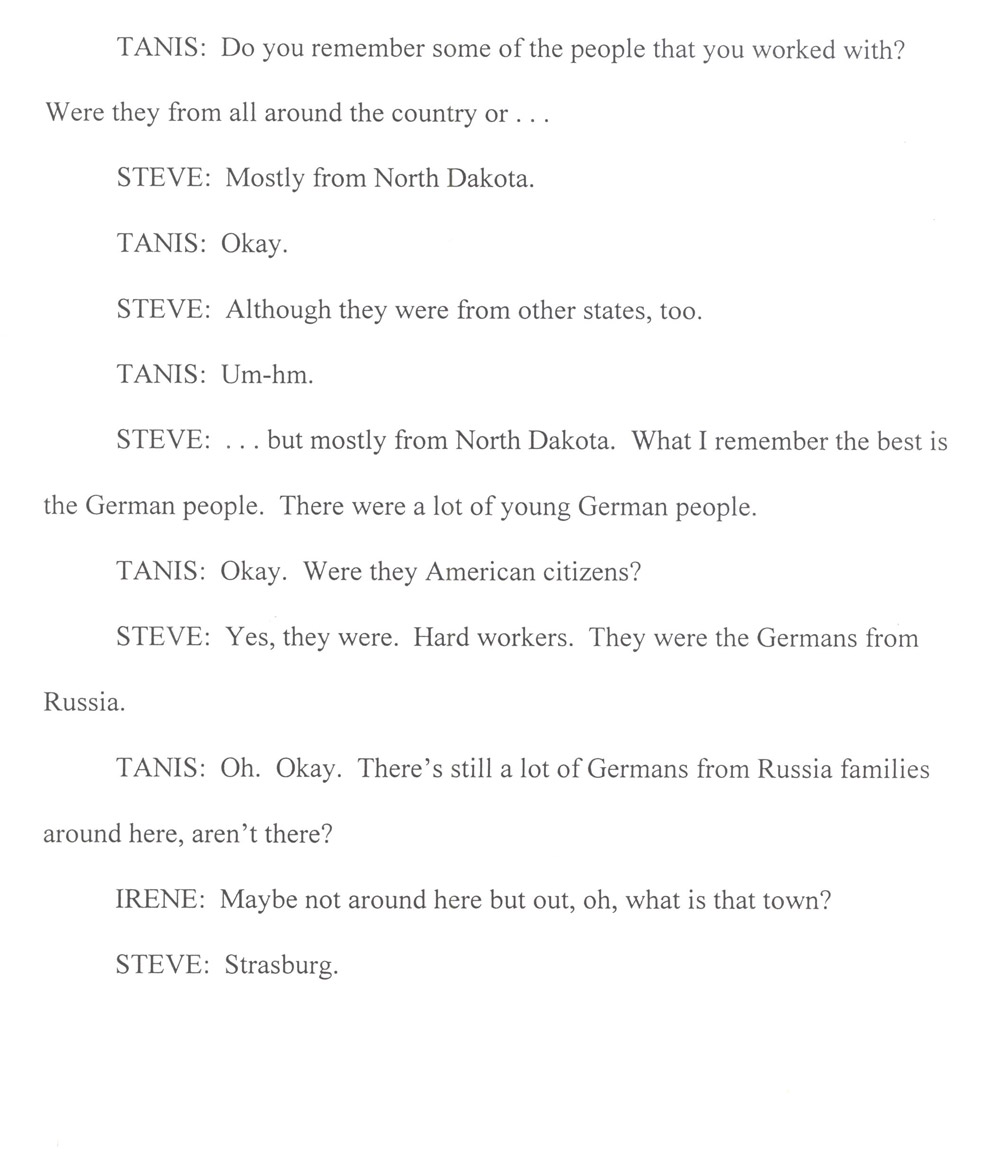 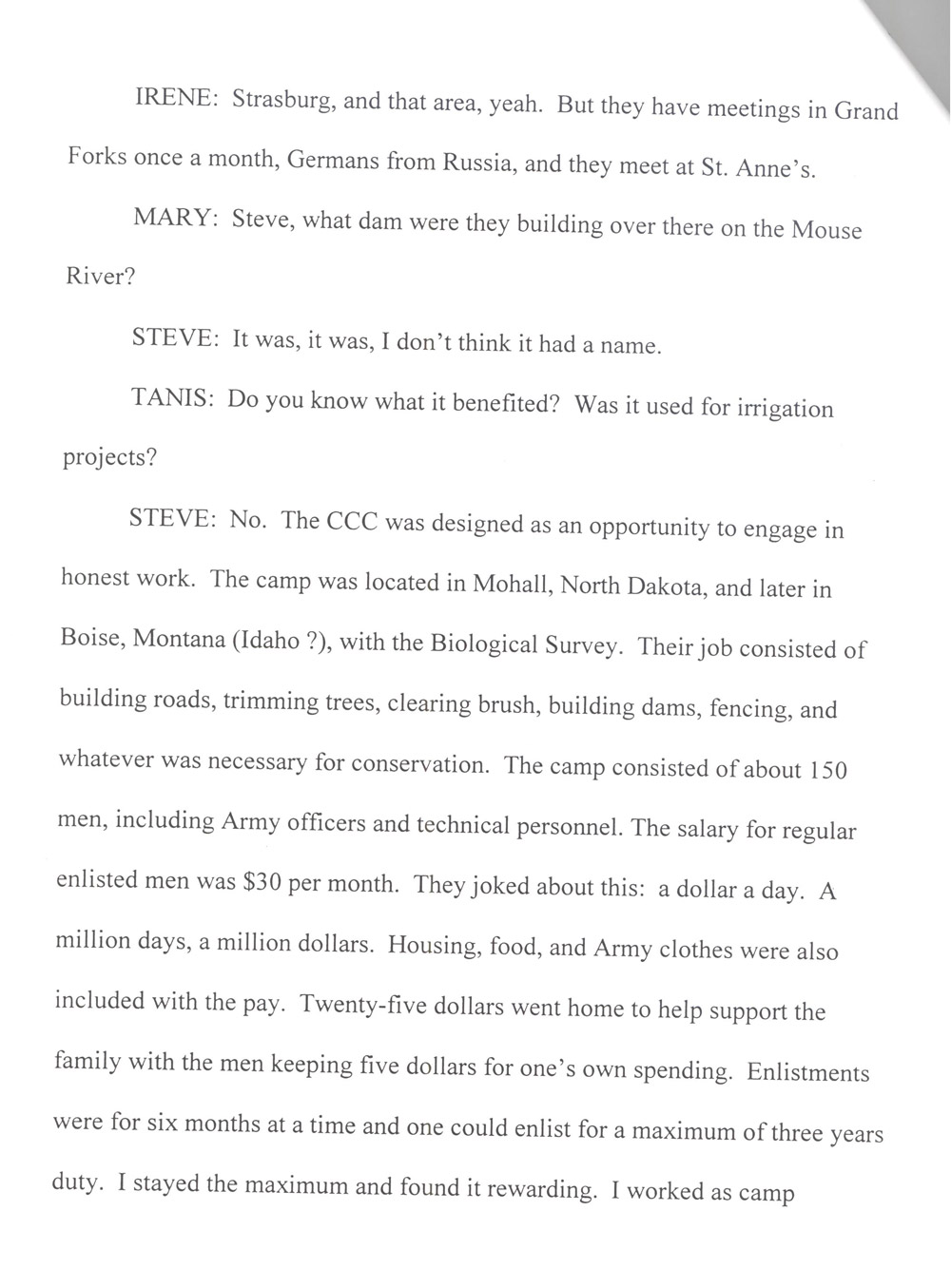 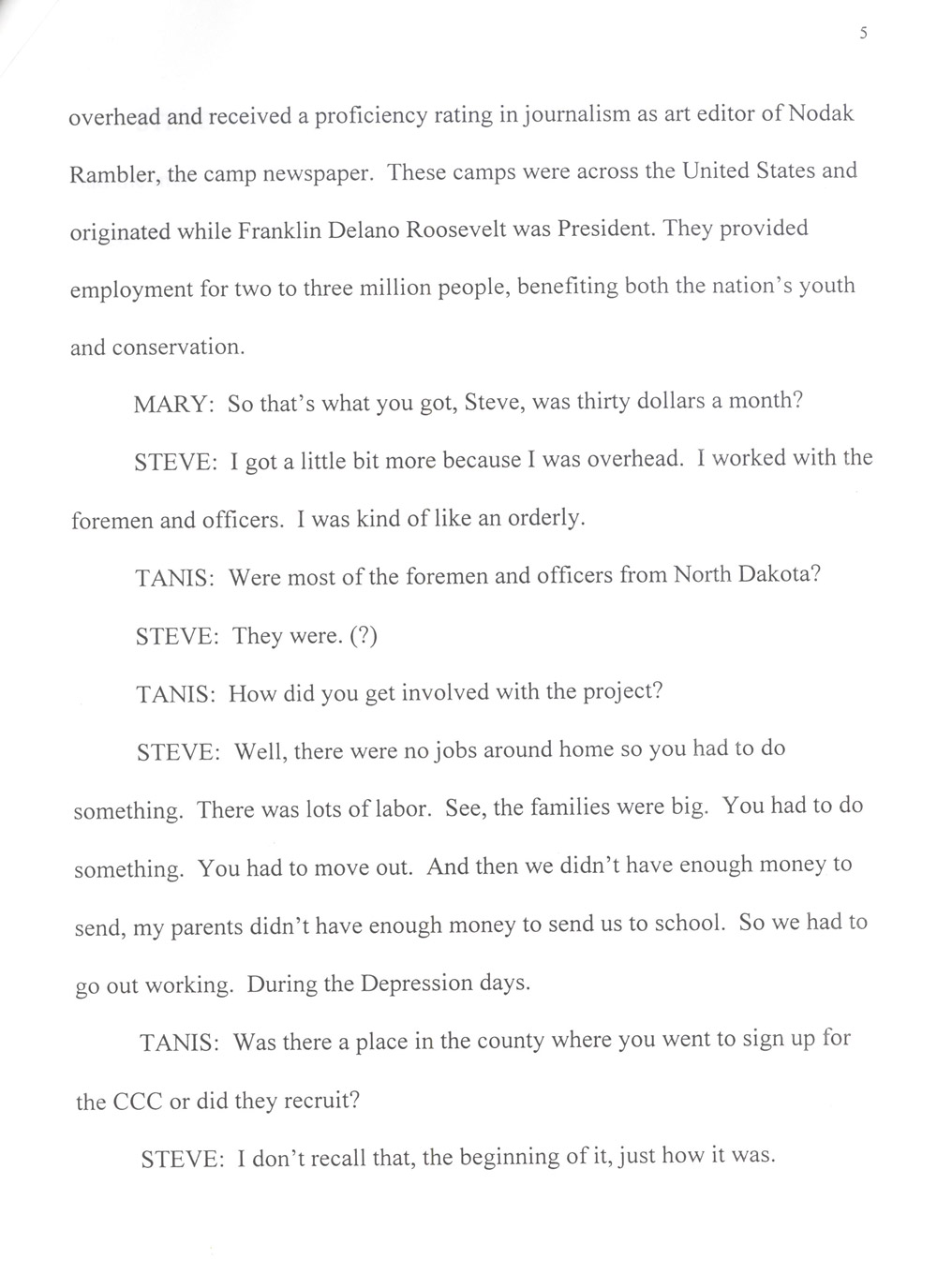 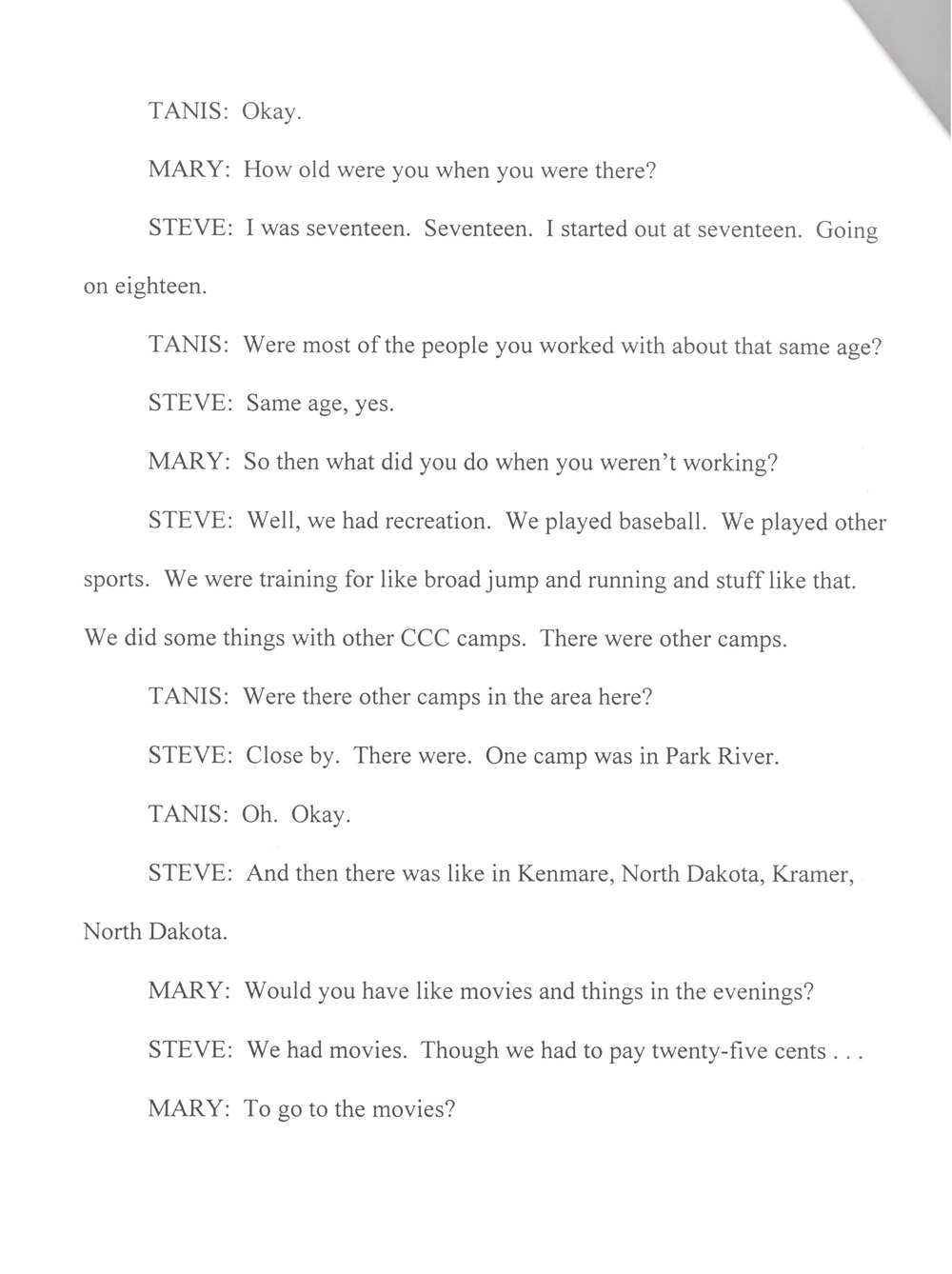 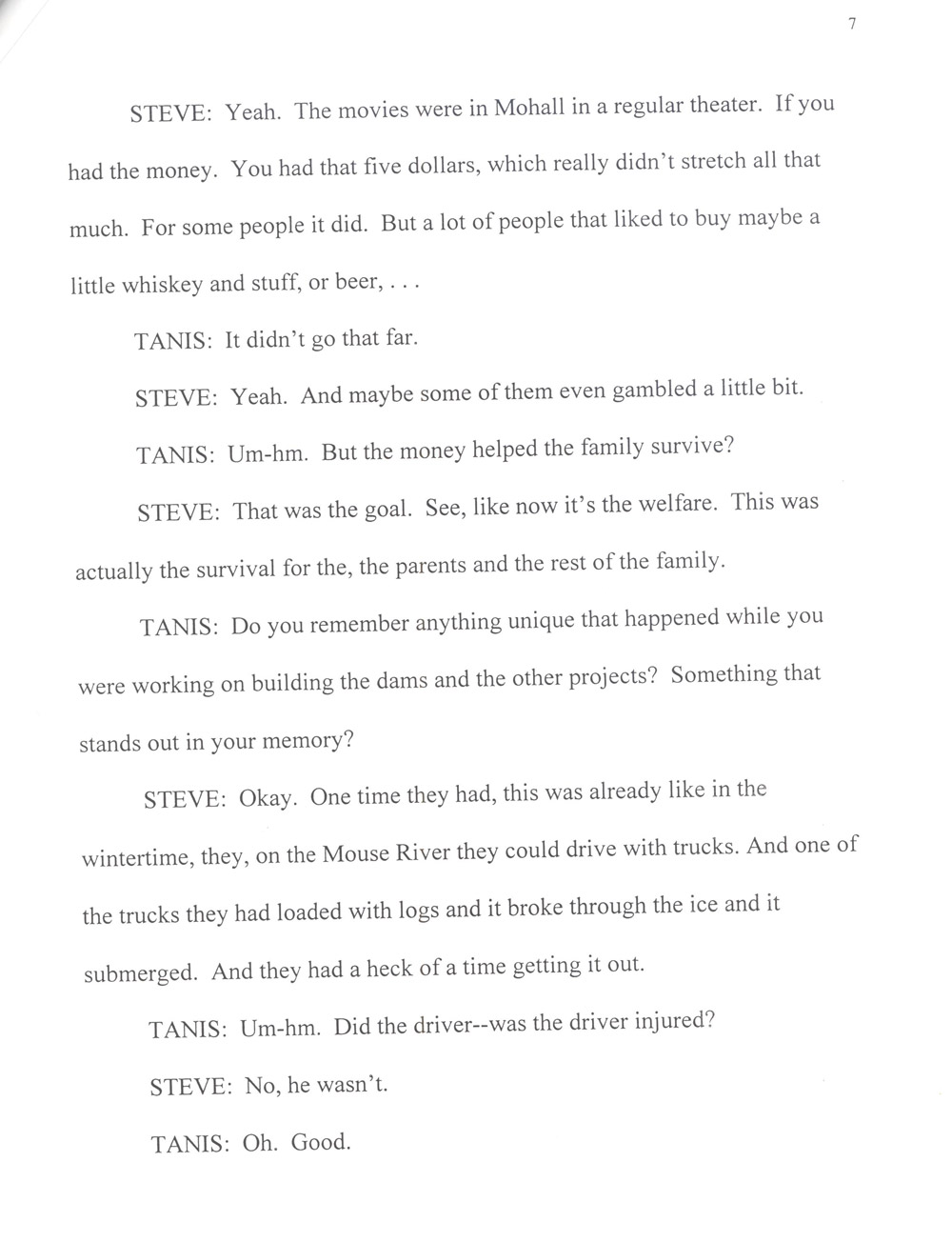 The CCC was a program for young, unmarried men. (See Image 9.) They could enlist and stay in for a few months or several years. They were paid $30 per month and received uniforms, food, room, medical care, and schooling. In addition, they were trained in construction. Of the $30 per month salary, $25 was sent home to their families. The program helped families in two ways. One member of the family no longer needed food, clothing, and medical care. The rest of the family had more food and other resources to share. The family also received $25 each month to help with their expenses. The young men in the CCC did not have to spend much money other than for stamps (to write home) and a little entertainment. (See Image 10.)

In North Dakota, the CCC built Turtle River State Park (Grand Forks County), Theodore Roosevelt Park (now Theodore Roosevelt National Park), and many structures in the Peace Garden. They also built dams, city parks, and did some conservation work on farms. Some units of North Dakota CCCs were sent to other states where they did similar work. (See Document 3.)

The CCC was run in a military fashion. Some of the leaders in the camps where the CCC boys lived were military officers. The CCC helped to prepare young men for military service a few years later during World War II (1941-1945). The CCC, like the National Youth Administration, was designed to keep young men occupied. Some people were concerned that young men who could not find a job would turn to crime or become permanently unemployed. Many men who spent time in the CCC have very fond memories of the friendships they formed in the CCC camps. CCC men took pride in their work and learned skills that would serve the men well years later. In addition, some young men were able to finish their high school education in the CCC classrooms. 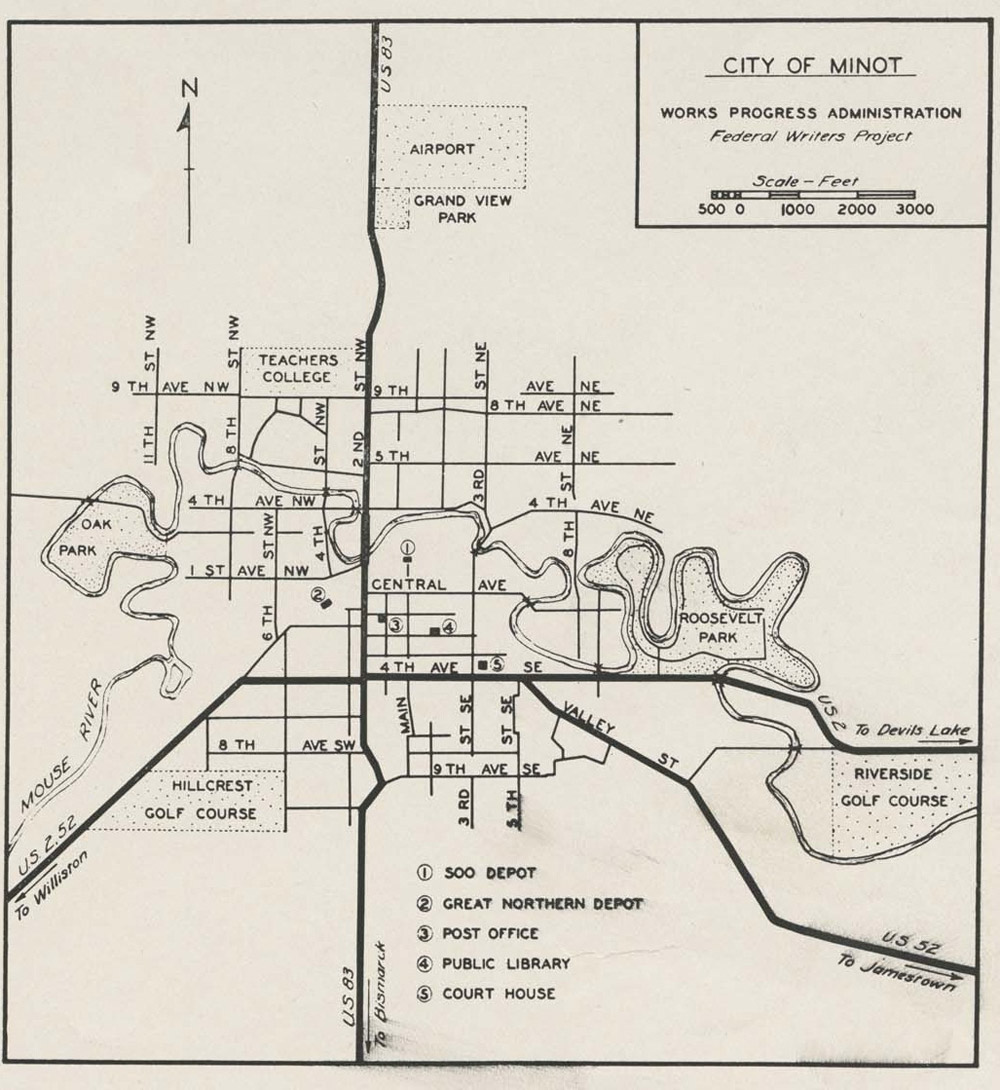 Image 12: WPA workers were employed on writing projects to record the history of pioneers and information about North Dakota. This map of Minot was made by WPA workers. The Teachers College is now Minot State University. The State Fairgrounds had not yet been built. SHSND 0649-02.

The CCC employed American Indian men in the Indian Emergency Conservation Work (IECW). The IECW was also called the CCC-ID. Employees of the IECW did not have to be young or unmarried. The IECW projects were similar to the CCC or WPA projects. They built roads, schools, and dams on or near Indian reservations. Employees were trained to be carpenters, truck drivers, radio operators, mechanics, and surveyors. About one-third of the adult men on the Sioux reservations enrolled in the IECW. 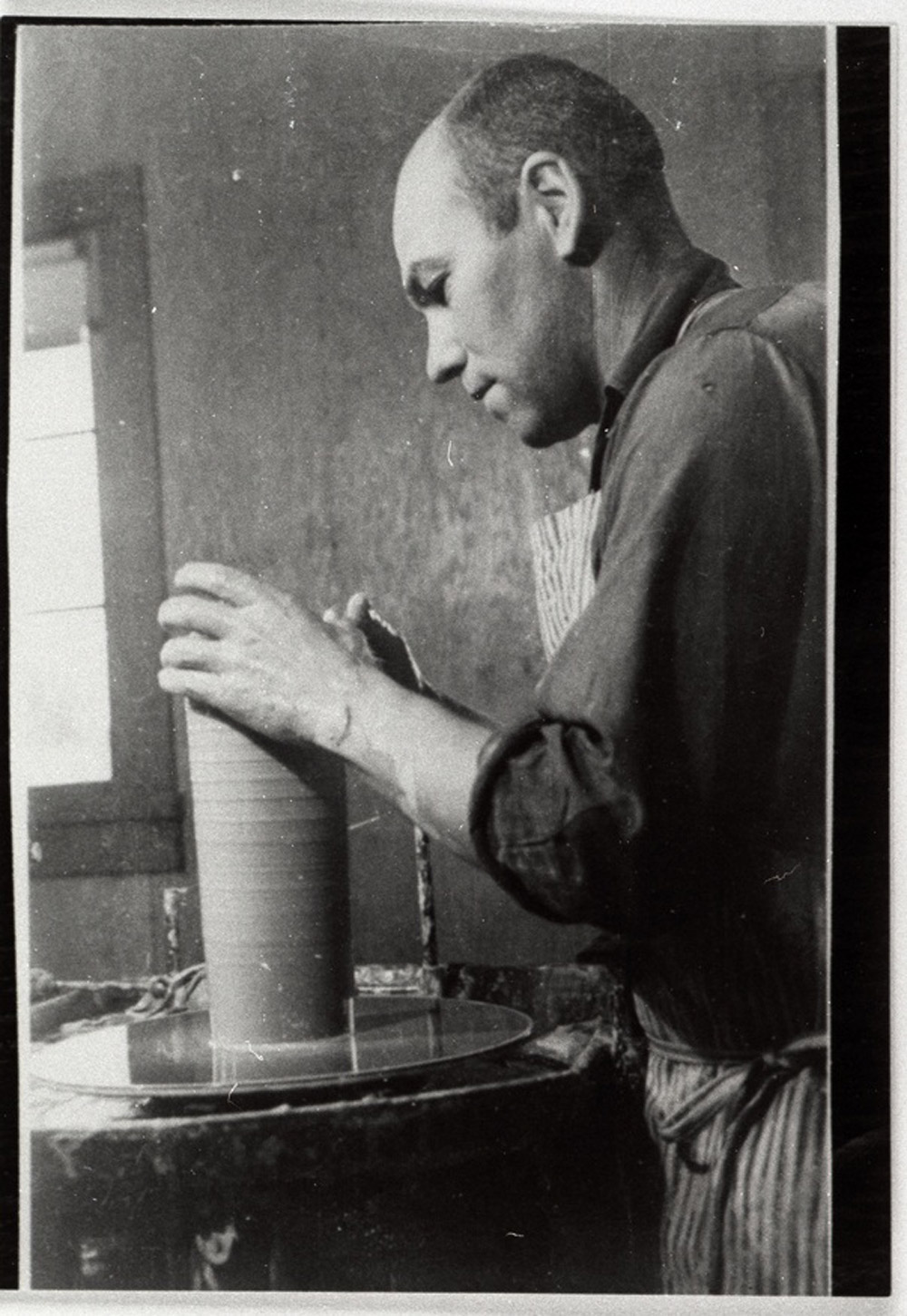 Image 13: North Dakota’s clay soils are perfect for making pottery. WPA workers were employed to make ceramic pots for both practical and decorative purposes. Peter Haag of Mandan made WPA pottery in the 1930s. SHSND 0824-0007.

The WPA hired men to work on local projects. (See Image 11.) These men generally lived at home (there were some dormitory arrangements for men who had no home) and worked on roads, dams, and buildings in their own counties. Many WPA employees were farmers. WPA workers also built structures at Long Lake and Lake Ilo National Wildlife Refuges. The state could not have paid for these projects without federal funds. Many dams, bridges, and the structures at the National Wildlife Refuges that were built by the WPA still stand.

The WPA hired men and women to paint murals in public buildings. Many post offices had large murals across the walls depicting the history of the area. Unfortunately, many of these old post offices have been torn down or re-built and the murals have disappeared. The WPA also employed writers who researched local and state history, interviewed the state’s first pioneers, and compiled various kinds of data about the state. Today, these records provide an invaluable historical record of North Dakota in the 1930s. (See Image 12.) WPA workers were hired to make ceramic dishes and pottery. Today, North Dakota’s WPA pottery is highly valued for its beauty and its historical origins. (See Image 13.)

The WPA and the CCC were often called “make work” programs. Some people called WPA workers lazy. But, these programs put men and women to work in jobs that would not have been accomplished without federal money. The jobs allowed men and women to feel the pride of working and contributing to their state and their families.

Why is this important? Historians have concluded that the WPA and the CCC and other federal programs did little to correct the economic problems of the 1930s. The Great Depression was too big to fix in a few years. However, these jobs did bring some money to families who desperately needed it. The programs also helped men and women develop useful work skills. Most importantly, the people who had CCC or WPA jobs felt useful again. The jobs reduced the terrible hopelessness of the Great Depression.