All towns and cities were built around streets. When a city was originally planned (platted), streets were laid out first. In larger cities such as Fargo or Bismarck, the main streets were paved with bricks or wood blocks, but in small towns the streets were usually just packed dirt. Residents complained about streets in bad condition and poor quality paving. However, residents also complained about having to pay high taxes for road construction. City engineers, contractors, and citizens debated the proper kind of material for paving city streets. Engineers had concerns about how paving materials would hold up to North Dakota’s hot summers and cold winters.

Image 19: In 1905, when this Bismarck driver stopped at the mechanic's shop, cars were not registered, nor required to have license plates. The streets of Bismarck were not paved making them difficult to drive after a rain shower. SHSND 00029-0022

Bismarck, Fargo, Minot, Grand Forks, Devils Lake and other cities began paving their streets around 1910. The process continued for many years. Some city streets were surfaced with gravel and clay, but main streets were usually paved with brick, or bitulithic – a substance similar to modern asphalt. (See Image 19.) Both Fargo and Minot had pre-automobile pavement of wooden blocks that had been treated with creosote. These, of course, were badly damaged when these cities’ streets flooded.

Many towns saw an increase in business and population as automobiles became more popular. Cars took farm families from small market centers to larger cities to shop, to access medical care and other services, and to market their crops. Many rural families bought cars so that they could shop in larger towns. Small towns like Fillmore and Omemee lost business and population as cars swiftly carried farm families to Rugby or Bottineau to shop. (See Image 20.)

Image 20: Cars took people from small towns like Fillmore to large towns for shopping, entertainment, and medical care. Today, Fillmore is a ghost town. SHSND 0032-BE-08-14

With hundreds of local drivers as well as visitors on the highways, Minot needed to control traffic. Early in 1920, the city placed a traffic signal at Main and Central, but drivers did not pay attention to the lights. A second traffic light was installed in 1939, at 4th and north Broadway. Still, drivers had to be cautioned to be patient while waiting for a light to signal their turn to enter the intersection.

Pedestrians also had new lessons to learn about cars on city streets. Careless drivers who hit pedestrians were generally not charged with a crime; it was only an “accident.” However, the old rule about pedestrians having the right-of-way on city streets was about to change. (See Document 8.) 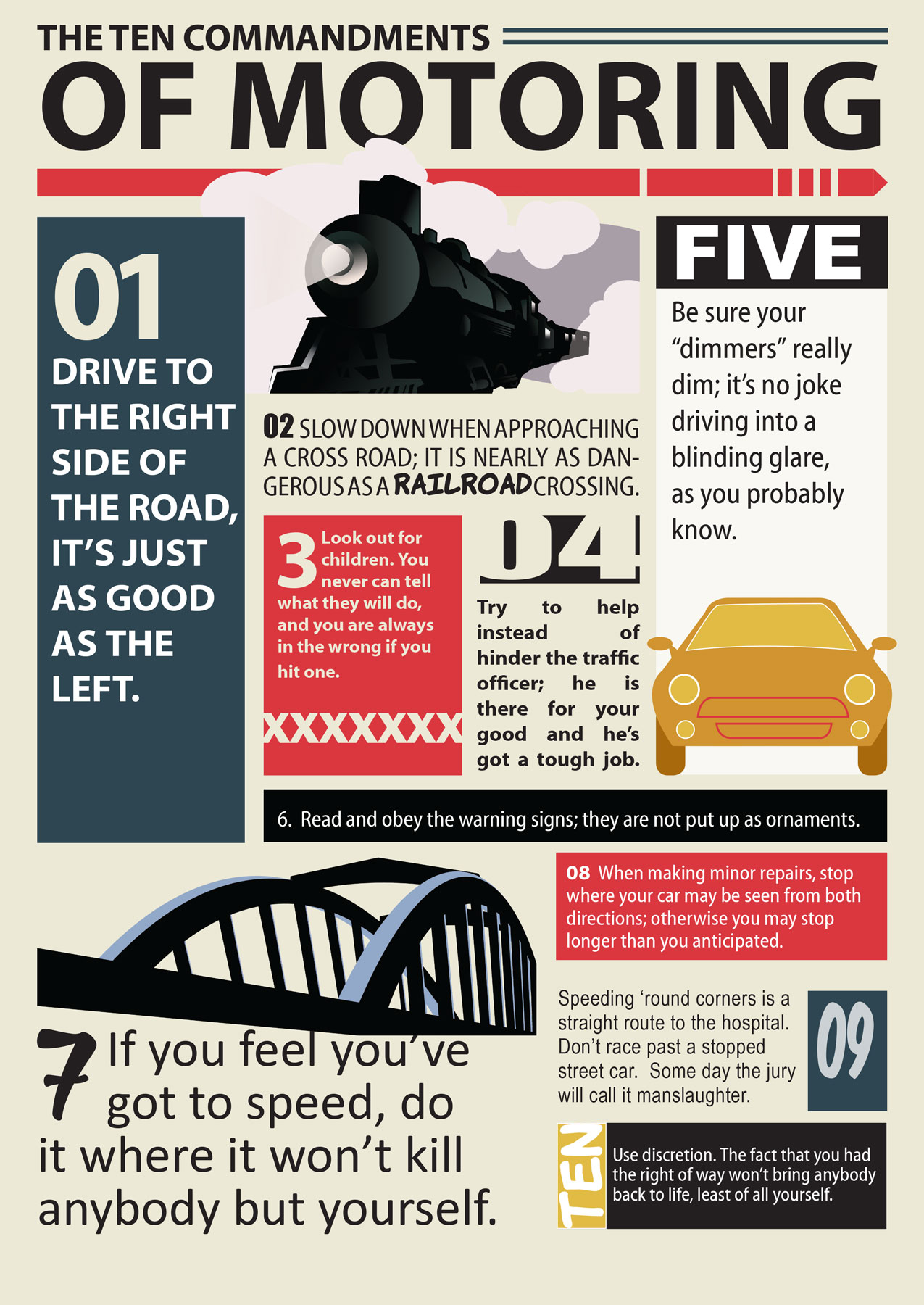 Document 8: In 1925, the North Dakota Highway Department issued the Ten Commandments of Motoring. The rules seem surprising to us today (“speed . . . where it won’t kill anybody but yourself”), but they were important reminders in the days before the highway patrol was organized. The original document was re-imagined by artist Jessica Rockeman, SHSND.

By 1921, cities all over the country were training pedestrians to watch for cars. Some cities started “jaywalking” campaigns. The word “jay” was commonly used to describe a rural person who didn’t understand city ways. Cities were purposefully labeling people who crossed streets without looking for traffic as “country bumpkins.” To promote new ideas about pedestrians and cars, cities asked the Boy Scouts to stand at street corners and hand out fliers to encourage pedestrians to wait for an opening in traffic, or wait for the light to change. (See Document 9.) By the 1930s, cars controlled city streets and “jaywalkers” had learned to watch for traffic.

Image 21: Urban services such as ambulance and firefighting were much improved with motorized vehicles. This ambulance, owned by Bismarck Hospital, could move an injured or sick person to the hospital in greater comfort and with far more speed than a vehicle pulled by a horse.SHSND 0277-053

Image 22: Homeowners who purchased automobiles built sheds to house their cars or purchased garage kits. This garage was built in Bismarck from a kit made by Rusk Auto House Company of Fargo. It now stands in the State Museum.SHSND B0649