Horses evolved in North America. They went through many stages, evolving from three-toed to one-toed and increasing in size to about the size of a deer. They were well-adapted to the grasslands of North America, but they disappeared from the continent around 10,000 years ago. Scientists do not know why horses disappeared. It may have been because of some ecological disaster, disease, over-hunting by humans, or all three. Paleontologists have discovered that some North American horses migrated westward and crossed the Bering Land Bridge into Asia where they prospered. Whatever the cause, there were no horses (Equus species) in North America from about 10,000 years ago until about 1520 A.D.

When Columbus made his second expedition to the Caribbean islands, he brought horses, but it is doubtful that any of those animals were released on the continent. In 1519, however, the Spanish explorer Hernán Cortés (1485-1547) brought horses into the southern Great Plains of the continental mainland. Horses had returned to North America, but they were now domesticated animals trained to work for humans.

Spanish explorers, missionaries, and rancheros kept horses for transportation, for beasts of burden, and for farm work. They closely guarded their horses and did not let American Indians own them. 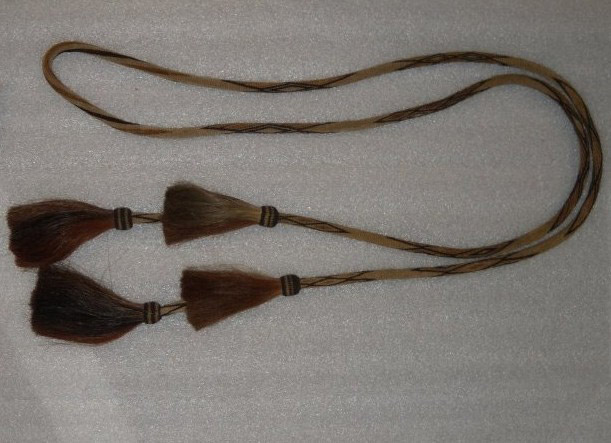 Image 1: This intricately braided rope, or horse rein, was made from red (sorrel), black, and white horse hair. It was probably used only for ceremonial purposes. This rope is in the collections of the State Historical Society of North Dakota. SHSND Museum 10934.

Many tribal historians believe that American Indians only rarely captured and trained wild horses. American Indians acquired horses in 1680, when Pueblo peoples, led by Popé, drove the Spanish from New Mexico and captured the horses left behind. Comanches, Utes, and Apaches captured horses and developed the skills they needed to ride and hunt on horseback.

Trade between tribes brought horses north from New Mexico. The Shoshonis (who now live in Montana) often made journeys south to trade for horses. Their trade involved more than horses. They also traded buffalo robes and other goods for bridles and saddles. Using the Spanish model, American Indians made their own bridles and saddles.

By 1700, a few horses had reached the tribes of the Upper Missouri River country. By 1750, horses had become incorporated into the life ways of Indian tribes and were part of a web of trading and raiding among the tribes.

Horses brought great advantages to Indian tribes. (See Image 1.) Hunters could travel farther to find bison herds. Horses added speed and efficiency to the bison hunt. They carried heavier and larger burdens than a dog or human could carry.

However, horses also brought disadvantages. Horses competed with bison for grass and water. Horses could go only where there was enough grass and water for the herd which limited the destinations of the nomadic tribes. They required grass or cottonwood tree bark for winter feed. Riders were occasionally injured by a fall from a horse.

Like metal goods and guns, horses arrived on the northern Great Plains in advance of non-Indian traders and explorers.  Though horses and other European trade goods brought many advantages, they were also a sign that white soldiers and settlers would soon follow.