The earliest “schools” during the North Dakota homesteading era were actually lessons taught in homes by the parents. As more homesteaders moved into an area, a group of neighbors would set up a school in one of their homes.

In 1883, the Dakota territorial legislature passed a law creating public schools. As towns were established, schoolhouses were among the first buildings to be constructed. In outlying areas where families had settled, one-room country schools began dotting the prairie. 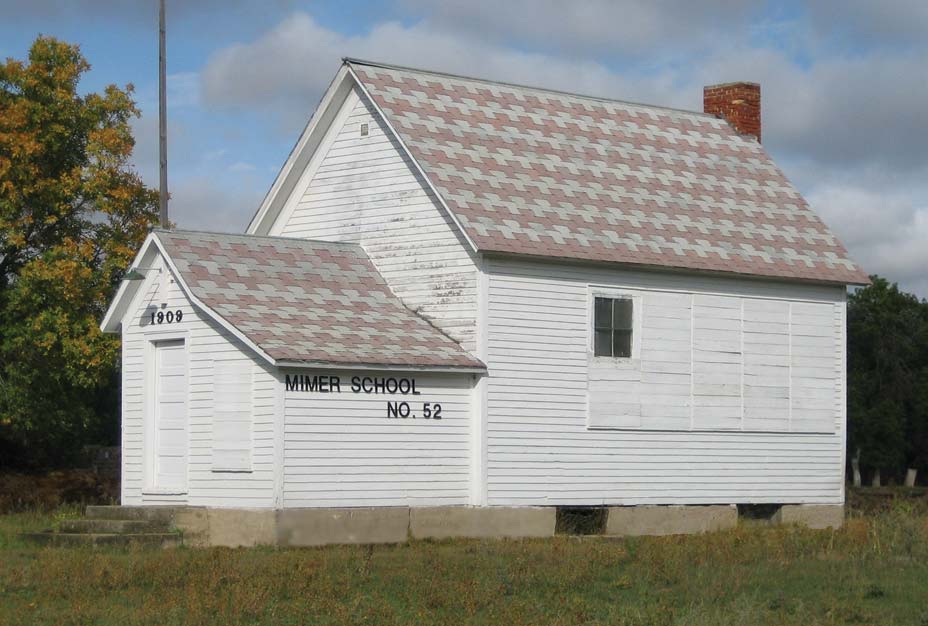 Most of the schoolhouses were frame structures painted white. These buildings were situated on land in areas where the most families lived. If the population shifted—for example, if a large family moved in or moved away—the schoolhouse could be moved a mile or two to a more central location.

When North Dakota became a state in 1889, it had about 1,400 schools. Of these schools, most were ungraded, which means that students were not placed in grades. Instead, each student worked at his or her own level. Many children did not attend school regularly because of work at home. When they returned after being absent for a time, they continued their studies where they had left off. A 16-year-old might be reading out of the same book as a 9-year-old. In the early pioneer days, the majority of the country schools were ungraded.

Most school terms ran between four months and six months. Some of the terms were split. For example, half of the term might be in the late fall after harvest had been completed and the other half in the early spring before planting began. In a split term, no classes were held during the cold winter months.

During the early years of statehood, about half of the teachers did not have any teacher training and did not have teaching certificates. Sometimes, teenagers who taught school were not any older than some of their students. 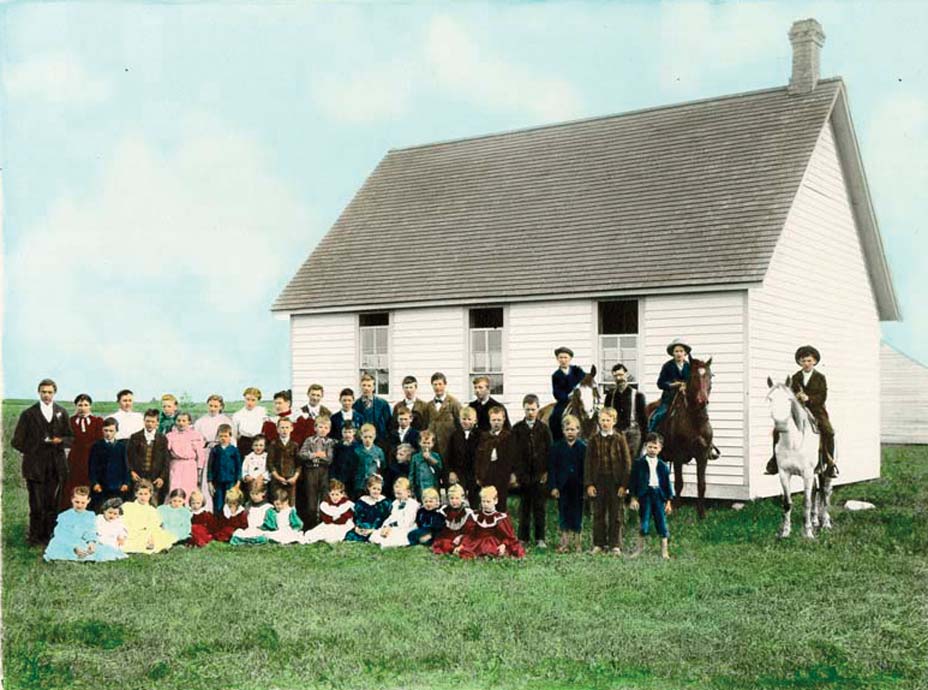 Later on, teaching certificates were required. In order to obtain a teaching certificate, the individual had to be at least 18 years of age and pass a “teacher examination.” This two-day written exam, taken in the county superintendent’s office, tested the person’s knowledge on more than a dozen different subjects. In 1906, there were 7,191 candidates who took the North Dakota teachers’ exam. Of these candidates, 3,725 passed and 3,466 failed. Those who failed the test were not given a teaching certificate, but they could retake the exam the next time it was offered. 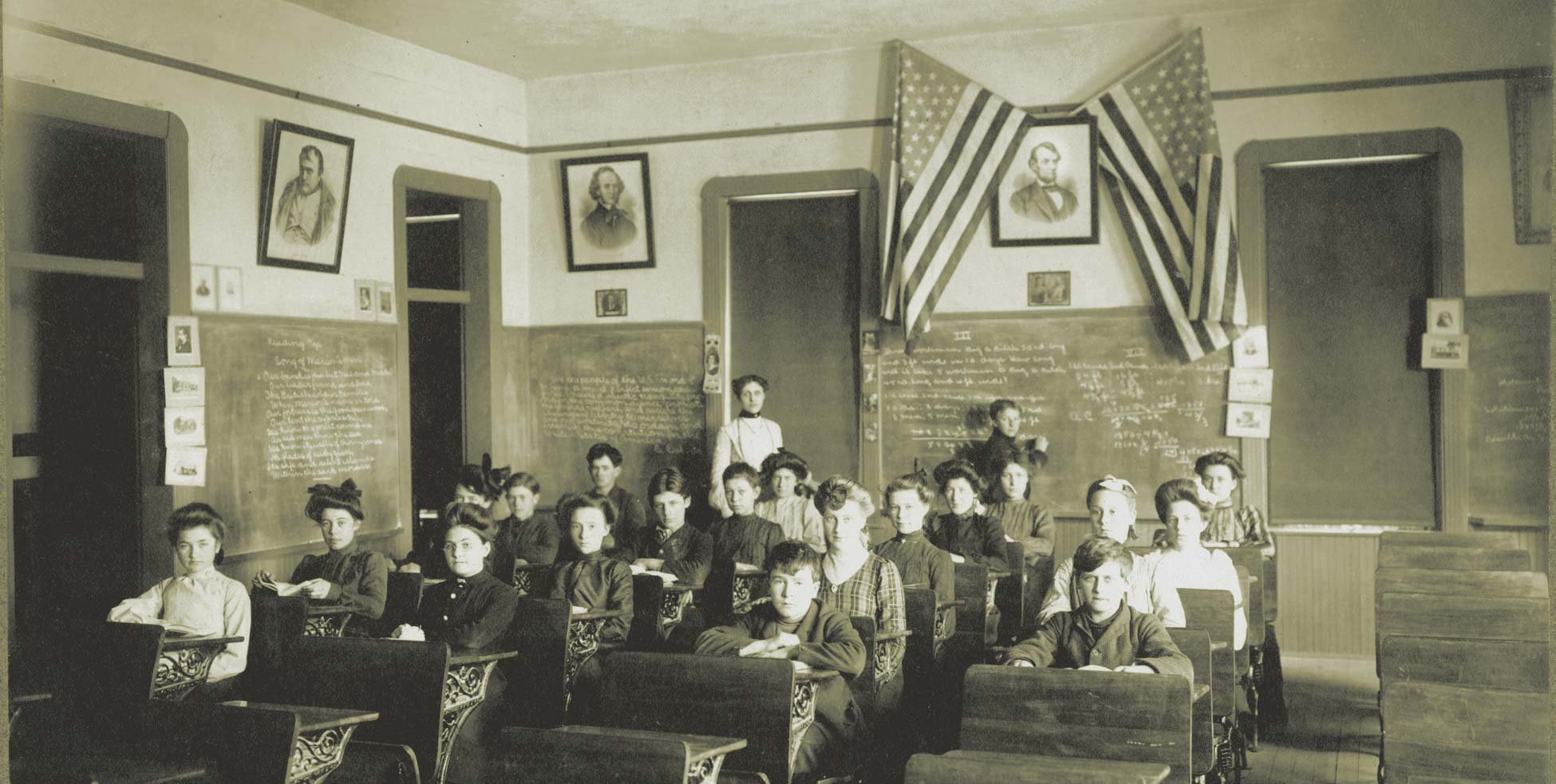 The language of the “old country” was spoken in the homes of most of the immigrant children; therefore, many students attending pioneer schools learned English for the first time when they started school. Sometimes the teacher would have older students translate the first reading book word for word, and have the beginners repeat the English words over and over. Adult immigrants sometimes also came to school in order to learn to speak and read English.

Teaching was not the only job of teachers in one-room country schools. When the weather was cold, it was the teacher’s responsibility to have the schoolhouse warm when students arrived in the morning. This required the teacher to go to the school early in the morning and build a fire in the school’s stove. The teacher also did the janitorial work such as dusting, sweeping and scrubbing the floor, washing the blackboards, and keeping the outhouse clean.

Pioneer teachers were required to follow certain rules and could be fired if they broke the rules. Examples included conducting themselves in a proper manner, going to bed early, no smoking or drinking alcohol, and no dancing. Married women were not allowed to teach. If a woman teacher became engaged or got married, she had to quit teaching.

If teachers did not live close to the schoolhouse, they “boarded” with families of the students. This means the teacher lived with a family and ate meals with them. Sometimes one family would board the teacher for the full term, but more often the teacher would take turns boarding with different families.

Various means of transportation were used by country schoolteachers to get to their schools, travel to town, or make other trips. Walking or riding horseback was common, but many teachers rode bicycles, which was faster than walking and cheaper than keeping a horse. Many teachers rode long distances by bicycle. For example, one teacher rode 75 miles to the county seat to take her state teachers’ exam and then rode the 75 miles home again on her bicycle.

By 1910, North Dakota had more than 8,000 schools. Some of these were town schools consisting of two or more rooms. This meant that well over 8,000 individuals were employed in the field of teaching. Most of the teachers were women. Some of them stayed in the teaching profession for many years, but others quit teaching to get married and raise their own families. Teachers were often paid less than $40 for the school term. 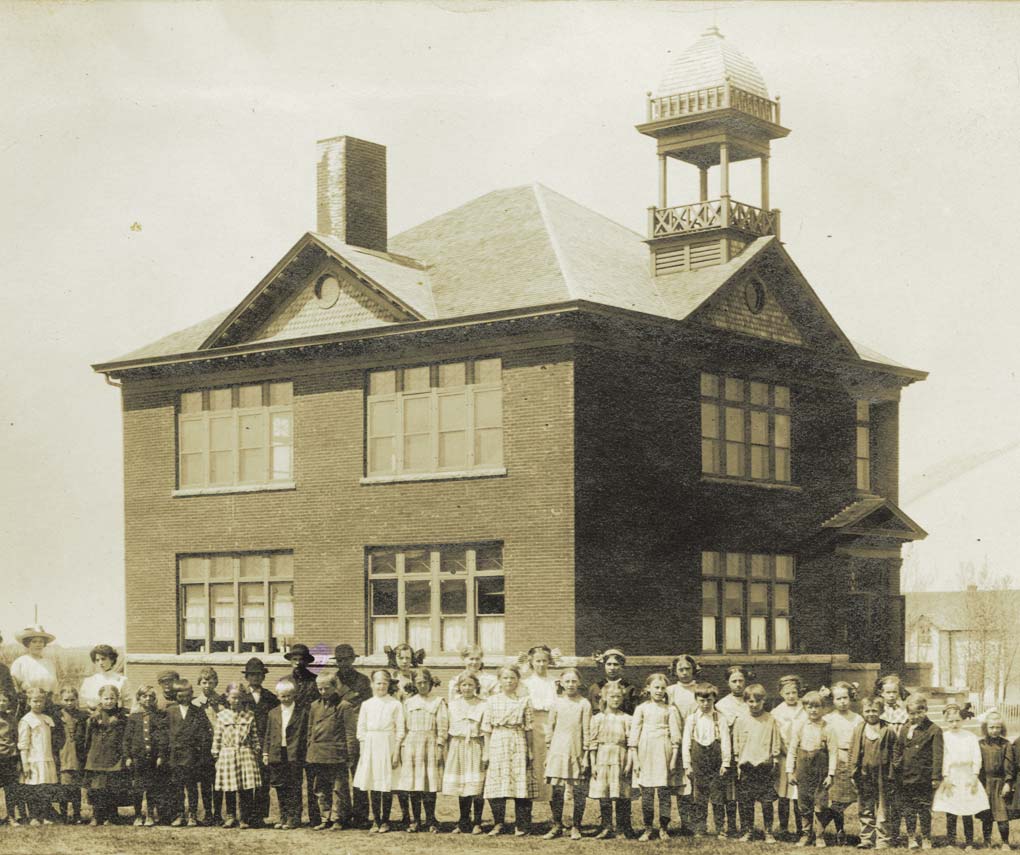 Children attending school in town usually got a better education than those attending country schools. The town teachers generally had more college training, and many towns had high schools. Town students usually did not have to miss school to work at home, and the school term continued through the winter.

A major highlight of the school year was the school Christmas program. The whole community would look forward to this affair in which students put on plays, recited poetry and other pieces, and sang Christmas songs. At the end of the program, “Santa Claus” would appear to distribute apples or candy to the students and audience members. This event either marked the beginning of Christmas vacation or the end of the first part of a split term.

Other events were held that involved community members also. In the spring, the end of the school term was celebrated by a picnic attended by the entire community.