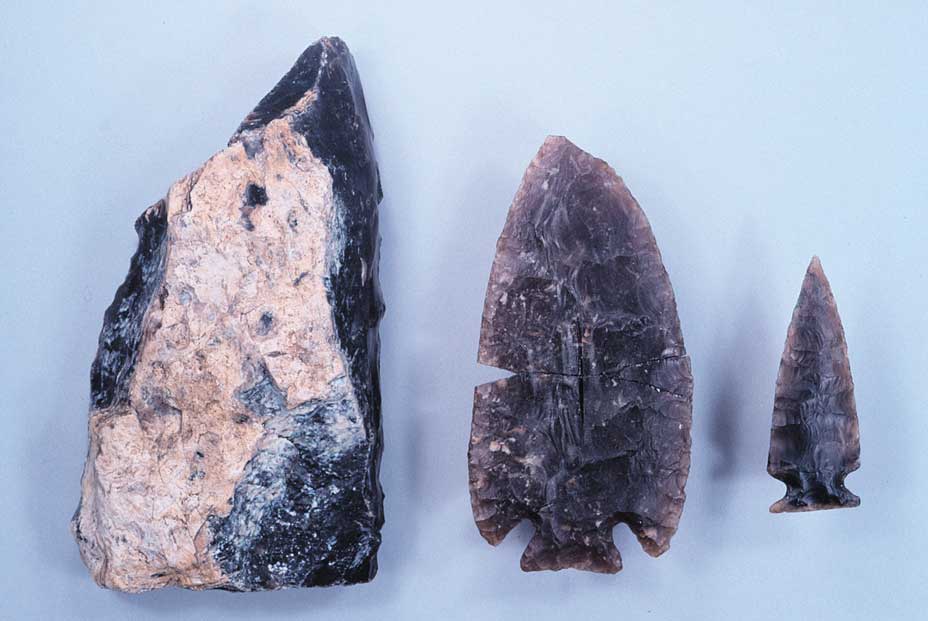 About 1,000 years ago, other groups of people began moving into what is now North Dakota. Most of the Plains Village people were descendants of the Woodland people and had lived on the plains for a long time. The people of the Plains Village era raised crops. They lived in permanent houses in a village or small town.

The Mandan were the first Plains Village group to become a modern Indian tribe. This group of people settled along the Missouri River in North Dakota about 900 years ago. They had followed the Missouri River up from Iowa, southern Minnesota, and South Dakota.

The Hidatsa group moved from the forests of Minnesota to eastern North Dakota about 500 years ago. They continued moving west, and about 400 years ago settled near the Mandan people along the Missouri and Heart Rivers. Their way of life was similar to that of the Mandan. They lived in the same kinds of homes, raised the same kinds of crops, and sometimes hunted together. The Arikara (Sahnish) people, who came later, were from farther south and did not descend from the Woodland people.

Figure 12. Drawing by Sitting Rabbit of the high village of the Mandan, called Mi-Ti-Was-Kos. The village consisted of about 30 earthlodges. (SHSND 800)

Gone Are the Old Ways

I am an old woman now. The buffaloes and black-tail deer are gone, and our Indian ways are almost gone. Sometimes I find it hard to believe that I ever lived them.

My little son grew up in the white man’s school. He can read books, and he owns cattle and has a farm. He is a leader among our Hidatsa people, helping teach them to follow the white man’s road.

He is kind to me. We no longer live in an earthlodge, but in a house with chimneys, and my son’s wife cooks by a stove.

But for me, I cannot forget our old ways.

Often in summer I rise at daybreak and steal out to the corn fields, and as I hoe the corn I sing to it, as we did when I was young. No one cares for our corn songs now.

Sometimes in the evening I sit, looking out on the big Missouri. The sun sets, and dusk steals over the water. In the shadows I see again our Indian village, with smoke curling upward from the earthlodges, and in the river’s roar I hear the yells of the warriors, and the laughter of little children of old.

It is but an old woman’s dream. Then I see but shadows and hear only the roar of the river, and tears come into my eyes. Our Indian life, I know, is gone forever.