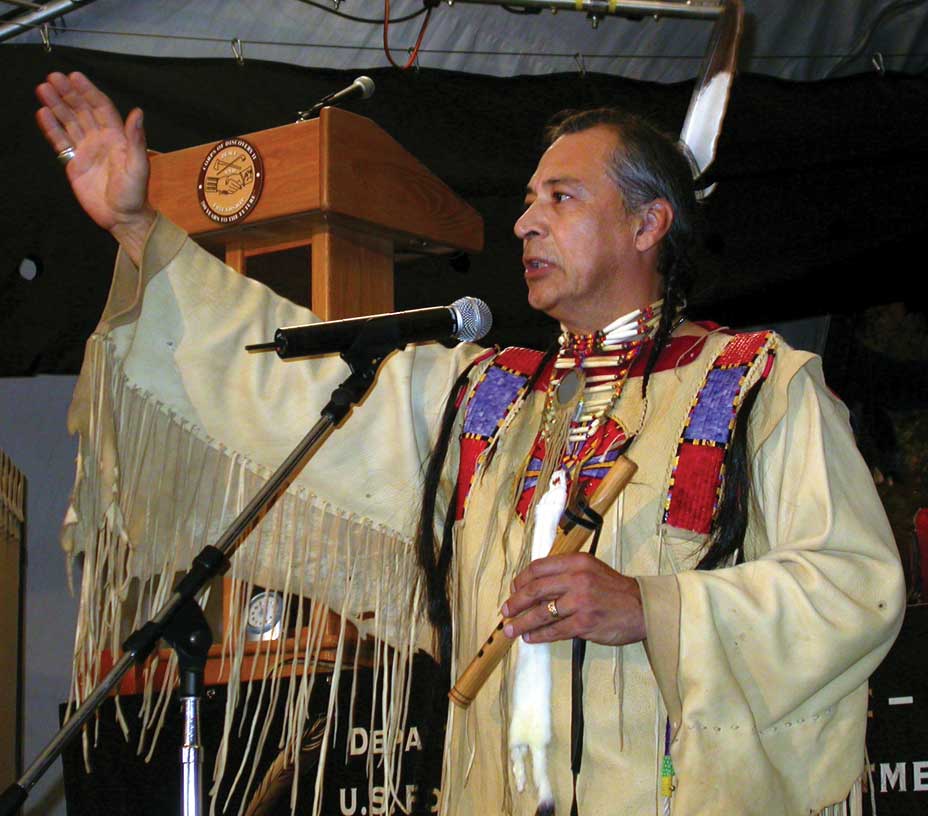 Keith Bear, a member of the Three Affiliated Tribes, is a flute player known all over the world. He uses his flute to tell stories.

Keith started his life being raised by his mother and relatives in the Sioux and Mandan cultures. Before he started first grade, he was placed in a foster home, and between the ages of 6 and 12, lived in 14 different non-Indian foster homes.

After Keith grew up, he was working in the Wyoming oil fields. Another worker carved a flute out of wood and gave it to him. Keith carried this flute around for two years before he got interested in playing it. At that time, he had a drinking and drug problem and did not know what he wanted to do with his life.

One day, Keith realized that he wanted to change his life. He took his flute out to a hill and stayed there for three days and three nights while he sobered up for good. As the wind blew through the flute, it made a low tone, and the rustling leaves added to the sound. Keith thought this was a gift from the Creator.

When he came down from the hill, Keith started playing his flute. At first, only sour‐sounding notes came out, but the more he practiced, the better it sounded. After about a week of steady practicing, he played his first song.

Keith’s uncle taught him how to carve his own flutes, and over the years, Keith has made many different kinds, each with its own special sound. He is also a storyteller and sometimes dresses in his regalia when he performs. He has played music with many famous orchestras, including the National Symphony in Washington, D.C.

Keith has proved that even if people have not had the best of childhoods, they can turn their lives around if they want to. Today, Keith Bear is famous, not only in the United States, but also throughout many parts of the world. He has won awards for his music and performances, and he has also acted in a movie. He believes that all humans were created by the same Creator, and everyone has a connection with everyone else. Flute music is the wind that breathes life into the heart.